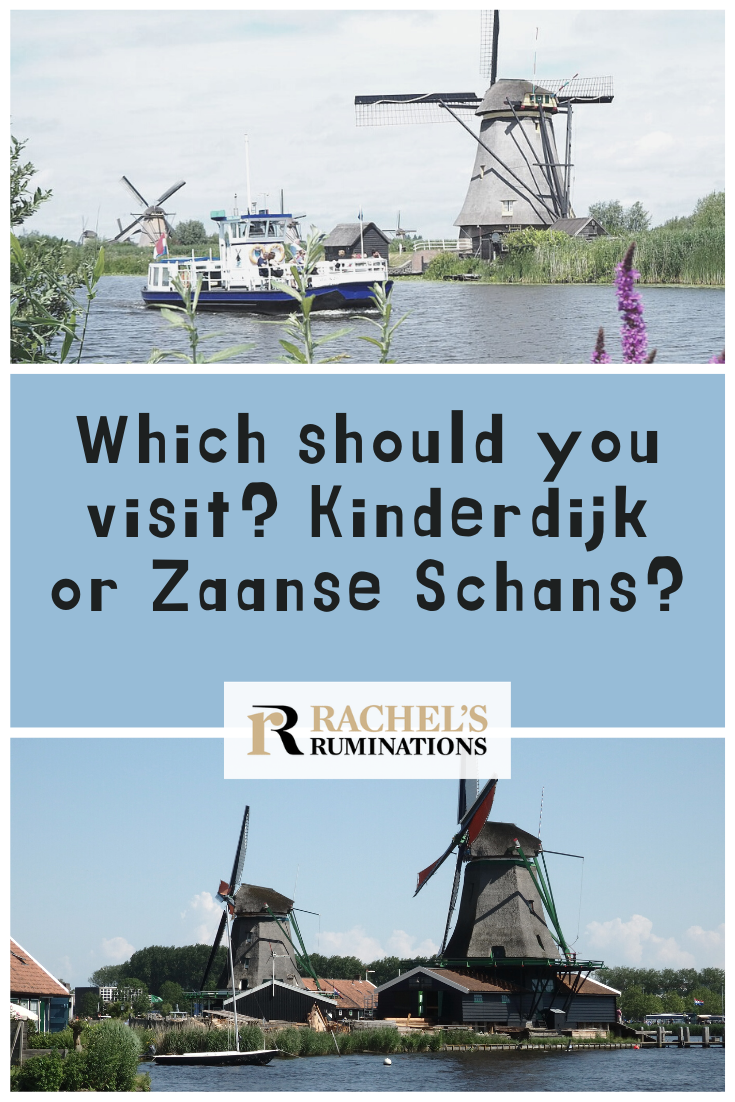 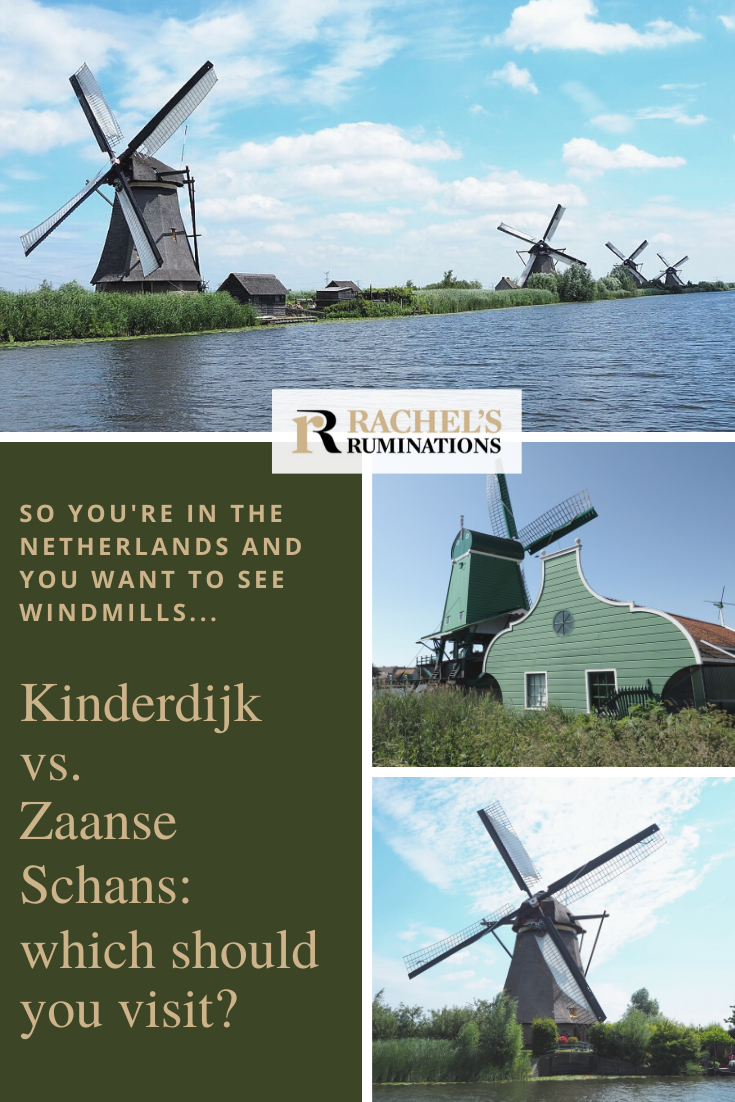 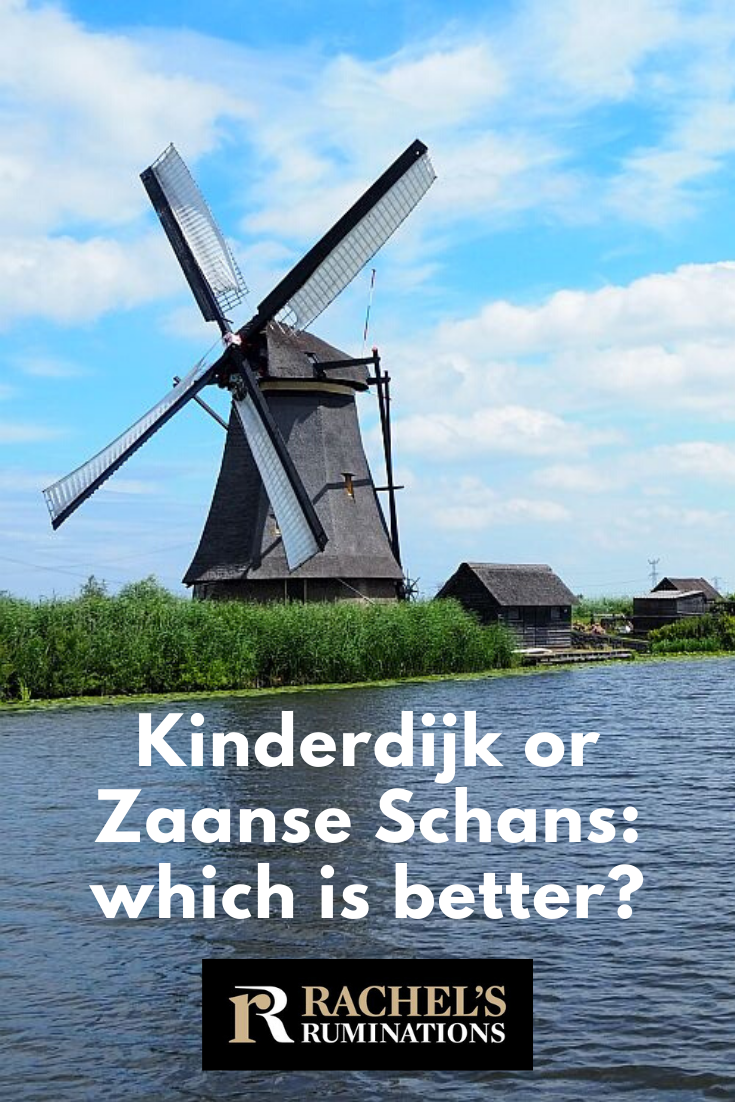 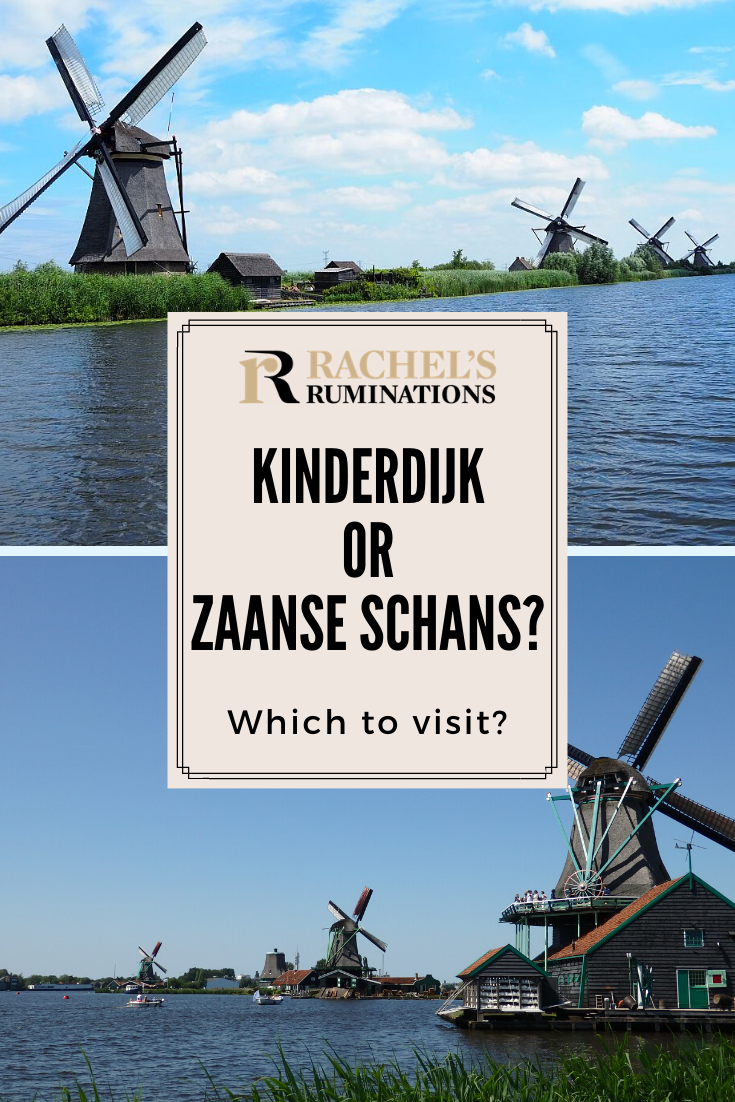 You’re visiting Holland, so of course, you want to see windmills. While windmills dot the countryside all over the Netherlands, Kinderdijk and Zaanse Schans are two popular places for viewing windmills and seeing inside them.

I wrote about a visit to Zaanse Schans a couple of years ago. North of Amsterdam, Zaanse Schans has a collection of six windmills along the Zaan River, as well as five small museums. You can read my Zaaanse Schans article here.

Disclosure: This article contains affiliate links. If you click on any of them and make a purchase, I will receive a small percentage of what you spend. This will not affect your price.

Below I’ll give you a description of Kinderdijk, along with a comparison of the two, in case you only have time for one or the other.

First, though, go read what I wrote about Zaanse Schans, then pop back here for the rest.

Kinderdijk is a UNESCO World Heritage Site because the “outstanding contribution made by the people of the Netherlands to the technology of handling water is admirably demonstrated by the installations in the Kinderdijk-Elshout area.”

In other words, what is celebrated here is a manmade environment: 19 windmills plus pumping stations and sluices, all used to create fields (called polders, which indicates land that is reclaimed from the sea) and to keep the land from flooding.

All of this industrious reshaping of land and water to suit humans’ needs makes for a lovely environment today. Widely-spaced windmills line the waterways. The 10 Overwaard ones, on the left as you enter, are octagonal, made of wood and covered in thatch. The 8 mills on the right are the Nederwaard row, made of brick. All were built in the mid 1700s. There is also one smaller hollow post mill called Blokweer, dating to 1630.

All of the mills are still in working order, and most serve as homes to this day. A few of the families have been millers for generations. Anyone living in one of these monuments commits to maintaining it and operating it a certain number of days per year. Modern pumps (steam, then diesel, then electric) have replaced them in function, though they can still be helpful if the modern systems fail.

Inside the Kinderdijk windmills

Only a few of the mills are open to visitors at Kinderdijk, which makes for some crowds.

The Nederwaard museum mill is furnished inside as it was when a miller named Hoek operated it and lived inside it, along with his wife and 13 (!) children.

In the Overwaard museum mill, (not always open) you can learn more about how a scoop pump mill works.

The Blokweer museum mill and the yard around it looks at the life of a miller in the 1950s.

Also at Kinderdijk are more modern pumping stations and displays explaining how the land was created and how pumps continue to keep it dry.

The windmills are quite spread out along the waterway. Small boats ferry passengers across or from one end to the other, and the views from the water are definitely worth the boat ride.

From Amsterdam it would be easiest to take a group or private tour. Take a look at any of the Kinderdijk tours at this link.

If you’ve rented a car, you can drive there in about an hour and a half from the center of Amsterdam (barring traffic jams). There are ways to get to Kinderdijk via public transportation from Amsterdam but none of them is straightforward and they all involve changing trains/trams more than once.

From Rotterdam Zuidplein you can take bus 190 to Kinderdijk. To get to Zuidplein, take metro D from Central Station. Alternatively, you can take the Waterbus from Erasmusbrug during the summer. The rest of the year you’d get off at Ridderkerk and catch the Driehoeksveer ferry from there.

Tickets cost €11 at the entrance or €9 through the Kinderdijk website. This includes the museums and a boat ride.

You might also enjoy this article I wrote about the Dutch and their attitude toward water: Watery Hubris.

While both Zaanse Schans and Kinderdijk can get quite crowded, it’s generally busier at Kinderdijk. Since only a few of the mills are open to visitors, you may have to wait in line to enter, as I did, after busloads of tourists.

In both places there are ways to avoid the worst of the crowds: go early in the morning, or go straight to the furthest end where the crowds will be thinner. Towards the end of the day you’ll get fewer people in general and also have better light for your photos.

Number of windmills and authenticity

Kinderdijk is special because of the sheer number of windmills (19) and the fact that they are still in their original place and used for their original function. Zaanse Schans, on the other hand, has only six windmills, and only two were originally there.

Use booking.com to book your accommodations in the Netherlands!

On the other hand, at Zaanse Schans you’ll see more variety: a mustard mill, two sawmills, a paint mill, and two oil mills (flaxseed and peanut). Each has a different architecture as well and their age varies too. At Kinderdijk, the mills all do the same thing: move water off lower land into higher bodies of water.

At the same time, you will only learn about land reclamation and water control – an extremely serious topic in a country that is largely below sea level – at Kinderdijk, not at Zaanse Schans.

In both places, the mills are in working order, and you’ll be able to see them in operation if you visit on a weekend and there’s enough wind.

Kinderdijk is about two hours south of Amsterdam and one hour from Rotterdam. Zaanse Schans is about a half hour north of Amsterdam, making it an easier, quicker trip if you’re visiting Amsterdam.

If you’re going to spend time in Amsterdam, check out my series on museums in Amsterdam before you go!

So, will it be Kinderdijk or Zaanse Schans?

Despite the fact that Kinderdijk is UNESCO-listed and Zaanse Schans is not, I prefer Zaanse Schans. While both places are pleasant to visit and offer pretty views, I like the variety at Zaanse Schans, and the opportunity to enter more windmills (when they’re open) and even see them in operation.

Have you been to either one or both? Tell me about your experience in the comments below!