Polish food doesn’t have the excellent reputation of, say, French cuisine or Thai cooking. Frankly, it’s not something I ever really thought about. So when I traveled to Krakow for an influencer conference and was offered a place on an Urban Adventures Krakow food tour, I figured, “Why not?” I had minimal expectations of the food in Krakow. (Disclosure: I took the tour for free, but the opinions below are my own.) 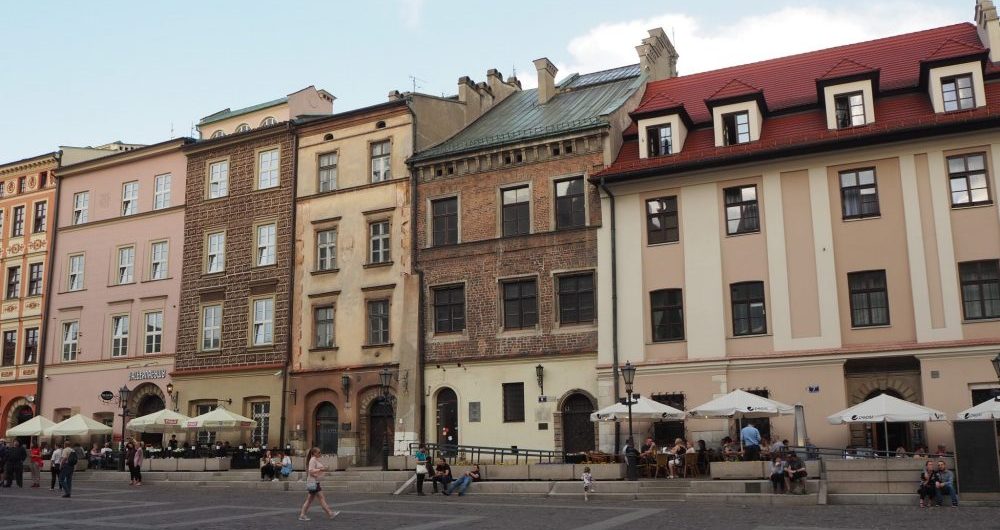 The market square called Mały Rynek in Krakow. Our starting point was in front of the pink building at the left end of the picture.

It turned out to be an enjoyable evening of good food and pleasant company. I’m still not a big fan of the food in Krakow, but it was good to learn about it, and I made friends with several other influencers along the way.

Led by Monika, our very enthusiastic and energetic guide – I swear she didn’t stop talking the entire three-hour tour! – we visited four different eating establishments. The idea was that the stops we made – four in all – would show us the highlights of traditional food in Krakow, and we’d see a bit of the city while we were at it.

Our first stop was at a bar called, of all things, Bonobo. I have no idea why the bar has a bonobo monkey theme, but in any case it was a place I never would have found by myself, with an entrance in a sort of hallway off of Mały Rynek, a small picturesque square in the old town of Krakow. And I never would have known what to order.

Monika sat us down at several tables and disappeared, returning with a plateful of, of all things, bagels. She explained that they aren’t bagels; they’re obwarzanek, a small braided bread ring. They sure looked and tasted like bagels to me! I’d seen them being sold on the street from carts, and, Monika explained, they are eaten plain, without butter or cream cheese or whatever. They’re covered with sesame seeds, poppy seeds, salt or cheese. Like bagels, they are boiled, then baked.

Disappearing again, Monika soon returned with a tray of oscypek, a smoked, quite salty sheep’s cheese. Oscypek is made in only one mountainous region of Poland and is pressed into various decorative shapes before being soaked in brine, then smoked. I found it quite tasty, if rather plain. I can see why bars would offer these, since the salt makes visitors thirsty, so they’ll buy more beer. 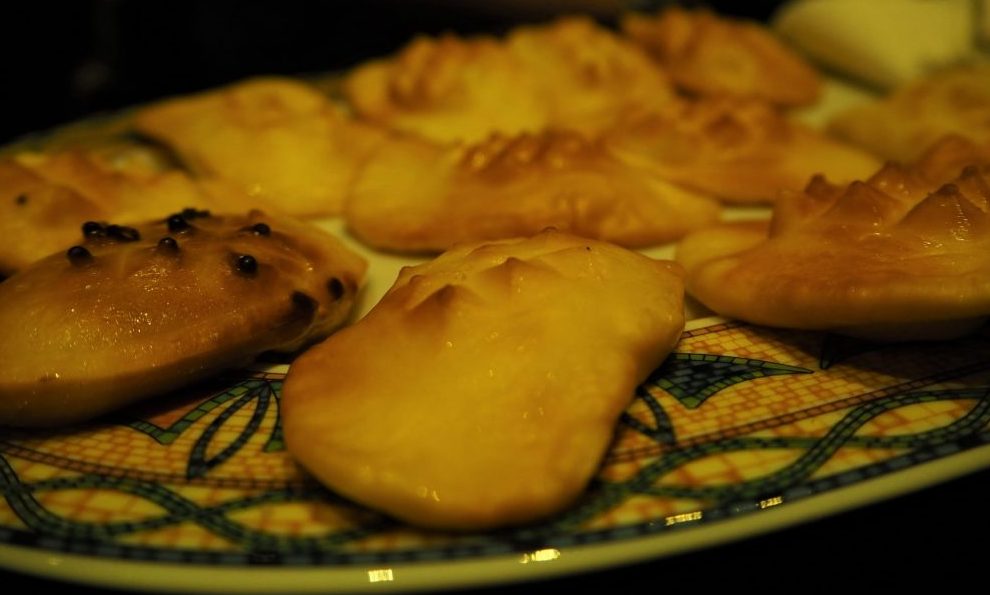 Our oscypek were accompanied by tastes of several different local beers. I’m not a beer drinker at all, but one of them was really quite palatable, mostly because it tasted more like a liqueur than a beer.

Monika kept up continuous commentary while we tasted everything, telling about the food, the beer, the bar, and Krakow’s history.

Our next stop was a restaurant called Polskie Smaki, which specializes in traditional Polish food. Its contribution to our food tour was the soup course.

Before we could have the soup, however, we had to choose which we wanted. That meant that each of us received three small mugs of soup: a tomato soup, a beet soup similar to borscht, except that it was hot, and a soup unlike any one I’ve ever tasted before, called żurek. It’s made, according to Monika, by fermenting grain (traditionally rye) for a week, then adding the other ingredients, including bits of meat. 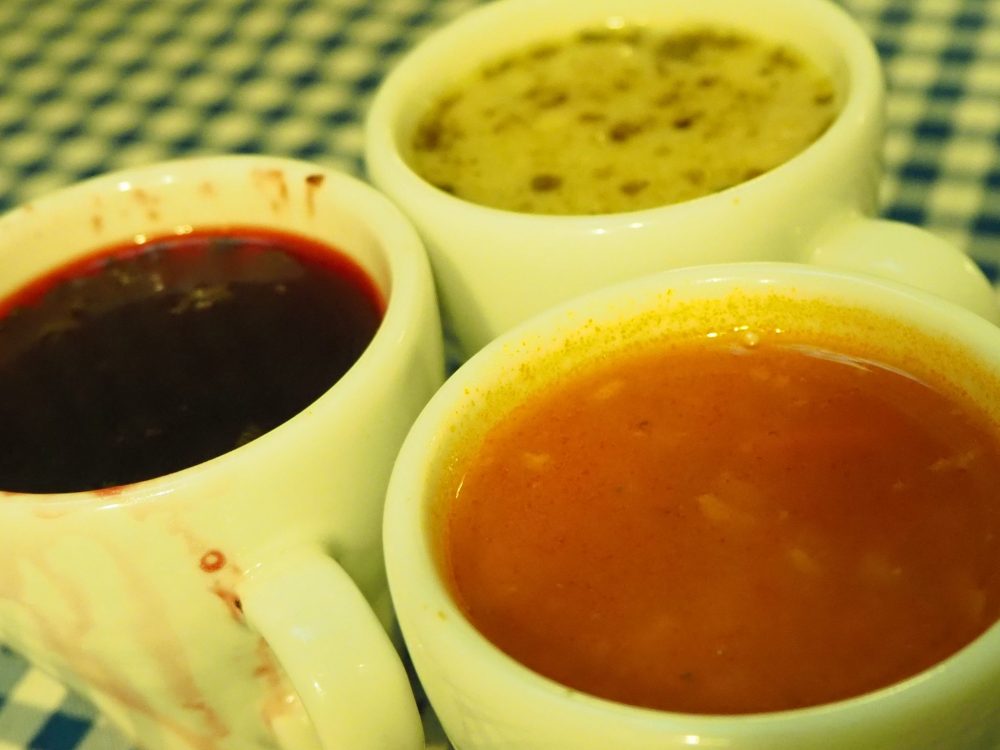 They were all good, but I chose the żurek. It was salty and sour, unusual but flavorful. Once we’d chosen, we all received a full-sized bowl of soup.

Monika, meanwhile, explained about Polish soup: how it is a peasant food, and how there are hundreds of different kinds, since soup is made from whatever is available at the moment.

Already feeling full after the bagels, cheese and soup, we headed to the Jewish quarter of Krakow, just a few stops away on the metro. Leading us to a small restaurant (again, one that I never would have found on my own) called U Dorothy, which translates as Dorothy’s Place, Monika seated us at a long table and a mug of kompot soon appeared in front of each of us. Kompot is a drink made from stewed fruit: quite sweet and flavorful, like a fruit nectar. Ours was made with pears and/or peaches, I think.

The main attraction here, though, is pierogi, probably the most well-known Polish food. These are boiled dumplings with a variety of fillings. We shared three types: meat, vegetables, and potato, I think. They were smaller than the Russian version I’ve had before, and less heavy. They reminded me mostly of ravioli. 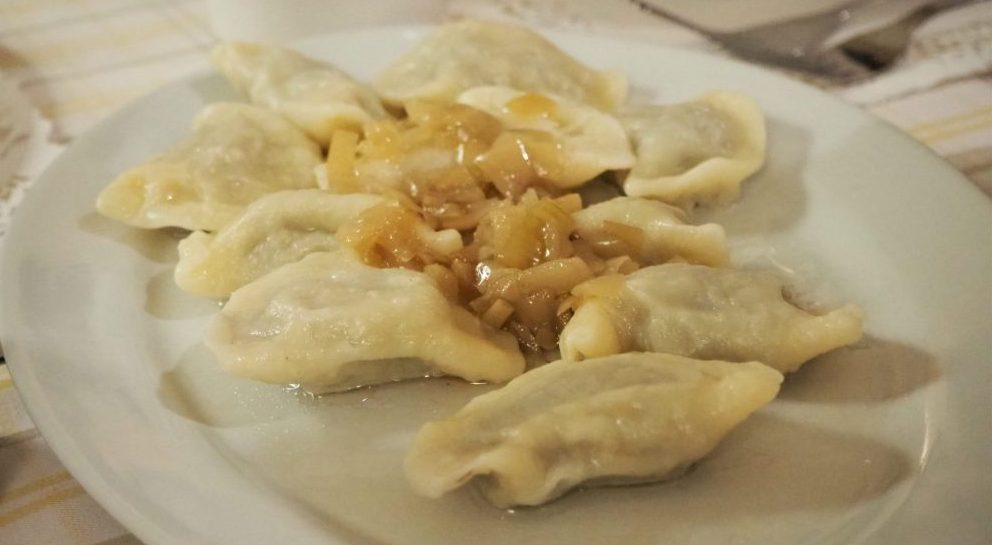 A plate of pierogi, with a bit of onion for sauce.

Again, Monika explained about pierogi, how they’re made, and all the possible fillings. Another peasant food, they are intended to be filling.

After we’d eaten far too many pierogi, another plate appeared. These pierogi were filled with strawberry, of all things: very tasty.

And speaking of sweet food, next to the pierogi, we also enjoyed crispy placki ziemniaczane: potato pancakes. Served with a sprinkle of sugar, these were pretty much exactly the same as the latkes we ate when I was a child on Chanukah.

Leaving the restaurant, we walked through the Jewish Quarter, bustling with an evening crowd of diners at the many busy restaurants in the area. It would have taken a much longer walk, though, to work off all the food we’d already eaten. Monika stopped to show us an inner courtyard that was used as a set for the film “Schindler’s List.” 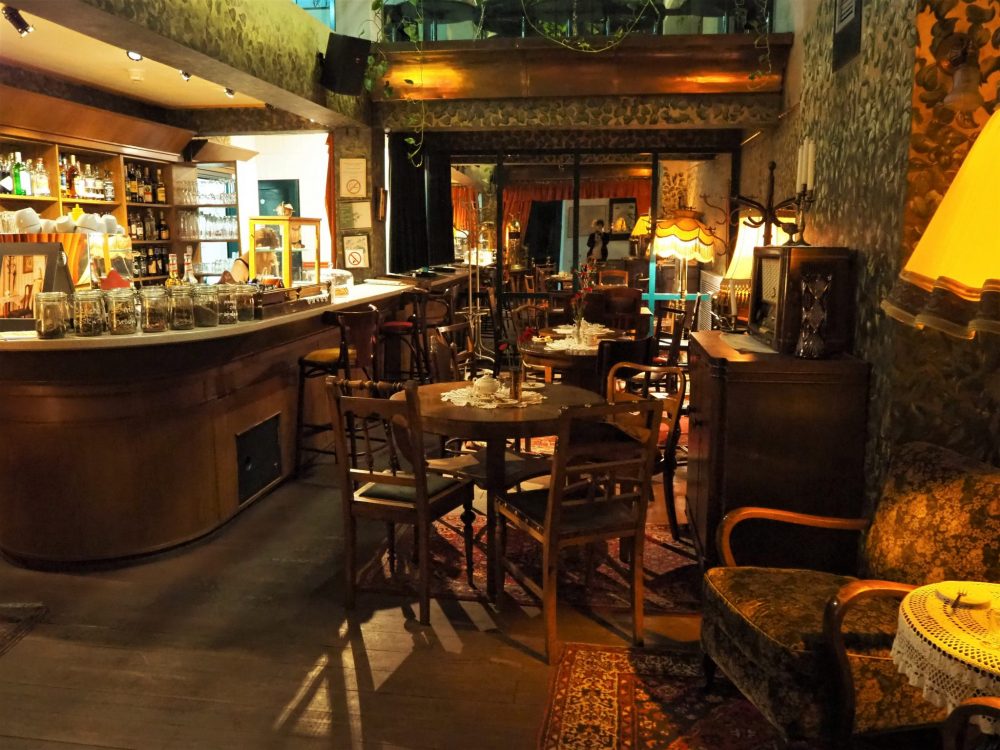 Our last stop was the Krakow Jewish community center. The building has a small open space inside, with balconies from the offices upstairs overlooking it. That open space has a café/bar and a scattering of tables and antiques of various sorts. It creates a lovely, cozy environment for a quiet drink and dessert.

Our dessert was orzechowiec, a gooey nut cake. And, unsurprisingly, it was paired with a shot of vodka.

You might also find these posts from my trip to Krakow interesting: 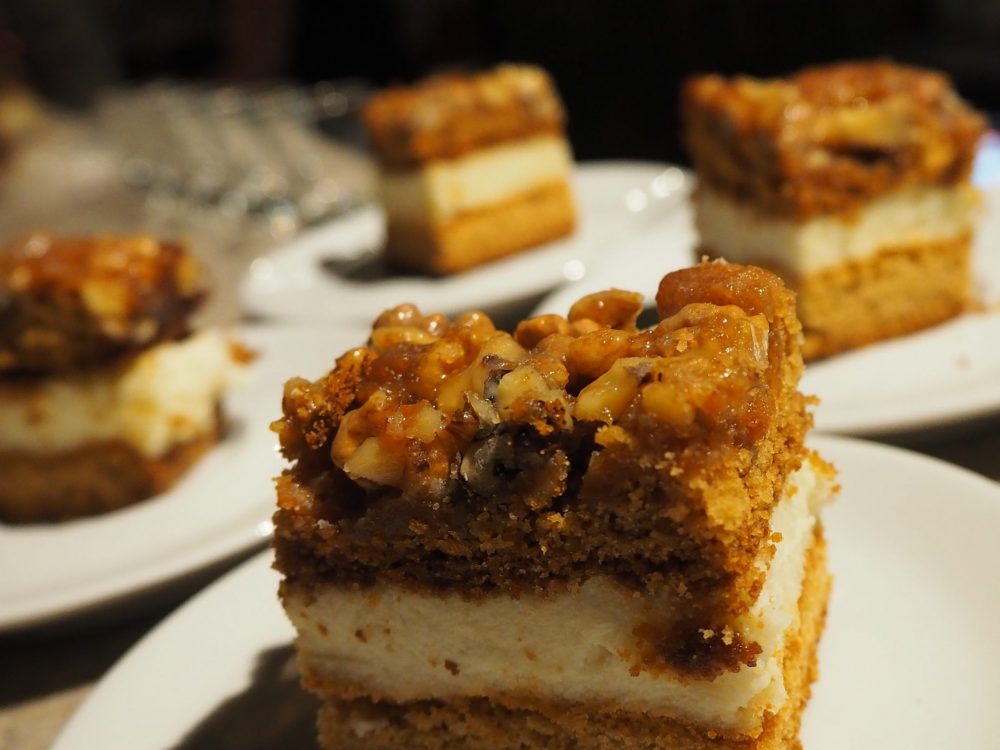 (As an aside, another Pole told me Poles don’t actually drink that much vodka. It’s more a Russian thing, she said. In Poland, people drink it for special occasions like birthdays and graduations, not every day. It’s served so much to tourists, in her view, because that’s just what they expect.)

But never mind, we finished the meal off with a shot of Bison vodka and an explanation from Monika about the Polish vodka industry. I have to admit, the vodka went down very smoothly. 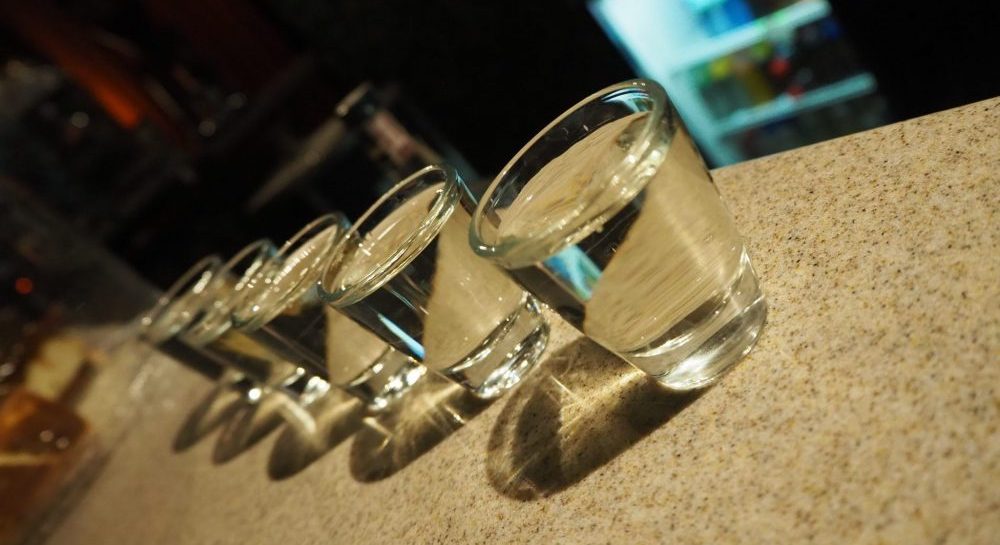 I’ve only ever taken food tours twice in my life, that I can remember. Once was in Bologna, and, being Bolognese food, it was wonderful. And the other was using an app called Bitemojo in Jerusalem, which had its own charms because I could go at my own pace.

It’s clear that this is something I should plan into more of my travel. In particular, it would be a good way to start off in a new city. It would offer a glimpse of the city at the same time as teaching a bit about the culture. After all, food is central to every culture. And Monika was well-versed in that connection, explaining it completely and clearly.

Urban Adventures runs lots of tours in lots of cities, both private and group. I took the Krakow “Food by Foot” tour, which costs €130 ($150) per person, with a minimum of two people to run the tour. It starts at 18:00, runs for three hours, and includes one beer and one vodka, as well as all the food.

Do you take food tours when you visit a new city? Are there any you’d particularly recommend? If you liked this article, please share it! The images below are formatted for pinning. 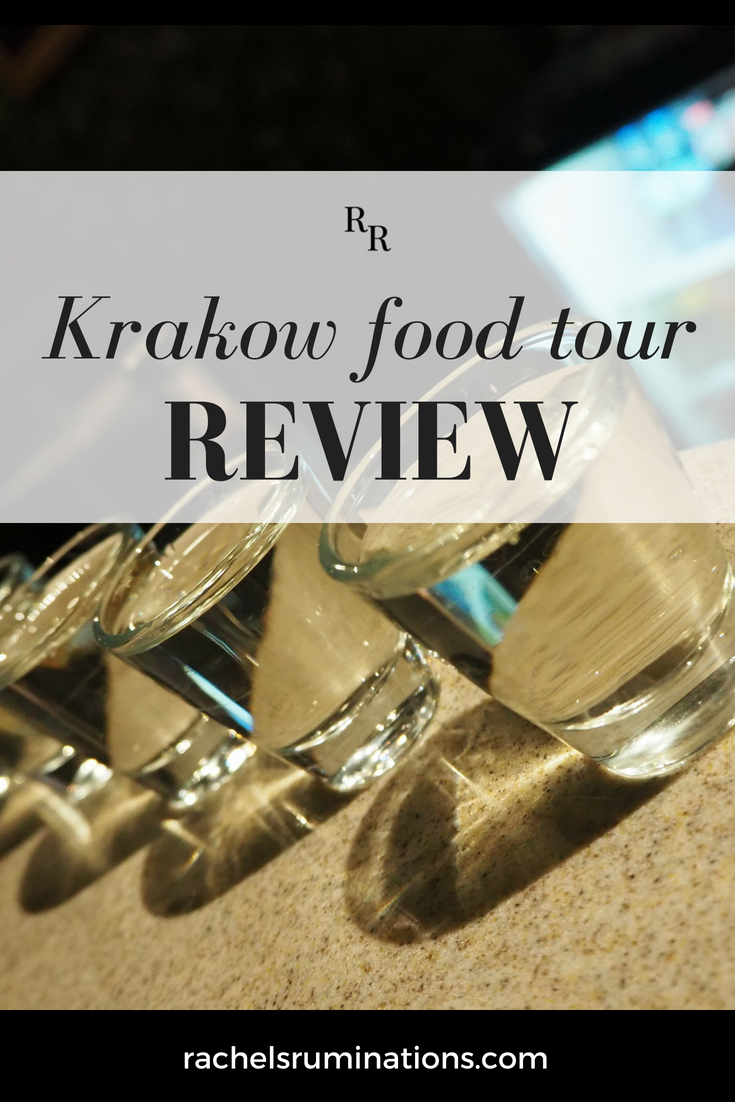 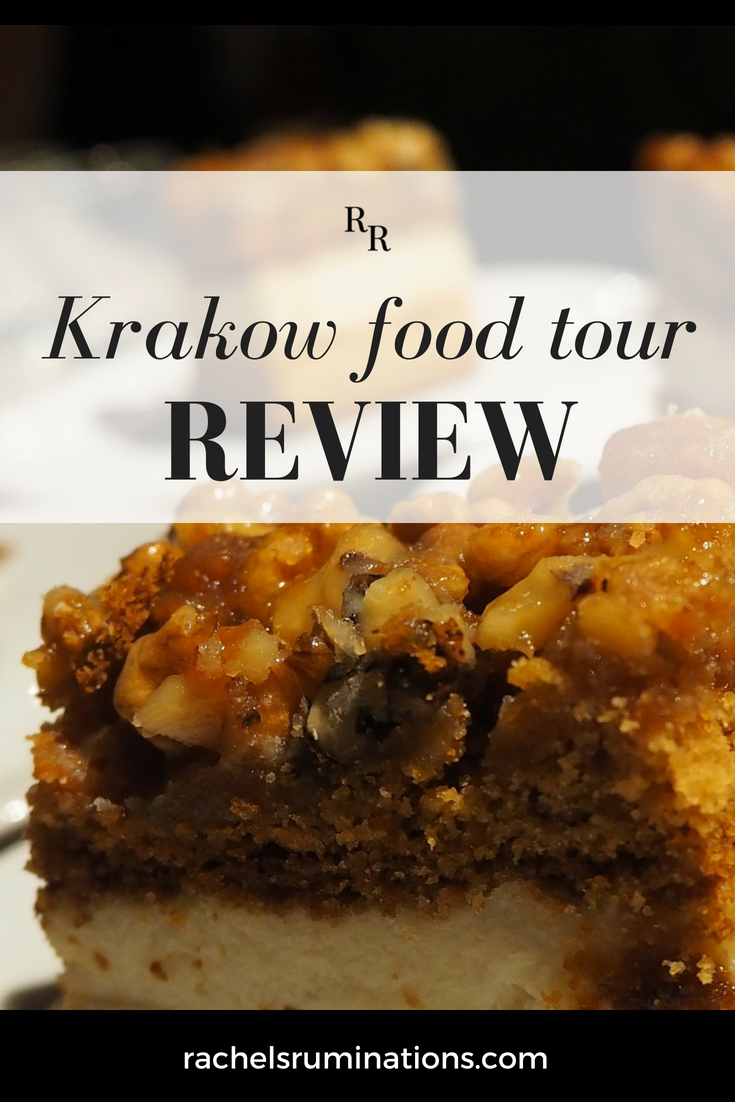 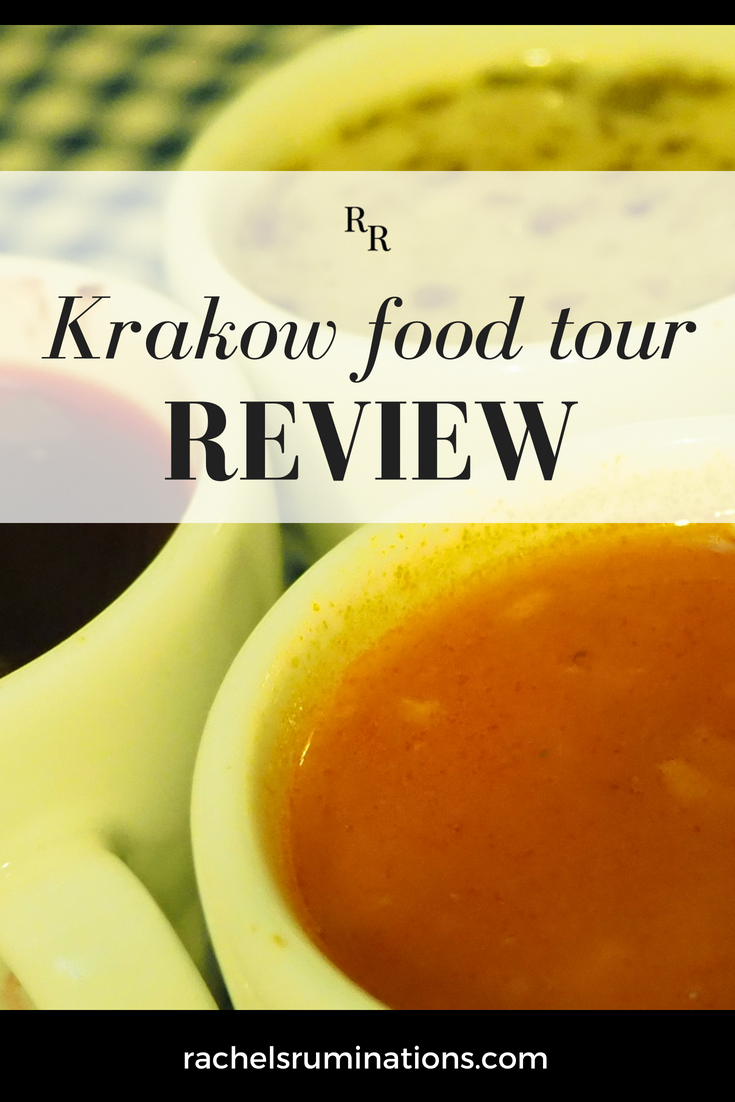