You wouldn’t think that touring a salt mine would be particularly interesting. I pictured tunnels carved into solid salt, and that was about it.

It turns out that the Wieliczka salt mine outside Krakow, Poland, is much more than tunnels carved into salt. It has a history all its own, and, surprisingly, it has artworks made of salt! 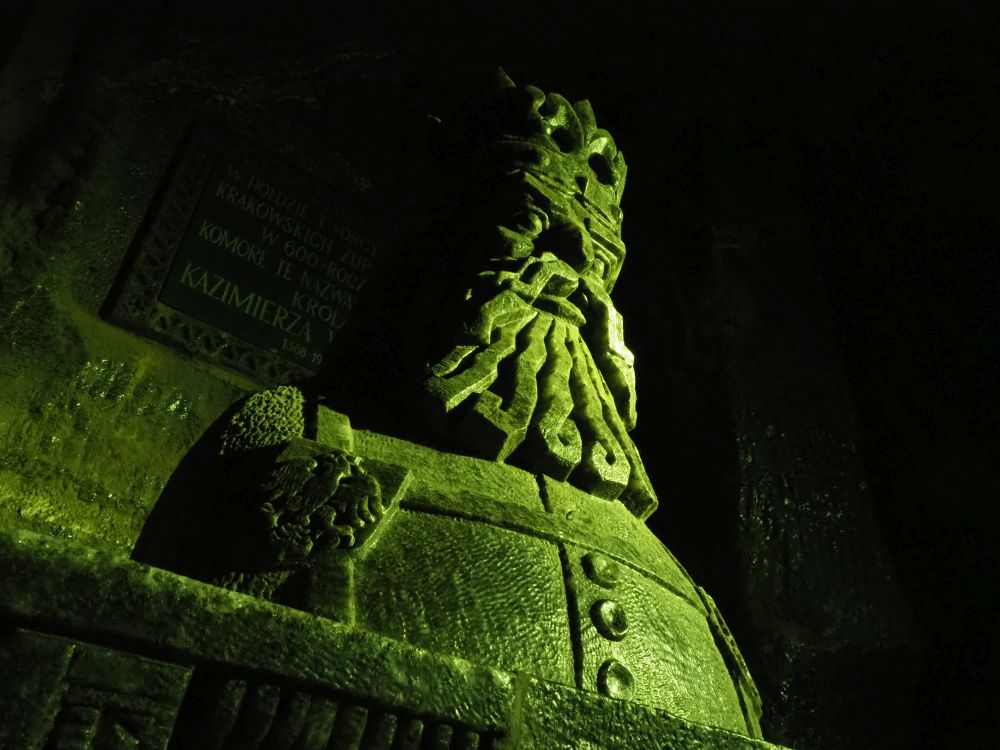 This sculpture in rock salt represents King Casimir III the Great, who ruled Poland from 1333 to 1370.

Disclosure: I received a tour of Wieliczka Krakow salt mine for free as a participant in the TIS Trablin influencer conference. Nevertheless, all opinions are my own. I have also included affiliate links within this article, which means I will get a cut of whatever you pay through those links.

History of Wieliczka salt mine

Salt was an extremely important commodity for Krakow starting from the 13th century, when rock salt was discovered there. Why was salt so important? Because people didn’t just use it to flavor food. In the days before refrigeration, salt was used to preserve food, so it could be stored for long periods of time. It was essential.

For that reason, the Wieliczka salt mine became the key to Krakow’s prosperity, and remained so for centuries. 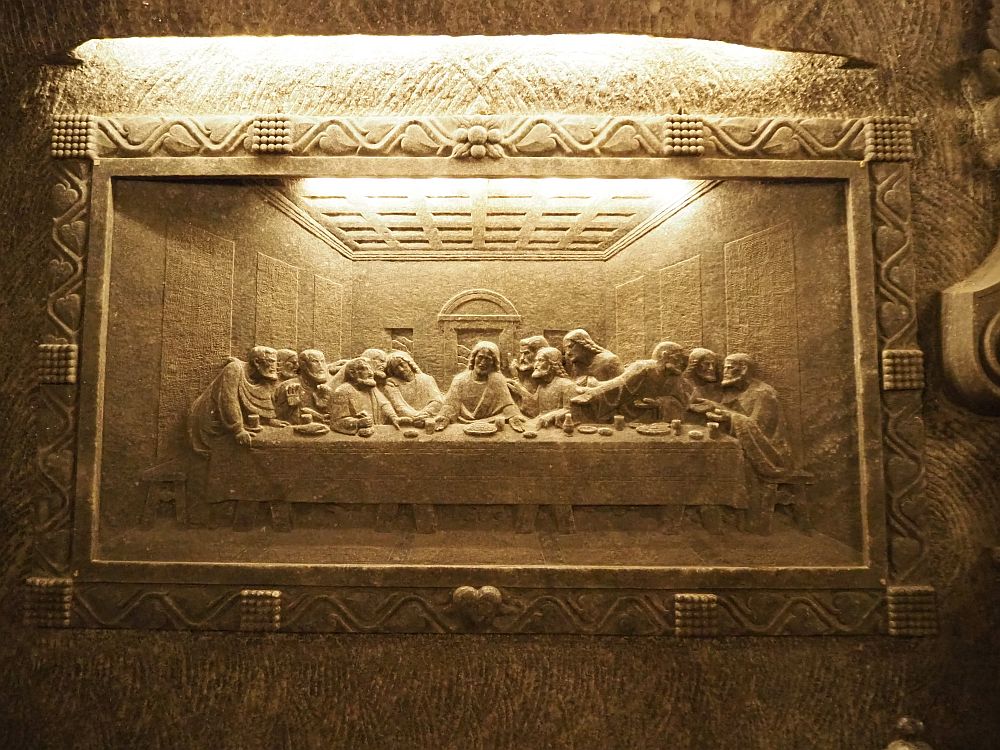 Da Vinci’s Last Supper as a bas-relief, carved into the rock salt wall of the St. Kinga Chapel in the Wieliczka Krakow salt mine.

The men (and horses) who worked in the mine, though, didn’t have easy lives. It was heavy and at times dangerous work. Men died in explosions. They worked incredibly hard in dank, dark conditions.

They were religious, and they prayed. So deep underground – the mine reaches 327 meters at its deepest and comprises 287 kilometers of passages – they couldn’t just pop up to the surface easily to go to church, so they began to carve figures, religious and otherwise, into the walls of the mine. They made themselves places to pray.

These carvings are what makes a visit to the mine so interesting. The images range from relatively simple, even primitive, to ornate masterpieces. Some are centuries old; some are modern. Many are religious: images of Jesus or various saints.

The most impressive part, though, is the underground Chapel of St. Kinga, essentially an entire cathedral carved out of the salt and adorned with carvings and statues. 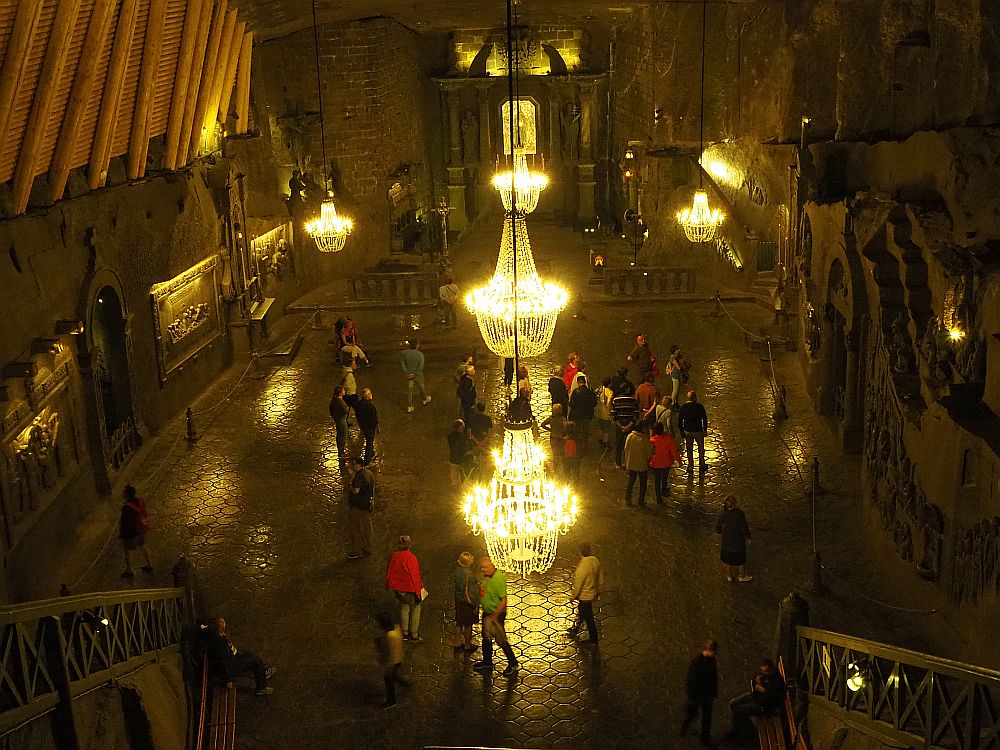 The Chapel of St. Kinga. Even the chandeliers are salt.

The detailed work even went so far as the floors, which are carved to look like ceramic tiles, and the chandeliers, made of pieces of salt that look just like crystals. It’s astonishing and, at times, magnificent. These anonymous men left a visual treasure underground.

Other articles about Krakow sights:

Wieliczka salt mine offers a number of different tours of various degrees of difficulty. I took the basic tour as a guest of the mines. While most of the people in our group walked down the initial 350 or so steps, I joined a few others who had mobility problems (I’ve been experiencing knee problems.) in the elevator. While I assume the elevator has been approved for use by the public, it looks and acts like a mine elevator: the doors were closed on us from outside, we were plunged into darkness and the cage we were standing in descended far too quickly for comfort, shaking violently the whole time. 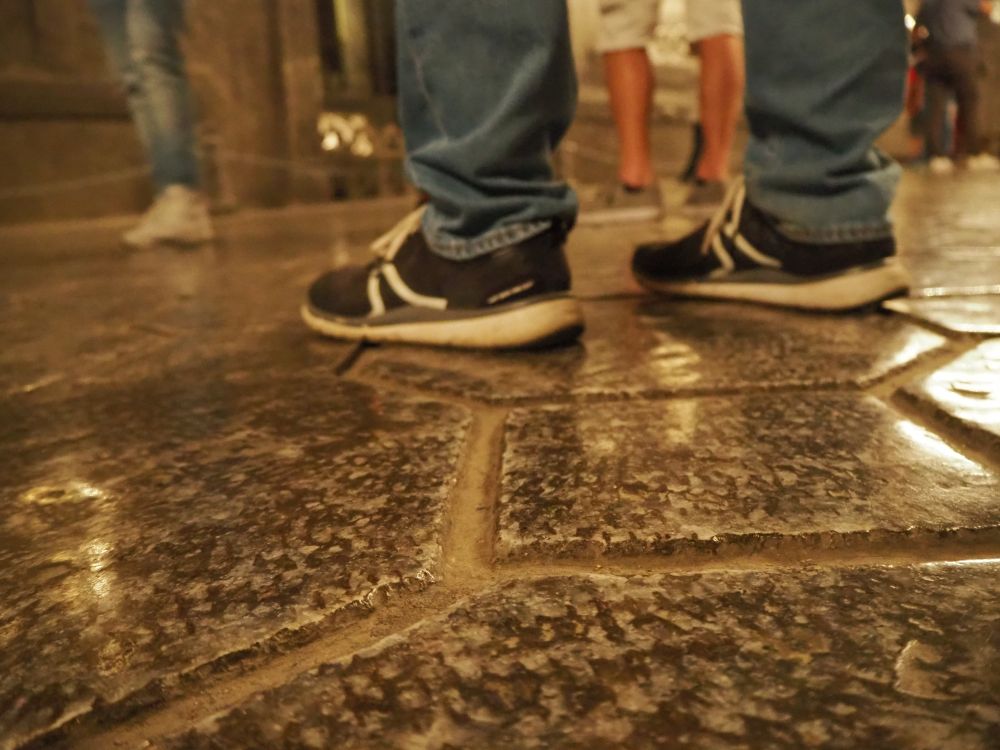 The floor of the Chapel of St. Kinga. (I have no idea who the legs belong to.)

The tour itself involves quite a bit of level walking, interspersed with further descents down several flights of stairs, none of them terribly long. In total, the tour covers almost three kilometers – only a very small percentage of the mine’s extent – and 800 steps, mostly down. Fortunately, the whole group could return to the surface by elevator.

Our guide recounted the history of the mine as well as the stories of the various images we passed. Along the way we passed several displays showing how the work was done, such as a pulley system used to lift blocks of salt. She seemed concerned to keep the group together and, when a group of us slowed down to take some pictures, she chased us along quite harshly. Given the mine’s 287 kilometers of tunnels, I suppose she must feel the pressure not to lose any tourists! 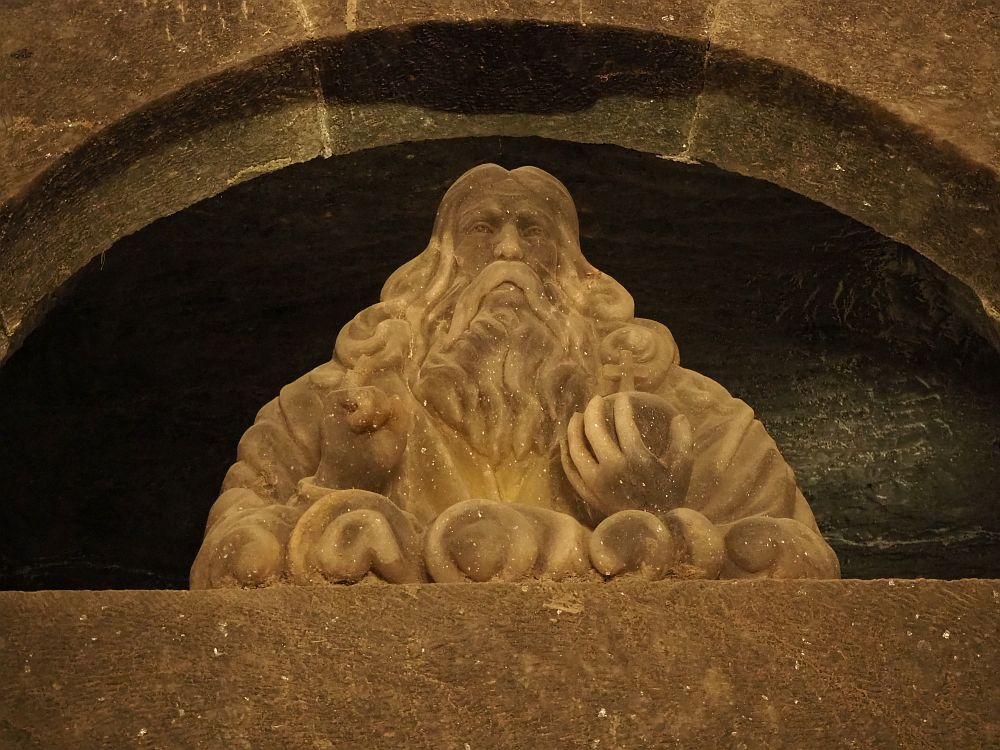 I’m not sure if this is also supposed to represent Casimir III or some saint, but I just liked the look of it. It was quite small and high up over a doorway.

The tour ended, not surprisingly, in a gift shop and café deep in the earth. There, you can buy various objects made of salt, such as tea lights, or concoctions of flavored salt.

Another mine nearby is also open for visitors: Bochnia Royal Salt Mines. Equally ancient, Bochnia combined with Wieliczka are a UNESCO World Heritage Site. This is based on the rock salt art as well as how they illustrate the development of salt mining from the Middle Ages to the 20th century, when both mines closed.

The Wieliczka salt mine is located about 10 km from central Krakow. You can either take bus 304 from Galeria Krakowska on u. Kurniki, or take a train from the airport or from Kraków Główny (the main railway station) to Wieliczka Rynek-Kopalnia.

Once you are there, several different tours of the mine are available:

Note: According to the mine’s website, “the most marvelous section” of the Tourist Route is accessible to people in standard size wheelchairs. Book in advance.

It’s chilly in the mine, even when it’s warm on the surface, so make sure to bring a jacket.

If you enjoyed this article or found it useful, please share it! The images below are formatted for Pinterest: 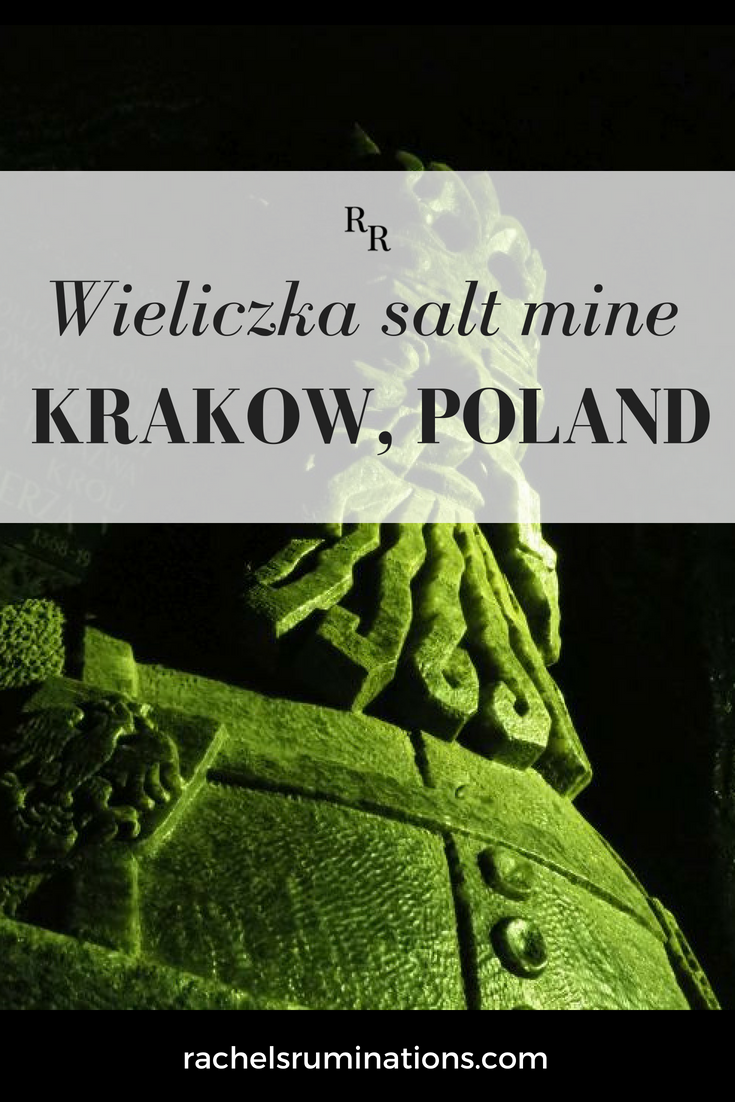 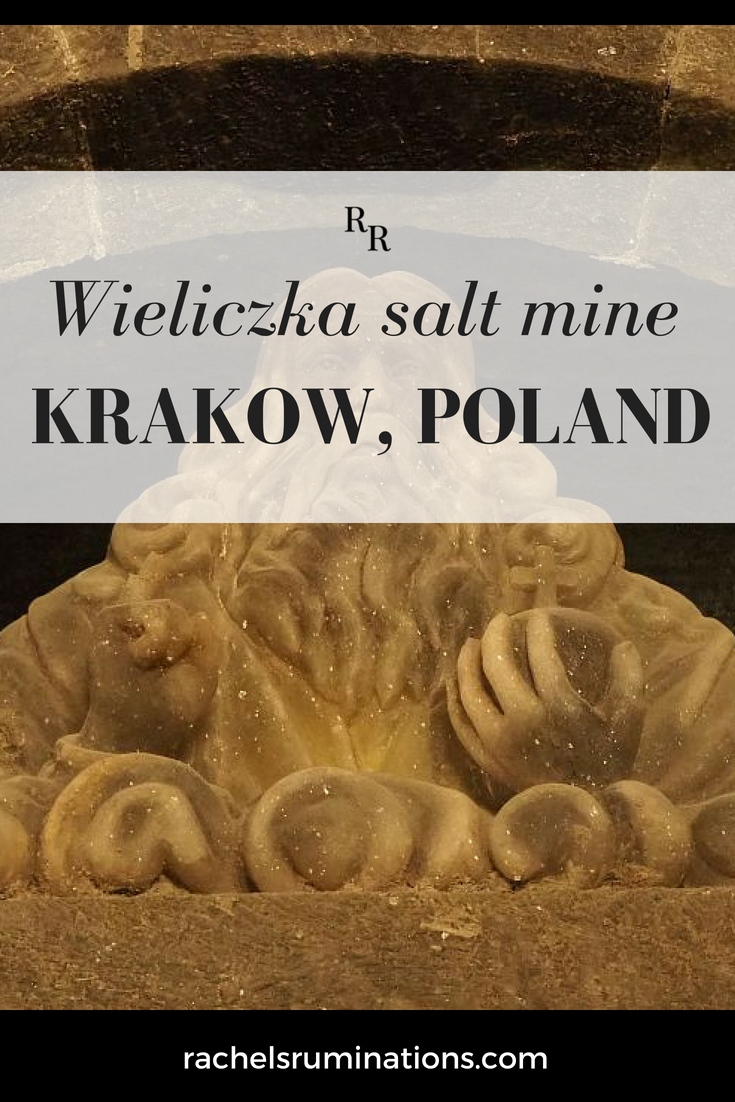 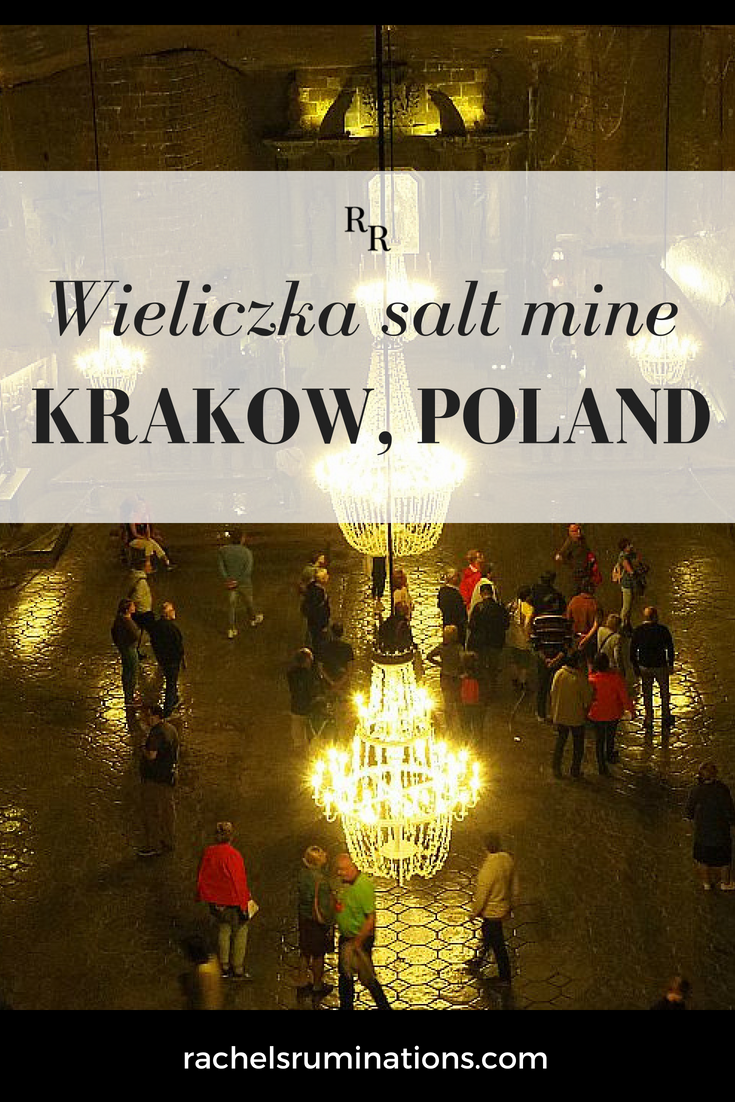