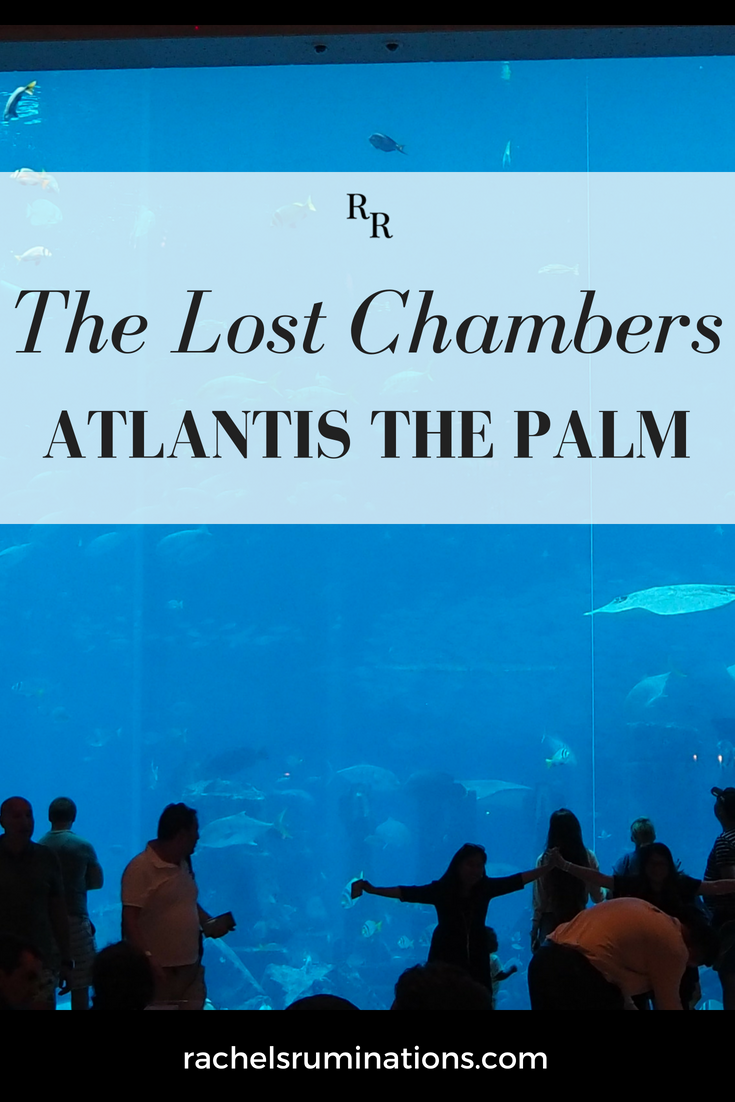 The Lost Chambers Aquarium at Dubai’s Atlantis the Palm Dubai hotel is not your run-of-the mill aquarium.

At any self-respecting large aquarium – think the Monterey Bay Aquarium or the Boston aquarium – you’d expect to see a range of species from all over the world.

The Lost Chambers has that. It isn’t a big aquarium, but some of the tanks are huge. It claims to house 65,000 creatures in a variety of habitats including a large “Ambassador Lagoon” with sharks, rays, and other large species; a jellyfish tank; some coral reef tanks; and a lobster tank, among others. It even has two white (albino) alligators.

(Note: This article contains affiliate links. If you click on one and make a purchase, I will get a small commission. It will not affect your price.)

You’d also expect to see an emphasis on education, with information delivered in the form of signs identifying each tank’s inhabitants and other exhibits teaching about issues like ecosystems, pollution, tidal life, etc.

The Lost Chambers has an educational component, with a tablet next to each tank where visitors can look up particular sea creatures. An app on a smartphone uses Bluetooth to sense where you are, and you can look up information or play games.

What’s different about this aquarium, though, is its theme. Keep in mind that the aquarium is in the Atlantis the Palm Dubai hotel. Its name, “The Lost Chambers,” is intended to evoke the Atlantis legend, of an island that sank into the sea.

When you think about it, is a sinking island a good image for a hotel that sits on an artificial island? #atlantisthepalm #atlantis #dubai @rachelruminates Click To Tweet

A visit to this Atlantis aquarium is clearly much more about atmosphere than education.

The largest tank, the “Ambassador Lagoon” (11 million liters), houses 250 species and, as at any aquarium, there’s a certain hypnotic effect to watching the rays, sharks and fish lazily circle through the blue water.

The tanks include, though, “ruins and artefacts from ancient Atlantis.” That’s a quote from the aquarium’s leaflet, but it doesn’t have the quotation marks in the leaflet. It’s presented as fact.

Anyway, what struck me most about this aquarium was not the fish tanks. It was the large hallways around and between tanks. They are decorated in a strange blending of ancient classical civilization accents with vaguely steampunk elements.

This "lost Atlantis" aquarium resembles bad old sci-fi films, Jules Verne’s 20,000 Leagues under the Sea, and new age mumbo-jumbo all rolled into one … with a bit of Star Trek thrown in. #atlantisthepalm #dubai #uae… Click To Tweet

One hall, the Seven Sage Chamber, has as its centerpiece a large something-or-other: a pod, maybe? A seat? I couldn’t tell what it represents. Round, more or less, it is a couple of meters across, metallic, but with seemingly organic curves. It doesn’t seem to serve any purpose. Above it, a chandelier of sorts emits a weak, yellow glow.

I looked it up later on the aquarium’s app where the Seven Sage Chamber is described this way:

In this room are the remains of an organic computer. The Sages came to this chamber to upload data from their exploration and research programmes. When the King needed to retrieve information a virtual screen would appear while the seven sages would sit around the room and give explanations of their work.

Well, that clears it up!

The app would be useful for looking up the marine animals on display; for each one you can find out its scientific name and a few interesting facts about it. There’s not much more than that, and the app doesn’t include all of the species the aquarium claims to contain, nor does it include information about habitats, ecosystems, or other more general topics. In any case, I find the dry combination of fantasy and fact, all presented as fact, disturbing somehow.

Another space, the “Knowledge Room,” sports a wall covered from floor to ceiling with blue oval-shaped glass balls. They blink slowly on and off, lighting only a few of the balls at any one time. Here is the app’s explanation:

In this chamber the Atlanteans would conduct their business affairs, depositing or withdrawing blue crystals which was standard Atlantean currency.

Given that each of these “crystals” is only a bit smaller than a soccer ball, they strike me as an awkward form of money. How big were the Atlanteans’ pockets?

In another open space, two niches, dramatically backlit, display what look like two old-fashioned scuba diving suits, or rather a steampunk version of them. Somehow they reminded me of the Creature from the Black Lagoon.

This room is called The Abyss, and, according to the informative app, the room was used by the Atlanteans for mining, looking for the crystal that was their main source of energy. They would wear the suits, the app explains, to descend down the mine shaft, an ornate structure in the center of the room, to search for treasure.

In another hall, the “Navigation Room,” the app even mentions a teleporter. Combine that with the crystals for energy (dilithium, perhaps?) and the Star Trek link is complete.

Throughout the aquarium, I came upon more such oddities, mostly in a metal that may have been bronze, though it was hard to tell in the dimness.

You can take a tour of the aquarium, including a visit behind the scenes to see how it operates. The aquarium’s publicity material says that on the “Fish Tales Tour” you’ll “learn about the myth and marine life of the ancient lost city of Atlantis.” Again that suspicious blending of fact and fiction.

Have you booked your stay in Dubai yet? I usually use booking.com.

The Lost Chambers of Atlantis Aquarium

I guess you can tell that I wasn’t wonderfully impressed, as far as aquariums go, though I enjoyed my short visit well enough. While I was distracted from the marine life on display by the bizarre décor, I seemed to be the only person there taking the time to look at any of it. Most of the other visitors were families with children, and they showed far more interest in the fish than anything else. If the designer’s intent was to create a new theme park with a new legend to go with it, I think he or she missed the mark a bit.

This Atlantis aquarium makes up part of a small mall attached to the Atlantis the Palm Dubai Hotel, a five-star confection at the outer end of Palm Island.

I tried the same trick I’ve used in other high-end hotel lobbies: I just walk in like I own the place. Generally no one challenges me – yes, I realize that it’s because I’m a white, middle-aged woman – and I get to wander around the public parts of the hotel, take the elevator up to see if there’s a view, or check out the pool. This time, it didn’t work: guards make sure that no one who doesn’t have a room key can venture any further into the hotel itself.

I would love to see the hotel’s undoubtedly opulent lobby. I’d love even more a peek into its fanciest room, the Royal Bridge Suite. Spanning the whole top of the hotel’s massive archway, the suite is 924 square meters and includes three en-suite bedrooms and a team of servants. It starts at over €10,000 per night (over $11,700). Two underwater suites looking out on the Ambassador Lagoon start at “only” €2800 per night (about $3300).

And if that appeals to you, here’s the link to book a room at the Atlantis the Palm Dubai. You’ll be happy to know that the price includes admission to the aquarium and the water park on the site, along with lots of other perks.

I did get to enjoy a ride in the Palm’s brand new monorail. When I visited in April 2018, the line had been completed and opened but several of the stations weren’t yet in use. Boarding outside the aquarium, I could see Aquaventure Water Park, the Atlantis The Palm Dubai Hotel, and a great view of the Dubai skyline from the driverless monorail train. It also gave me a quick glimpse down at some of the residential housing in The Palm along its Fronds – the name used for the streets within the man-made island complex.

The Lost Chambers also offers various special experiences, for an extra price, of course. I did not do any of these activities so I cannot vouch for their quality, and I don’t know if they’re worth their very high cost.

Next door to the aquarium is a water park called Aquaventures. I didn’t visit it, but I’m sure its water slides would be a hit with kids in the heat of Dubai. Stay away from the activities it offers that are not animal-friendly, like the dolphin shows or swimming with sharks. And be careful of sunburn!

Click here to buy a combined ticket for the Lost Chambers Aquarium + Aquaventures.

To get there, you can take a taxi or you can take the monorail. To get to the monorail, get off at the DAMAC Properties or Jumeirah Lakes Towers metro station (prices vary depending on where you are traveling from). Next, walk to the tram station and take the tram to the Palm Jumeirah stop. The price also depends on where you get on, and what sort of transportation card you have. Use the same card that you use for the metro.

At the Palm Jumeirah stop, you’ll have to follow the signs that will lead you up and across a large street on a bridge, then through a parking garage to the monorail station. Perhaps when the monorail station is complete the walk through the parking garage will be replaced by a dedicated walkway of some sort. This is the end of the monorail line, so board here and take it to the Atlantis station. 20AED one way (€4.60 or $5.50), 30AED (€7 or $8) round trip.

If you liked this article, please share it. The images below are perfect for pinning!