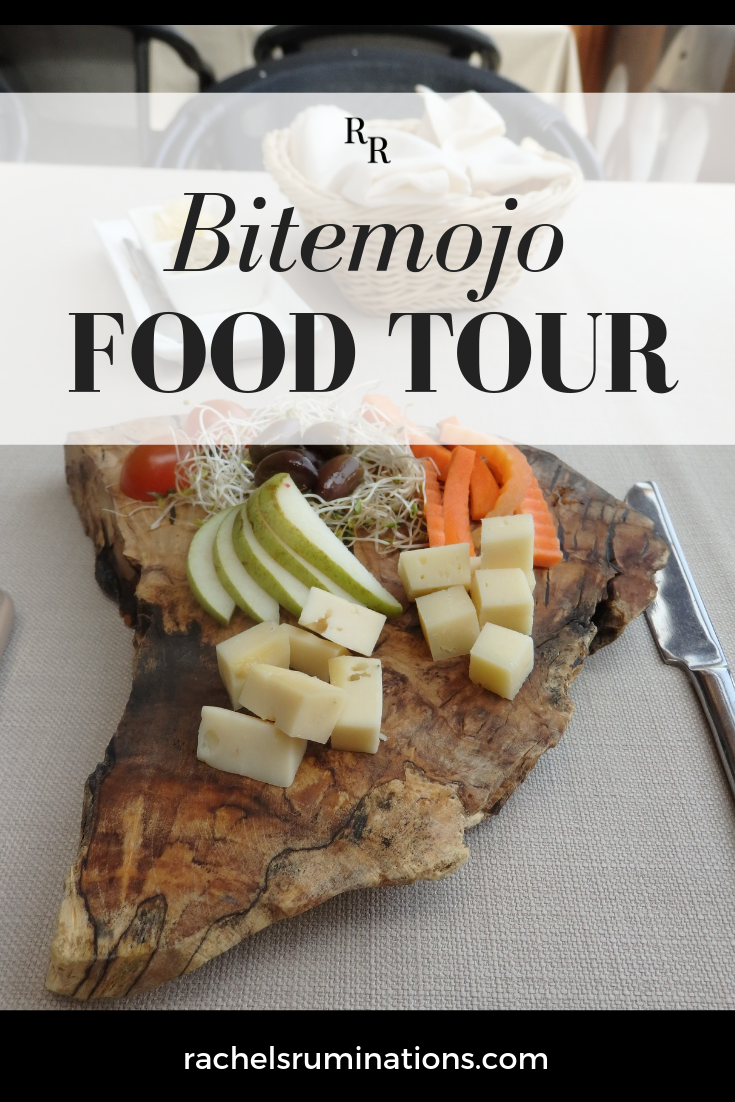 If you ever take a Bitemojo tour, make sure you start with an empty stomach, good walking shoes and plenty of time. You’ll need all three.

Disclosure: I took a Bitemojo tour in Jerusalem because I could do it for free as a participant in a TBEX conference for travel bloggers. It’s not something that would have even occurred to me otherwise. Nevertheless, I loved it, and happily did another one in Singapore after this one.

Bitemojo is an app that allows travelers to enjoy a food-oriented walking tour at their own pace. The tours are themed, so, for example, you could take a vegan food tour in South Tel Aviv or a “Night life and alcohol” tour in the Florentin section of the same city.

Once you have paid – the currently available tours in Berlin, Jerusalem and Tel Aviv range from €18 to €30 – you get access to the tour on your phone.

You wend your way along a route with the help of a map in the app, stopping four to six times for “bites.” Take my word for it, these are not just bites! Sometimes chic food, sometimes more street than chic, sometimes involving drink … you certainly will be full by the end of the tour!

While the emphasis is on the “bites,” the tour points out “hidden gems” as well, which means additional information about the points of interest that you pass on the way. Walking through unfamiliar, untouristed neighborhoods, I enjoyed the history and factoids the app provided. If I have any criticism of the Bitemojo tour I took, it would be that it should include more of these, or perhaps they could add an option to link to more information.

I was happy to take the Between East and West Jerusalem tour because I’ve never explored East Jerusalem on my previous visits to Israel. According to the app, this tour is 2.9 kilometers long and takes about three hours.

I made my first mistake at the very first stop, just outside the Jerusalem Old City walls, near the Damascus Gate in East Jerusalem. It was a small hole-in-the-wall restaurant, with a few tables outside. My mistake? I ate almost all of my “bite”! I was served a plate of hummus, three pita breads, three balls of falafel, and an assortment of pickles.

I had waited till early afternoon to start the tour, so I was ready for lunch, and I knew there would be more food later. But this hummus was so good! And the falafel too: not at all greasy, and very flavorful.

At each stop for a bite, the app offers three pieces of text. The first is about the food itself: what it contains, its history, and whatever else is special about its preparation or the ingredients this particular restaurant uses. For example, the owner of this hummus place gets his olive oil from a family business. The second text tells about the place: the building or the neighborhood and its history. The third tells about the person who owns the place and/or cooks the food: his biography and how he got into this business.

If you’re lucky, the person featured in the app will have time to chat with you and answer questions. That’s what happened at this first stop. The owner, named Muhammed, sat down and told me about his life while I ate.

Almost completely full, I moved on to the next stop, a bakery. It’s clearly a local institution, and I ended up waiting quite a while as a procession of women in abayas and headscarves completely ignored my presence and demanded the counterman’s attention, often shouting out their orders before the poor man had managed to serve the one before them.

Standing there, admiring the neat piles of breads, cookies and pastries, I eventually realized I’d have to be similarly assertive if I was ever to get served. Stepping up to the counter, I waved my smartphone in the man’s direction, eventually getting his attention and letting him know I was there on a bitemojo tour.

The app allows you to confirm when you receive a bite, so that the vendor gets a message immediately. It’s very simple to use. In this bakery, the man glanced at my phone, said “Choose one thing,” and turned back to the group of impatient women.

Looking around at all those appetizing baked goods, I decided to choose by size, finally settling on a single small chocolate ball. I have no idea what it was exactly, but it was chocolatey, gooey, and I think it contained some coconut as well.

The man bagged it and I turned to go, but the man called to me to stop. There was more: I was also due a cup of hot mint tea.

This was something I’d had before, and I love it: black tea, but with a few fresh mint leaves added. The combination is a favorite of mine, and it went well with the chocolate ball too.

Fortunately I could work off a little of what I’d eaten on the walk to the next bite, at the Monastery of Notre Dame, now a hotel catering to Christian pilgrims. On the top floor is a cheese and wine bar.

Again, my “bite” was more than a bite. I received a cheese board – several pieces of cheese, several slices of fruit, and a bread basket filled with delicious bread – and a glass of wine. I admit that I drank most of the wine but ate very little of the food.

While the cheese and wine were both tasty, I would have preferred to try some local cheese and wine. What made this bite special was the view, which was magnificent.

The tour next took me into the Old City through the New Gate, passing through the Armenian quarter. I took my time, partly to digest, partly to read the tidbits of information on the app, and partly to take lots of pictures.

The Armenian quarter is the smallest quarter, and the route passed through just a small corner of the Old City, a section with none of the famous sights. The only other people I saw were locals.

Passing out of the Old City through the Jaffa Gate into West Jerusalem, my next stop was in the chic new shopping street called Memilla. I realized as I entered the app’s restaurant that I had been here before. It was an Italian place called Luciana, where I had eaten with family on an earlier visit to Israel.

At that time, in the summer of 2014, the Gaza War was going on, and as I visited my family in Jerusalem, I ruminated on how Israelis just carried on philosophically with their everyday activities, including going out to dinner with visiting family from the Netherlands.

So now I was back and, given a choice between two starters from the menu – polenta with mushrooms and cheese, or beet tortellini – I chose the polenta. It was good, but again, I didn’t eat much.

Somehow I managed to find room for this one: half a Belgian waffle with my choice of topping. Much less chic, this waffle place was a brightly-painted storefront with a few tables outside. But the waffle was fresh and delicious.

Bitemojo is only available in three cities right now: Jerusalem, Tel Aviv and Berlin. However, the company has big plans to expand to cities around the world. I wish I’d known about it when I was in Berlin last fall.

Are you a foodie? Is this something you would try? Add a comment below!