When my new friend and fellow blogger, Betsy Wuebker, posted about her visit to Pulau Ubin, near Singapore, it couldn’t have come at a better moment.

I was on my way to Hong Kong but had just heard from my foster daughter, Krislyn, who lives in Singapore now. It turned out she couldn’t come visit me in Hong Kong while I was there, and could I go to Singapore to see her instead?

I very much wanted to see her, of course, but didn’t particularly want to be in Singapore. It’s too urban and new for my likings. Hong Kong has a grittiness I find more interesting.

So when I read Betsy’s article, I knew what I wanted to do with my one full day in Singapore: go visit Pulau Ubin. 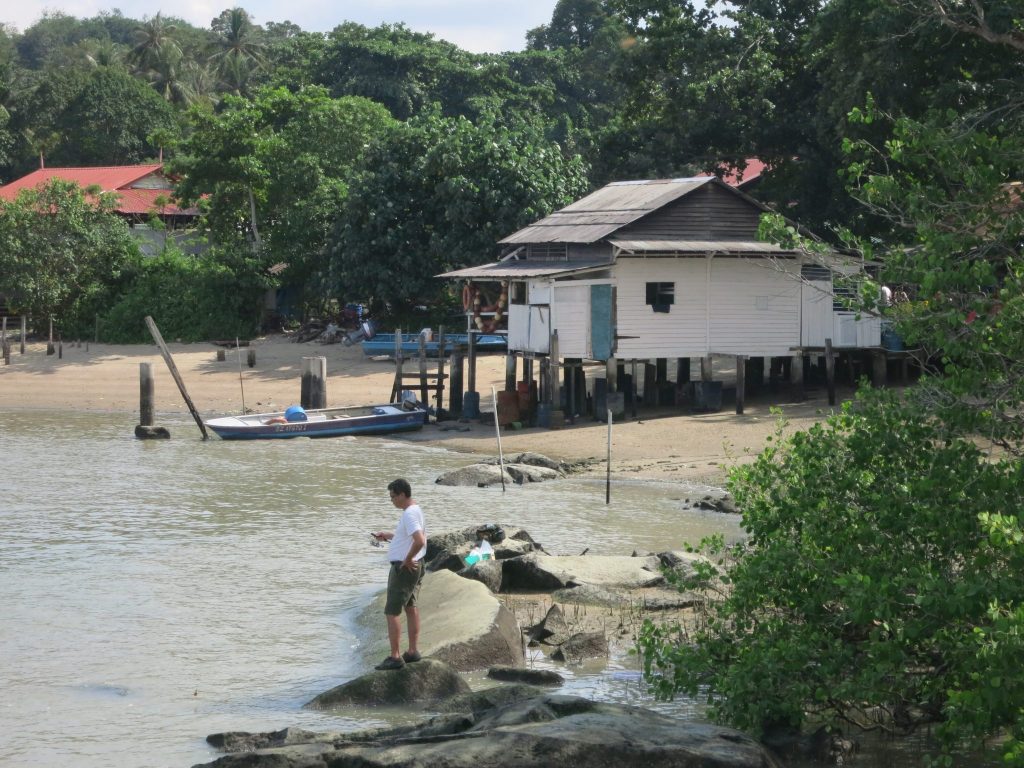 the beach on Pulau Ubin next to the ferry (“bumboat”) landing

Krislyn, the quintessential city girl, was horrified. Too rural, too many mosquitoes. So, instead, I went with her aunt, Billie, and Billie’s son, and agreed to meet Krislyn in the afternoon when we were back. Since Betsy did such a good job describing Pulau Ubin, I’ll just add some comments to what she wrote rather than repeating it. Please go ahead and read her post; I’ll wait!

Billie told me that when she was a kid she used to go to Pulau Ubin often with her friend whose grandmother lived there. She hadn’t been there in many years, and commented as we explored the island on all the things that had changed.

The roads are much better; they weren’t paved when she was little.

Many of the houses she remembers are gone, and she commented more than once on the bad condition of some of the remaining ones. The traditional, original houses are all made of wood.

At one point, as we were bicycling down the road, she pointed out a house that was barely visible in the dense undergrowth on one side, up a hill. “That was my friend’s grandmother’s house!”

I had noticed a path just before that and wondered, in passing, where it led. Now I knew. We got off our bikes—no need to lock them on an island where anyone stealing one would have to take it away on a bumboat—and picked our way up the path. Very overgrown, it was hard to navigate, involving scrambling over some trees that had come down across it.

The house, Billie guessed, hadn’t been lived in for 20 years or so, and it looked it. Boarded up, overgrown, crumbling. We could only see inside through a crack, and it looked like it had been left in a hurry, judging by peering through that crack and seeing what looked like laundry hung up to dry. Billie told me the woman hadn’t been able to take care of herself and had been moved to a nursing home in Singapore city. 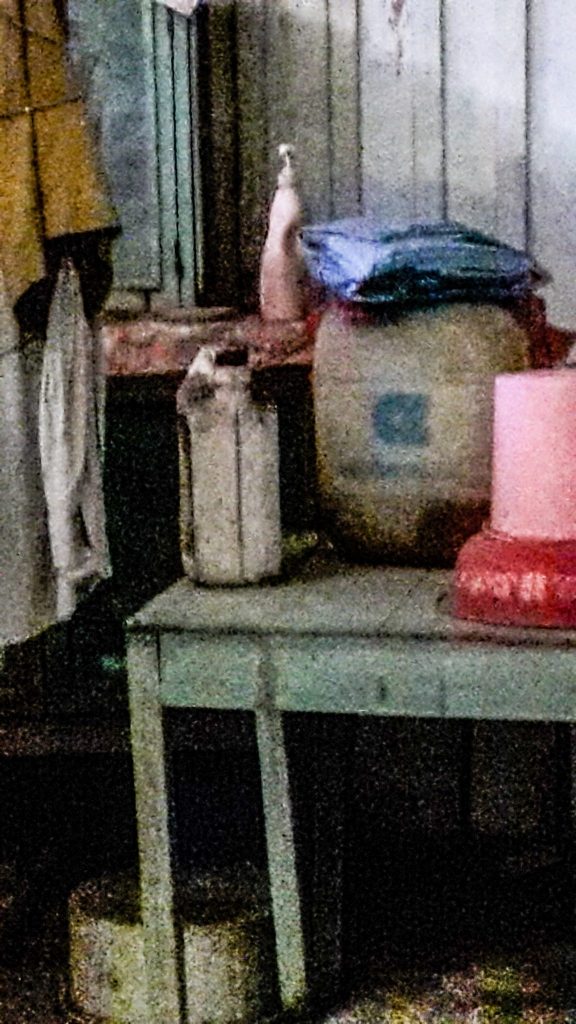 Sorry about the graininess of the photo: I took it with my mobile phone pressed up to a crack in the wall.

Crashing about in the undergrowth, Billie’s reminiscences continued. “That was where the pit toilet was.” And a shed. Across the road, there used to be a public bath they used. She told me about some of the foods they used to eat when they visited too.

I asked her about the planned development Betsy mentioned in her post. She didn’t seem very concerned about it. Her guess was that it didn’t mean anything more than making it easier for locals from Singapore to visit. The paved roads, for example, and perhaps new public toilets and other facilities for day trippers. She didn’t think it would go much beyond that, with big hotels or other big projects that would change things too much. 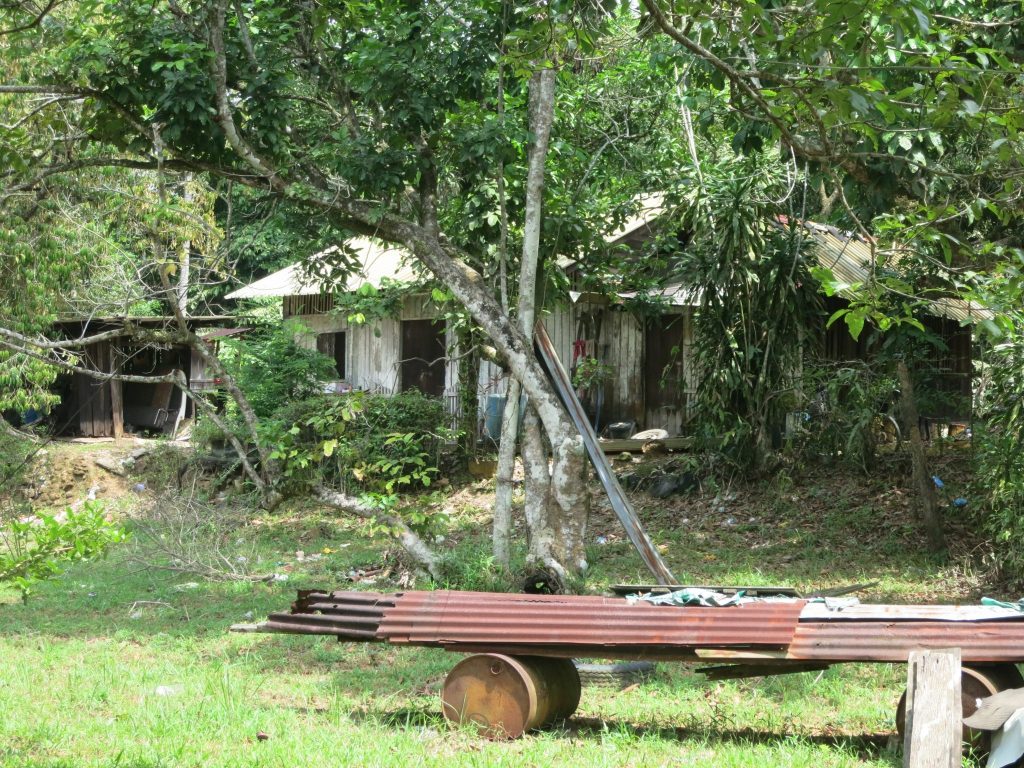 a house on Pulau Ubin: not in great condition

Billie’s theory about the rather rundown condition of the remaining buildings was that the owners might be waiting to see what the government was planning. Maybe the government would pay for the renovation or restoration of their houses, in order to preserve Pulau Ubin’s history. Alternatively, they might want to take them over and restore them for their own purposes. In Singapore, she said, if the government wants your building or land they have to pay market price. So, she guessed, the owners are waiting to see what happens. 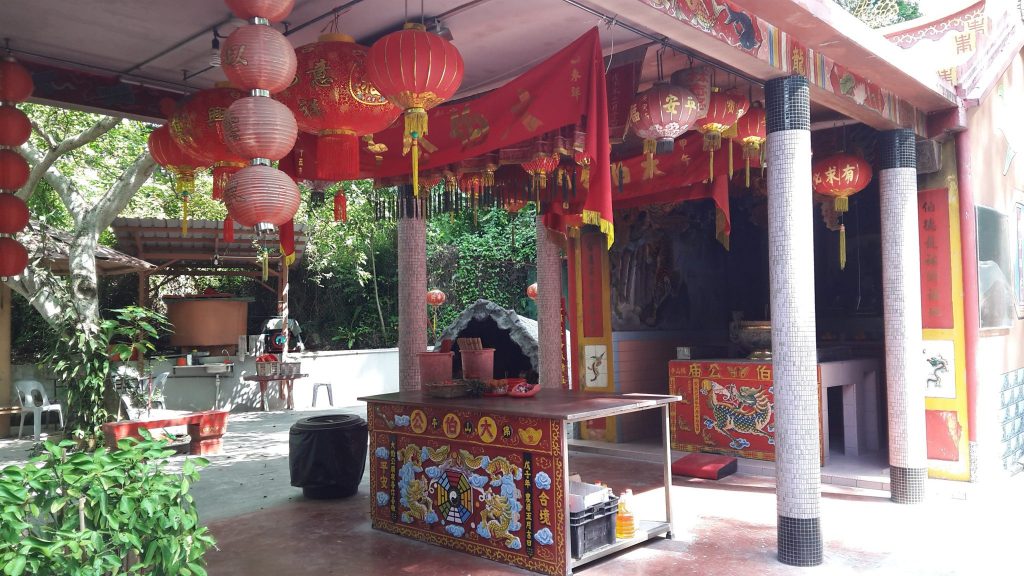 We didn’t go to the German Girl’s shrine, though we briefly spoke to a pair of Latvians who hadn’t been able to find it despite their best efforts. We did, however, visit a couple of other shrines, one of which was particularly attractive (Billie was just pleased that they had clean toilets.). It was a Thai Buddhist shrine, according to Billie, but the banners are something I associate with Nepal. In any case, there was something magical about standing under all those colorful banners as they fluttered in the cooling breeze while a group of monks chanted in a low monotone nearby. 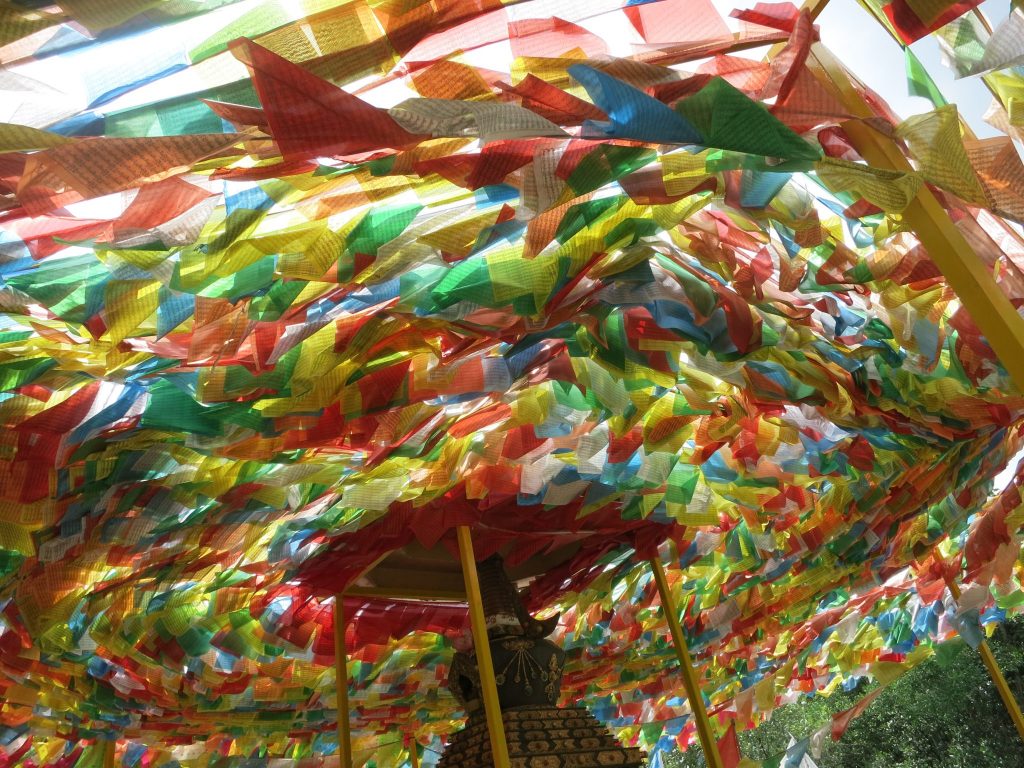 Flags in the breeze at a shrine 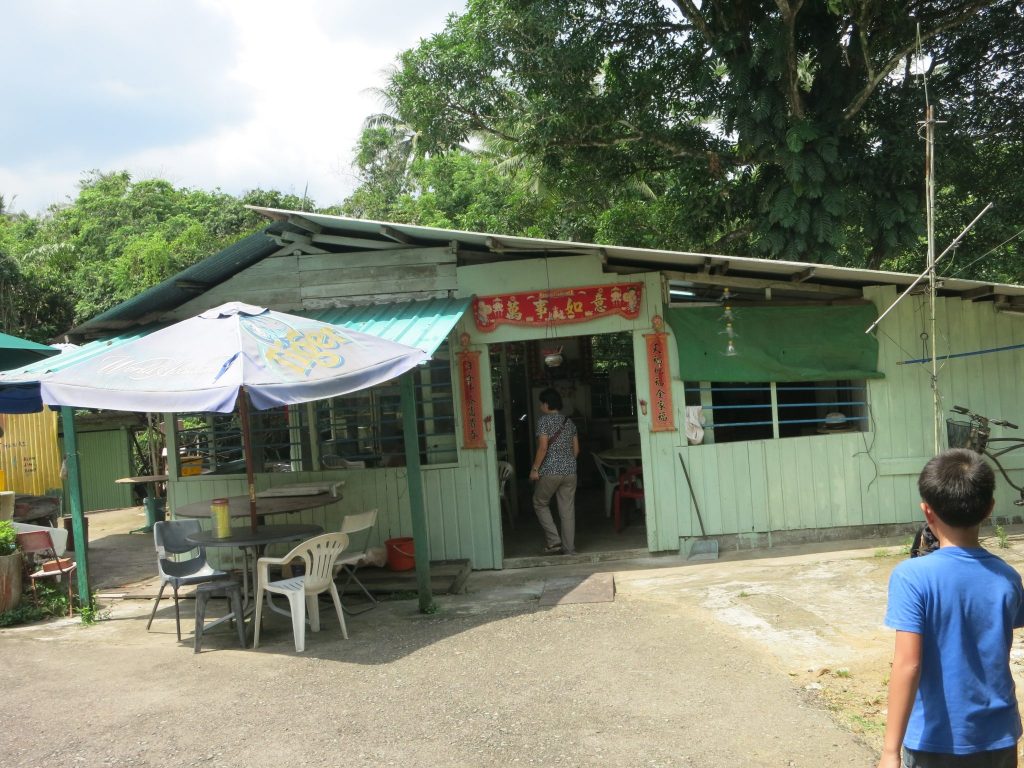 a drink stand on Pulau Ubin

Here and there along the roads, locals have set up stands to sell drinks to passersby. We stopped at two of them, and I learned that these stands are also often their homes. In one, it seemed that we were stepping into their living room. I could see a room to the side with the door ajar where a bed was visible. An elderly man sat at a table, using shears to clip some herb or other that he had picked. He told us that villagers grow various herbs to sell in Singapore. 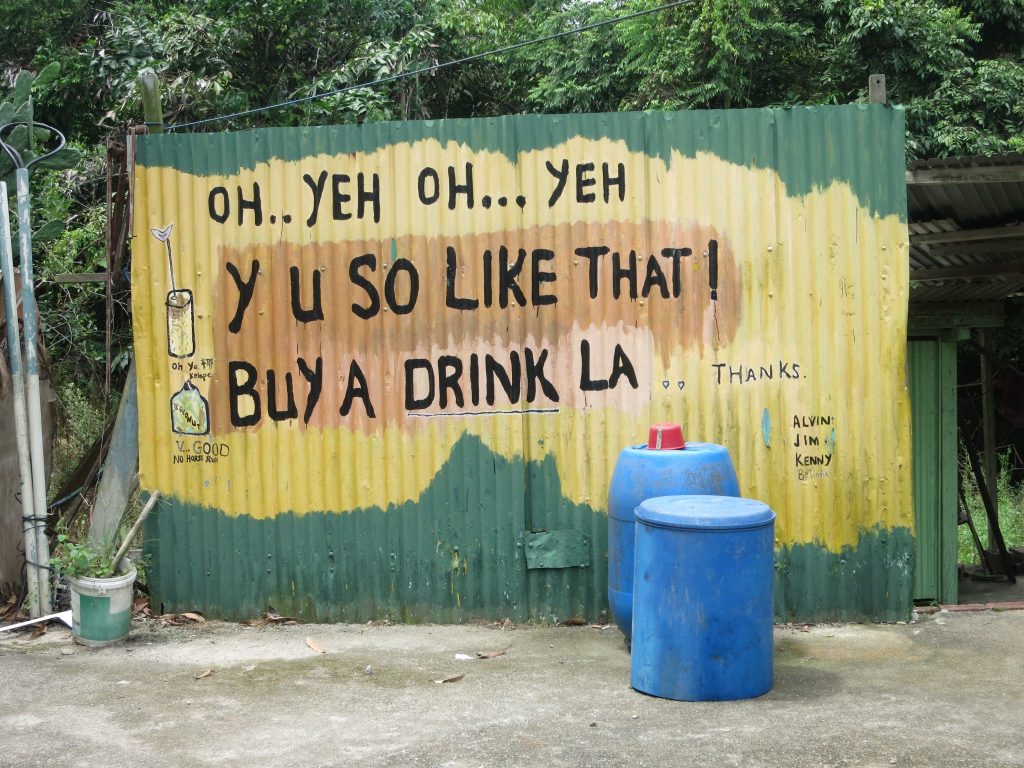 a hand-painted sign outside a drink stand on Pulau Ubin

At one stand we could buy a fresh coconut, which the vendor hacked open, inserting a straw to drink out the milk. I’m not a fan of coconut milk, but Billie and her son enjoyed drinking it and then using a spoon to scrape the coconut meat off the sides. 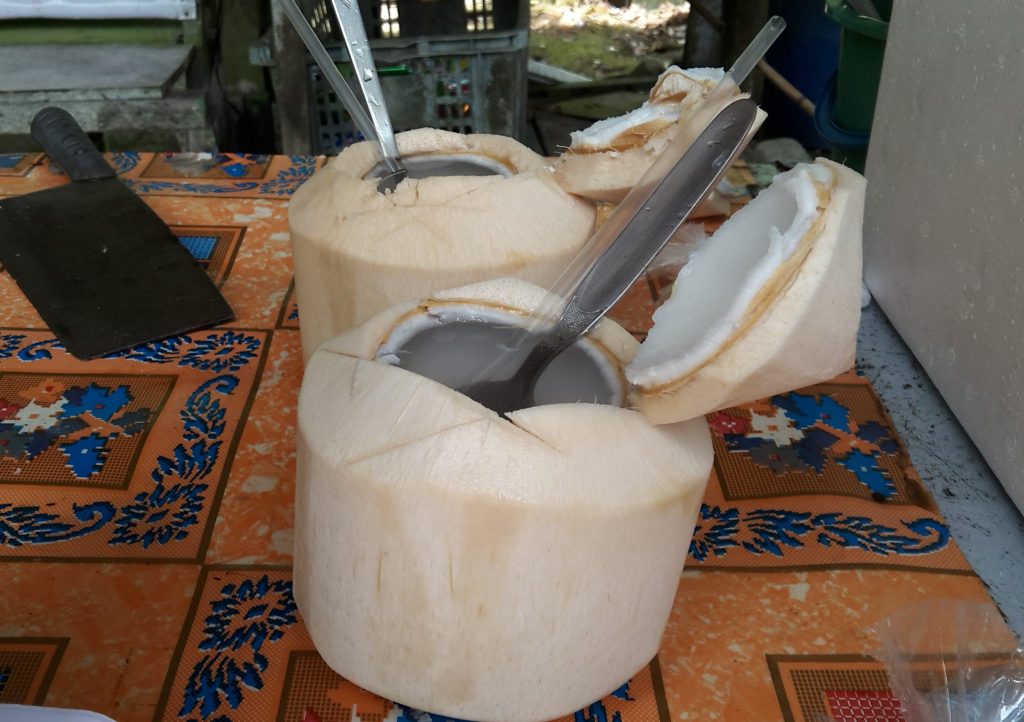 Coconuts ready to drink and eat

What to bring to Pulau Ubin

Despite Krislyn’s worry about mosquitoes, I didn’t have a problem with them. Nevertheless, it would be a good idea to apply some bug repellent. You should also put on sun lotion beforehand. Be prepared for some serious heat and humidity though, by carrying plenty of water or stopping at all the drink stands.

I loved this merry statue at one of the shrines on Pulau Ubin.

If you rent bikes, check that the brakes work and that the height of the seat works for you. If you’re tall, that might be a problem: even on its highest setting my bike seat was too low and too close to the handlebars.

According to Betsy, Pulau Ubin is a taste of what Singapore once might have been like. Billie’s reminiscences seemed to confirm her assessment. It will undoubtedly change in the next few years, but, hopefully, that won’t destroy the atmosphere, just make it more accessible. And it certainly makes a pleasant day’s escape from the big modern city of Singapore.

Have you been to Singapore? What were your impressions?

This post is part of the Travel Photo Thursday Linkup. Add a link to your post using the button below and check out some of the others!