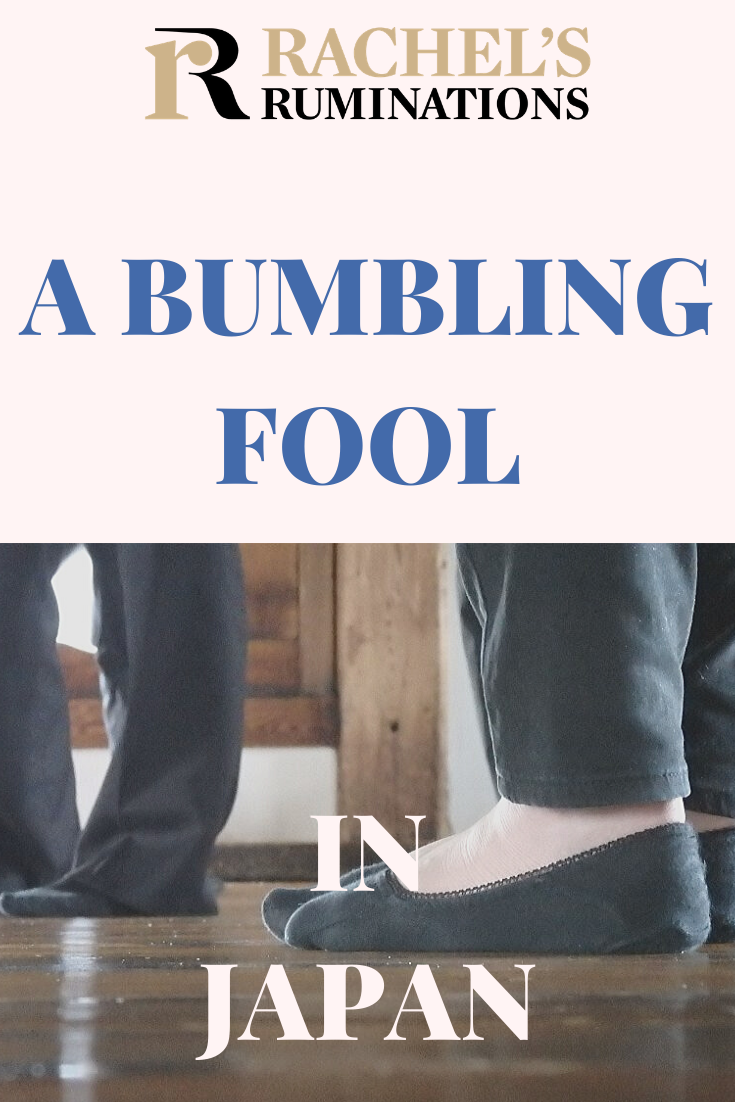 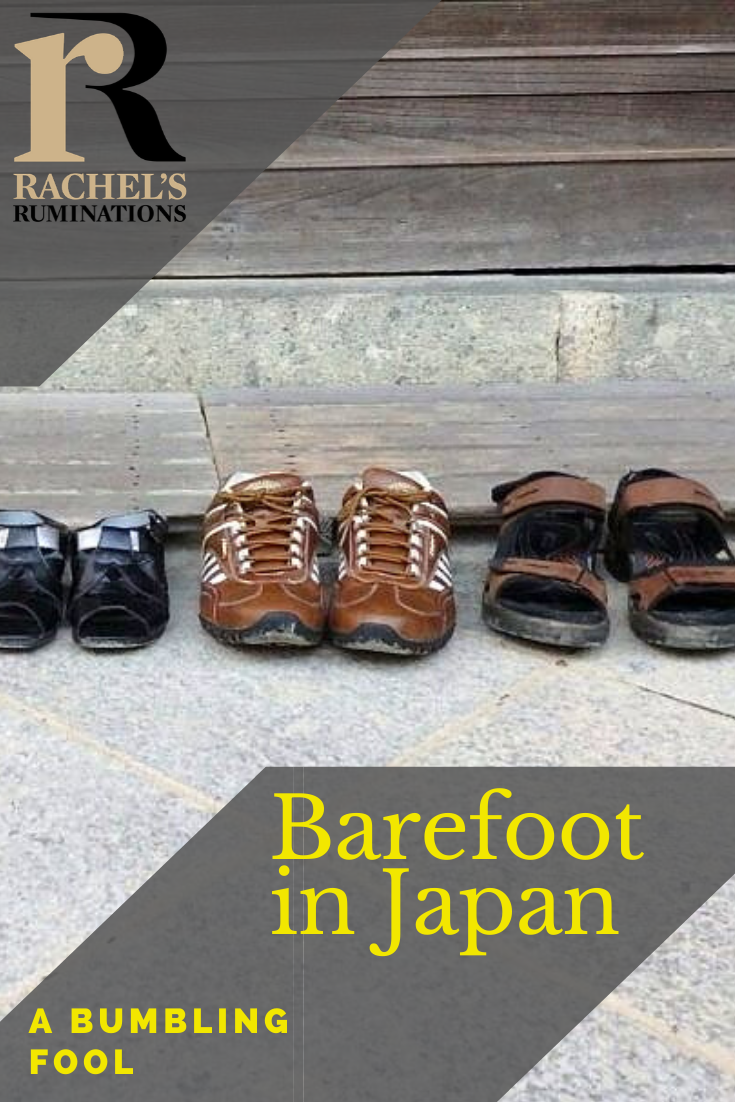 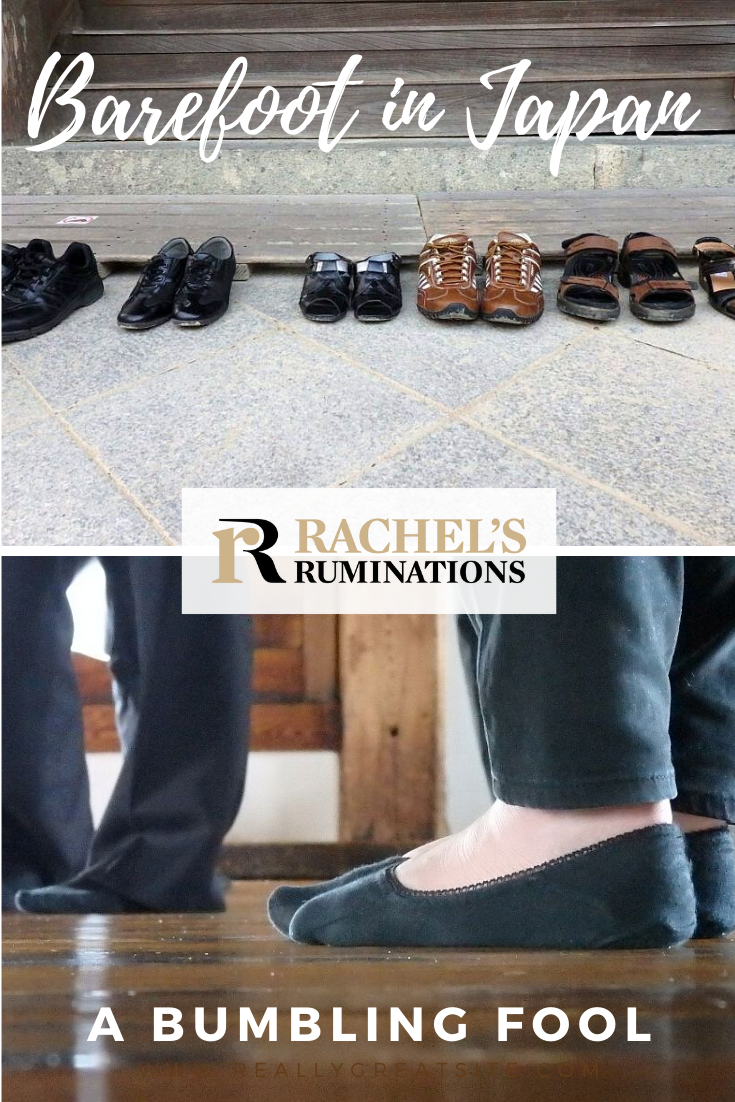 Much of the time that I was in Japan I felt like a bumbling fool, and shoes were a big part of it. The Japanese have a lot of rules regarding footwear. Basically, you are expected to go barefoot in Japan pretty much anywhere inside. That was more difficult for me than you’d think.

Disclosure: This article contains affiliate links. If you click on an affiliate link and make a purchase, I will receive a small commission. This will not affect your price.

Most houses, and many other buildings like museums and some businesses, have a step up just inside the door. I can step up, of course; that’s no problem. Except one night when I entered a rather poorly-lit restaurant and didn’t see the step up just inside the door. Thump with my toe (ouch!), loud bang, and everyone in the restaurant turns to look at me. How to make an entrance!

What you are supposed to do as you enter the house is take off your shoes before stepping up. We do that at home as well, to avoid tracking in dirt, so that shouldn’t be a problem, right?

After taking your shoes off in Japanese houses, you put them on a shelf next to the door. Then you put on slippers, which in homes and some museums are provided for you.

This is where I had a problem. Actually, two problems:

2. After removing your shoes: in the house

So you’ve successfully taken off your shoes and changed into slippers to walk into the house. But wait! If this is a traditional Japanese hotel, called a ryokan, or if it’s a private home, it’s not as simple as that. Any rooms with tatami mats on the floor are off limits to slippers. You have to take off the slippers outside the door and go barefoot or in your socks.

I had trouble here too: I simply forgot. If I was wearing slippers, I just couldn’t seem to remember to take them off. I would step inside, onto the tatami mats. At some point I would realize what I’d done and scurry back to the sliding door to place the slippers outside.

Then, leaving the room to go to the toilet, for example, I would forget about the slippers and walk right by them, barefoot down the hall.

Even if you do remember to put the slippers back on, things get more complicated in the bathroom. Opening the door, you’ll see a different pair of slippers, usually plastic, inside on the floor. There’s only one pair this time, since only one person uses the toilet at a time. (In some public restrooms in museums, you’ll see a row of slippers here too, just like at the front door.) The deal here is that you’re supposed to take off your house slippers, leaving them in the hallway, and step into the toilet slippers.

Once you’ve done your business (which might take a while given all of the toilet options you have, but I’ll save that for another post), you are supposed to step out of the toilet slippers to leave them there for the next person, and then step into your own again.

I didn’t even once remember to do that on first stepping out of the toilet. Without fail, I would be halfway down the hall before I remembered that I was supposed to leave the toilet slippers in the bathroom. I would hurry back, hoping no one saw me, and quickly trade slippers.

4. In public places: taking shoes off in Japan

These customs aren’t just for at home. I visited quite a few historic buildings while I was in Japan, and usually I had to do the same thing there. Some supplied slippers, some didn’t—which I preferred because then I could acceptably go barefoot. In some, I was handed a plastic bag and expected to place my shoes in the bag and carry them along with me. This was necessary because the entrance and exit were in different places.

So far, I’ve only talked about going barefoot in Japan. There were plenty more things that kept me bumbling:

So you can see why I felt like a bumbling fool most of the time. I never seemed to do anything right, or at least I felt that way.

At this link, Japan-Guide.com, you can read all about the rules of Japanese etiquette.

You can book your hotels through this booking.com link.

Have you had similar experiences on your travels? How did you deal with going barefoot in Japan and the unfamiliar shoe etiquette in Japanese homes and hotels? I’d love to hear about it! Leave a comment below.