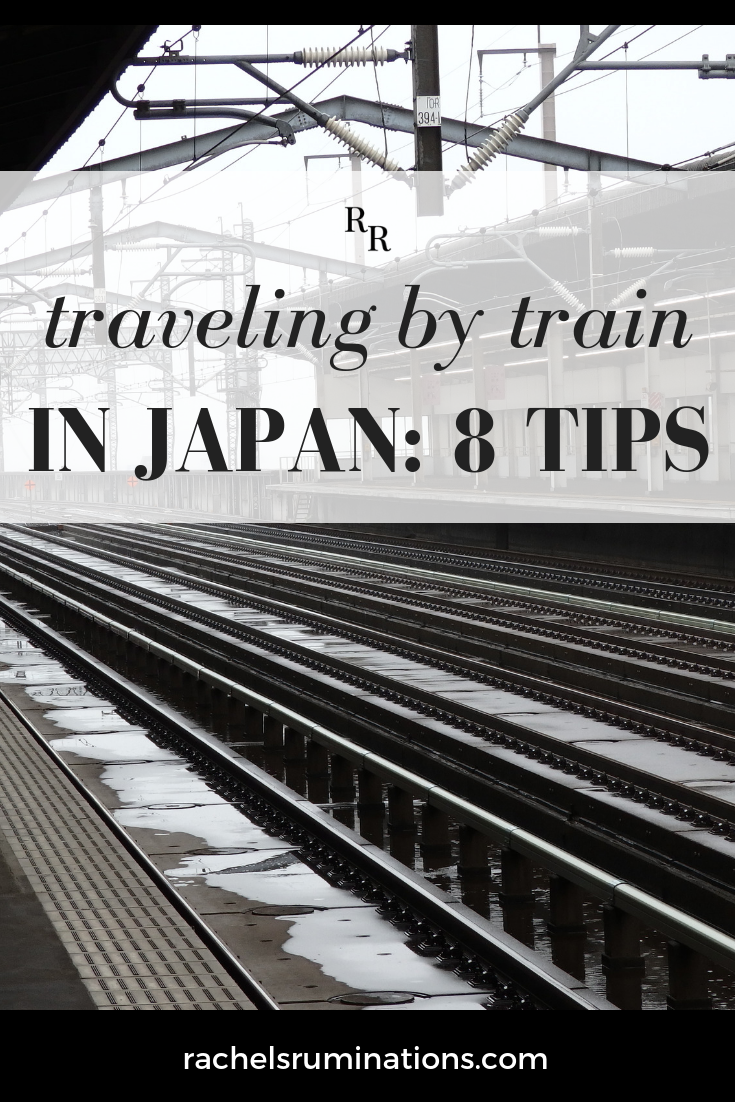 For those of us who do not know Japanese, traveling by train in Japan can be a bit daunting, to say the least. Here are some tips for Japan travel that will allow you to negotiate the Japanese rail system, including reading signs, without knowing any Japanese at all.

Japan has several different rail companies. The biggest is Japan Rail, but there are other, private companies as well. You’ve probably already heard the recommendation to get a Japan Rail Pass. This pass, available for up to three weeks’ worth of travel on Japan Rail, is only available from outside the country and can only be used on Japan Rail trains.

However, if you are already in Japan and can wait a few days, you can order the pass delivered even in Japan. Use this link to order a 7, 14 or 21-day JR Rail Pass.

My suggestion: plan your trip first and do the arithmetic to see how much the individual tickets will cost. The website Hyperdia is really good for this. If you’ve already decided to travel on a Japan Rail Pass, make sure, when you type in the search information in Hyperdia, that you click on “more options” and then remove the checkmark next to “private railway.” However, unless you’re going to up stakes and move pretty much every day, it may not be worth your while to get the pass.

Whether you have a Japan Rail Pass or not, it’s a good idea to reserve seats if they’re available. To do that, go to the Japan Rail office in the train station. If it’s a busy time (weekends, holidays), try to go the day before or earlier. Otherwise the same day should be fine.

I found that some of the ticket agents spoke some English, but many didn’t. Explaining what I wanted could be difficult. Instead, I came prepared. I searched the route I wanted to take on Hyperdia. I wrote it down on a piece of paper like this:

Besides the departure and arrival times, notice that I’ve also written the name of each train: Shinano 6 and Hida 11 in this case. “Shinkansen” is a bullet train, but the Limited Express trains are also pretty fast. Each train has a name and a number. I’ve written it all out clearly; I got the impression that some of the ticket agents weren’t comfortable reading Roman lettering. And, if the information was available on Hyperdia, I wrote down the track numbers for my own reference.

Arriving at the ticket office, I would hand the agent this piece of paper and say something like “I’d like to go here today.” This information saved them from struggling to explain to me what train to take and where to change trains and so on. They would study the paper for a few moments, generally looking relieved that they wouldn’t have to struggle to speak English. They’d just print out the ticket and hand it to me. I would then ask “What track?” and that would be enough to be on my way.

If you are able to reserve a seat, the agent will hand you a ticket for each reserved leg of the trip. The ticket may be in English or the agent may forget to do that and print it in Japanese. That’s okay; all you need are the numbers on the ticket.

4. Read the Numbers on your Ticket

So the ticket above is not hard to read. You know the train name and number, which train car you need, and your seat number.

Now look at this double ticket, printed in Japanese.

I can’t read the name of the first train, but the number is 505. I can’t read the place names either, but presumably I know where I bought the ticket for and where I intended to go! (Besides, I was the one who gave the ticket agent the list of what trains I want to take, and I still have that.) It’s July 10. The first train leaves at 11:13 and arrives at 11:26. My reservation is for car 7, seat 7A.

In most stations I passed through, the electronic signs announcing the trains appeared in both Japanese and English, so just wait a while and it will switch. However, even just using the numbers you can see among the Japanese lettering, you can figure out where you need to be.

The time: Japanese trains are amazingly punctual. Not sure which platform to go to? Just check what time your train is meant to leave. Look for that time on the signs marking each track. So if your train is scheduled for 12:48, find that time on one of the signs. That’s your track. And, believe me, it will definitely leave at 12:48!

The train name: Each train name includes a number. Look for that number on your ticket to confirm you’re in the right place. If your ticket says your train is the Hida 11, look for the number 11 on the sign.

And in any case, usually the signs translate into English from time to time.

6. Stand at the right part of the track

Which train car? Since you have a reserved seat, you need to be at a particular car of the train. This is where it gets a bit complicated. There are trains of different lengths, but each train is always the same length. Make sense? What I mean is that if the Hida 11 is an 8-car train, it’ll always be an 8-car train.

Look for the train car numbers. They’re often on the floor along the track, but sometimes they’re on signs hanging above the track, as in the photo above, where the Hida 11 car number 1 stops.

Now look at the electronic sign announcing your train. It will have a symbol next to it: a triangle, a circle or an arrow. If it’s a triangle, look for the signs along the track with a triangle. If you have a reservation in car 5, then you want to stand where the sign has a triangle and a 5. In the picture above, the second car of an arrow train and a triangle train stop at very nearly the same spot.

Looking at the sign above, if you’re catching the 20:16 train, wait on the side of the platform to your right, track 2 toward Otsu. Look for the signs with triangles to figure out where your car will stop.

If your train is scheduled for 20:25, it will be on the left side of the platform. Look for the signs with an arrow to find where your car will stop.

It sounds complicated, but it makes for a very short, efficient boarding process. The train stops. Everyone is already standing just where they need to be (in a neat line) to step into the right car. Now you just have to find your seat in that car. Of course, if you arrive last minute, you can still board anywhere and walk along the aisle inside the train. It’s just easier and quicker to find your seat if you line up in the right place before the train arrives.

Don’t worry, by the way, if you don’t have a reservation. Unless it’s a public holiday, your chances of getting a seat are still probably high. If you don’t have a Japan Rail Pass, you’ll still need to buy a ticket, but it won’t have a car and seat number on it. Look on the electronic sign; it’ll usually indicate which cars are for unreserved tickets. Or it’ll say in the signs along the platform as described above.  If you think it might be crowded, make sure to get to the right spot early, since people queue up in a neat line at each marked spot along the platform. Be first in line!

8. Traveling by train during rush hour

For local trains you can’t reserve; just buy a ticket and step on anywhere. If you’re a woman and it’s rush hour, you might want to choose one of the cars designated for women only.

Apparently, given the way people pack into the trains during rush hour, many women get groped in the process, which has led to these women-only cars. I never experienced either a women’s-only car or groping, but that’s because I avoided rush hour. It’s vacation, after all!

Don’t worry if you don’t manage to get into a train because of the crowds. During rush hour the trains run extremely frequently, so you’re unlikely to have to wait very long.

I figured this all out gradually, bumbling my way through Japan, over the course of the first few days of my two-week, solo Japan Rail journey. By the end of the two weeks, I was navigating through the system smoothly and seamlessly, without having to search for Japan Rail employees who spoke English and ask them lots of questions. Follow these Japan travel tips and you’ll be able to do the same thing, without knowing a word of Japanese!

Have you ever experienced train travel in Japan? Do you have any words of advice to add?

If you found this article helpful, please share it on social media! The images below are formatted for Pinterest.

This post is part of the Travel Photo Thursday linkup. Check out the other travel blogs below for lots more travel ideas and advice. And if you have a travel blog, make sure to add yours to the linkup!