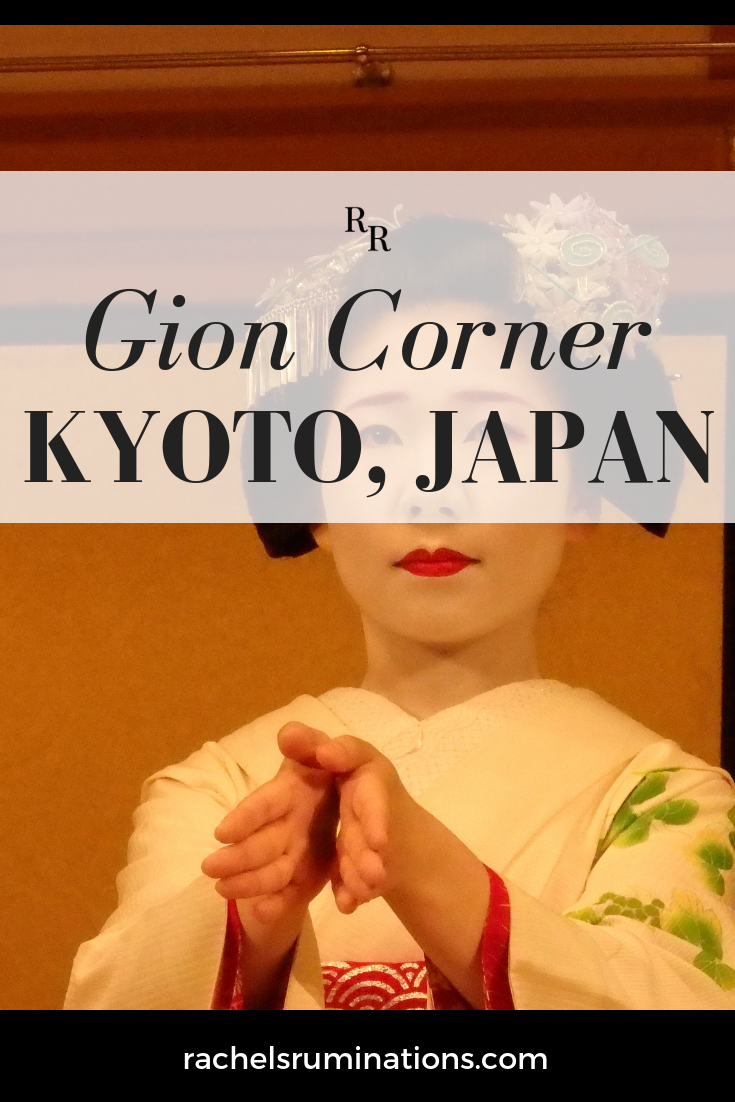 A show that’s produced for foreign tourists can be an insulting oversimplification of local culture, or it can be an interesting peek into that culture. I wasn’t sure which I was getting when I agreed to go to a performance by Kyoto Traditional Musical Art Foundation  at a venue called Gion Corner, in the famous Gion district of Kyoto.

I’m still not sure what I got. Since I went to Gion Corner with another foreign tourist, and she didn’t know any more about it than I did, we missed the input of a local person to tell us how respectful and authentic it was. I can say, though, that one young Japanese woman, sitting in front of me with some foreigners, spent the entire hour-long performance with headphones in her ears, staring at her phone.

The performance was very simple and straightforward: no multimedia besides microphones and speakers, no fancy effects. Just one demonstration of a traditional art form after another. Before each one, a voice would explain, first in Japanese and then in English, a bit about what was coming next in a very straightforward, unsensational way.

As we filed in, an older woman in a kimono was carrying out the ritual tea ceremony. According to the pamphlet I received as I entered,

This is the embodiment of the Japanese people’s intuitive striving for the recognition of true beauty in plainness and simplicity. Such terms as calmness, rusticity, gracefulness, or the phrase ‘aestheticism of austere simplicity’ may help define the true spirit of the tea ceremony.

That idea of beauty in simplicity certainly was evident in all the elements of these Gion Corner performances.

Two kimono-clad women played a piece on these traditional harps. The music sounded simple and sweet, though watching them perform showed that these are not simple instruments to play.

The woman who arranged flowers in a vase did each action in a very formalized, almost mechanical way, with no extraneous motion. While I’ve never seen flower arrangement as a spectator sport, it was interesting to see how she produced an asymmetrical, yet attractive, design. The pamphlet describes it as “suitably simple, natural, and symbolic arrangements.” I saw the simple and natural part, but I couldn’t really see any symbolism in the arrangement.

This was my least favorite part of the Gion Corner performance. The man in costume was fun to watch, in that he did a series of stylized movements and poses, and his costume was just so fascinating.

The problem was the music that backed him. Apparently, “Gagaku” means “elegant music,” but to my untrained and probably terribly culturally-insensitive ear, it was awful: atonal, shrill, sometimes squeaky and sometimes hitting just the right high note to drive the sound into my skull, making me wince.

This part of the show made me think they’re really not selling out to suit a Western audience. While this comic play included some rather slapstick elements, it also included a lot of dialogue, delivered in an over-the-top, staged way, at least to my Western sensibility. Given that most of the audience couldn’t understand it, respect for the tradition shows in their unwillingness to change it. The pamphlet we were given did have a summary of the plot, but unfortunately I didn’t think to read the pamphlet till afterwards!

I was most eager to see this part of the program: a dancing Geisha (actually, a Maiko: an apprentice Geisha). The dance was extremely formalized: a series of movements and poses, often slightly flirtatious-looking. I didn’t record it all, but the video below is the first two minutes of her dance.

While this does not strike me as an energetic dance—she didn’t get out of breath—it is very precise, down to the movements of her fingers and eyes. I suspect it took a lot of practice to reach that level of precision. It emphasizes again the simplicity and plainness that were/are seen as a virtue, but at the same time the amount of effort that goes into achieving that effect.

To my Western eye, this was the strangest of the arts we witnessed. After all, while the puppeteers were able to manipulate the puppet very skillfully, they were fully visible the entire time! To me, that just spoiled the effect, even if they were covered in black cloth from head to toe. Not only that, the story that they were dramatizing, according to the information pamphlet, was a love story, yet the puppet play only showed the female character. The voiceover, entirely in Japanese, presumably explained the story, but it was odd to see the puppet go through such a series of movements without understanding what she was responding to.

The fact that each of these arts was demonstrated one at a time, simply, without any attempt to combine them or jazz them up or modernize them in any way, speaks well for the authenticity of each program element. Yet how can I even know that much? Perhaps they were modernized in some way, and I just couldn’t recognize it. Without a local’s interpretation, I can’t say.

I do know that they are presented in Gion Corner out of context, and in a shorter than traditional form. For example, a Maiko would not normally have danced on a stage, but rather for private parties.

In any case, I enjoyed it, particularly the harp segment and the dancing segment. Kyoto is particularly associated with Geisha culture, so it seemed a fitting place to witness this.

Attending a performance at Gion Corner

Getting there: The performance is at Yasaka Hall at Gion Corner.