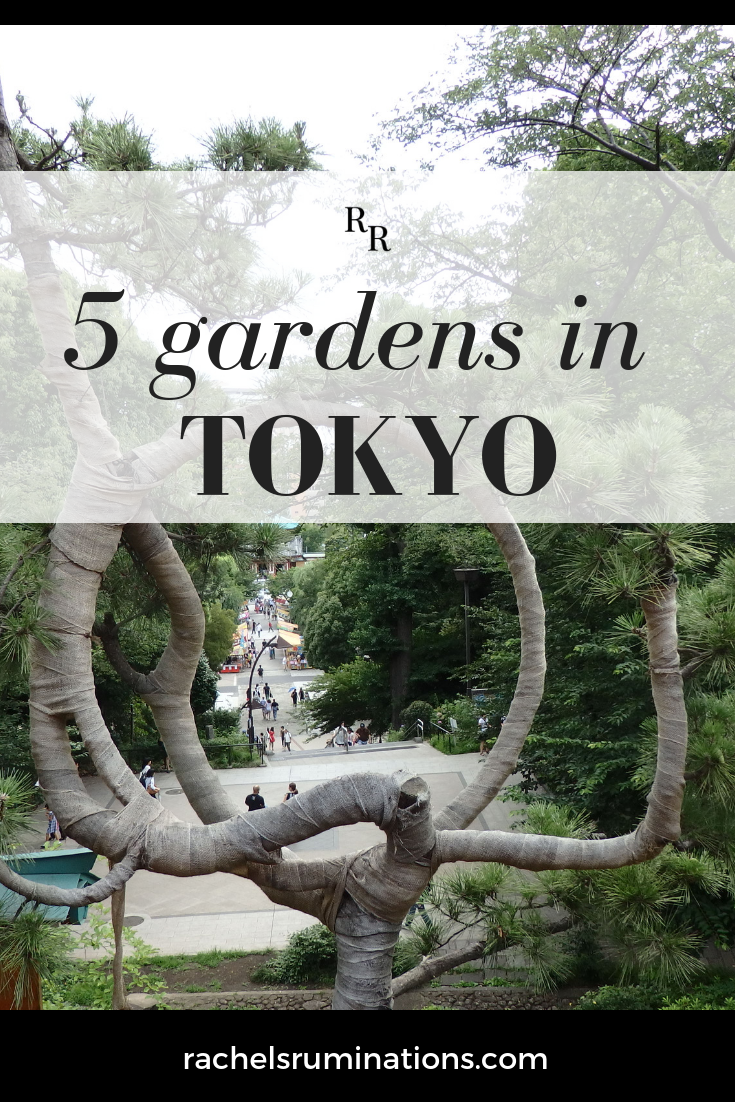 I’m not particularly into gardens. I enjoy them, but don’t enjoy gardening. I visited a few gardens in Tokyo partly because I was curious about Japanese gardens in particular, and also curious as to how they are used by people in such a big city. But mostly I went to them because I wanted to visit a temple or castle, and the garden was part of the package.

I visited a number of different Tokyo gardens and each had a different atmosphere.

Atago-Jinja temple has a tiny, but wonderfully peaceful, garden. The temple is on a hill that used to be the highest point in Tokyo. To get there involves climbing a very steep stairway, though fortunately it’s not very long.

The temple is small and pretty, and the hill is forested, which meant some very welcome shade in the heat. A small pond with koi—which seems to be a requirement for a Japanese garden—is surrounded by neatly pruned shrubs. Trees shade the clearing in front of the temple and it’s easy to ignore the clangor of the traffic below.

Of all the Tokyo gardens I visited, Ueno was the best for people-watching. That may have had to do with the fact that it was Sunday, when many Japanese are off work.

It was crowded with families and young people taking part in all sorts of activities: eating and walking, of course, but also bird-watching and swanboat rides, listening to buskers, watching acrobats, and more.

Ueno Park is known for its cherry blossoms in the springtime, long past when I was there. A lake in the park, though, is covered with lotus flowers, which were just beginning to open when I visited.

Meiji-jingu is a Shinto shrine set in 70 hectares of forest, once owned by the Meiji emperor. It’s more of a forest than a garden, so it’s much less manicured and tidy. I liked it better than the formal gardens for its wildness and its dripping, humid, shadiness. The shrine is impressive in size as are the massive tori (gateways) leading to it. None of it is particularly old, though, since the original temple was destroyed in the Second World War.

Unfortunately, the whole forest is wired with loudspeakers that from time to time, in both Japanese and English, belt out instructions about what’s not allowed within the gardens, such as smoking.

Hama-rikyu Garden is one of nine Metropolitan Cultural Heritage Gardens in Tokyo. Once containing a palace of the Imperial Family, it has a similar story to many “historic” places in Tokyo: it was virtually entirely destroyed in the war, so the buildings you see within the garden now are reconstructions. The pond, interestingly, is saltwater, fed in from Tokyo Bay.

Hama-rikyu is much more formal than Meiji-jingu, with every inch of land carefully manicured. It’s big and mostly flat and includes some wide open, grass-covered spaces, and also some shadier parts, with shrubs that are all pruned into rounded blobs. The teahouse, picturesquely set on a pond, but with tall office towers looming over it, offers traditional powdered green tea and Japanese sweets.

This garden is formal and includes a large open, grassy space. Unlike at most gardens in Tokyo, the grass wasn’t off limits, so people were letting their children play on it, though it was too hot to spend a lot of time lounging. The remaining moat walls are impressive, and the ruins of the original castle keep (Now long gone: the current Imperial palace is modern.) can be climbed to see the view over the garden. Unfortunately, it doesn’t afford a view into the rest of the Imperial Palace Gardens.

There are other gardens in Tokyo, so this isn’t a complete list, (Click here for a more comprehensive list.) but the variety in the Tokyo gardens I visited surprised to me. My favorite Tokyo gardens are the small, more detailed ones, like Atago-Jinja or any of the gardens of the many shrines in Yanaka. On the other hand, the Ueno Garden was by far the best in terms of people-watching.

With so many options, you should be able to find a piece of nature to your liking near you wherever you go in Tokyo, or at least a carefully-groomed version of nature. In a big, overwhelming city like Tokyo, you’ll need it!

Ueno Park: Next to JR Ueno Station. Many museums are within the park boundaries, most of which are open from 9:00-17:00. Admission fees to the museums vary. You can get specifics here.

If you’ve been to Tokyo, do you have any favorite Tokyo gardens that you’d recommend?

I am a co-host of Travel Photo Thursday! Please take a look at the participating blogs below. If you have a blog and would like to be included, use the button below to add yours to the list, and make sure to link back here in your post!