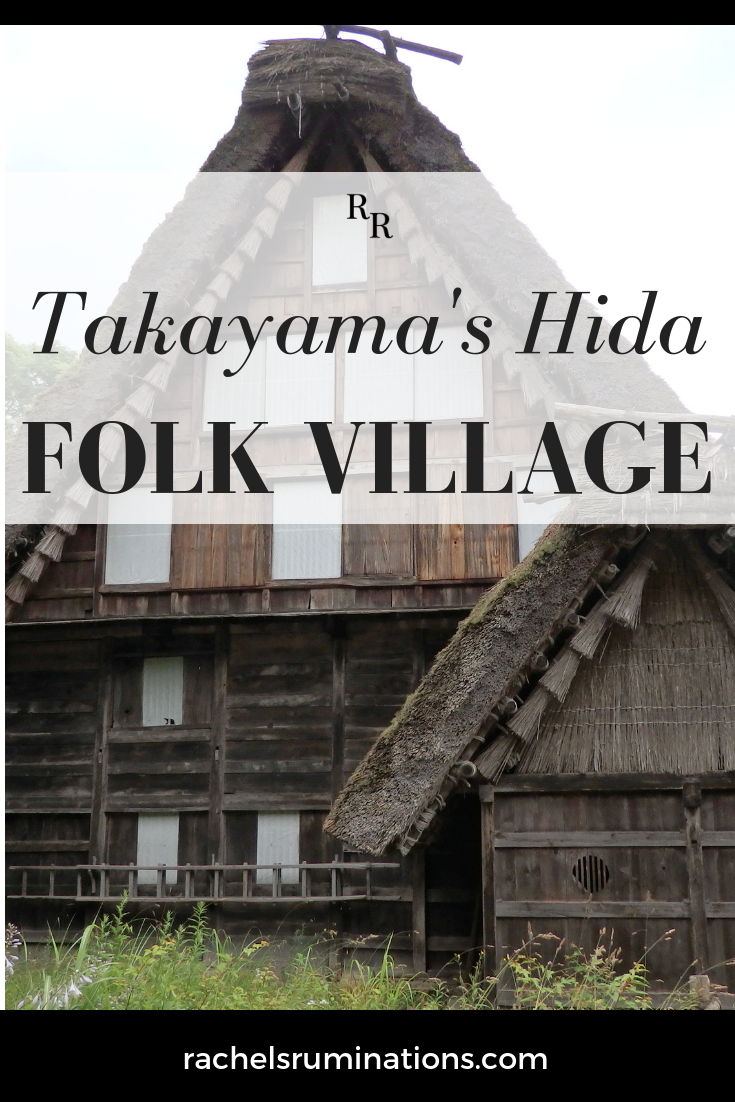 If you read this blog at all regularly, you’ll know that I particularly enjoy visiting historic buildings: the more authentic the better. That’s why one of my goals in visiting Takayama, Japan, was to see the Hida Folk Village just outside town.

(Disclosure: This article contains affiliate links. If you buy anything through them, I will receive a small commission. It will not affect your price.)

The Hida region around Takayama is mountainous, so the traditional buildings generally have thatched or shingle roofs, peaked steeply so snow won’t build up too much. In the 1970s the region was modernizing rapidly and traditional houses were disappearing. More than 30 of these Hida traditional houses have been moved to form this open-air museum in Takayama.

Set in the foothills, surrounded by forest, it’s easy to imagine this as a living village. Visitors can choose a wheelchair-accessible 15-minute route, a short 30-minute route, a one-hour route, or add a climb up the mountain to see some castle ruins, if they have more time and energy. I chose the one-hour route and thoroughly enjoyed poking around these beautifully-preserved houses.

Most of them were originally farmhouses, but ranged from very basic to more highly-decorated and polished, and they are set up so that visitors can see how each room was used. A small hearth set into the floor in the middle of each living space offered warmth, and the museum keeps some wood burning in each home so that we can more clearly imagine how the home must have smelled.

The ceilings are generally low, except on upper floors, and most of the floors are made of polished wood planks, sometimes covered with tatami mats, sometimes bare. As is traditional to this day in Japan, I was expected to take off my shoes on entering each house. In this Takayama museum, I was happy to do so: the old wood I walked on seemed to have personality of its own. I felt the patina with my bare feet, felt the boards that bent under my weight, and heard them creaking with age.

In general, the houses are unfurnished, though here and there various implements are on display: farm tools or equipment for crafts such as weaving or raising silkworms. In any case, historically they wouldn’t have had furnishings in a Western sense: tatami mats on the floor; futons, which the residents would roll up and put away during the day; cushions to sit on; and perhaps a low table or two would have been all the furnishings. Every house, though, had an altar, usually in a built-in cupboard, some more ornate than others.

Part of the goal of this open-air museum is to preserve cultural traditions as well as buildings. In one of the houses an old man worked, weaving straw into sandals. In another, a woman operated a loom. In another, a woman sewed small dolls. Each one greeted me as I entered, but then went quietly back to work. For a price, any craft that was being demonstrated could also be tried out, which would make it a fun museum for children.

While most of the buildings were farmhouses, I also visited a mill building, a temple, and various small outbuildings and storehouses, all saved from destruction or deterioration in the surrounding region. It took me distinctly more than the suggested hour—I would guess about two hours or more—because I was so busy soaking in the atmosphere of the place. That feeling was enhanced by the fact that, while there were other visitors, there were no tour groups with loudspeakers to amplify the tour guide’s voice or generally disturb the peace.

It must not be a very popular or well-known place to visit, compared to other sites in Takayama. This museum deserves more attention, but I was glad for its obscurity when I visited.

Hida Folk Village is a 20-30 minute walk from JR Takayama train station, or you can take the bus from the bus station next to the train station. That will take about 10 minutes. Open 8:30-17:00. Admission: ¥700 (about €5.50 or $6.25). Alternatively, you can sign up for an all-day tour, incorporating Takayama Hida Folk Village, the living village (and UNESCO site) of Shirakawago, and a bit of shopping.