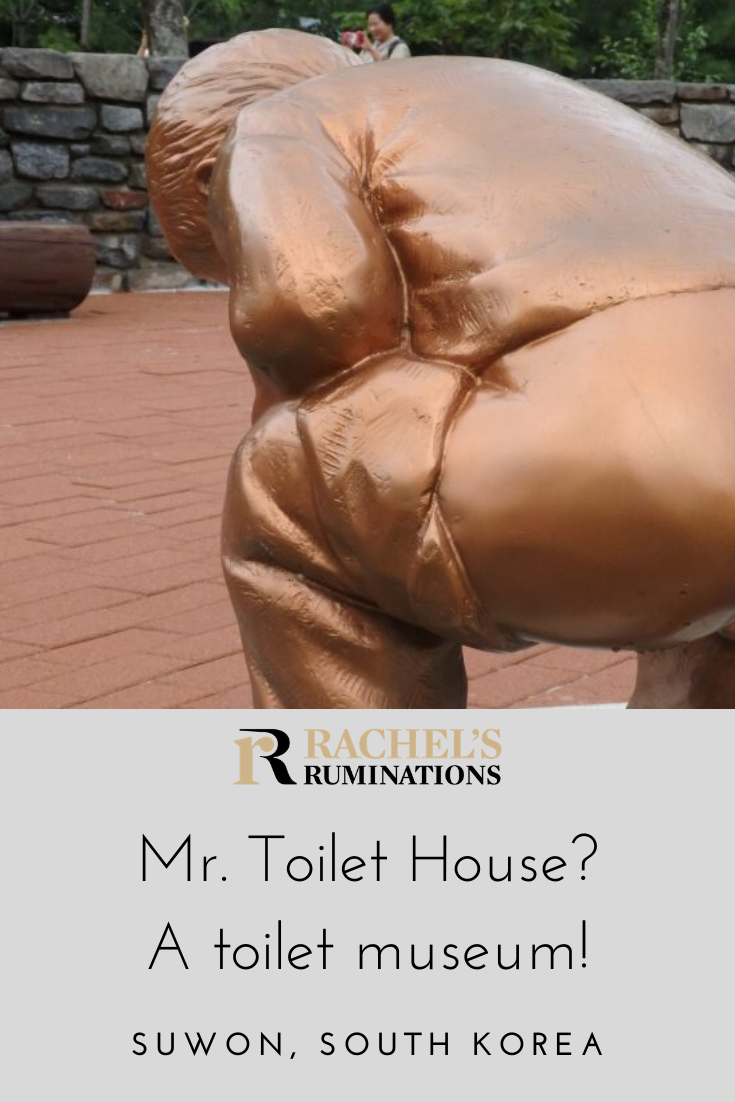 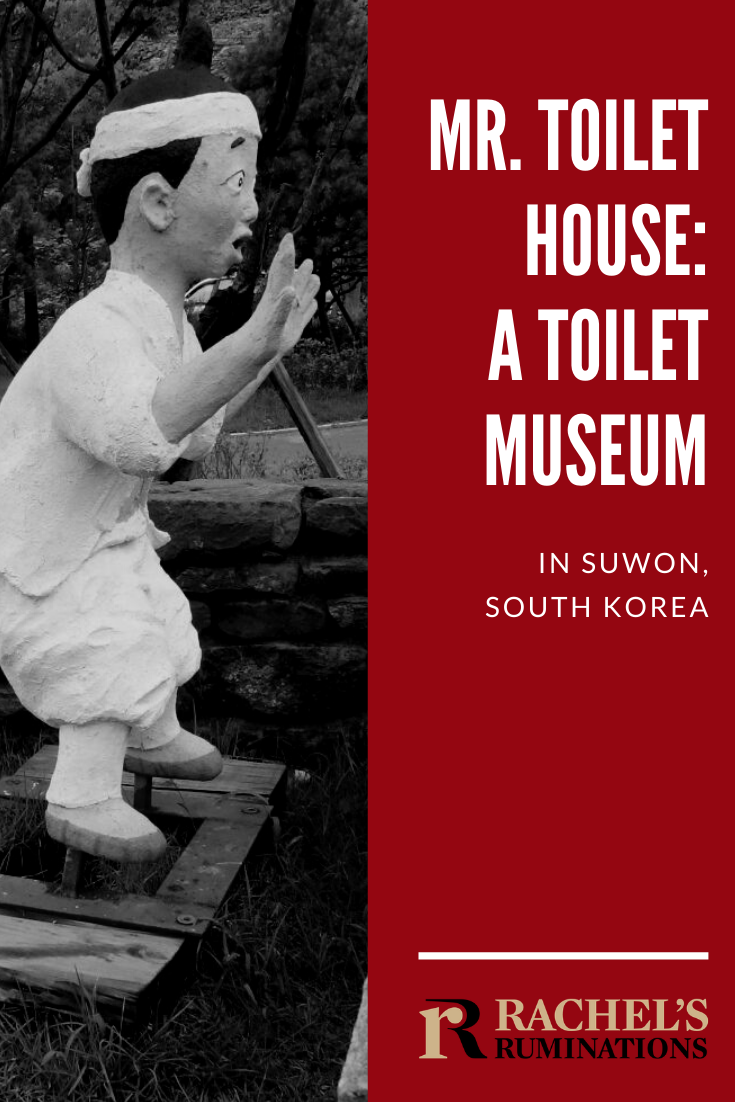 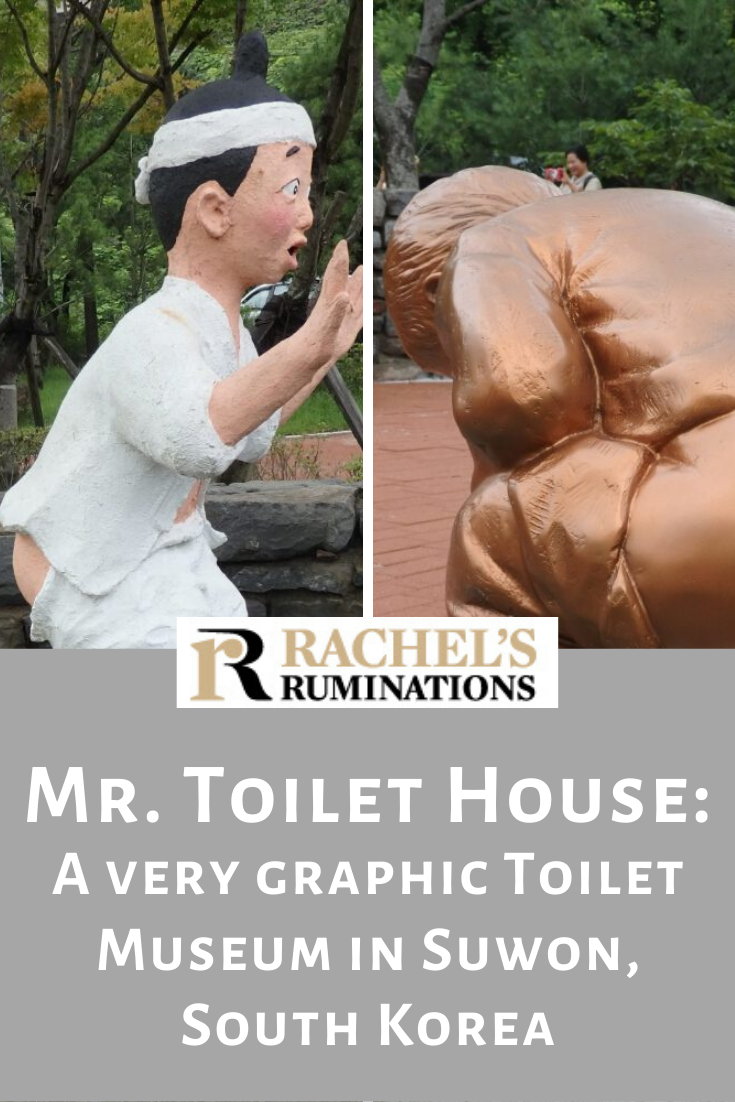 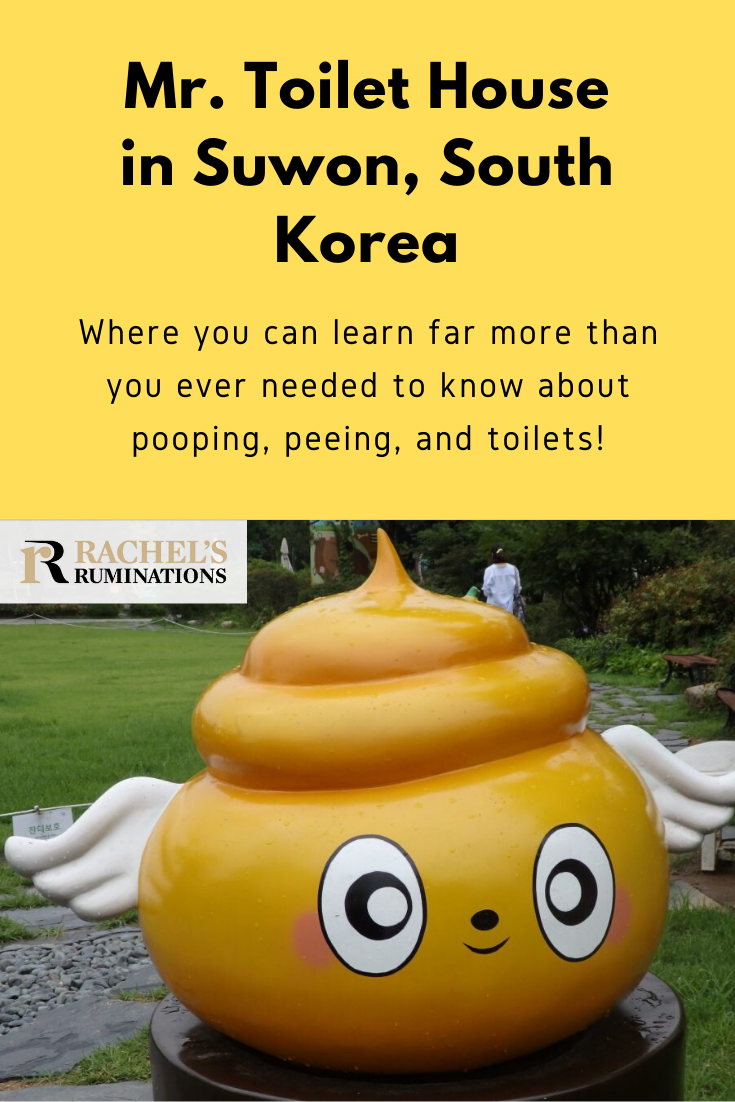 The big gold-colored statue of a turd right next to the entrance was enough to tell me that Mr. Toilet House, the toilet museum in Suwon, South Korea, wasn’t going to be a disappointment!

Believe it or not, “Mr. Toilet House” is the popular name for the Toilet Culture Museum in Suwon, just south of Seoul. I hadn’t even heard of its existence until I arrived in Suwon, where my plan was to visit the Suwon palace and the fortifications of the historic town.

If you’re a regular reader of this blog, you know that I particularly love quirky little museums. They’re fun to visit and fun to write about. So, a toilet museum? I really had to see that!

When I asked about the museum at the Visitor Information Center in Suwon, next to the train station, the man there proudly pulled out his wallet and showed me a business card he carried with him. Not only did he have Mr. Toilet’s card, but it had even been autographed by Mr. Toilet himself.

The founder, Mr. Sim Jae-duck, who became known as Mr. Toilet, was clearly obsessed with all things toilet related. The story goes that he was actually born in an outdoor toilet and got teased about it as a child. A Freudian psychologist would have a field day with this!

A Freudian psychologist would have a field day with Mr. Toilet's story! #toiletmuseum #mrtoilethouse #suwon #toilets Click To Tweet

Mr. Toilet grew up to become mayor of Suwon and founded his World Toilet Association in 2007. Its mission statement is:

For the humans’ dignity and their healthy lives, let world know the importance of toilets to public health and sanitation, as well as establish advanced toilet culture and contribute to humanity.

All worthy and important ideas, of course, and the World Toilet Organization, a different NGO based in Singapore, would probably agree with them. The WTO was also founded by a man name Sim; I have no idea if they are related.

Mr. Toilet died in 2009, after which his family donated their house to become a toilet museum. (Factoid: There are other toilet museums in New Delhi, India and Kyiv, Ukraine.)

It isn’t surprising that his family would want to give the house away; Mr. Toilet’s obsession went so far that he redesigned his house so that it looked like a toilet. Not only that, the actual toilet in his house wasn’t hidden away, off to the side, like it normally would be, but sits right in the center of the ground floor. A full-size glass window allows the person sitting on the toilet to see through what I assume was their living room into the garden. If he wanted privacy, one flick of a switch turns the window opaque.

Think about this for a minute: he could see into the living room from the toilet. This meant that anyone in the living room at that particular moment could see him as he was doing his business, whether he was sitting on the toilet or standing at the urinal. Could they have a conversation? And if so, wouldn’t other sounds (and smells!) carry as well?

The living room, as well as the rest of the house, has been converted to gallery space, displaying information about toilets, of course.

If you’re planning a trip to this museum, book your accommodations in Suwon here. Suwon is quite near Seoul, and you could certainly see the museum as a day trip from Seoul. Book your Seoul accommodations here.

It really gets hilarious—and somewhat graphic—out in the garden, where statues illustrate various facts about toilets and their history. At the entrance to the garden, the first statue is of “Toile,” a sort of golden turd with little wings. It’s the museum’s mascot. Why Toile has wings? I have no idea!

Displays in the garden show toilets used around the world and throughout history: chamber pots, a Roman toilet, urinals, etc. It’s the statues of people that set it all up for ridicule. Most are metal, some are plaster, but they demonstrate the use of the facilities in graphic detail. How can you not laugh at these?

As you can imagine, children would have a great time at the toilet museum. Across the road from Mr. Toilet House is a Toilet Culture Center. (This is also where the actual working public toilets for visitors are.)

The Toilet Culture Center includes the observation point (i.e. the roof) which allows visitors to get the full view of Mr. Toilet’s toilet-shaped house.

On the second floor is an interactive space for children. They can learn about poop and how it should look if it’s healthy, slide down a slide inside a huge toilet, sit on a seat that makes a farting sound, and learn the answers to why people fart. Unfortunately, while some of the questions are translated into English, many of the answers are only in Korean. If you bring your kids, make sure to do some studying up on excretory functions before you go, so you can answer their questions!

Getting to Mr. Toilet House

A word of caution: the museum is not easy to find. A tourist bus goes there, in theory, but at the visitor’s information center next to the train station I was given directions to a city bus and some complicated instructions on how to find the museum once I got off the bus. It took about 45 minutes to get there, and my visit was about the same, though with kids I suppose it would be more.

Take Express Bus number 7790 or 7800 from Sadang Station. From the subway, take line 1 to Sungkyunkwan University station. At the 4th station exit, take a local bus: many buses pass nearby the museum, so ask at the bus stop. Whatever bus you take, get off at Dongwon High School and walk about 500 meters northwest from there.

I’d highly recommend just taking a taxi! They’re not expensive in Suwon, and the trip would be considerably shorter and easier that way.