Seoul Tower, perched on Namsan Mountain above Seoul, is visible everywhere, looking like some sort of 70’s version of the future. Built back in the 70’s for radio and television, it was and still is a communication tower. 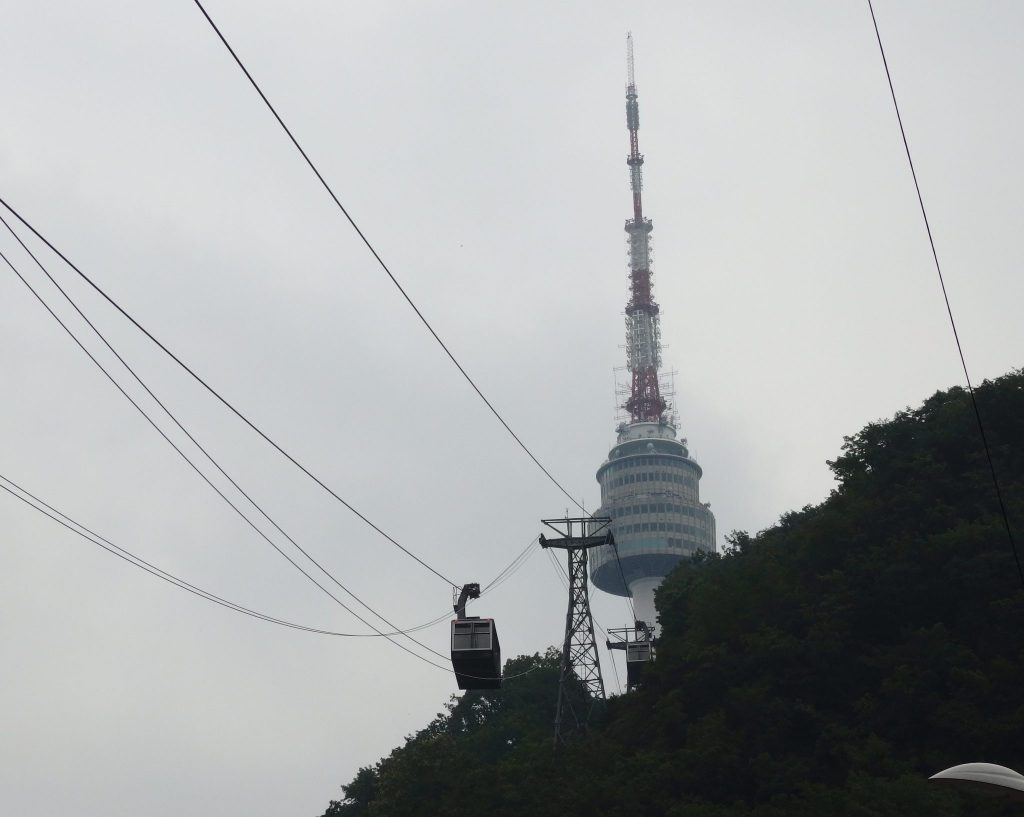 the cable car with Seoul Tower in the background

However, it’s also a destination for tourists and locals: a thing to do on a free weekend afternoon. (Their website’s slogan: “Where your love comes true. Now have a happy date at N Seoul Tower!”)

I wasn’t going to visit Seoul Tower until I was studying a map of Seoul one day, planning what I wanted to see next, and noticed something marked right next to Seoul Tower: Teddy Bear Museum. Quirky little museums are my thing, so I decided to go check it out.

Getting up the hill to Seoul Tower is free, theoretically speaking, and it’s only about 200 meters high. However, by this time I’d developed a new hernia in my neck and figured that such exertion in 32-degree, near-100-percent humidity Seoul might not be a good idea.

That left two options: bus or cable car. The bus would be distinctly cheaper but would take longer, and, after two other cable car rides this trip (to the Big Buddha in Hong Kong and up to the monastery above Himeji, Japan), I was feeling pretty brave.

Eventually, packed into the cable car with what seemed like a hundred people, but was probably more accurately about 25, we rose smoothly to the top in all of about three minutes. It was too full to take any decent pictures, and it was too full for me to feel particularly brave. No one seemed to be counting how many people were packed into the cable car. Isn’t there a weight limit? 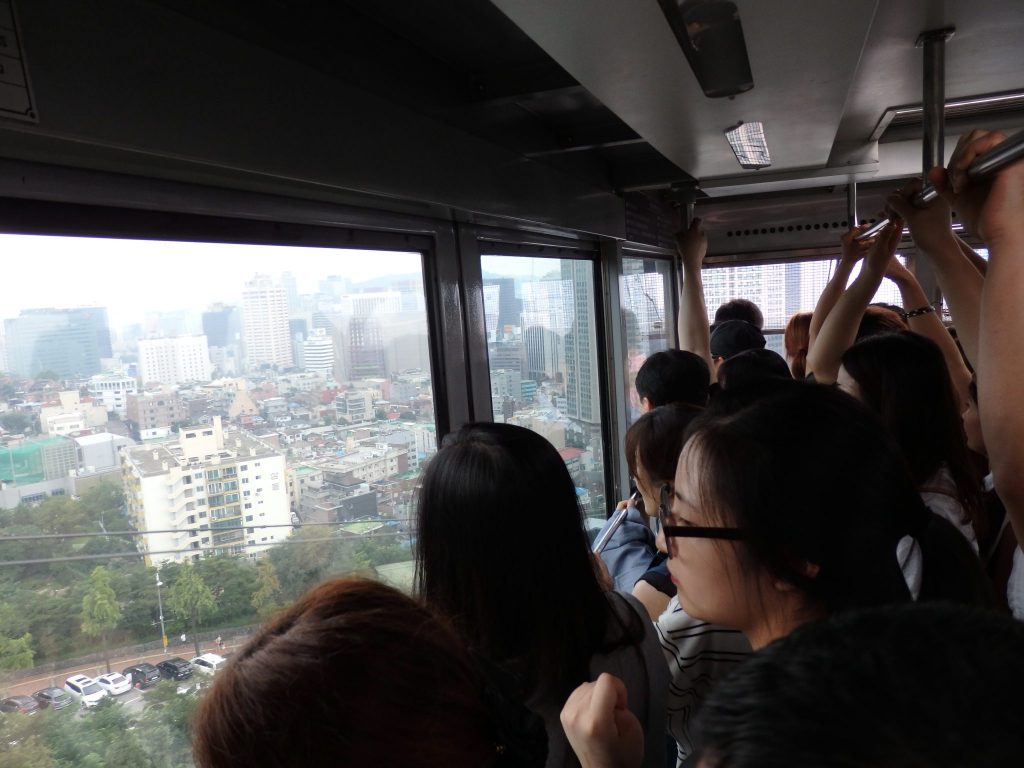 inside the cable car up to Seoul Tower

The mountain is wooded and the top is mostly paved and tree-shaded, with various walking paths leading off it. Glimpsing them from over the side, it looked like the paths were far less crowded than the top. It might be a good place for a stroll or jog on a cooler day, much like the Victoria Peak path in Hong Kong.

It was Sunday, and it was absolutely mobbed. There seemed to be three different types of people up there: Korean families with grandparents and children out to enjoy a day together, tourists like me, and dates. 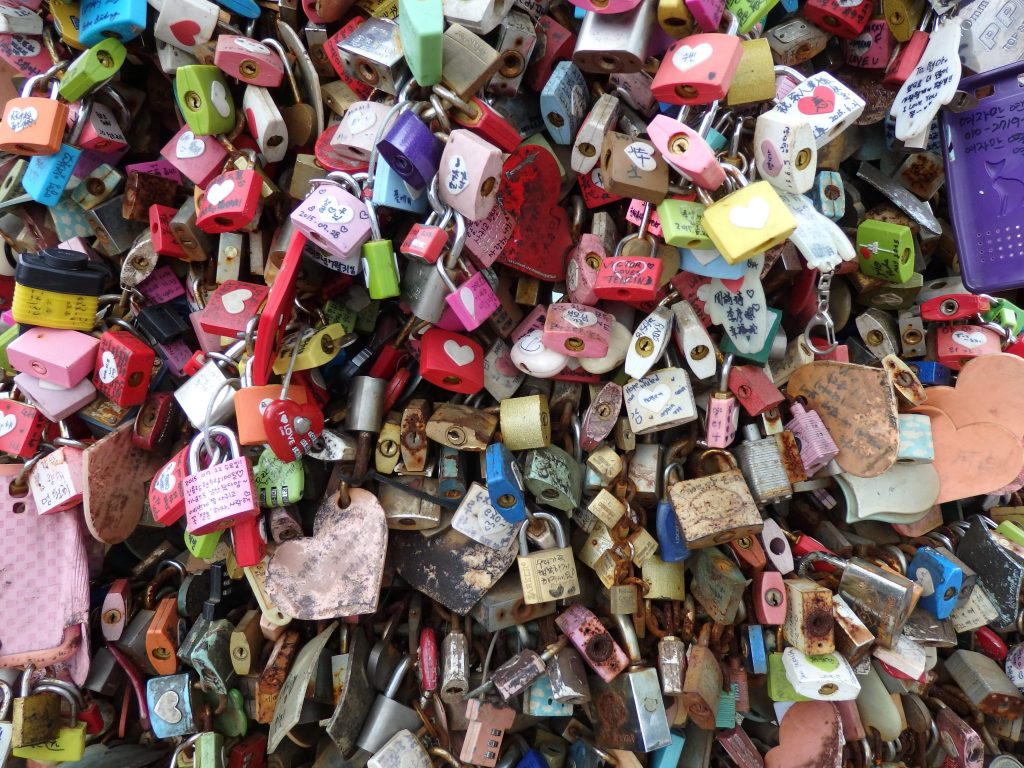 The importance of Seoul Tower as a date destination is demonstrated by the buildings at the base of the tower itself, which are covered with locks, presumably imitating the Pont des Arts in Paris which has recently been cleared of locks. This area seems to have been set up to accommodate locks: several tree-shaped structures on one side and a very conveniently located railing were completely covered, with many of the locks actually attached to other locks rather than to the railing itself. It also looked like someone is making a killing off selling the locks: so many of them were the same few brands. 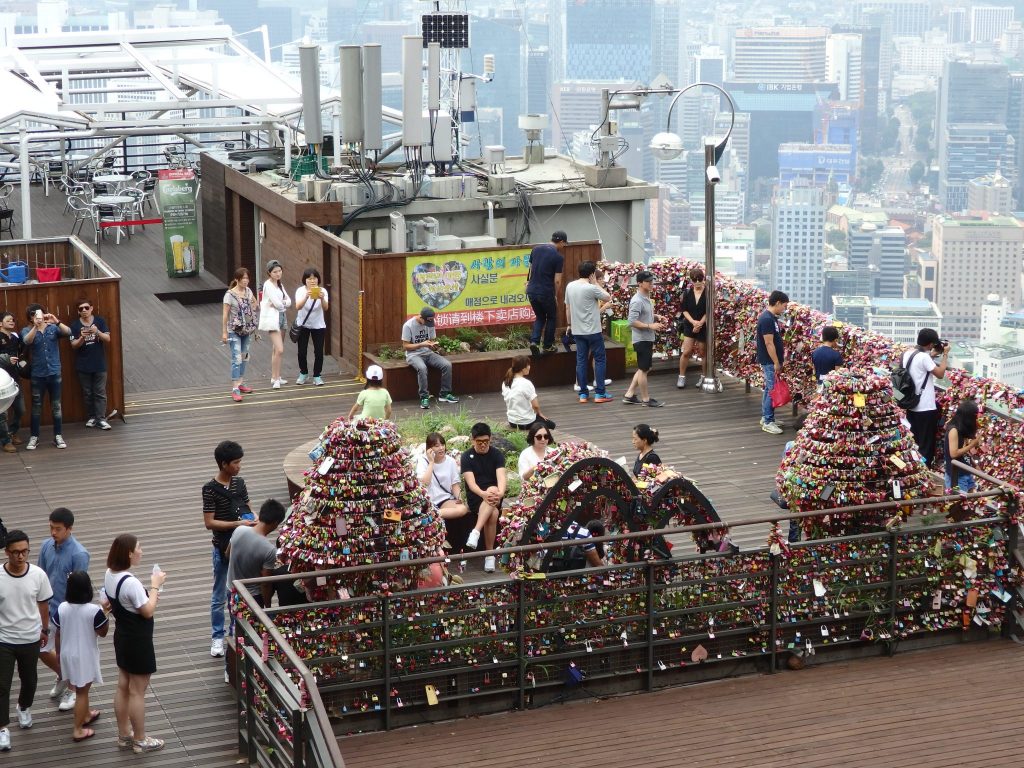 Locks cover the railings and other structures at the base of Seoul Tower.

This place reminded me more than anything else of Pier 39 / Fisherman’s Wharf in San Francisco. It’s a place designed specifically to draw tourists willing to spend money. The base of the tower is surrounded outside with restaurants, mostly offering quick, unoriginal, and very expensive food. An ice cream cone cost as much as I’d been spending for a whole dinner in the city below.

“Craft” stalls were set up outside, though what they were selling looked mass-produced. Inside, the shopping opportunities continued. I entered the basement floor briefly, looking for a rest room, and found the same kinds of chain gift stores you’d find at Fishermen’s Wharf. 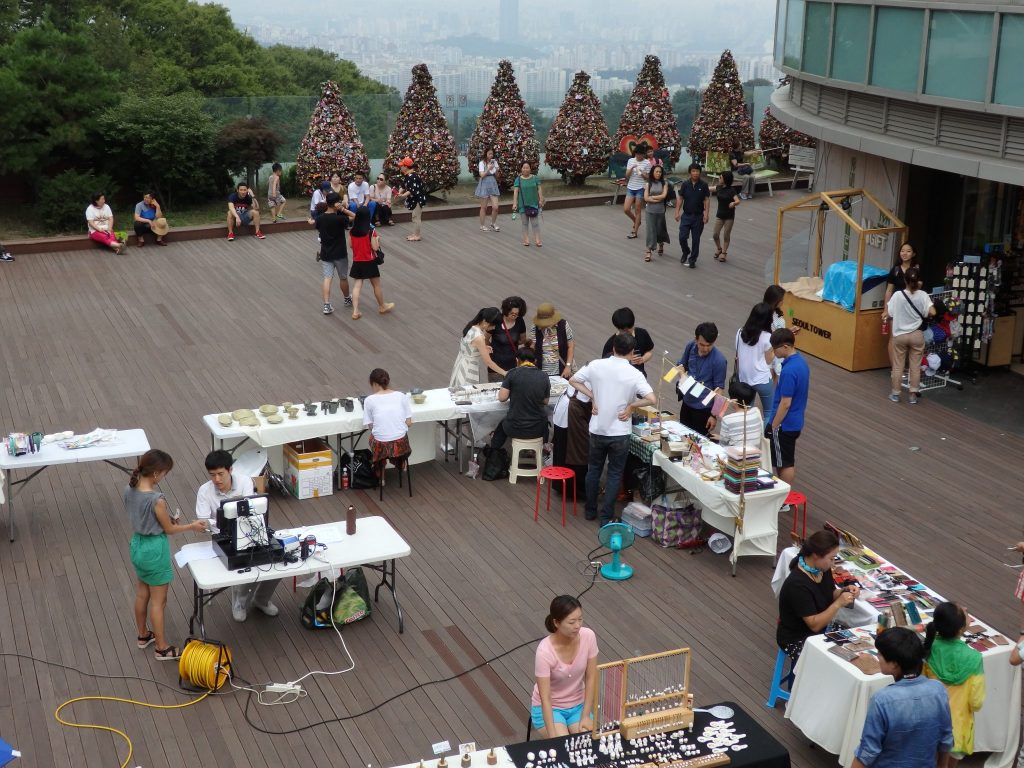 Crafts tables. Those “trees” in the background are actually metal structures covered with locks.

Going up the tower requires an admission fee, starting at 9000 won (€9) to reach the tower’s viewing level. I decided not to spend more than I’d already thrown away on the cable car. Perhaps if the day had been clear, but it was August, and August in Seoul seems to be a continuous flow of gray, hazy days, sometimes descending into rainfall, but never enough rainfall to clear the haze. 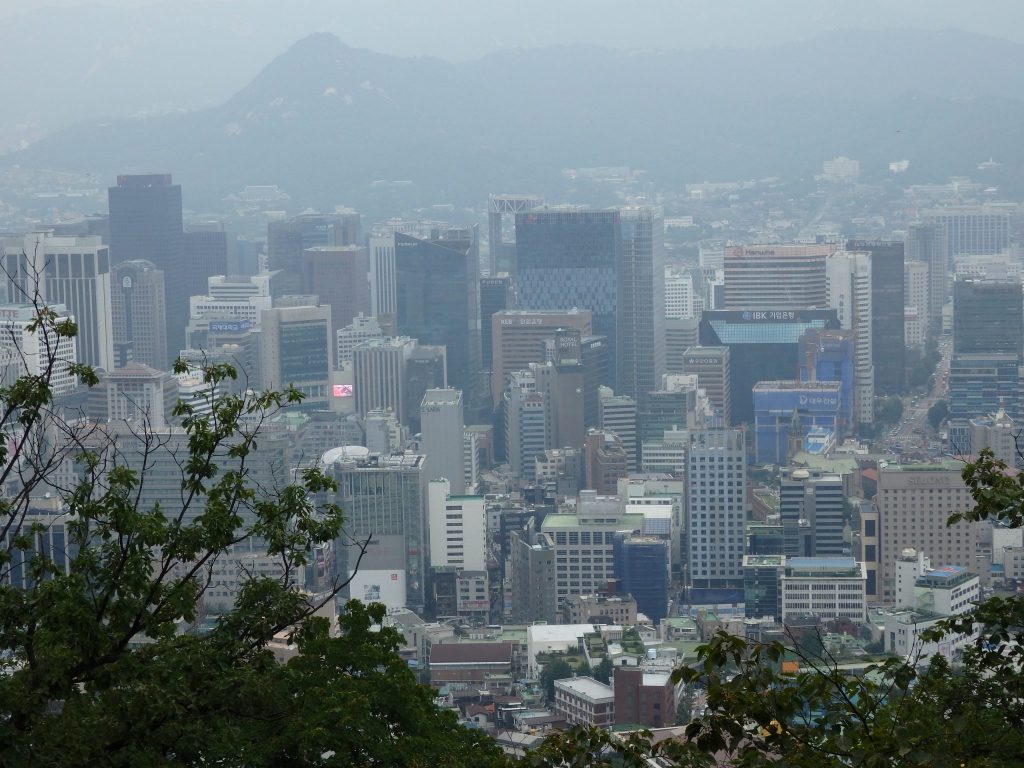 a view from the base of Seoul Tower: so hazy!

In other words, the view wasn’t clear from the base of the tower. I couldn’t imagine going higher would make it any better.

I did pick up a flyer for the “Alive Museum” inside the tower, which, as far as I could tell, charges 15000 won for the privilege of taking lots of digitally-enhanced selfies in front of funny backdrops. You can pose as Rhett Butler and Scarlett O’Hara in a movie poster for Gone with the Wind, or look as if you’re clinging to the top of Seoul Tower à la King Kong on the Empire State Building. I can see that it would be fun with a date but, without the selfie stick everyone else seemed to have in Seoul, and visiting by myself, I just couldn’t see myself enjoying it.

I walked around the top of the hill (the base of the tower), took a few pictures down into the haze, watched a few of the portrait artists at work, and went in search of the Teddy Bear Museum, the whole reason I’d decided to go there. 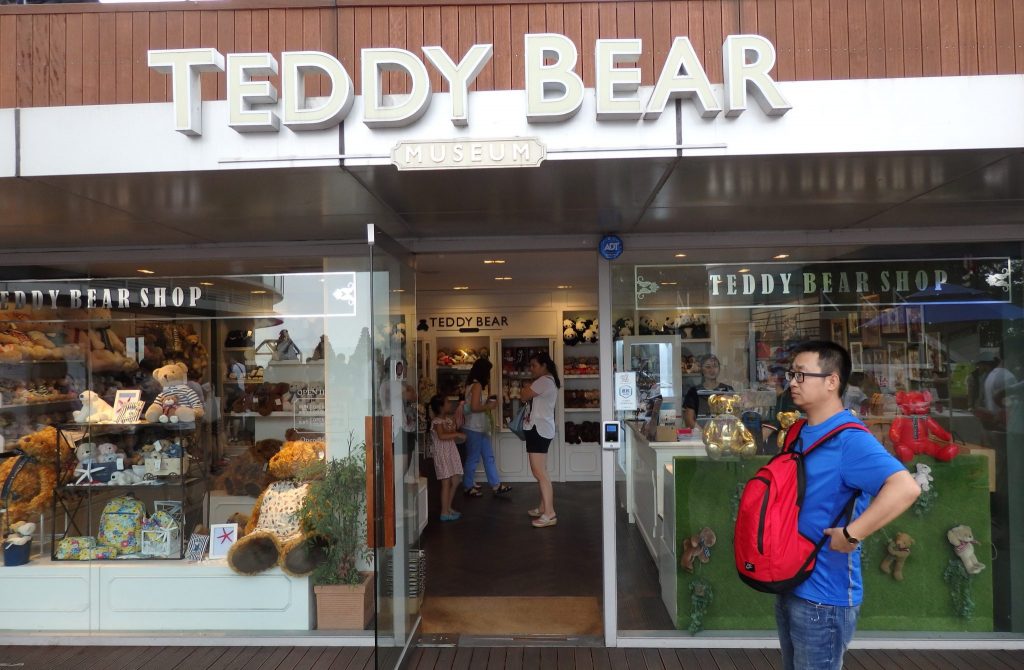 Braving the cable car down—I couldn’t even face the idea of walking down in that heat—a pair of giggly Thai girls on vacation insisted on a selfie with me. Why would they want my picture? And again it was too crowded in the cable car to get any good photos of the view.

Would I recommend visiting Seoul Tower? Only in two situations:

I am a co-host of the Travel Photo Thursday linkup. Add your link below if you have a travel blog, and make sure you add a link back to here. If you don’t have a blog, check out the links below for some great travel writing and photography!