On my recent trip to South Korea, my left arm began to hurt. I dismissed it as a muscle ache, probably from carrying my luggage up and down metro stairs.

Little by little, though, it got worse. I couldn’t sleep because I couldn’t find a position in which my arm didn’t hurt. When my arm started tingling, two of my fingers went numb, and I had only slept fitfully for three nights, I decided it was time to see a doctor.

I was in Busan, and my Airbnb host helped me find a hospital. Searching on-line, we found Good Moonhwa Hospital, which had a website in English and, in advertising, claimed to be available for foreign visitors.

Arriving at the hospital via metro, I was pleased to see that one section of the reception desk had a sign indicating it was intended for foreign visitors. The woman there, though, silently signalled to me to wait and summoned a man from an office behind her. He spoke passable English and asked what my problem was.

I explained about my arm and the tingling and that I’d had a hernia before. I asked to see a neurologist. I didn’t really expect to see one at such short notice, but I thought it was worth asking. The man told me to wait and went away.

After only a few minutes, a nurse walked up to me and, in English, asked me to come with her. Leading me to the elevator and then through a warren of hallways, she brought me to a doctor’s office. 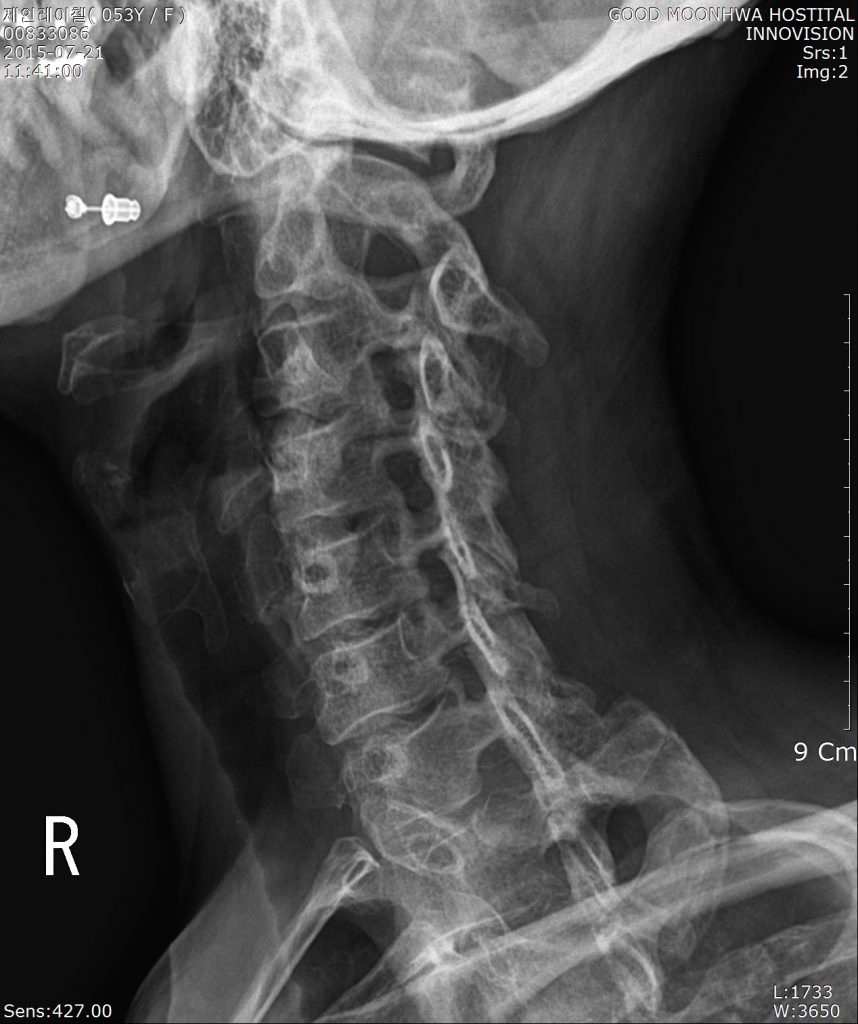 an x-ray of my neck

After she ushered me to a seat in the hallway, I waited, with the nurse beside me, making small talk.

She still looked puzzled, but nodded and smiled politely.

It was only a matter of minutes before another nurse opened the doctor’s door and signaled me that it was my turn. I wasn’t surprised to find out the doctor I’d been assigned wasn’t a neurologist; he was an orthopedist. He couldn’t talk to me, however: he didn’t speak English. Instead, the nurse who’d been waiting with me, whose English clearly wasn’t stellar, translated for him. (There were two other nurses in the room, by the way, but I had no idea what they were doing there. They stood in the background, saying nothing.)

I explained my symptoms slowly and simply. The doctor, who seemed to understand what I was saying, responded in Korean, and the nurse spoke to me in English. He spoke at length while her translations were single sentences. I have no idea what I might have missed.

A couple of x-rays told him that I had a hernia in my neck, in a different place than I’d had a hernia before. He prescribed some medications—a painkiller, a muscle relaxant, and something to help my stomach handle the other two—and sent me on my way.

The nurse, who had already guided me to the cashier’s office and back so I could pay, and to the x-ray department and back, now signaled to me to follow her again. First we went to a pharmacy, where she got me my medications. I thanked her for taking so much time to guide me around the hospital. She replied, “It is good. Then I do not have to work.”

I continued to follow along obediently, thinking that the nurse would now lead me to an exit. Instead, we ended up somewhere in the basement of the hospital.

“What are we doing here?”

Physical therapy? In just one visit? It seemed pretty pointless to me, but it might be interesting!

First I am ordered to lie on a gurney. A nurse guides me to a position where my left shoulder and arm are on top of a hot pad, and she wraps the pad around me so that it also covers my arm on top. I lie with the heating pad warming my left side for about 20 minutes. It feels good, and I’m so tired that I doze off. This is physical therapy? 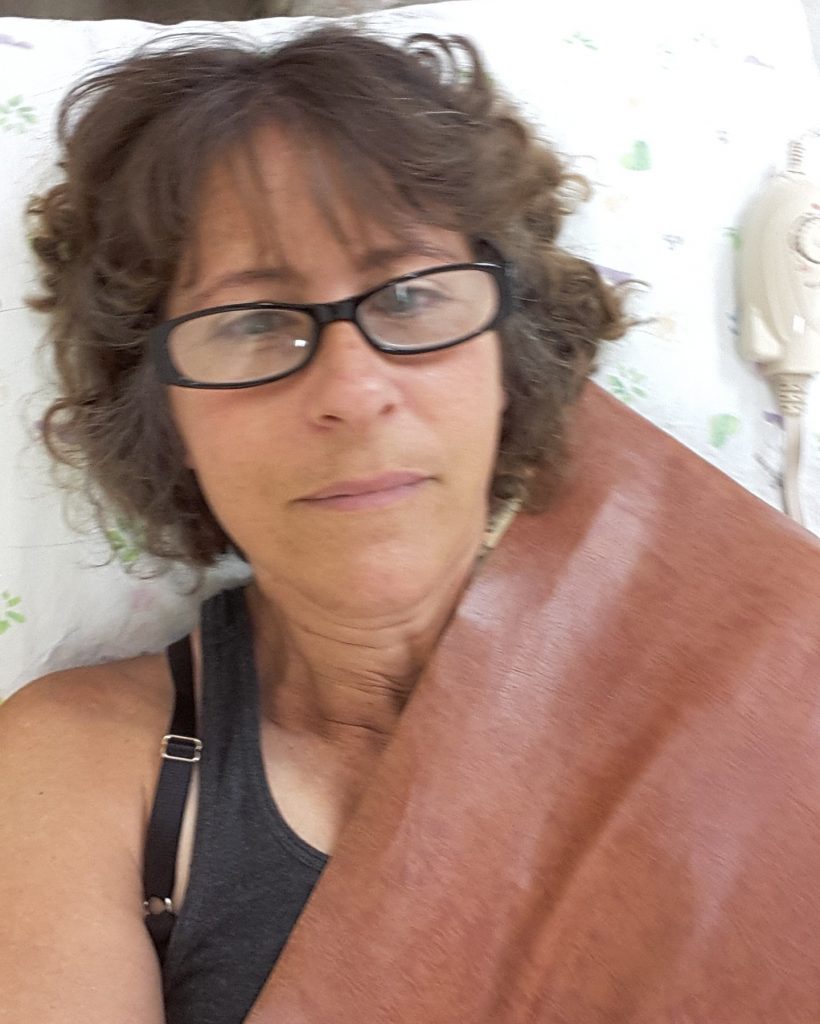 Me, wrapped in a heating pad. I apologize for the general blurriness of these pictures. It’s hard to take a good selfie with a phone, lying down, only using your non-dominant hand.

The nurse returns, waking me, and removes the hot pad. Now she rolls a machine up to the table and unfurls three wires from it. Each is tipped with a rubber cup. I think, “Cupping. She’s going to perform cupping on me.” Cupping involves attaching a cup to the skin using suction. I thought of a man I saw in China once who was covered with very neat round bruises, an obvious sign of cupping.

Should I let her do this to me? I’m not at all sure it’s a good idea, but, feeling drowsy and passive, decide in an instant to go along with it. I figure it’s all part of the experience, even though I have no belief that it’ll work. 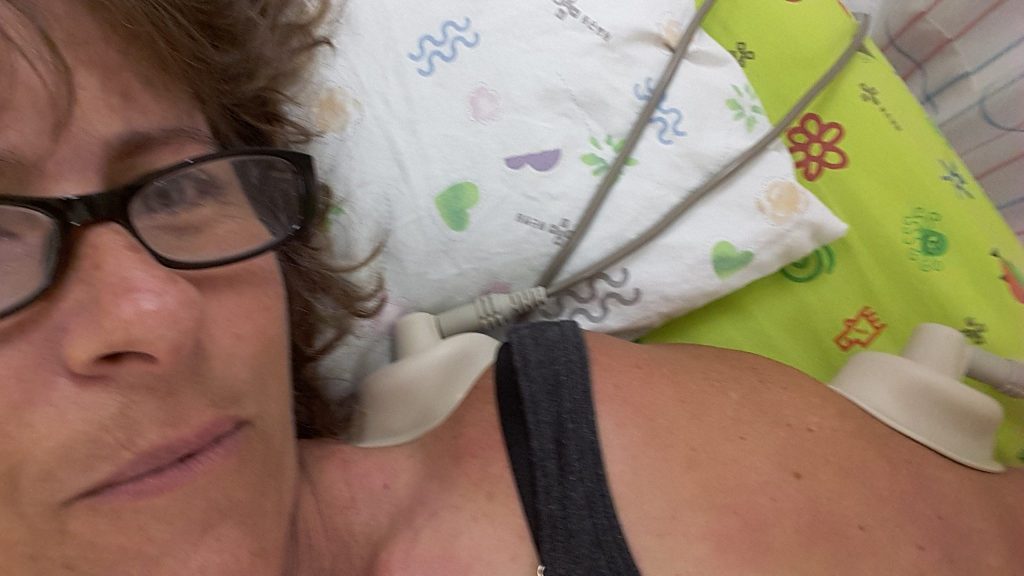 You can see the white suction cups in this selfie: one on my shoulder and one on my arm. The third one is lower down my arm.

The nurse asks, “Where is pain?”, pointing at my arm and holding up three fingers. I point out three spots on my arm and shoulder, and she attaches the rubber cups to each spot. The cups are connected by wire to the machine, and, when she turns it on, a light electrical current is sent through the wires.

After the initial shock, (pun intended), I realize that this is not cupping, and not only doesn’t this hurt, but it feels good. The three cups are synchronized, so that the impulses seem to move from place to place. Now and then the impulses change, and the net effect is that it feels like a massage. The “hands” move rhythmically, sometimes hard, sometimes gently. This feels like it could actually help!

I doze again as I relax into it, and feel a vague sense of disappointment when the machine turns itself off, waking me, about ten or fifteen minutes later.

Removing the suction cups, the nurse rolls the machine away. She quickly returns with another machine on wheels. This one has what looks like a fluorescent light on top of it, and she sets it up horizontally above my arm. Draping a cloth over it, presumably so it won’t hurt my eyes, she turns it on and again disappears.

The light therapy doesn’t make any impression on me. The light feels a little warm, but other than that, I can’t see how zapping my arm with light (perhaps UV?) is going to help my hernia or the pain. Yet again, I fall asleep.

Awakened again, a nurse (“My” nurse has disappeared by now, so little spoken communication is possible.) escorts me to a different gurney in a corner. I lie down, and she ties a strap under my chin and attaches it to a machine I can’t see. Now I’m getting nervous. This seems a little torture-chamber-ish to me. When she turns the machine on, I realize what it is: traction. The machine pulls on my chin gently for a minute, presumably stretching my neck a bit, then relaxes it again for a minute. And so on. It isn’t uncomfortable—it doesn’t pull very hard—but I can’t sleep this time. I fight the urge to giggle. 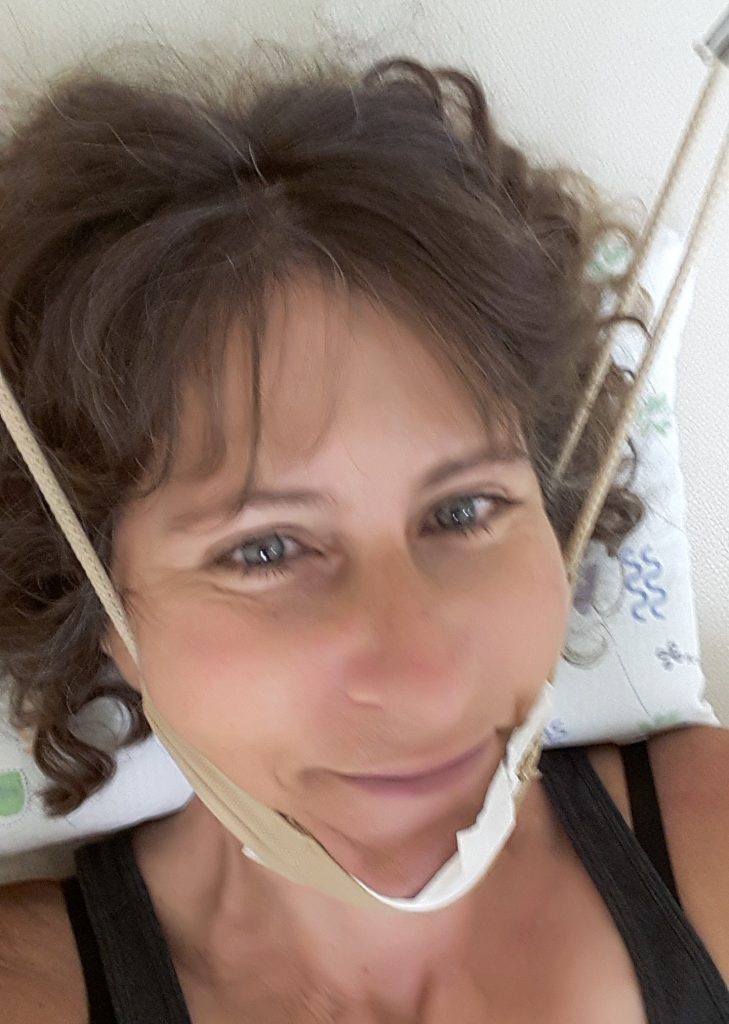 That’s it. Korean physical therapy in one visit, without any physical contact with a human being or discussion at all. No one suggests I come again to get more physical therapy. No one instructs me about exercises to do at home. Nothing.

As I leave the hospital, I am bemused by the whole experience. Is this meant to cure my complaint? Is one visit meant to be enough? The heat and the electrical massage certainly feel good, but I wonder if one shot of physical therapy administered entirely by machine could actually do the trick. Perhaps there is some other goal that I’m not aware of? Maybe some sort of Korean tradition requires physical therapy after a hospital visit?

It occurs to me, as I walk, that I’d like to do it again. For the hour or so I was there, the pain wasn’t bad at all, and seemed to go away entirely with the cupping. I even fell asleep. If I could keep that machine hooked up, I could get a whole night’s sleep. I hope that the pills will kill the pain instead.

I discover the answer soon enough: Korean-style physical therapy hasn’t cured me. On the short walk to the metro, my arm starts hurting again.