Look at the photo below. What’s wrong with this picture? 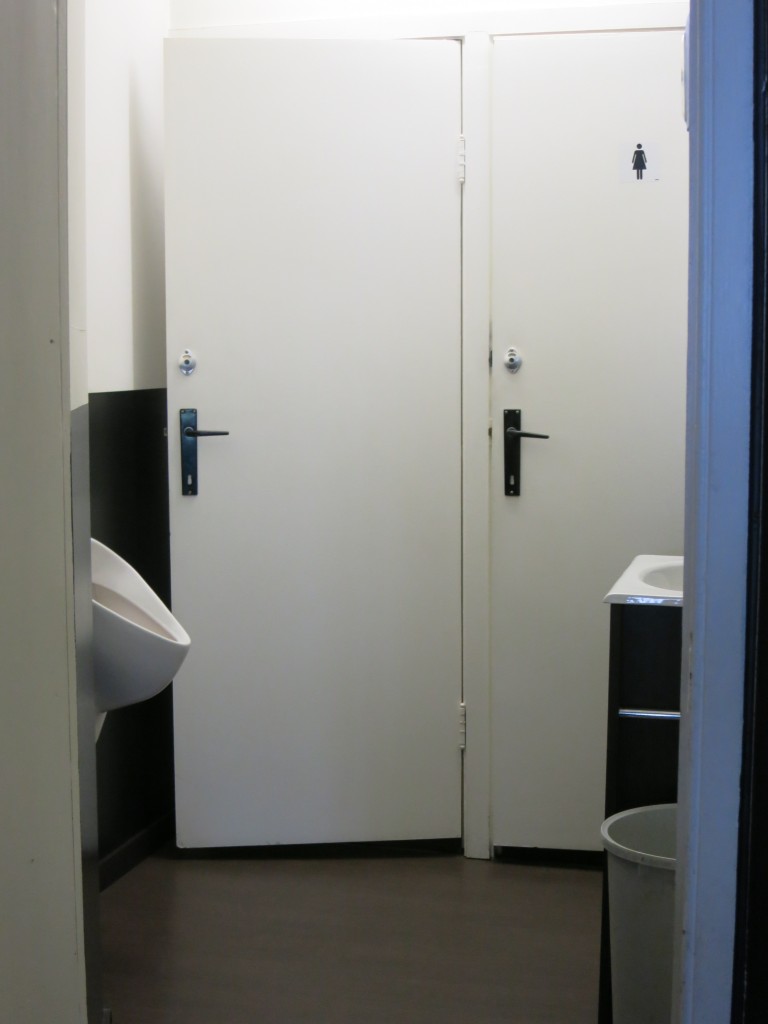 We ate lunch yesterday at a café in Gent. Afterwards, I went inside to use the toilet, followed the signs upstairs, came around a corner, and saw this.

Except it wasn’t quite this; there was a man standing at the urinal, making some very contented sounds while he peed.

I backed off around the corner to wait for him to finish.

What’s wrong #1: For a woman to get to the women’s toilet, she has to walk right by the man using the urinal. Too much information!

While I waited, another man came up the stairs looking for the toilet. I let him go ahead of me.

What’s wrong #2: For a man to get to the men’s cubicle, which I assume is that unmarked door on the left behind the urinal, he would have to go quite near the man at the urinal. I suppose it has certain homoerotic possibilities, but what if he’s not up for that? Never mind that he knows there’s a woman standing nearby waiting to use the bathroom…

So the man waited and, when it was his turn, I think he used the urinal rather than the cubicle, though I didn’t check.

So now it was my turn to enter the room. The problem would be solved if the outer door closed and locked, but it didn’t. There was no doorknob and the door was propped open.

What’s wrong #3: If a woman is inside the women’s cubicle and wants to come out again, she risks walking out to the sight of a man peeing in the urinal – again, too much information! What is she supposed to do in that case? Come out, go to the sink (and notice that there isn’t a whole lot of room between the two) and wash her hands, knowing that there’s not much distance between her back and this strange man’s back? Or should she just stay and cower in that little cubicle until he’s done?

Actually, now that I think about it, a man coming out of the men’s cubicle would have the same problem, but the distance and the angle would be even tighter. Look at how the door opens.

Amazing. What were they thinking?