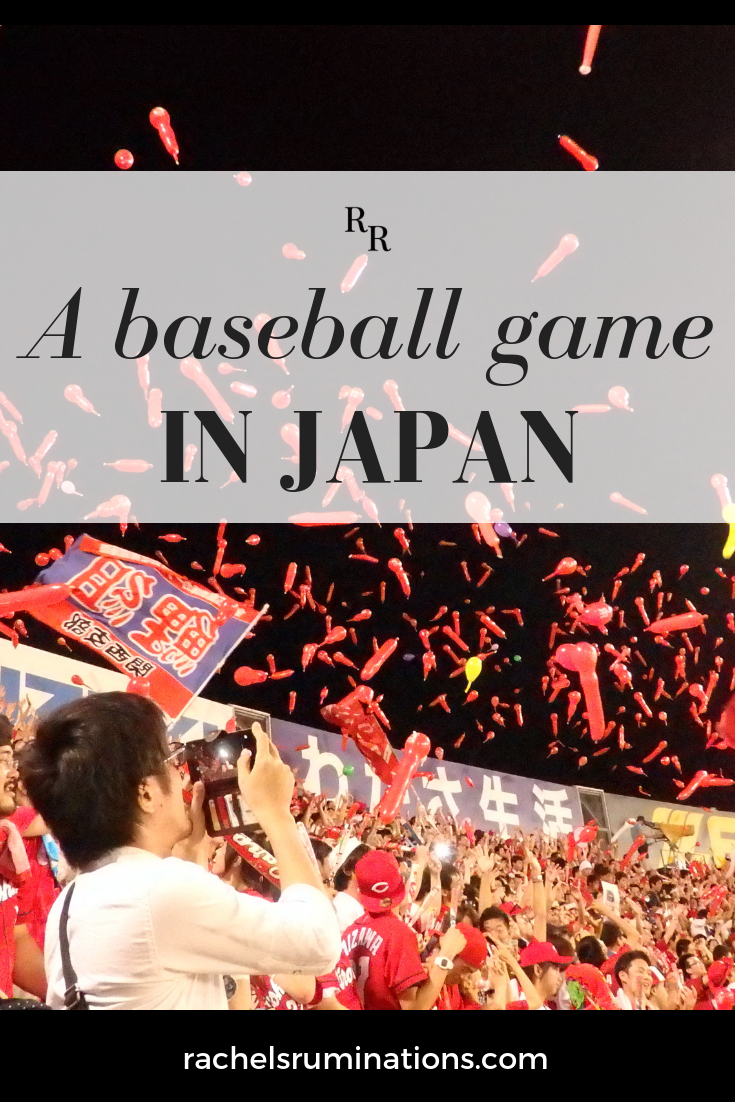 When I took a group of Dutch students to the US a few years ago, I insisted that we attend a professional baseball game, something they were distinctly unenthusiastic about. They said it was a boring game. I told them it wasn’t about the game; it was about the whole event around the game: the fans, the energy, the food, and so on. I felt it would be an excellent way to get a look at “real America.” Baseball is the quintessential American game, after all. They admitted afterwards that it had indeed been a lot of fun and “very American.”

The game I went to was between the Hanshin Tigers and the Hiroshima Toyo Carp at the Tigers’ home stadium in Osaka. Not knowing anything about either team, I chose a seat randomly, and ended up in the middle of the Hiroshima fan section in the cheap seats behind left field.

The stadium looked pretty much the same as an American one, except with fewer of the huge screens that are used to keep the spectators amused. Like at any game in the US, hawkers moved constantly through the crowd, calling out what they were selling. As far as I could tell, the choice was limited to soft drinks and beer.

The food stands behind the seats sold, not surprisingly, Japanese fast food like grilled meat on sticks or Bento boxes, but hot dogs, French fries and other “American” food was also available.

The spectators, however, were unlike an American crowd. Watching baseball in Japan is a much more active pastime than in the US. Each side, when their team was at bat, kept up a constant—and I mean constant—chant.

Not only did they keep chanting, each side had a band—drums and trumpets, mainly—among the spectators, so the chant was led by the musicians. Many of the spectators had small plastic baseball bats, which they banged together to the beat of the chanting.

It was all surprisingly polite, though. They took turns. “Our” side didn’t start up any chants when the other team was at bat, and vice-versa. It seemed to be understood that the supporters of the team at bat had that right.

It was a mid-season game, and clear to me from the first inning that the Tigers were far better than the Carp. At a game in the US, sitting among the losing team’s fans, I would have seen a certain grumpiness set in, with some fans, in their disappointment, shouting abuse at the team they’d come to support.

I asked a nearby spectator who spoke good English whether that was going on here. He told me it was, a bit, but not a lot. He said because it wasn’t such an important game, they were all keeping in a good mood. That was the impression I had as well. “We” might be losing, but we were having a good time cheering anyway.

The seventh-inning stretch at a baseball game in Japan

In the US, between the two halves of the seventh inning, the fans of both teams stand up and sing, swaying together, the song “Take Me Out to the Ball Game.” It’s called the seventh-inning stretch. One of the things I was most curious about was whether the Japanese had some version of it, and, if so, what did they do?

As the end of the sixth inning approached, I noticed that the fans of the visiting team, Hiroshima, were blowing up long balloons in their team’s color. I had noticed the balloons before for sale, but assumed they were just team merchandise, like the baseball hats and team shirts that so many of the fans were wearing.

When the sixth inning ended, it became clear what was going on. Together, the fans chanted a tune they hadn’t sung before (their version of “Take Me Out to the Ball Game” perhaps?), then released the balloons. I hadn’t noticed, but the balloons were fitted with a ring that made them whistle loudly as they deflated.

The fans of the other team took their turn next, after the first half of the seventh inning. They began inflating the balloons after the second out, and after the last out, they chanted and released their balloons.

The Tigers won the game 5 to 2, but the Hiroshima fans didn’t seem particularly disturbed by it. And it was fascinating to see how this quintessentially American sport has slightly but distinctly transformed into a quintessentially Japanese phenomenon. Play ball!

How to attend a baseball game in Japan

One way to get tickets is to show up on game day and buy one at the box office. If it’s not a championship game, your chances are pretty good of getting a seat.

To get tickets in advance, you can go through one of the teams. You can find a listing of all the teams in English on the Nippon league website. There, you’ll see that each team has a website you can click on. Don’t panic if you land on a Japanese website; you should be able to find a tab somewhere to click for English. Find their schedule, choose a game and order your tickets through their site.

I got mine through a site called JapanBallTickets that caters to English speakers wanting baseball tickets. In my case, since I didn’t really care which teams I saw playing, I just chose based on which was happening at the most convenient place and time. As in the US, the ticket prices vary greatly. (Added later: I had trouble booking it and ended up asking my Airbnb host to help me. Looking at the website now, three years later, I think it’s been improved.)

Do you like baseball? Have you been to a professional game in the US or in Japan? What did you think?

I am a co-host of the Travel Photo Thursday linkup. If you write a travel blog, please add your link by clicking on the button below. And whether you write a blog or not, make sure to check out these other great blogs!