After my visit to Pulau Ubin in Singapore, I spent most of the rest of my very short stay visiting with my foster daughter, Krislyn, and her Singapore family. But Krislyn and I needed time for a good long chat, and decided to check out Singapore’s Gardens by the Bay.

The Gardens by the Bay

Only open since 2011, Gardens by the Bay seems to be intended for a wide range of purposes: a general attraction for Singaporeans, an educational space for children to learn about nature, and an event space. It encompasses two artificial lakes with carefully landscaped paths around them, sculptures dotted here and there. 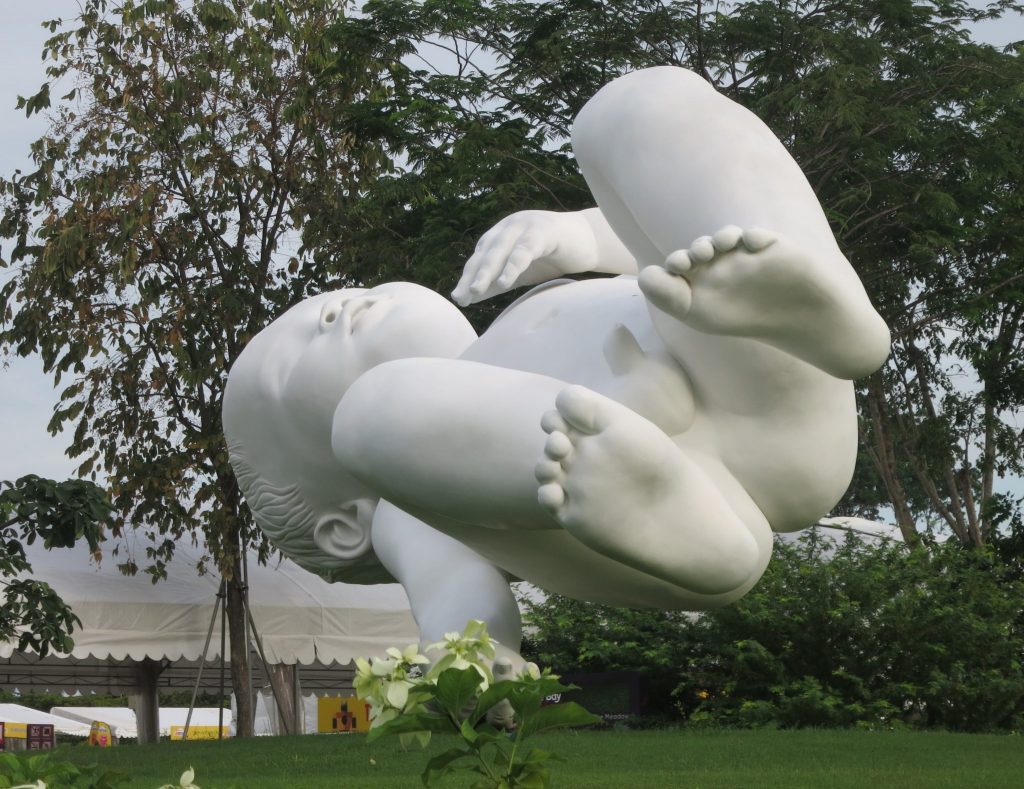 My favorite of the artworks dotting the gardens, this massive sculpture, called “Planet,” created by Marc Quinn, seems to float in midair.

The Heritage Gardens and World of Plants are both educational gardens; the first is dedicated to various aspects of how different ethnic groups in Singapore—Malay, Chinese, Indian and Colonial—have used natural resources.

The World of Plants is a more traditional educational garden, with information about how plants grow, propagate, die, decompose and so on. 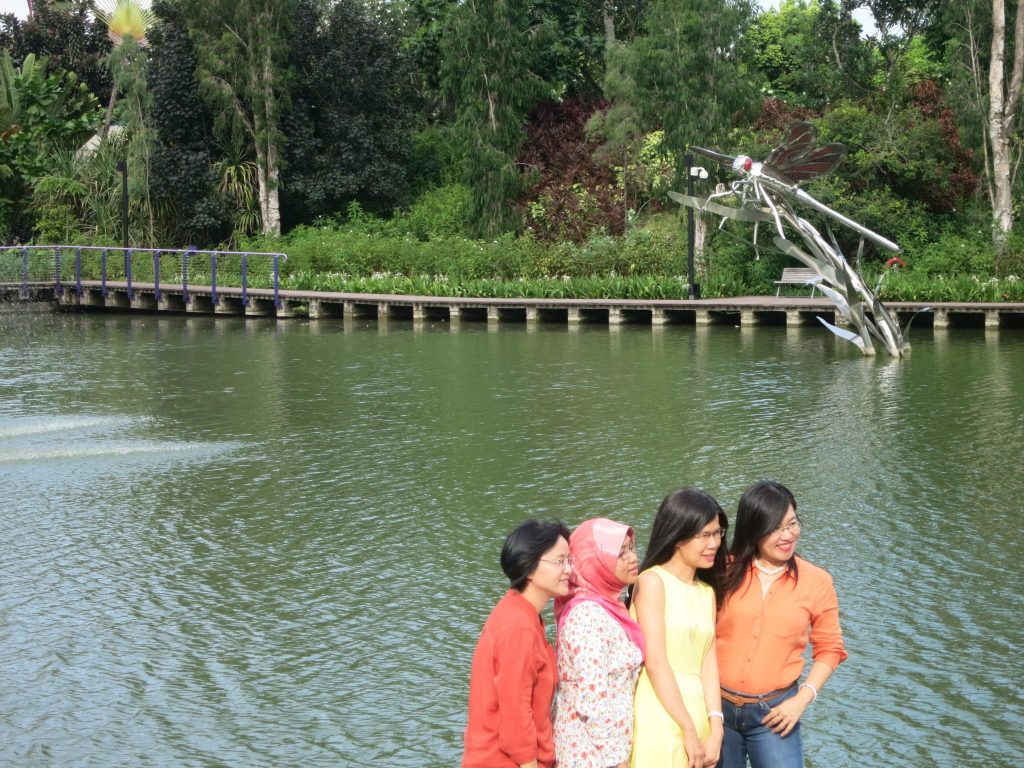 People posing next to one of the lakes, with an open-air sculpture behind them.

Krislyn and I strolled around the Gardens, stopping now and then to admire the flowers or a sculpture, and doing a bit of people-watching too. While it was all very pretty, it didn’t strike me as complete; I suspect it will be prettier when the plantings have all filled in and the trees are taller.

Gardens by the Bay has a number of attractions within and near it, most of which we didn’t see because of the rather high admission costs, so I can’t say if they’re worth it. The Cool-Moist Conservatory is a huge greenhouse housing the world’s tallest indoor waterfall and focusing on highland tropical plant life. The Cool-Dry Conservatory, also called the Flower Dome, highlights Mediterranean climates around the world.

Supertrees in Gardens by the Bay

The most immediately striking feature of the Gardens by the Bay, without a doubt, is the Supertrees. 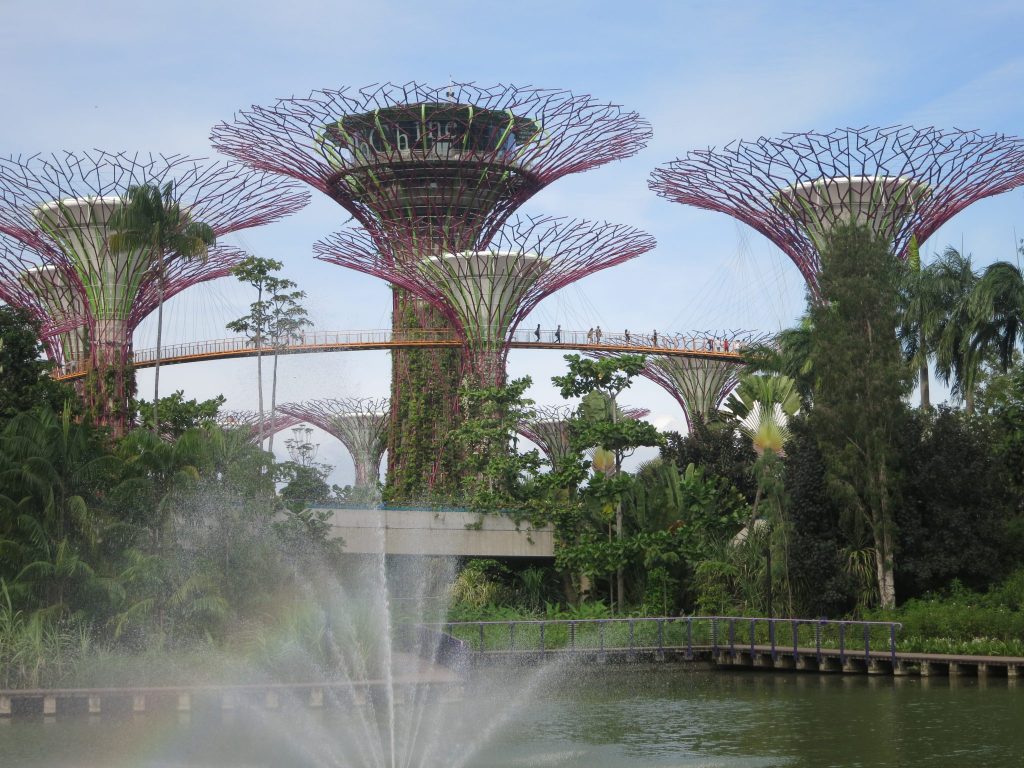 Supertrees are very odd-looking, massive artificial trees. With a concrete sub-structure, the “skin” is covered with live plants: orchids, ferns and climbers, for example. There are 16 Supertrees in all; twelve of them form a Supertree “Grove,” and the tallest is 16 stories high. One has a restaurant in the “treetop,” and two of them are connected by the OCBC Skyway, a walkway 22 meters off the ground.

The real draw, though, of the Supertrees comes when darkness falls and the “Garden Rhapsody” sound and light show takes place. Their website describes it this way:

When night falls, watch as the Supertrees come alive with a dazzling myriad of light displays bursting across the sky.

This is a bit of an exaggeration. The show involves multi-colored lights in the Supertrees, appearing to move, change color and so on, synchronized to the accompanying music, mostly Disney theme songs. It’s pretty, and it’s pleasant to sit outside in the warm darkness on the neatly mown grass and enjoy the fifteen-minute show. If it had included fireworks, the “bursting across the sky” part of the description would fit better. 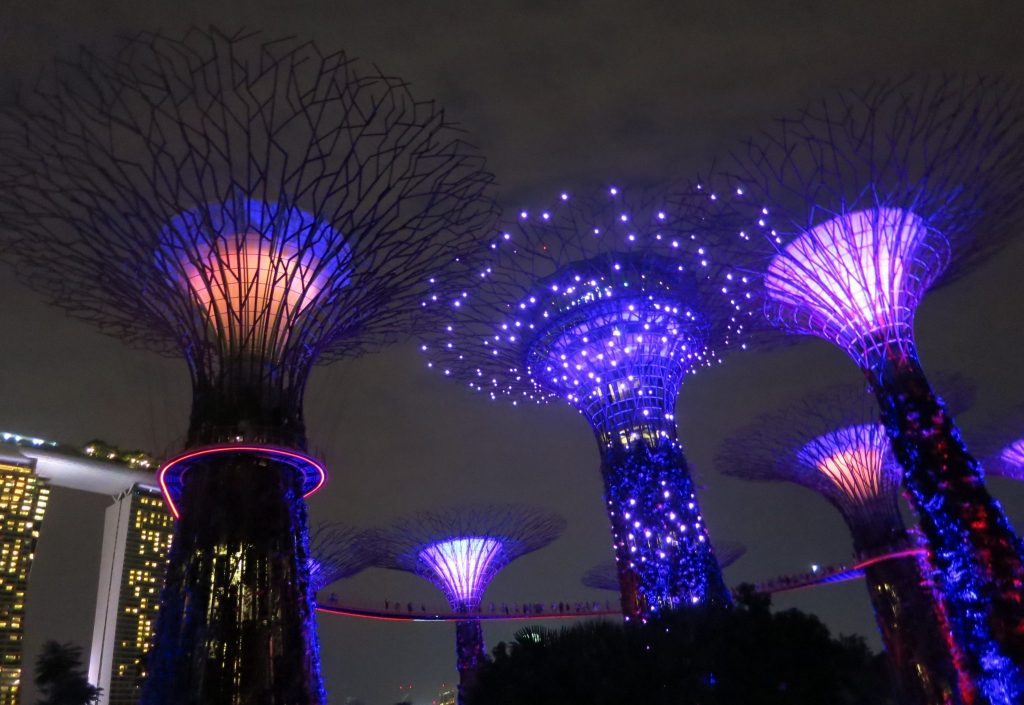 The nearby Marina Bay Sands Singapore is worth a look, if only for its over-the-top effect. The futuristic building looms over Gardens by the Bay: three vertical towers with a top extending across all three.

While we didn’t go up to see it, the top is said to be spectacular. Besides the huge view it must have from the observation deck (S$22, about €15, entrance fee), it includes a bar and two very fancy restaurants. One states that a minimum of S$80 (€53) is required per person, while the other lists main courses alone costing between S$52 (€34) and S$185 (€122). That might not sound unreasonable if you’re used to eating at top-end restaurants in New York, for example, but it seems pretty extreme to me when I ate so well in Singapore, Japan and South Korea on the same trip without spending more than €10 on a whole meal. 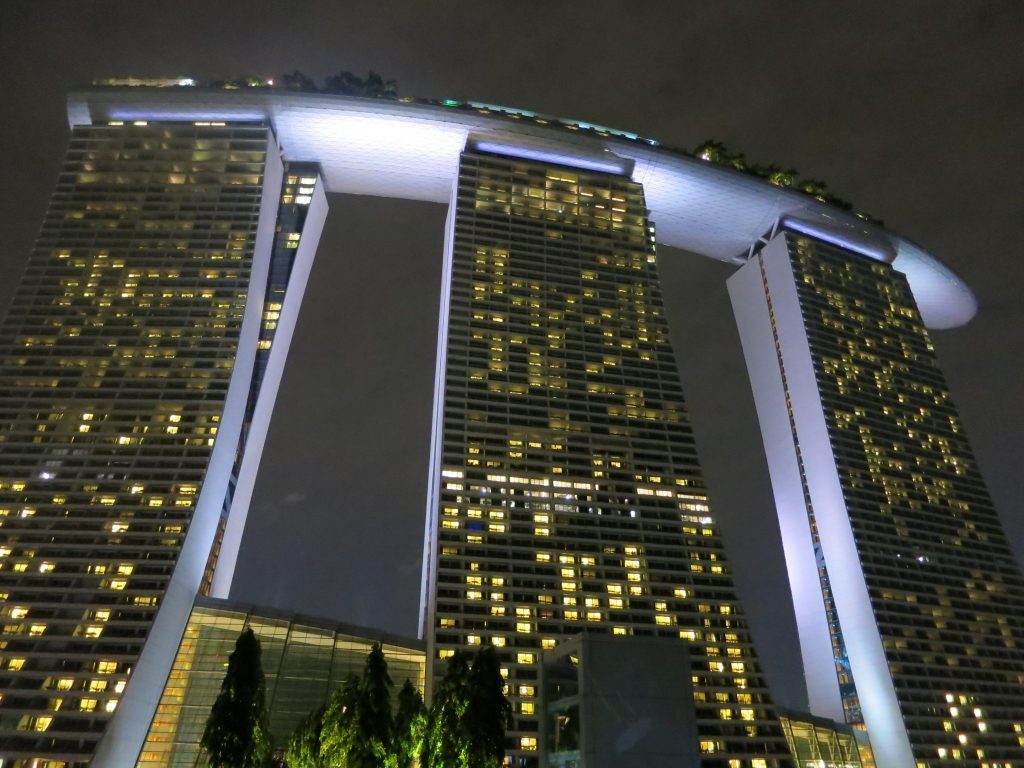 The truly over-the-top part (literally as well as figuratively) is the infinity pool, only open to guests of the hotel. It must be truly sensational with that view. When I checked on-line for the hotel prices on their website, a mid-week night in September in their “most affordable” room started at S$409 (€270) per night, not including breakfast.

Downstairs in the Marina Bay Sands Singapore is an extremely large casino, which, for some reason, offers free admission to foreigners but locals have to pay. Krislyn’s aunt had told me I absolutely had to take a look, so, with Krislyn waiting outside, I did just that.

That casino is huge! Inside the entrance, you arrive first on a balcony, which overlooks and entirely encircles the main floor of the casino. It’s an enormous room, and I couldn’t see all of it because it seemed to continue under the balcony in all directions, out of my line of sight. According to their website, they have 15,000 square meters of gaming area, with 350 table games and more than 2300 slot machines and electronic games. 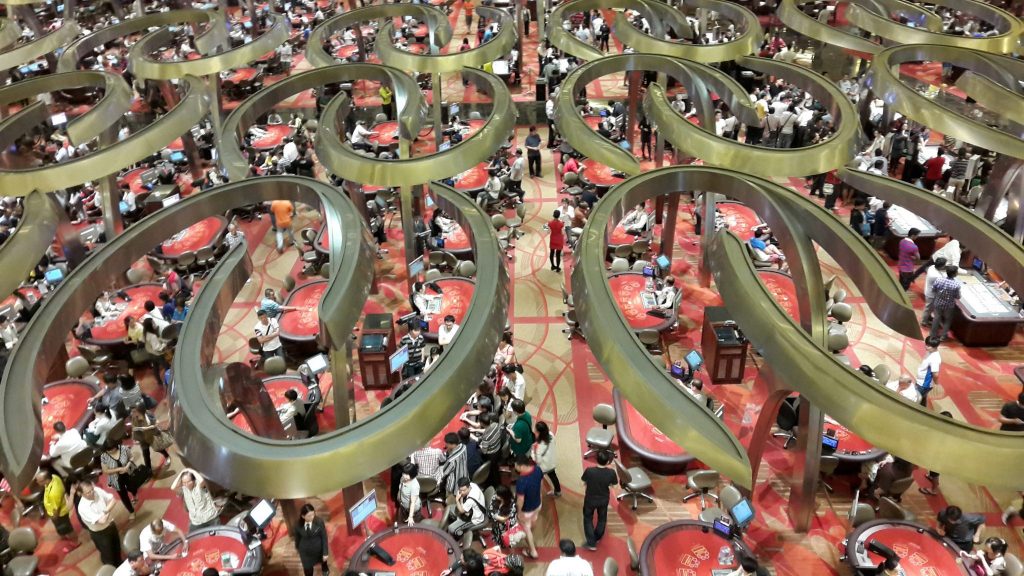 a small fraction of the main casino floor, seen from the balcony

The next day I was leaving back to Hong Kong and only had a few hours to sightsee. My very young and sweet Airbnb host offered to show me the nearby neighborhood, which was pretty and historic, she told me.

She was right. Emerald Hill is just my cup of tea and, while I’m sure it’s listed in guidebooks, my host told me that many of her friends living in Singapore didn’t even know it existed. 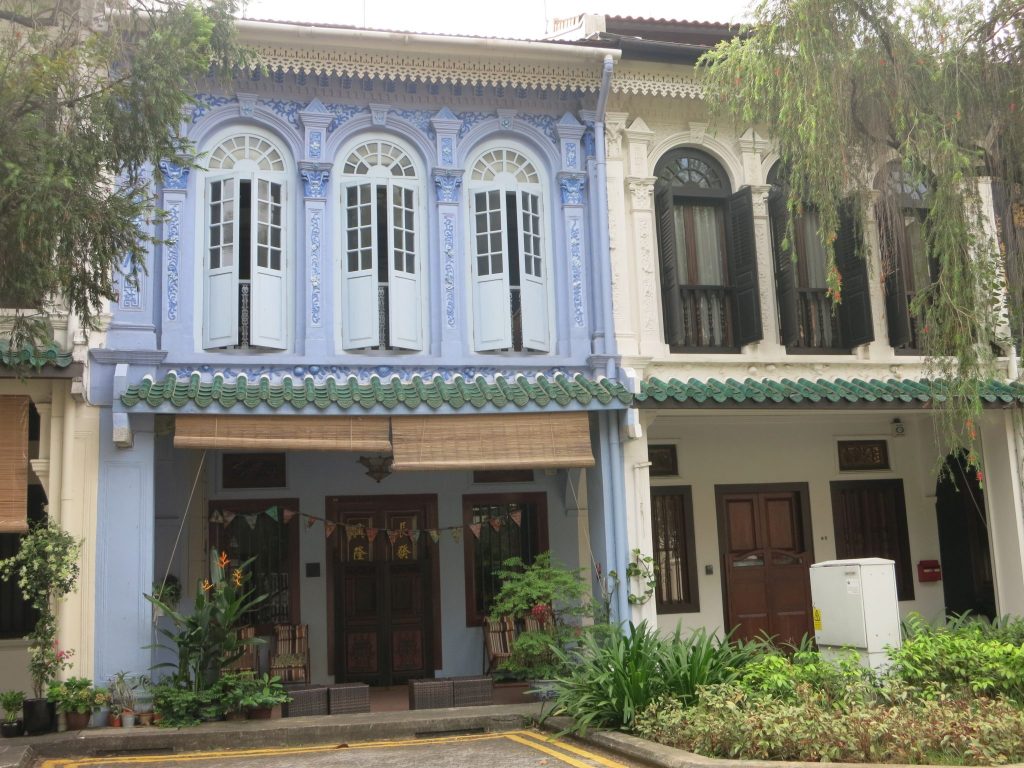 Row houses in the Emerald Hill neighborhood of Singapore

A bit of googling later and I learned that the first of the roads in Emerald Hill was laid out in 1901 and the houses built in the subsequent two decades, but, surprisingly, I didn’t find the usual overabundance of information on the internet that I expected. The first two decades of the 20th century were the middle of the British colonial period in Singapore, which lasted from 1824 until the Japanese occupation during World War II and then continued until independence (as part of Malaysia) in 1963.

But never mind the history. That day, I just enjoyed looking at the houses and photographing them. Their tidy graciousness exuded a certain elegant, tropical, colonial atmosphere. Few people were around, so I could take my time and stroll, chatting with my Airbnb host. 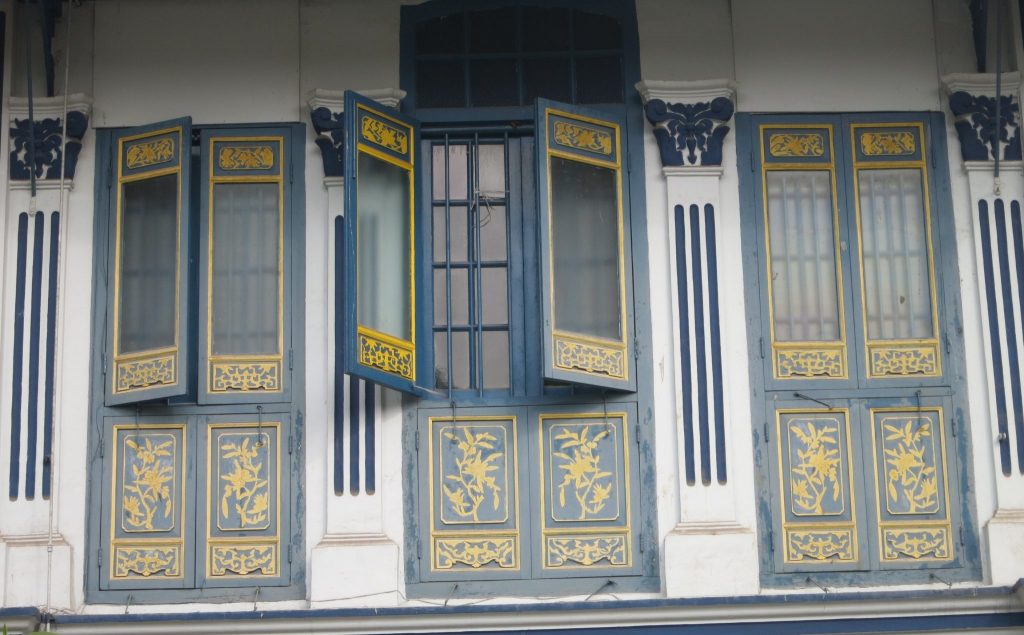 Upper-floor shutters would have allowed the breezes in, in the days before air conditioning.

When they were built, air conditioning didn’t exist, of course, so the small windows above the bigger ones would not have contained glass, allowing cross ventilation even when the main windows were shut. Many of the doors still are divided, with low shutters that could be kept closed while the door behind was left open. Some of the houses still have decorative shutters on the upper floors, which again would be left open to catch the breezes at night. 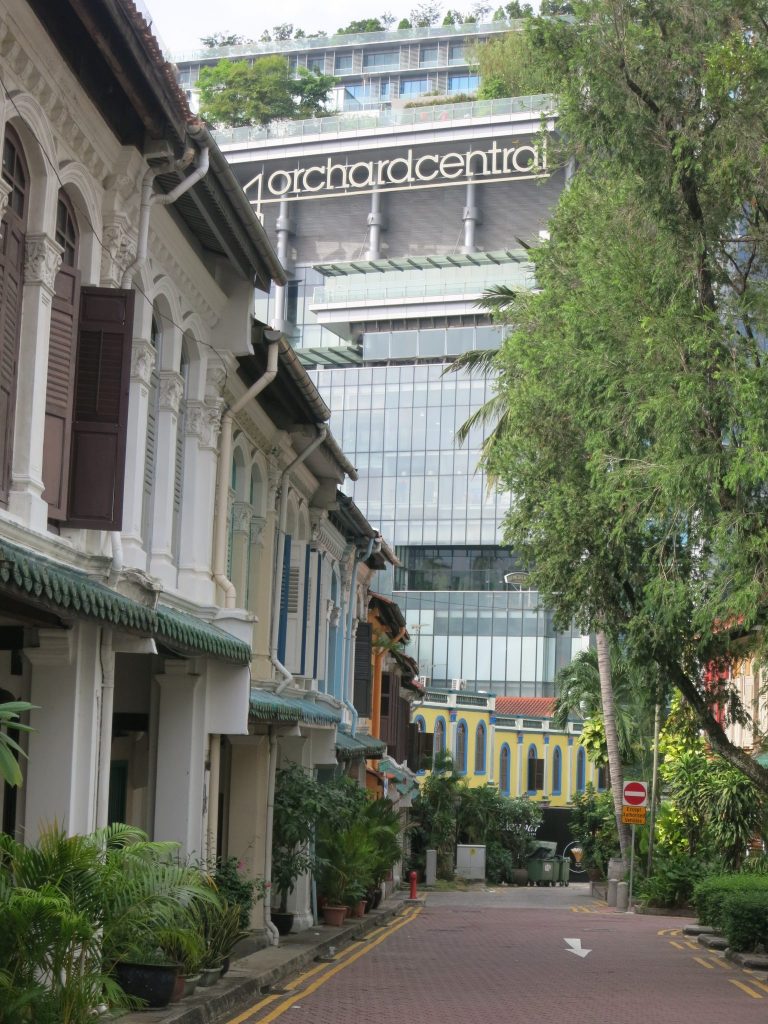 looking down one of the rows toward Orchard Street

Some must have been used as shops on the ground floors, and a few still are: the ones closest to Orchard Street. Unfortunately, those houses have been painted in brighter colors that are out of keeping with the quiet grace of the rest of the rows.

Housing costs are high in Singapore, and I imagine these homes go for millions. Nevertheless, it costs nothing to go see them and breathe in that quiet atmosphere of times past. 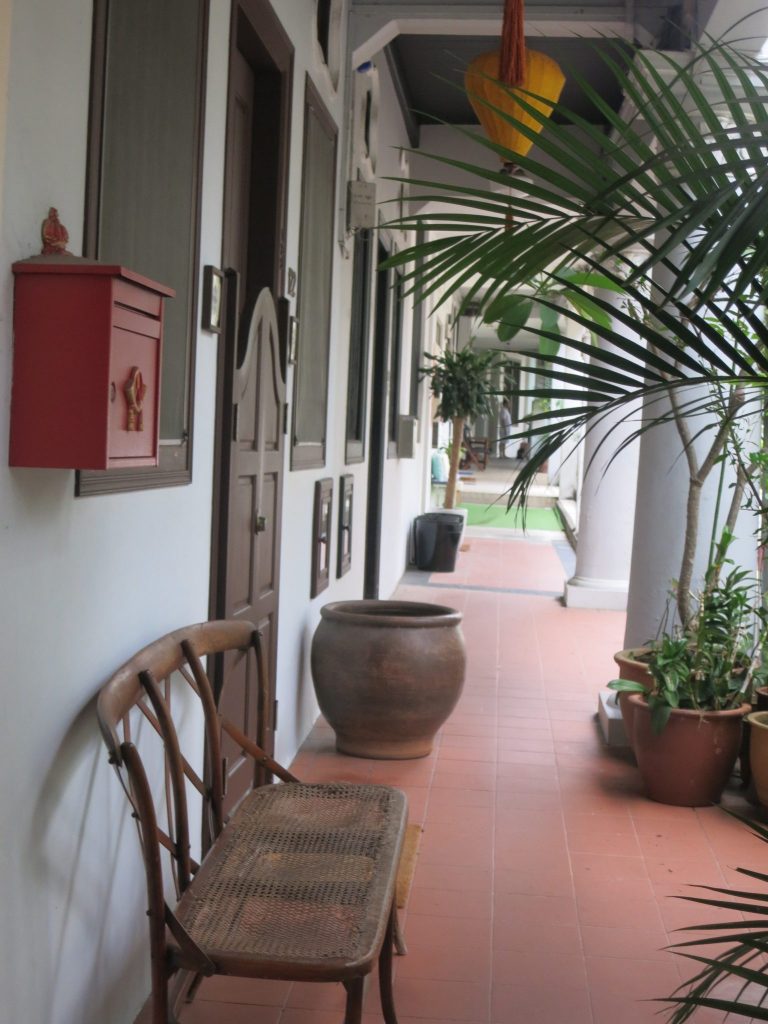 Nothing could have offered me so much of a contrast to the pulsing, loud, modern vibe of the night before’s Garden Rhapsody, the crowds at the Gardens by the Sea, and the frenetic activity of the casino. Much more to my taste, exploring Emerald Hill was a good way for me to say “Good-bye for now!” to Singapore.

Have you been to Singapore? What did you most enjoy seeing or doing there? Add a comment below! 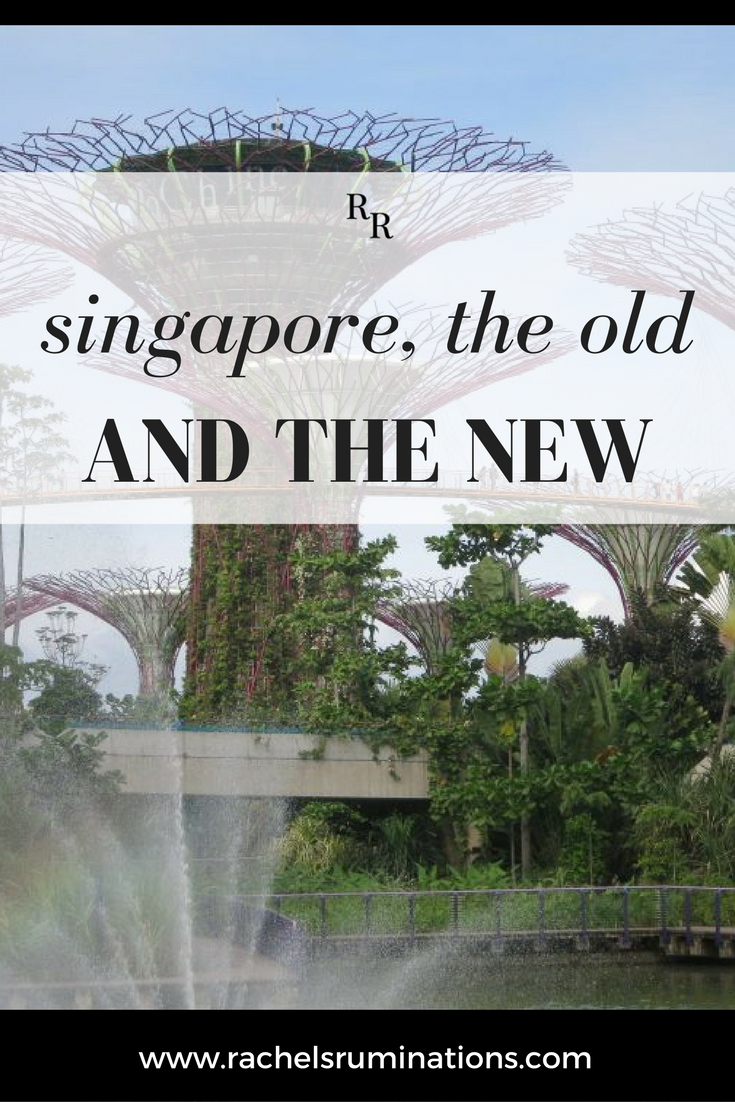 This post is part of the Travel Photo Monday linkup!