My less-than-a-week in Hong Kong was a stimulating, perhaps over-stimulating, series of strong impressions. Here are some of the strongest ones:

I booked an Airbnb room for my trip to Hong Kong, so I stayed in a residential neighborhood of Kowloon: the section of the city across the bay from central Hong Kong. When I say “residential neighborhood,” however, what I mean is nothing but huge apartment houses with shops on the ground floor. That seems to be what all but the absolutely super-rich Hong Kongers live in.

What amazed me, however, is how crowded those residential neighborhoods must be. My Airbnb host’s apartment is on the 31st floor of one of these tall towers; the view was pretty special. 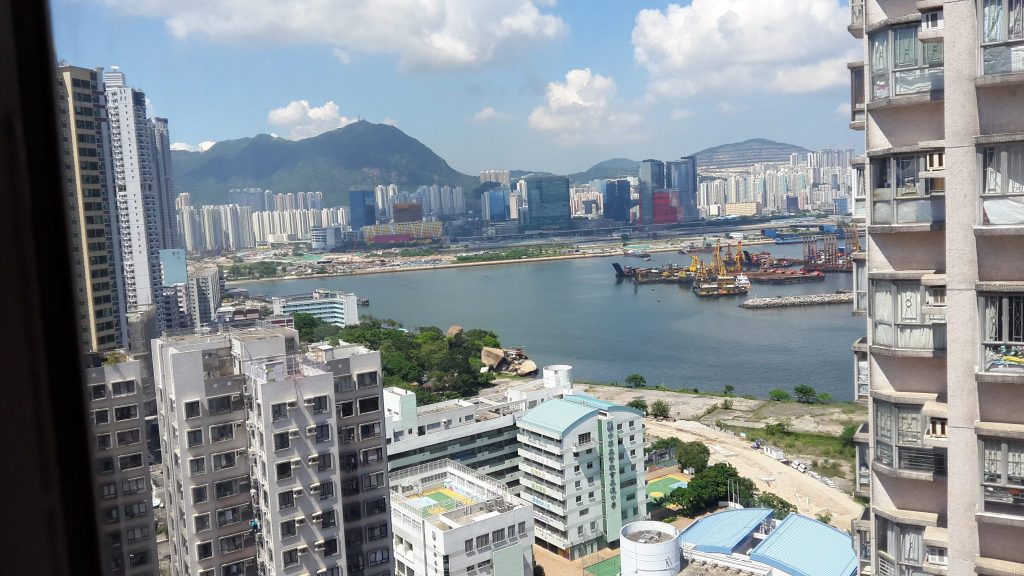 the view from the apartment

It’s a two-bedroom, but these are without a doubt the smallest bedrooms I have ever seen. The living room is barely bigger, and the kitchen is a closet, with just enough floor space to take one step in and one step out again. I’d guess that the total floor space of this two-bedroom apartment was about 25-30 square meters. 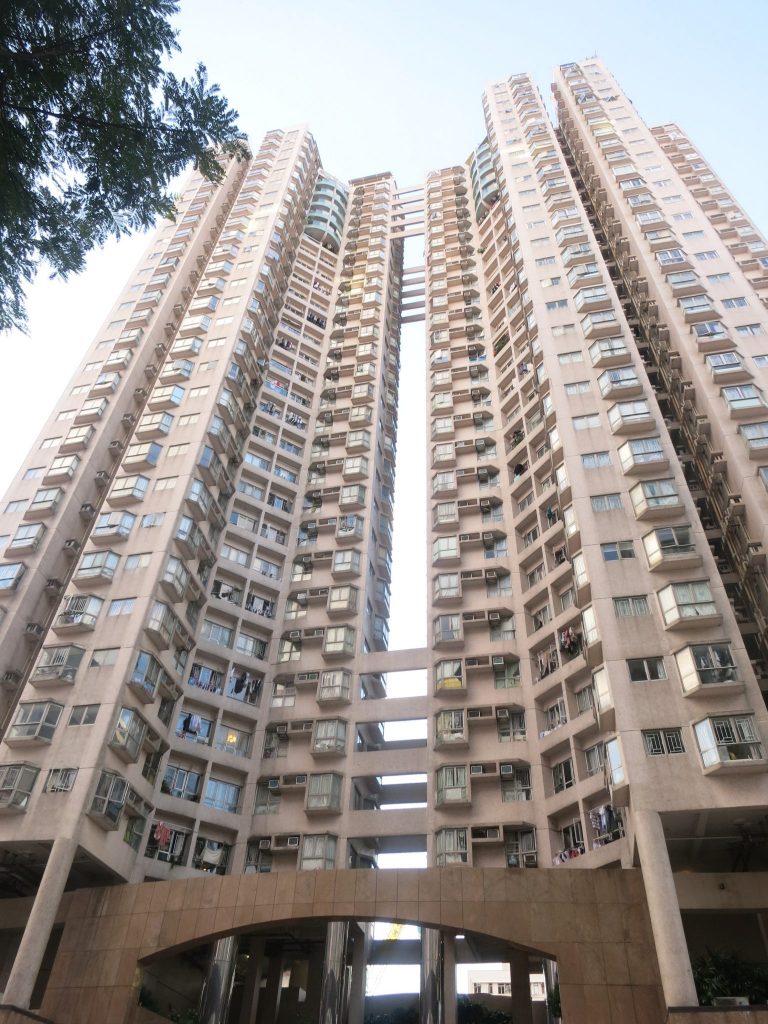 Where I stayed in Kowloon

The room I slept in was more or less square, but not evenly so. A simple single bed could not fit. Instead, it looked like she had cut a corner out of the mattress to get it to fit the only possible space. The only other furniture was a small bookshelf. My backpack could fit on the rather wide window sill.

I did some arithmetic by counting the mailboxes on the ground floor of her tower block: 216 mailboxes in her tower, and let’s assume that the second tower has the same number of apartments. That means a total of 432 apartments. Let’s assume 25-square-meter apartments with two people in each, which assumes they’re not overcrowded at all. That comes out to 12½ square meters per person.

Small, but livable for one adult and one child. However, she told me that they were much less crowded than many in the building, or many in the whole city, for that matter. She described people she knew who were a couple and had three children in the same space. This is, according to her, not unusual: housing is incredibly overcrowded and too expensive to move to bigger quarters.

So if we assume an average of four people per apartment, that makes only 6¼ square meters per person! In that case, a total of 1728 people live in her building alone. This is beginning to sound like an animal rights lobbyist discussing chicken farming!

My host also told me that some apartments in Hong Kong have no kitchens, which explains why there is so much extremely cheap street food available all over the city.

I got breakfast every day from this very cheap and very good dim sum place down the block.

On the outside, many of the buildings appear terribly dilapidated. They are made of concrete, I think, and are haphazardly studded with air-conditioning units, pipes and wires of various sorts. 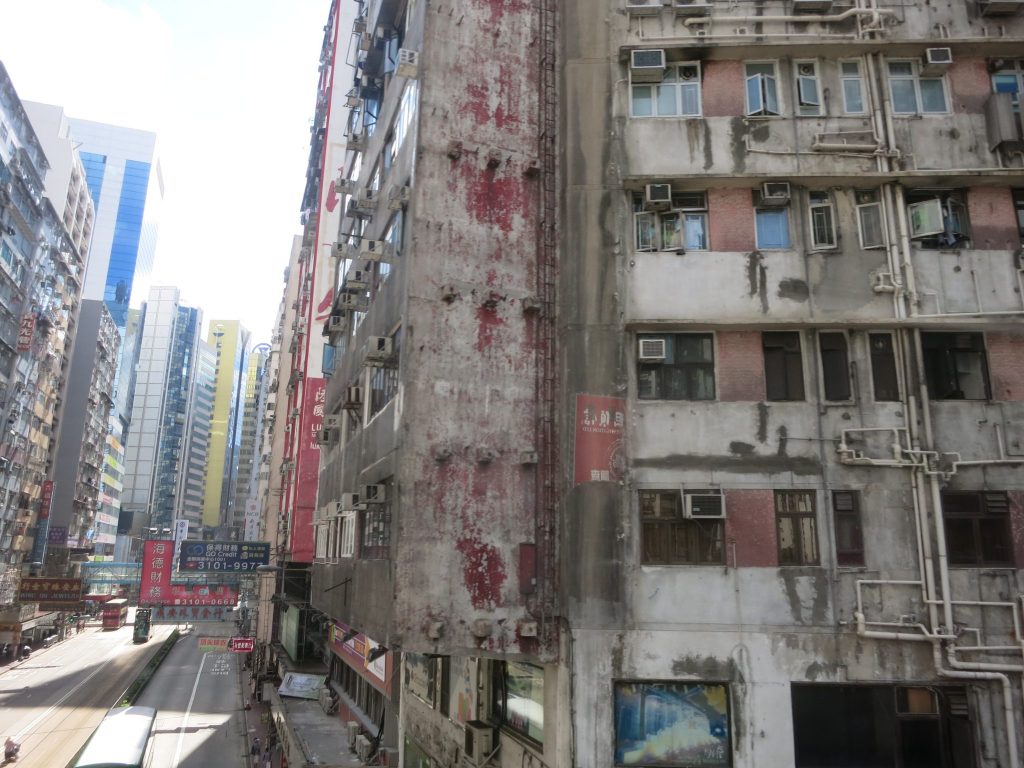 I took this picture randomly through a bus window, but it gives an idea of what many buildings look like.

That doesn’t mean they’re so bad inside, but if they’re that crowded, they can’t be good. I noticed that many of them had balconies that had been converted to rooms: not surprising if space is at such a premium.

Many balconies have been closed in and made into rooms.

When I looked up the numbers on line, the World Bank’s statistics made this all a lot clearer: Hong Kong’s population density is 6845 people per square kilometer! The Netherlands, which is considered very crowded, has 498 per square kilometer, and the US has only 35. That explains why people live in such small apartments: with such a densely-packed population, space is at a premium, so it costs a lot. Even if you were making a decent living, you’d have to live small. Only the wealthiest could afford the kind of space we’re used to in a situation like that.

At the same time, I could see at a glance that wage rates must be low. At rush hour, in the metro system, young women stand with signs between every two doors of the train telling people when to wait and when to board. I saw a young man at a bus station whose sole job seems to be to wave people onto buses. Given that they clearly know what bus they want to take, it seems pretty useless.

Stores appear to be consistently overstaffed, so service is good, but it wouldn’t happen without low-wage labor. Street cleaners are everywhere.

If wages tend to be so low and rents tend to be so high, whole families filling small apartments makes sense, all contributing to paying the rent. It can’t be pleasant, though. 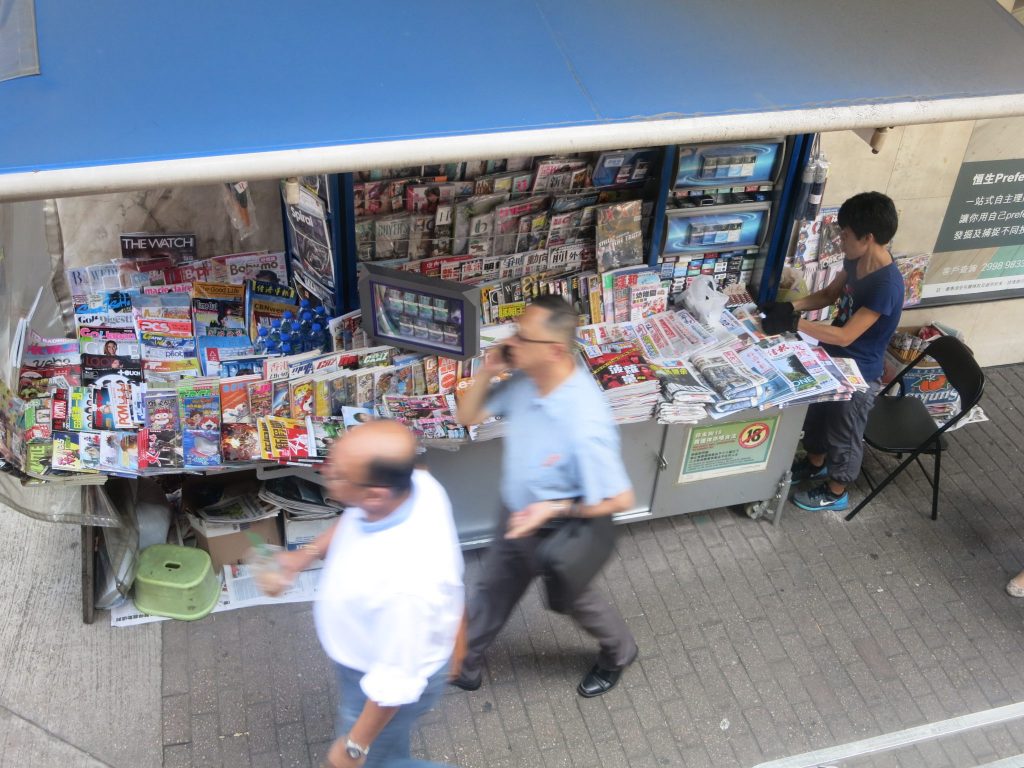 a newsstand in Hong Kong

The shops on the street, in general, are very basic and offer very cheap items. The contrast is extreme between them and the spotless, marble-detailed, air-conditioned luxury label stores in the central business district. These upscale malls create an atmosphere of calm, comfort and luxury. Gentle, serene music forms the background. Sweeping, clean, white, wide-open spaces, with lots of glass and light, add to the ambiance of style but also comfort, aided by the fact that the air-conditioning is set exactly right: not too cool, not too warm. No wonder shoppers want to stay there as long as they can and buy into the lifestyle those upscale goods represent. People who wear Pierre Cardin or Yves St. Laurent or Tiffany or Gucci have plenty of living space. 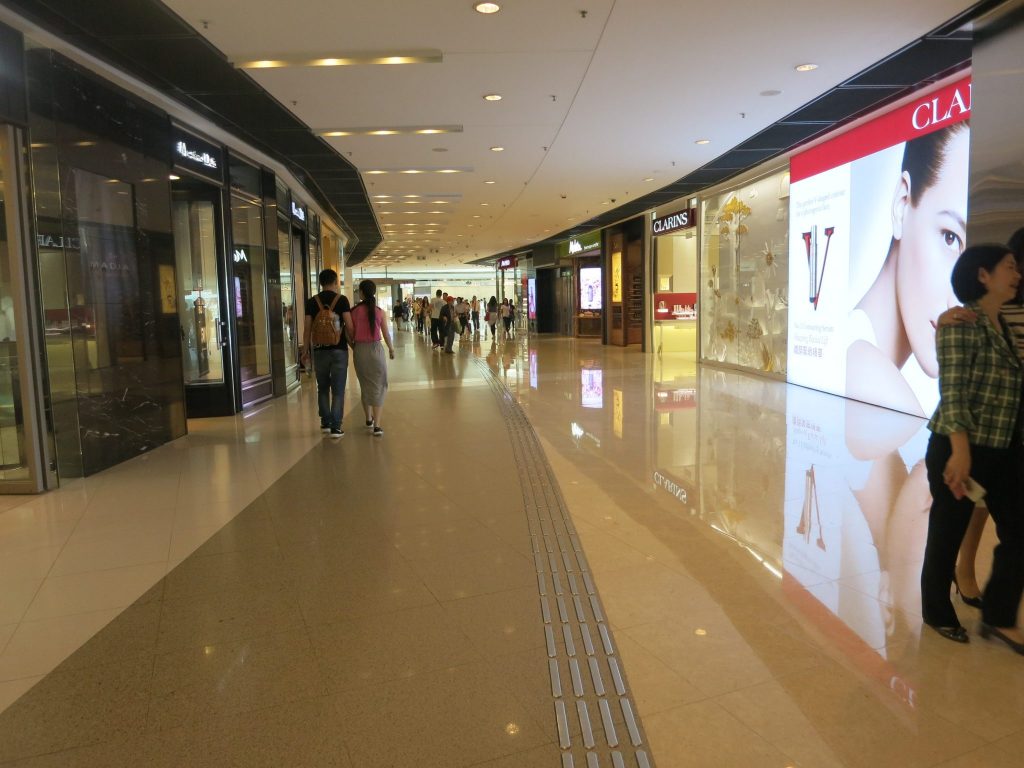 one of many upscale shopping centers

I’m not shy about asking for help if I need it: directions mostly. When I asked older people in Hong Kong, they generally looked like deer in the headlights and couldn’t respond at all. Younger people, however, sometimes jumped in and saved them by helping me themselves, often with remarkably good English.

What happened many times in Hong Kong when I stopped on the street to peruse my tourist map was that younger people stopped and asked me if I needed help with anything. I didn’t even have to ask. The Dutch could learn from this!

Another very polite thing they do is queue at bus stops, and much more consistently and politely than in the UK. The mini-buses are not allowed to take standees, so often only a few people can board the bus. Yet no one pushes to board first. The ones at the front of the line board the bus, and the others wait. I didn’t even see any looks of impatience. Impressive. 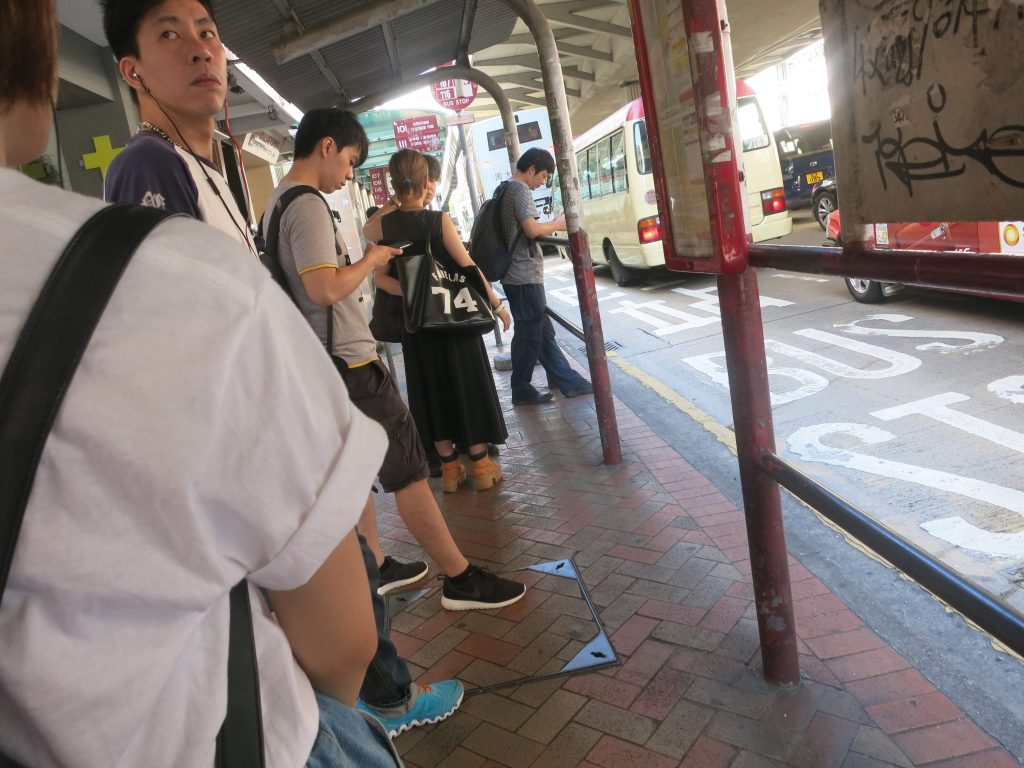 People standing in line for the bus in Hong Kong

While I was there, the top political story in the news concerned a vote in the Legislative Chamber (Legco). Since Britain handed Hong Kong over to the Chinese, Beijing has always chosen their chief executive (or rather a committee chosen by Beijing chose the chief executive). Now a change in the law, sponsored by Beijing, proposed to allow direct elections of the chief executive. Sounds good, right? Direct democracy. Except that under this change, only candidates who were preapproved by Beijing would be allowed to run.

In the weeks preceding the vote, opponents staged protests à la Occupy and took up residence on the sidewalks around the Legco building. At the vote itself, most of the pro-Beijing legislators walked out, intending to stall the vote. However, some of the pro-Beijing legislators hadn’t been informed of the walkout and went ahead and voted, which meant there were enough votes for a quorum and the “reform” didn’t pass.

The newspapers were full of the scandal, with recriminations all around: Beijing accused Hong Kong of rejecting democracy. Pro-democracy campaigners refused to accept “fake universal suffrage.” The legislators who had not walked out had to explain their actions, and are presumably in a lot of trouble behind the scenes. And in the meantime no one seems to know what this means for Hong Kong’s future.

For me, it was interesting to see people’s interest in politics. While it seemed evident to me that China’s foothold in Hong Kong is very strong, the people there seem to be resisting it as best they can.

While I don’t know much about the various branches of Buddhism, one thing was very clear to me: religion is a real and important part of people’s lives in Hong Kong. 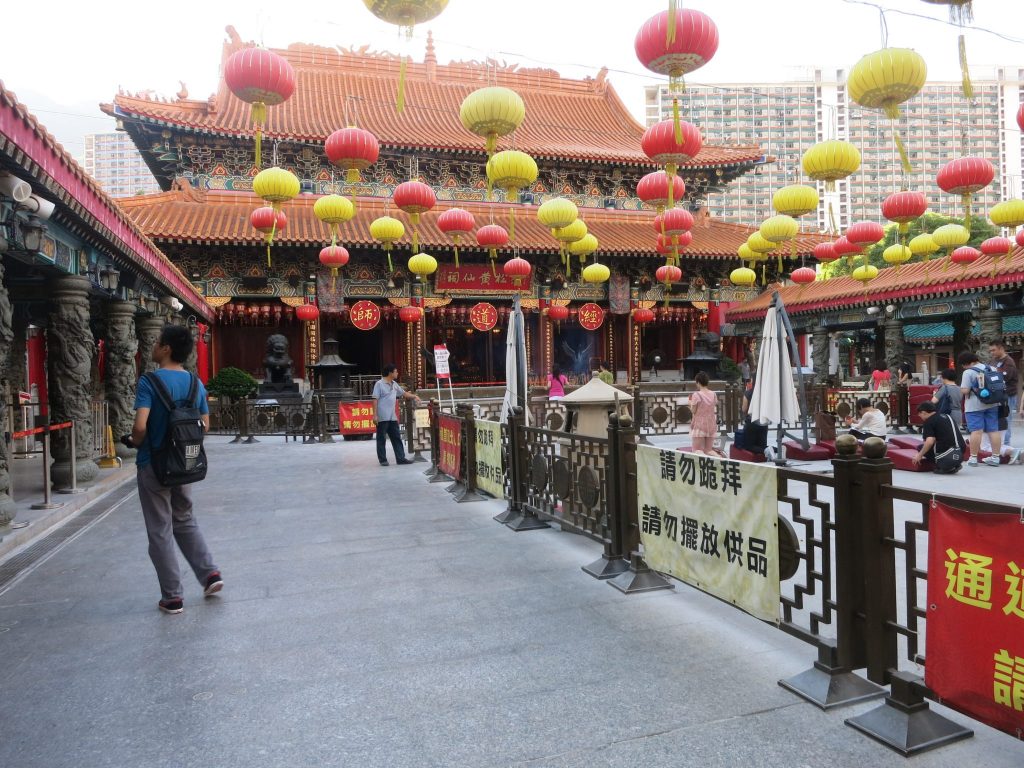 I visited quite a few temples while I was there and, at every one of them, people were actively praying. It seems to be something people do as a matter of course, in passing. They’d be carrying shopping bags, or a briefcase, and would stop, pay for a stick of incense, light it, and go through the very brief ritual of bowing, praying, and clapping hands. Judging by the amount of incense at the old Man Mo Temple and all the other shrines I visited, and the number of varied offerings piled on and around each altar, religion is not at all a thing of the past.

You can get any sort of food in Hong Kong: Eastern or Western. My favorite, without a doubt, is dim sum, which people eat for breakfast or lunch. Dim sum is a general term for a whole range of items: dumplings with various fillings, steamed buns with various fillings, and lots of other formats. They’re very cheap and very fresh in Hong Kong, another indication of how low the wages must be, because producing them is quite labor-intensive. 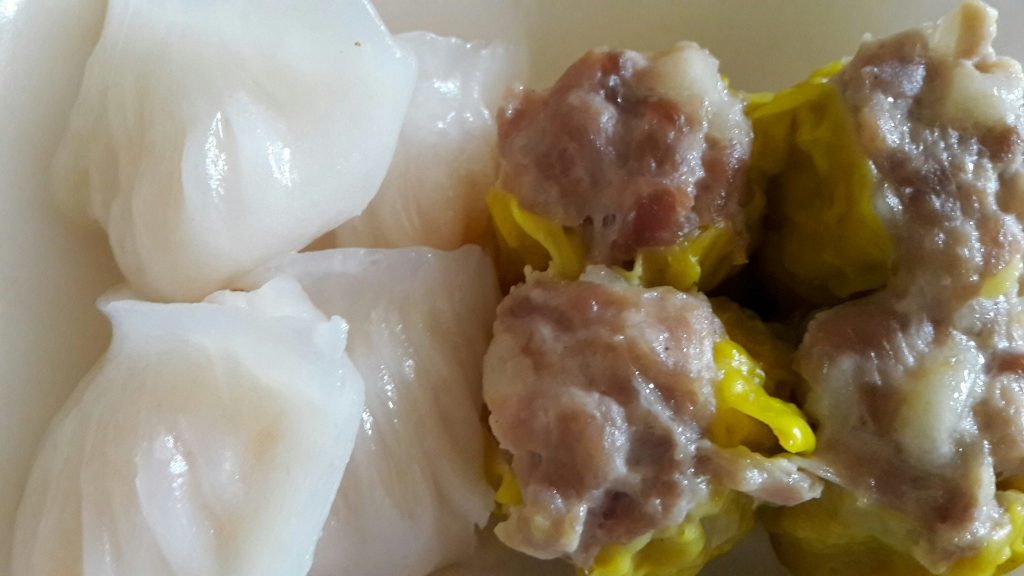 Two of the many varieties of dim sum. The white ones on the left are filled with shrimp; the others are pork.

If you read my posts about Lamma Island or Hong Kong Park or Victoria Peak, you’ll know that in Hong Kong I was able to enjoy nature as well, despite how densely populated the city is. Its image is all booming metropolis, but that image belies the fact that much of it is covered with gorgeous forest and edged with a beautiful coastline. I only scratched the surface of what it had to offer. 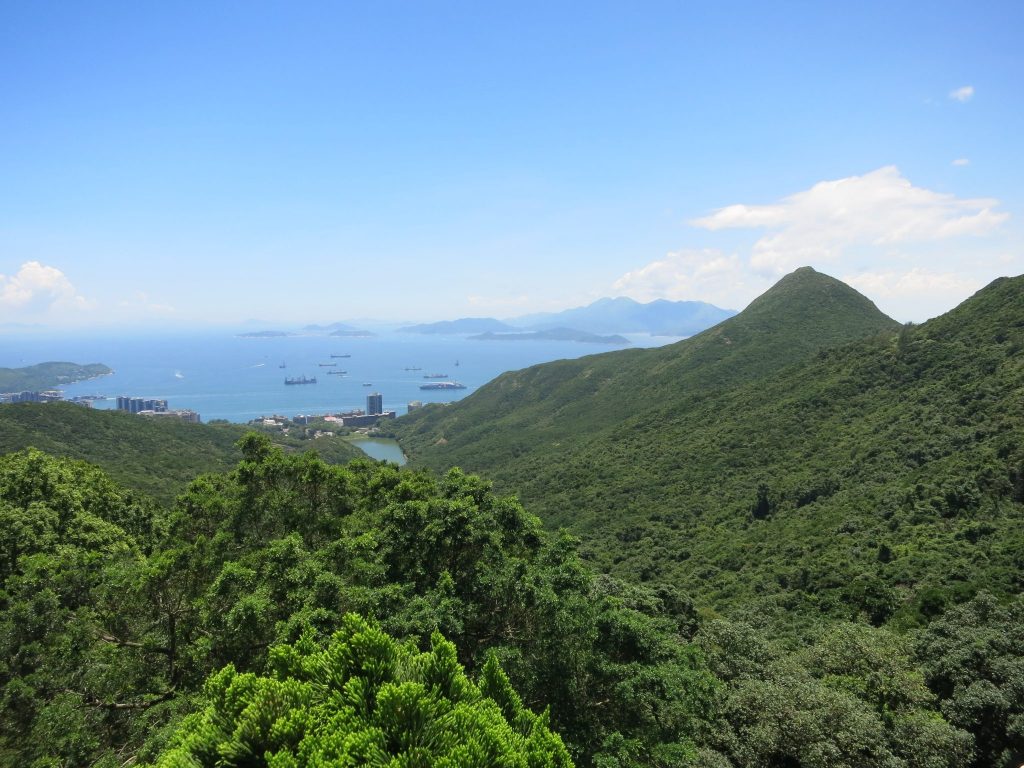 Lots of forest to be explored! This was taken on Victoria Peak.

I can’t list here every observation about Hong Kong, of course; it’s an incredibly stimulating place to be. These are just the characteristics that struck me while visiting for less than a week.

If you’ve been to Hong Kong, what were your strongest impressions? Please add them in a comment below!