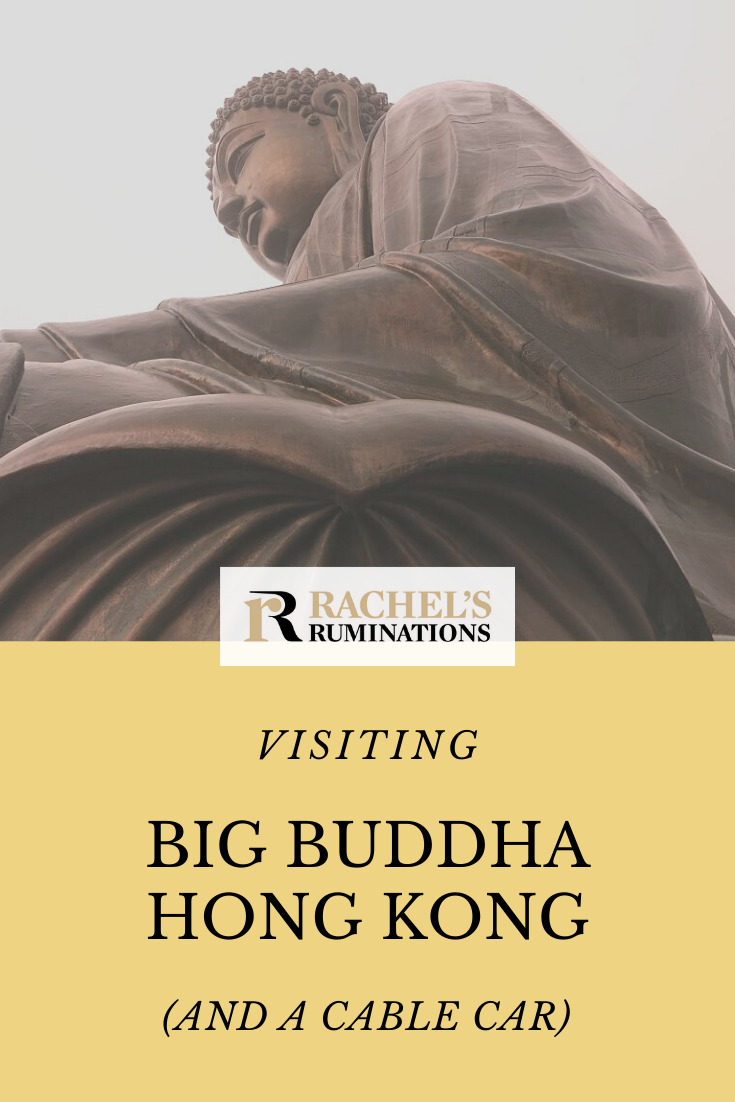 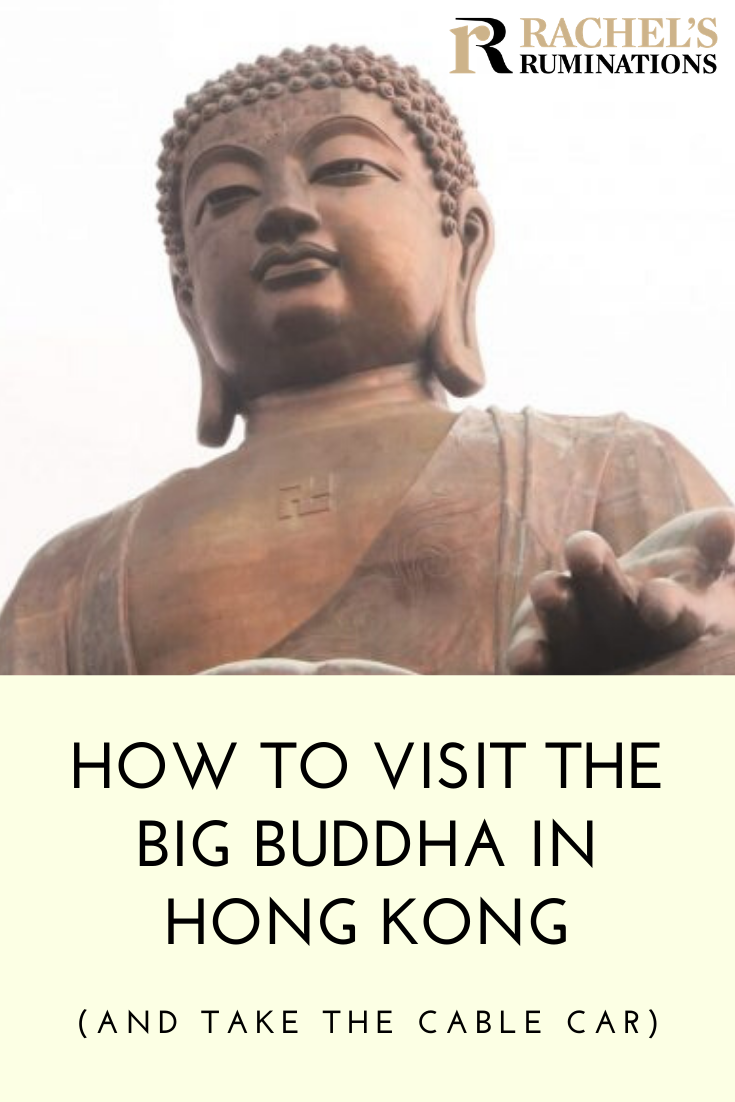 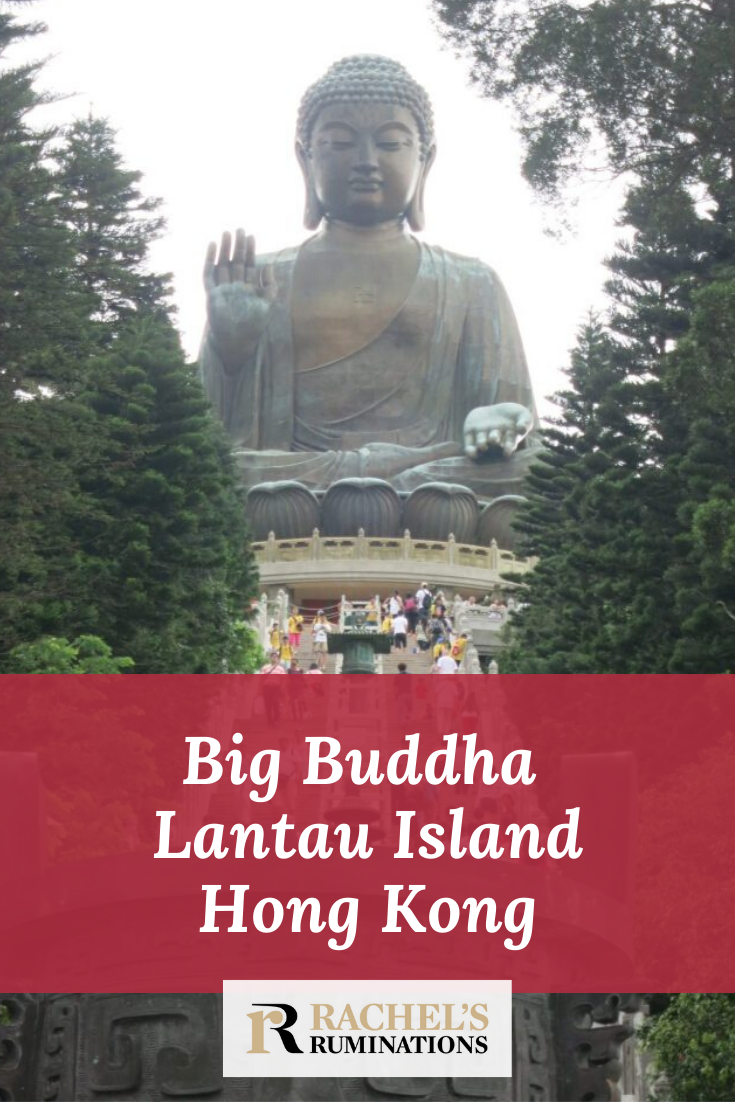 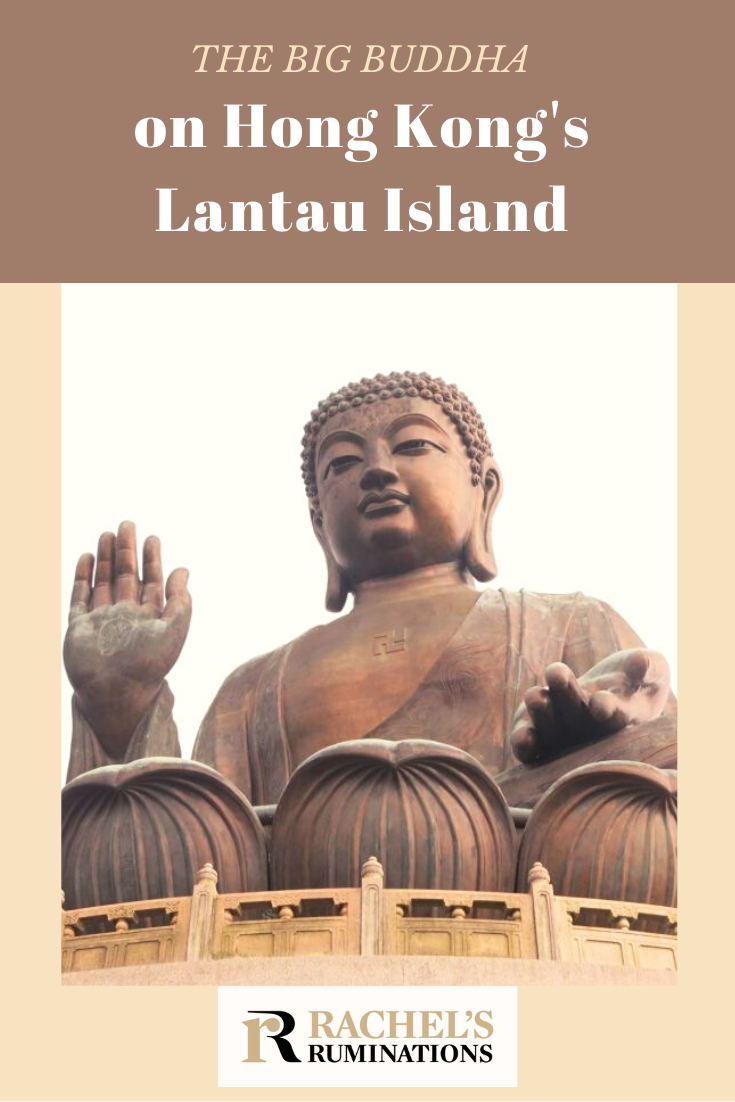 Stepping off the bus onto a concrete plaza on Lantau Island, I followed the signs reading “Big Buddha.” A distance of about a city block down a paved walkway, very wide, and edged with neatly-kept landscaping, was another plaza: a big circle. Signs pointed the way toward the Po Lin Monastery, the cable car, and, to the right, toward the Big Buddha.

My husband visited the Big Buddha a few years ago and told me that I really should go, saying it was “impressive.” I didn’t really expect much, just a big Buddha statue. The real draw was the cable car ride, in my mind.

Turning that corner and looking up toward the Buddha, however, I realized what he meant. A long and very steep staircase (268 steps, according to Wikipedia) rose in front of me, topped by what must indeed be a very BIG Buddha.

The Big Buddha, whose real name is Tian Tan Buddha, is not old, despite its traditional appearance; it was completed in 1993. While many people who visit it are, like me, tourists, many are locals who go there to worship: the Big Buddha is revered and the climb up that long stairway is an act of devotion.

My effort was rewarded by the view. Despite the rainy day, it was good to be outside of big city Hong Kong. The monastery below, the mountains, shrouded in cloud much of the time: it all made a pleasing impression.

The Buddha (34 meters tall or 112 feet) stands on a base three stories tall, and a terrace encircles it, holding six much smaller statues of Devas making offerings to Buddha. Visitors can walk all the way around the base.

You can also go inside, but only into the base, emerging just under the Buddha. The monastery charges HK$38 for the privilege, about US$5. There are some sacred texts inside, but almost all of the signage is in Chinese, so it didn’t mean much to me. I’d say it wasn’t worth paying to go inside, except that the fee also includes a “snack” down at the monastery’s vegetarian restaurant below.

Later, when I went to get the snack, I expected something small, perhaps one of the sweet dim sum items they displayed. Instead, a “snack” involved a big pile of fried noodles, two of the sweets, and a cup of tea. It was more than enough for a whole meal.

You might also enjoy reading these articles about Hong Kong:

The monastery at the base of the statue – at least the part that outsiders may enter – seems to be a fairly typical Hong Kong shrine. Incense fragrance fills the air, and worshippers stop to pray and light more incense in front of the three Buddha statues displayed inside. Others, both local and foreigners like me, pose and snap pictures, then go have a snack at the vegetarian restaurant run by the Buddhist nuns.

The way most visitors get to the Big Buddha on Hong Kong’s Lantau Island is by taking the long Ngong Ping cable-car ride from Tung Chung, which is reachable by metro from Hong Kong. My plan was to do that on the way down, to save some money by paying one way instead of round trip. Besides, I wanted to visit Tai O first, then visit the Big Buddha.

I was nervous about the cable car though: the idea of hanging from a cable high off the ground scares me in any case, but, on top of that, there was a strong wind, with on and off rain and the occasional rumble of thunder. Is it safe in a cable car with that much wind?

The few hundred meters I walked to the cable car terminal from the large plaza presented quite a contrast to the religious atmosphere I’d just left. Lined with restaurants, shops and “attractions,” it had an air of Disneyland: too clean, too planned, a whitewashed version of Hong Kong. I didn’t stop to sample anything: Italian, Turkish or a multitude of other foods; multimedia shows vaguely pertaining to Hong Kong; or shops selling high-end souvenirs.

I was greeted at the cable car ticket counter by a sign saying that the cable car was closed “due to thunder.” I’m not sure quite what that meant. Perhaps they had closed the cable car because lightning is dangerous. Or perhaps the real issue was wind but whoever wrote the sign didn’t know the word for wind. Either way, part of me was relieved: the cable cars passing by empty swayed alarmingly in the breeze. Instead, I walked back through Disneyland to the bus stop.

Passing some feral cattle (!), I settled into the queue to wait. A few moments later, a girl ran up to the people behind me in the line and declared something quite emphatically in Chinese. Guessing what she might be saying, I asked “Is it open?”

“Yes, it’s open again,” she replied, and she, her friends and I headed back up to the ticket counter.

Riding the cable car to the Big Buddha

There are two types of cabins, the regular one and the premium “Crystal Cabin,” which has a transparent glass bottom. Even the thought of that made my stomach do flips. People actually pay extra for that?

Once I had my ticket, I was fortunate to end up in line with a group of Canadians, who were very reassuring about the cable car. They’d come up in it when the weather was far worse, and it helped my nerves to see that they were choosing to take it down again rather than switching to the bus. They told me they had heard that the bus is much scarier, since it twists and turns its way down the mountain.

The cable car trip really wasn’t so bad. It was still windy, with a smattering of rain, but there were eight of us in the cabin, which added enough weight to stop it swinging much. The views, meanwhile, are magnificent: in 25 minutes, it travels 5.7 kilometers, passing over lushly overgrown mountains and valleys, over Tung Cheng Bay, by the airport, at times quite high off the ground. Three times the car goes through a structure which changes its direction, so essentially it’s four different cable car rides strung together.

Click on this link for skip-the-line tickets for the cable car!

If you ever visit Hong Kong, my husband is right: this is worth doing. The Buddha is breathtaking, both literally as you climb the stairs and figuratively in terms of the beauty of the statue and the expanse of the view. So is the cable car, which offers such an array of scenery. Do it on a clear day, though, because then your views will reach even further.

If you’d prefer not to arrange it all yourself, this guided day tour includes hotel pick-up, the cable car, the Buddha and the monastery, as well as a visit to Tai O including a boat ride.

Book your hotel in Hong Kong through this link to Booking.com.

Getting to the Big Buddha on Lantau Island

At Tung Chung you can either:

The other option is to go to Central Pier and take First Ferry to Mui Wo. From there, take Bus 2 to Ngong Ping, which will take about 35 minutes.

The way I got there from Tai O was to take Bus 21, which took about 15 minutes.

Climbing the stairs to the Big Buddha is free. If you want to go inside, you’ll have to pay a small fee. When I went it was the equivalent of about US$5 and included a vegetarian “snack” at the monastery below. You can also just pay for the food at the monastery.