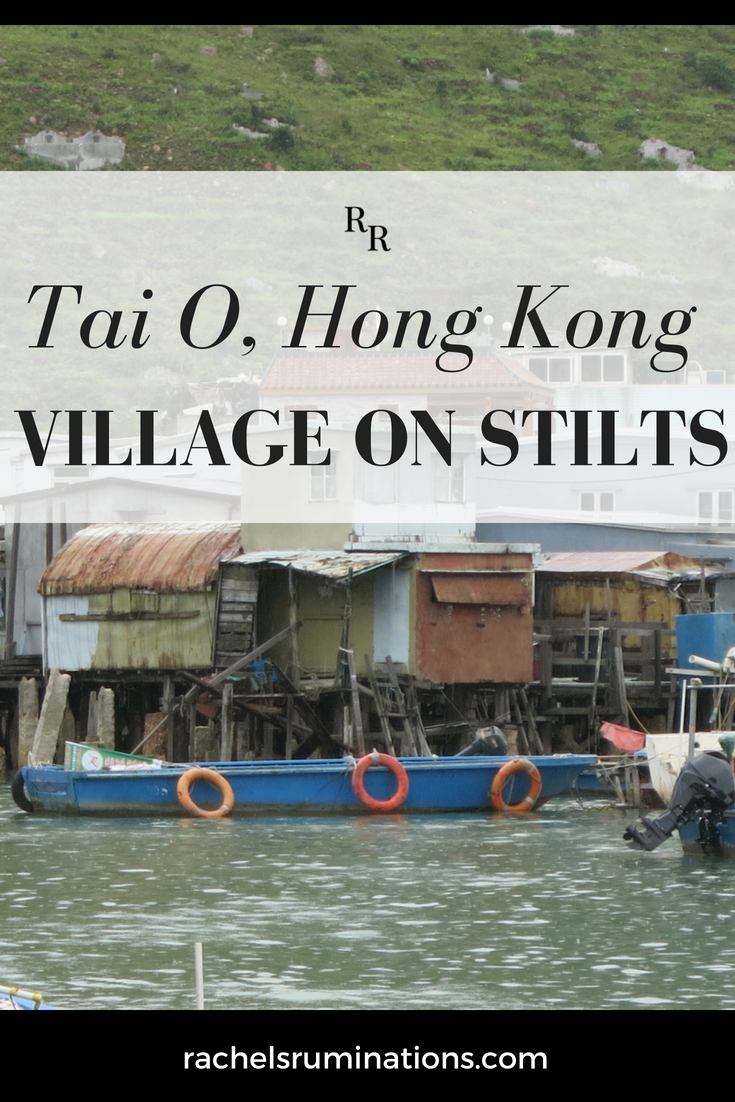 People who go to Lantau Island in Hong Kong usually go for one of two reasons: to use the airport, or to visit the Big Buddha. But there’s another, somewhat less-visited tourist destination on the island: Tai O village.

Tai O was originally a fishing village, known for its houses on stilts. It makes a picturesque prospect when viewed from afar, with its colorfully-painted boats bobbing gently next to the small stilt houses, also colorful. Jumbled every which way, it’s hard from a distance to see any land or roads between the houses.

In Tai O village, however, as I walked around, it didn’t seem quite so picturesque. Some of the houses … well, I’m not sure what the dividing line is between “house” and “shack.” Some of them looked to be in a terrible state of repair, unlikely to keep the rain out, patched with bits and pieces of wood and sheet metal. People live there?

The village experienced a devastating fire in 2000 and many of the original wooden buildings were destroyed. They were rebuilt, but the new buildings seem only marginally better than the older buildings, since they appear to be made of metal, painted in silvery grey. In the places where the paint has peeled off, the metal is rusting. Wouldn’t a metal house be incredibly hot?

All of the houses seem fragile, like a strong wind would blow them away. They have monsoons in Hong Kong, and I wondered how many would survive the next one.

The sanitation situation as well seemed lacking. As I sat on the balcony of a teahouse waiting for my tea, I surveyed the group of houses across the water from me. The sound of running water drew my attention to one of them, and I saw that a large pipe was emptying into the water below the house. A moment later, a smaller amount of water exited another nearby pipe. Someone had just used the toilet and washed his or her hands.

Every place where the water wasn’t moving—the corners, as it were—had accumulated a collection of floating trash: plastic bags, bottles, and so on. On land, too, many houses were surrounded by assorted junk: rusted bicycles, defunct washing machines, all sorts of bits and pieces.

Nevertheless, I enjoyed my stroll around the village. Some of the houses are on dry land, and some, like the teahouse where I stopped, sit with one edge on dry land and the bulk of the building on stilts over the water. It was a hot day, and elderly people had left their doors open for air, allowing me to have a quick peek into their lives.

On the main roads—really just walking paths—the primary business was seafood: mostly dried fish and other creatures. I couldn’t identify most of what I saw, and since I wasn’t shopping, didn’t stay long to look.

Do I recommend visiting Tai O village in Hong Kong? I like to get off the beaten path, but had mixed feelings about this place. As a tourist, I enjoy the picturesque, but part of me wants a more comfortable picturesque-ness. What I mean is, for example, visiting the Baix Empordà region in Spain, and knowing that all those houses that my mother would have called “cute” or “quaint” are likely perfectly livable inside, with running water and good sanitation and indoor toilets.

You could call the houses in Tai O pretty, but only from a distance. How is this any different from going to visit a slum in, say, Mumbai or Rio de Janeiro? Isn’t it “poverty tourism”?

To get to Tai O, I took bus 11 from the Tung Chung MTR metro station. It climbed and then descended disturbingly fast down narrow, mountainous roads. Fortunately, the paving was good, if not the driving.

You can also take a ferry from Central Pier (number 6) to Mui Wo and then take bus 1.

This pass covers your round-trip cable car, bus fares on Lantau Island and a Tai O boat excursion, plus other options.

If you enjoyed this article, please share it with others through whatever social media you prefer. The following images are formatted for Pinterest.