As you’ve probably guessed from my posts about Sweden, my trip was a great success. I took part in two familiarization tours: one before and one after the TBEX conference. The first was an introduction to the Stockholm archipelago and Swedish military history. In the second, I visited several manor houses and castles in the southern province of Sörmland.

In the few days I was free to choose my own path in Stockholm, I visited several sights, including taking a tour up Storkyrkan tower, going to the Nordic Museum, the Medieval Museum, and several other destinations. 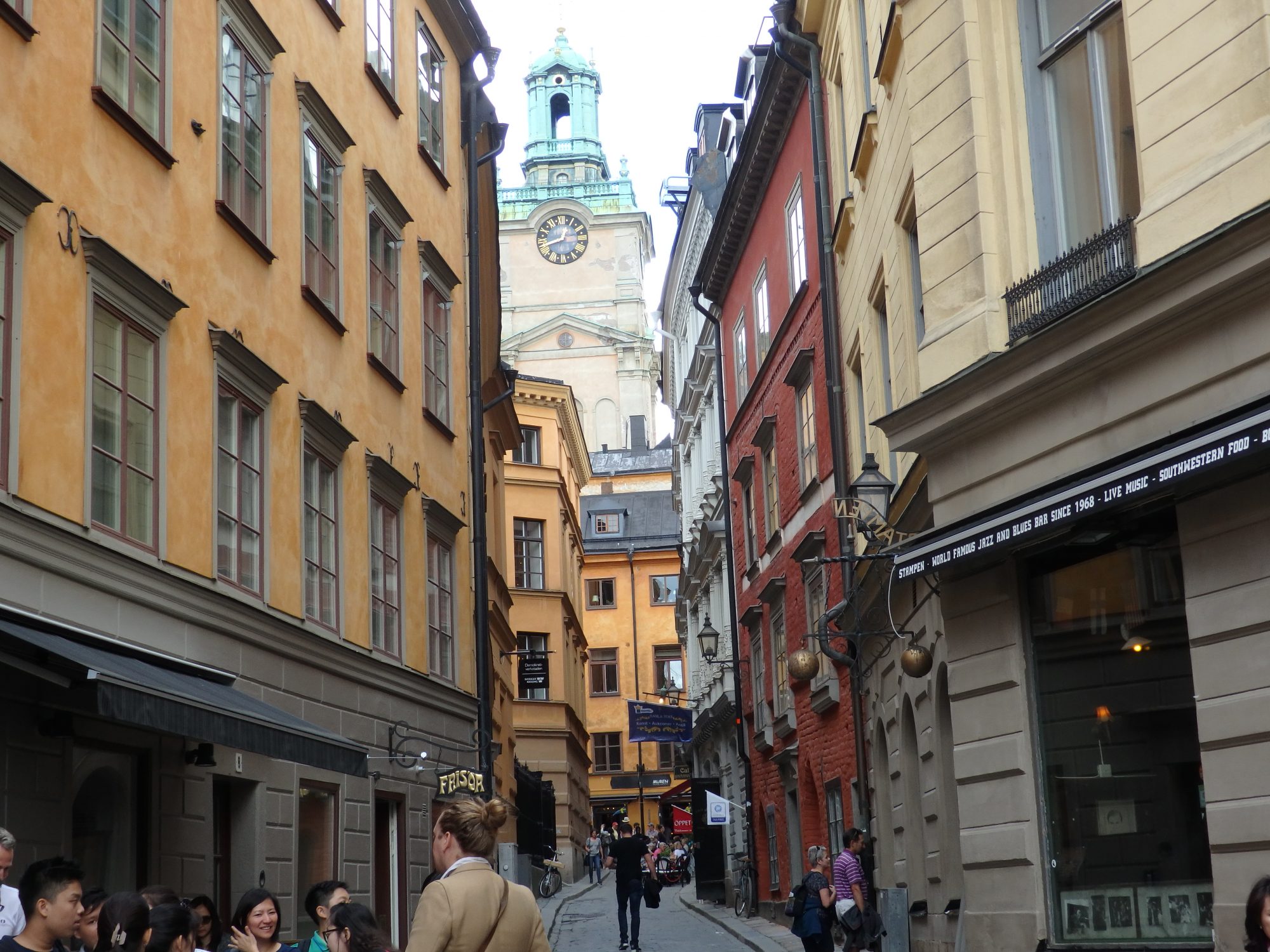 a pretty street in the oldest part of Stockholm, Gamla Stan

I was able to do much of this because Visit Stockholm kindly provided a free Stockholm Pass (affiliate link) and free transportation pass for each of the bloggers attending the conference.

One of the items covered by the Stockholm Pass is the Hop On Hop Off bus and boat operated by Strömma.

This was the only experience I had in Stockholm that was negative in any way.

Hop On Hop Off, but which one?

The first problem I and many other bloggers encountered was figuring out which Hop On Hop Off bus to get on. The flyer provided by the company shows a route with 24 stops. It’s not clear, though, on its rather cartoonish map, where exactly the stops are, or how they are marked. 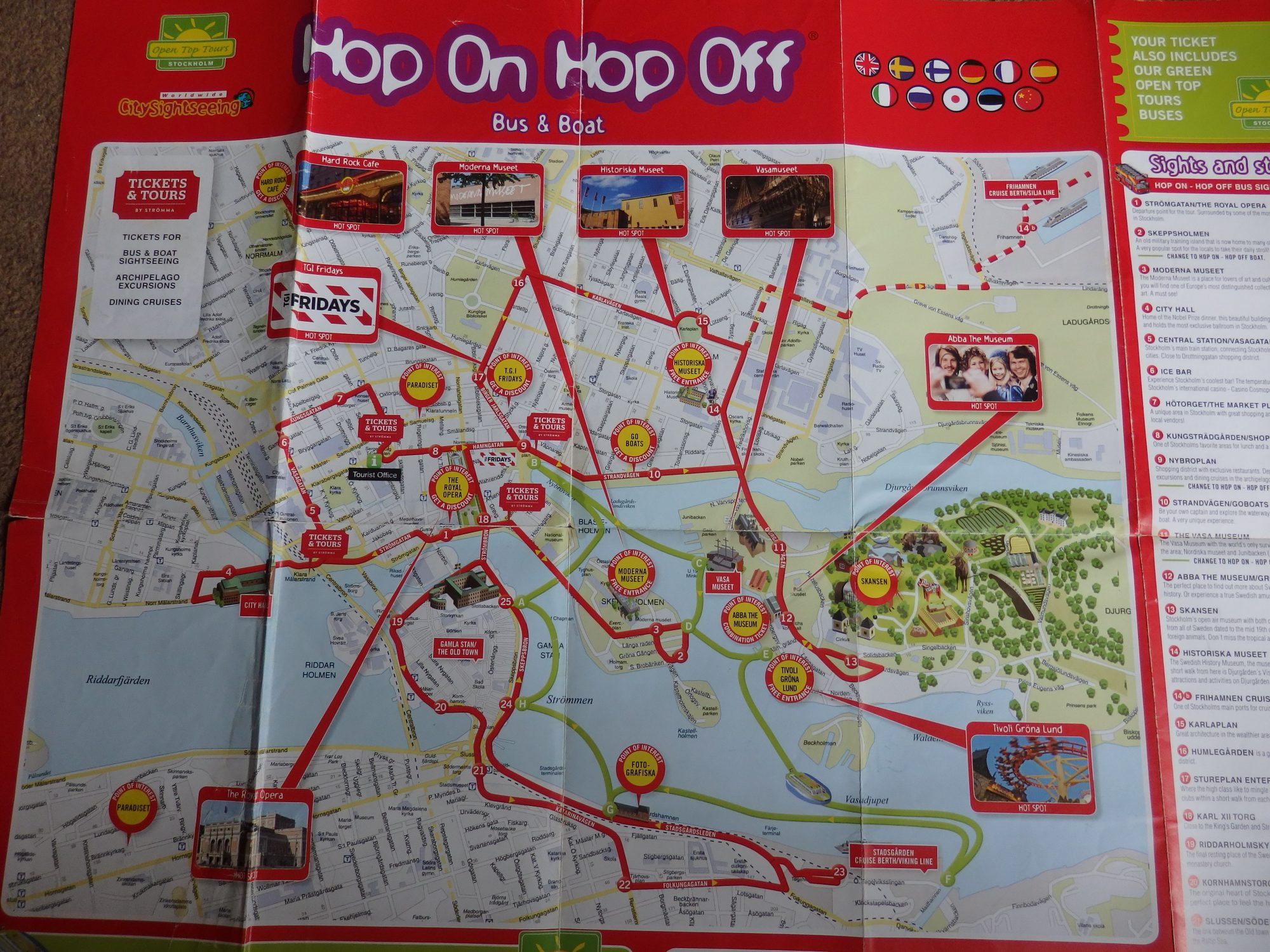 the printed map for the Hop On Hop Off routes: red for the bus, green for the boat

Which leads to one of the major problems with the Hop On Hop Off bus: there are two companies with the same name. Both are called “Hop On Hop Off,” and their logos are very similar. They both do circular routes, and their stops are nearby each other’s stops. One has a red bus, while one has both green and red buses. One has open top buses, but not all of their buses are open top.

The Stockholm Pass we received only covered one of the companies, not both. That meant that tourists end up waiting at the wrong bus stop, only to find out from the driver of the arriving bus that they’ve waited at the wrong place.

This happened to me several times. One of those times, the driver of the competing company, when I asked where I could catch the other company’s bus, sent me in the wrong direction. A fellow blogger, Cacinda Maloney of PointsandTravel.com, told me this:

Even the guy who sold the tickets was scamming people and telling them to hop on to the competitor’s bus, when he knew he was sending them to the wrong one.

Clearly these two companies do not happily coexist, to the detriment of the tourists.

You would think, given that Stockholm was crawling with travel bloggers that week, that the Hop On Hop Off company would make sure that things run smoothly. It didn’t.

It was the middle of July—peak season for tourism in Stockholm—and the buses filled up. Once they were full, they passed by the next stops until someone wanted to get off. When I wanted to take the bus one day, two buses passed by (on an every 20 minutes schedule) before I got to board. The waiting tourists did not stand in a neat line and, feeling increasingly desperate after waiting for up to an hour, pushed and shoved to get in. Then extra people were allowed to board too, but had to stand.

The Hop On Hop Off bus is meant to be a tour bus. Passengers are given small headphones so they can listen to narration about the sights they are passing. The plugs for the headphones are next to the seats, which means you have sit to use them. You also have to be able to look out the window. The people who had to stand could not do either one.

How NOT to run a bus route

So why was it so crowded? The company certainly was not ready for the tourist numbers it got. It seemed to me that it could have predicted a peak at that time of year and added extra buses along the route. Instead, we just were expected to wait. I’m sure some people—those who hadn’t already spent money on the Stockholm Pass—just went to the competing Hop On Hop Off company. 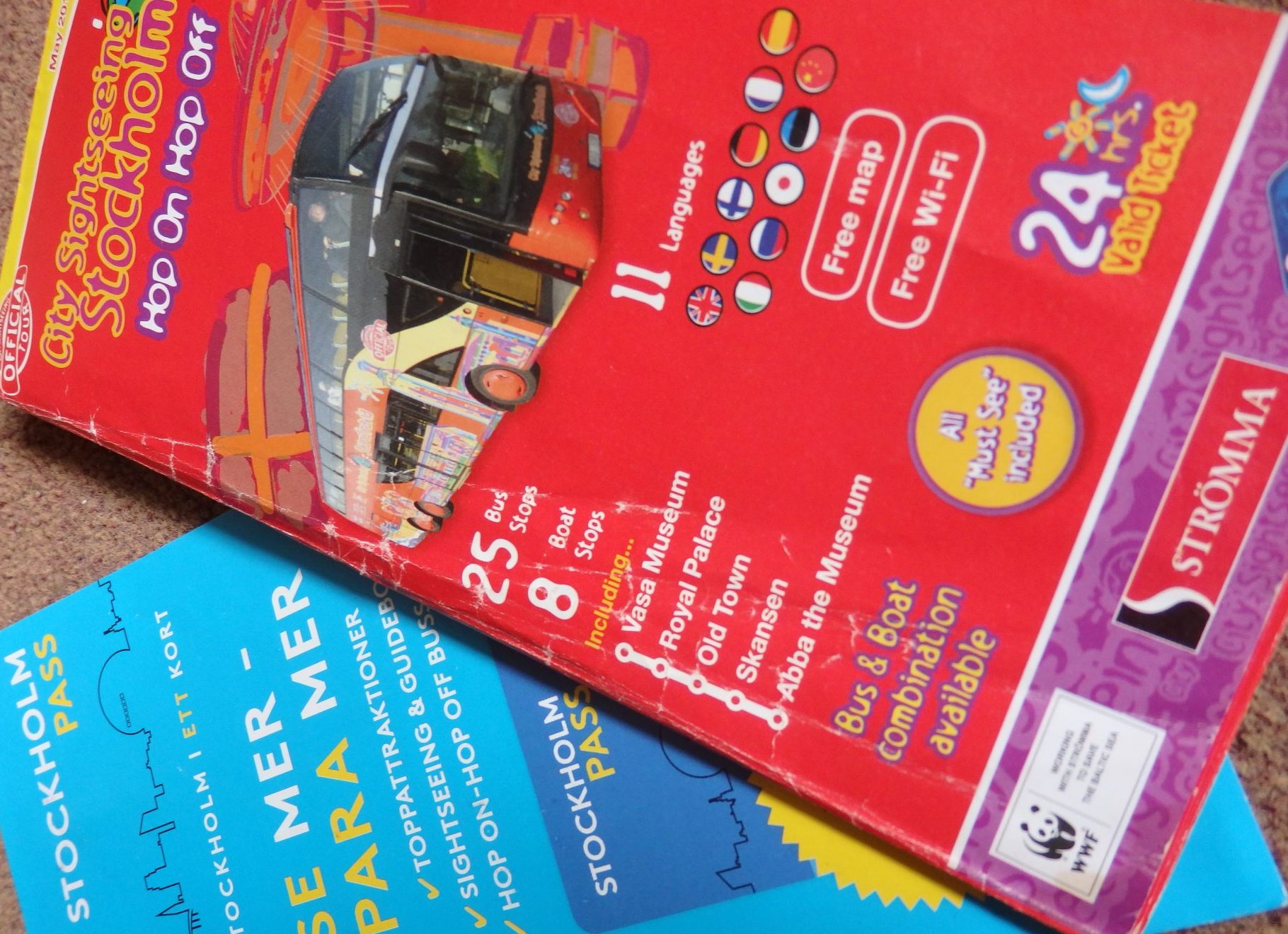 leaflets from the Hop On Hop Off and the Stockholm Pass

But it gets worse. Here’s Cacinda’s story:

The other two people I was with ended up leaving, but I persevered. However, I wish I hadn’t, as we took some mysterious trip out to the cruise dock, as apparently the bus caters to the cruise line tourists!  Upon returning to the main area of town, I promptly got off, I did not want to experience any more than that!!  It was dirty and packed full of tourists.

I was astonished to hear this. At peak season, knowing how much their buses would be in demand, they picked up cruise tourists and ran the same route with them? Without putting on extra buses? Not a good way to run a business!

The Hop On-Hop Off Boat

I also tried out the Hop On Hop Off boat, run by the same company. It covers eight stops on several of Stockholm’s islands. It provides a good quick look at the center part of the city and, like the bus, includes recorded narration about particular buildings and islands, but without any broader chronological history. 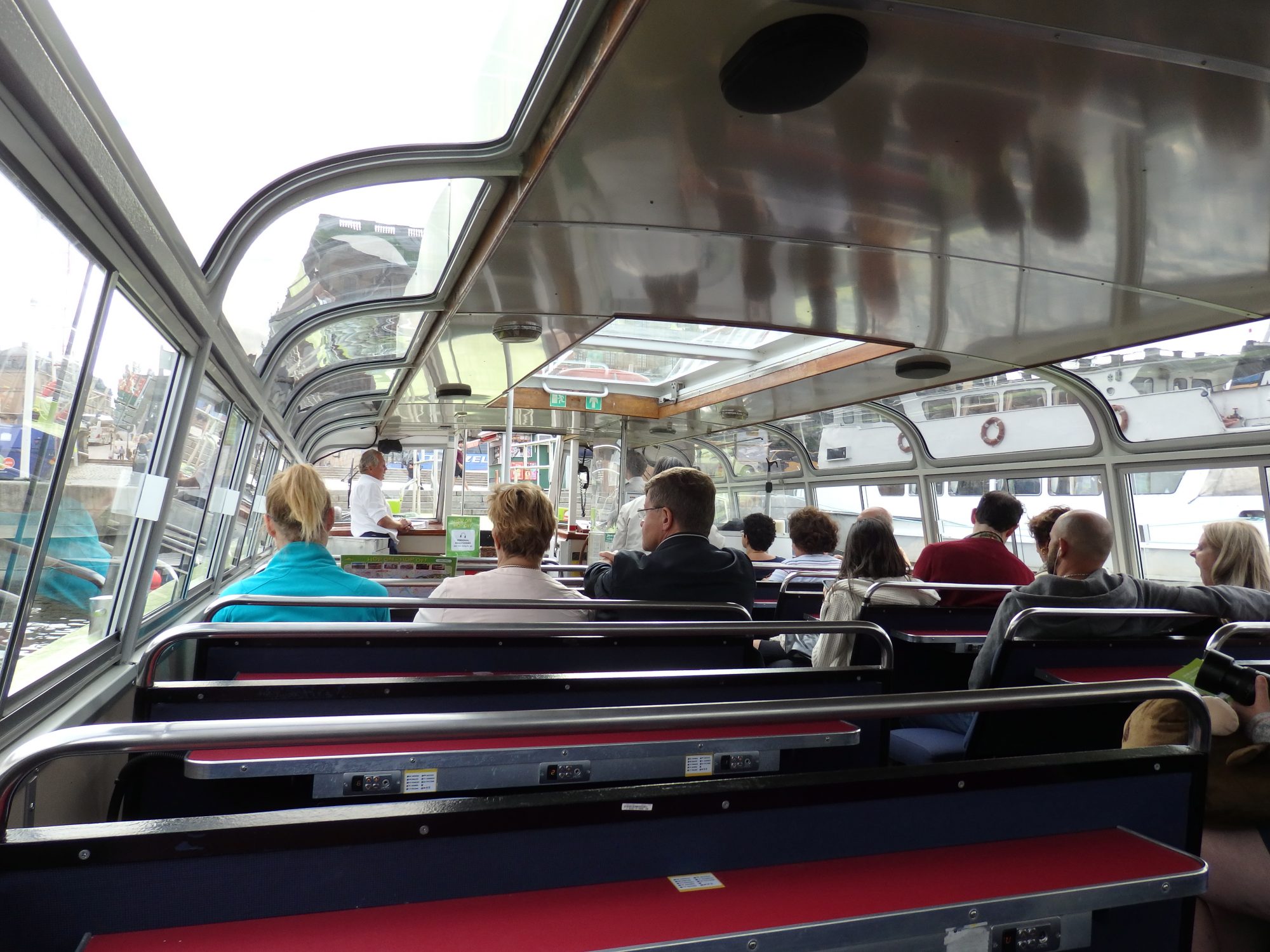 Inside a Hop On Hop Off boat

I took one of the last circuits on the boat one day. It wasn’t crowded, but food wrappers and leaflets littered the floor. Attached to the back of each seat is a narrow shelf and, since the only trash can is in the bow of the boat, people leave their litter on the shelves. It gets knocked to the floor very easily, and stays there.

The next morning, I took a boat again for just a couple of stops. This time, it was cleaner. It would help if they swept it after each circuit and not just once a day.

The bench seats are very close together, so my knees, if I sat straight, pushed up against the seat in front of me. (I’m about 5’7″ or 171 cm.) Fortunately, I could sit sideways because the boat wasn’t full.

The “floating bus” wasn’t any better [than the bus] as it was a hot afternoon and we took one step inside the boat and realized we would sweat our tushes off, so we got out of there fast!

My advice to the Hop On Hop Off companies

My advice to Stockholm tourists 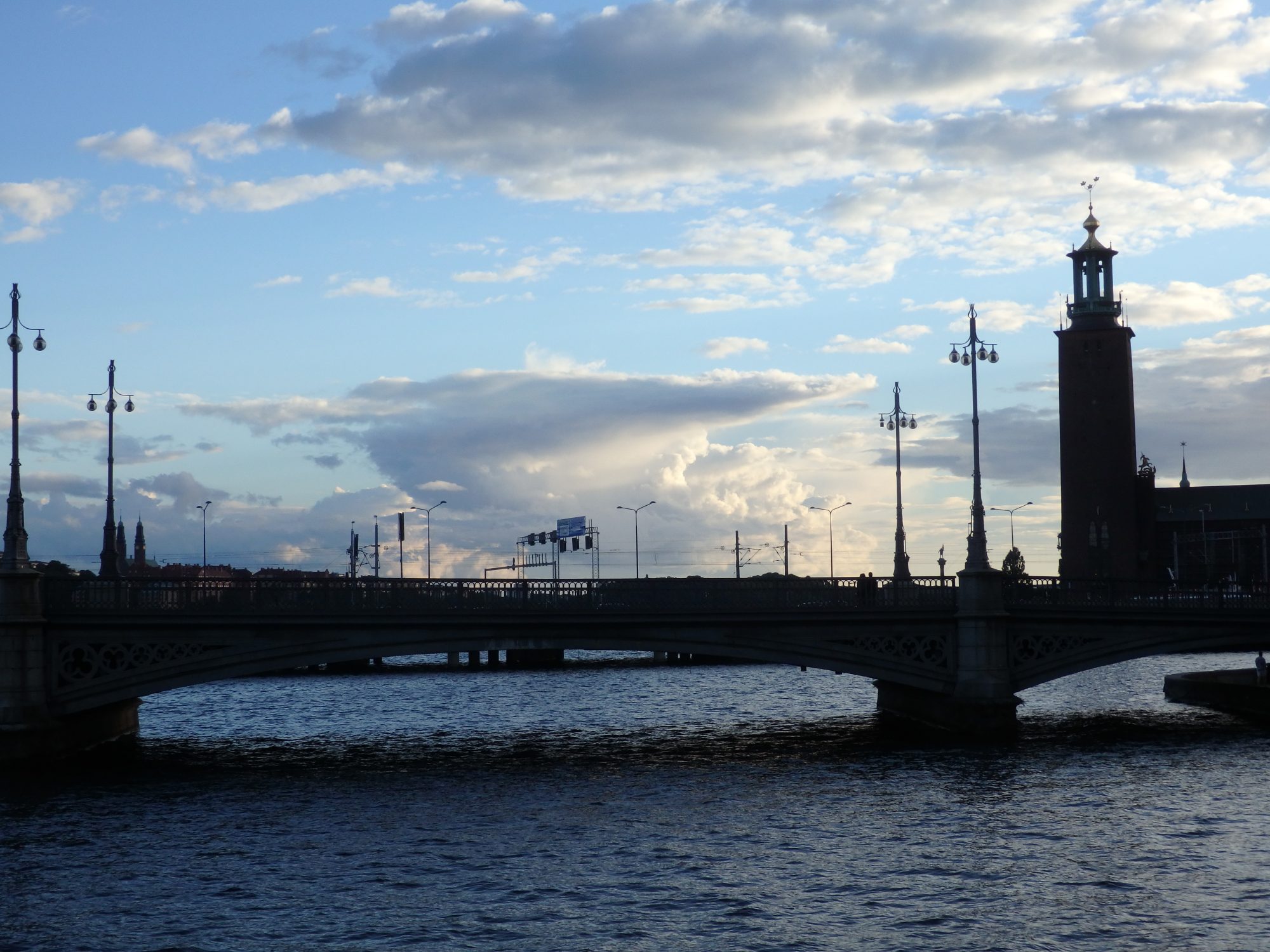 I should point out that none of this is criticism of the Stockholm Pass itself. If you are only going to Stockholm for a few days and want to take in a lot of sights while you’re there, it can be an excellent way to save money on admissions. Go to the tourist office in Sergels Torg, pick up the Stockholm Pass flyer and do the arithmetic to see if it works with your plans.

Here is a link to buy a Stockholm Pass: if you buy through this link, I get a small cut of what you spend.

Disclosure: As a participant in the TBEX (Travel Bloggers Exchange) conference, I received the Stockholm Pass for free from Visit Stockholm. All opinions are my own.