The old center of Stockholm, on the island of Gamla Stan, swarms with tourists—and probably a few locals too—in the months of July and August. 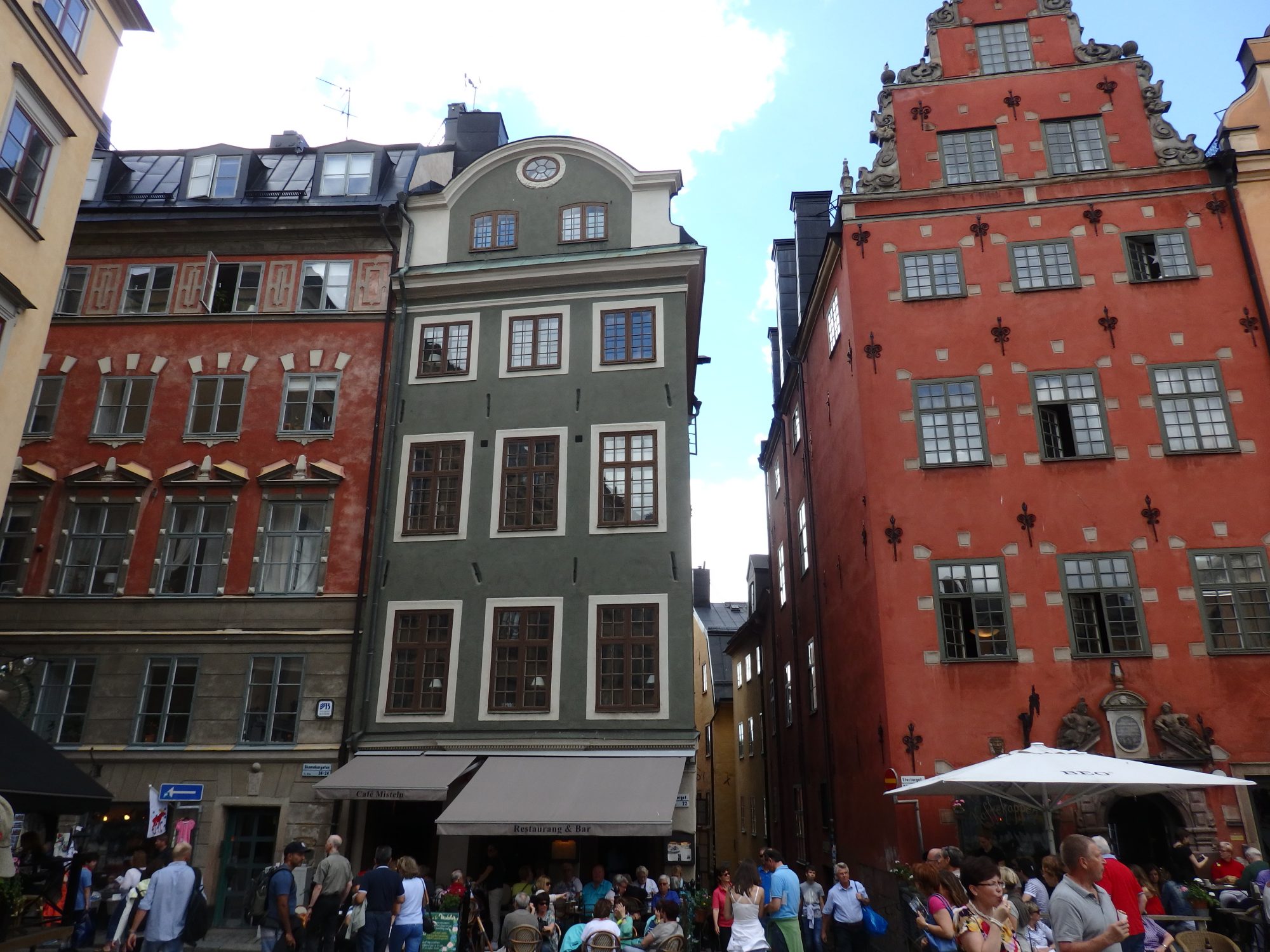 Probably the most photographed buildings in Gamla Stan, Stockholm

Among the sights they visit is a medieval-era church called Storkyrkan. What few seem to know is that Storkyrkan also offers guided tours twice a day up its clock tower, only during the summer months. When I explored Gamla Stan on my first day in Stockholm, I joined one of these tours, along with only about six other people.

This climb is not tidied up or made easier for tourists. Unlike many towers I’ve climbed, this is not one continuous stairway with the occasional landing where you can catch your breath. Instead, it’s a series of disconnected stairways, depending on what part of the tower you are passing through. 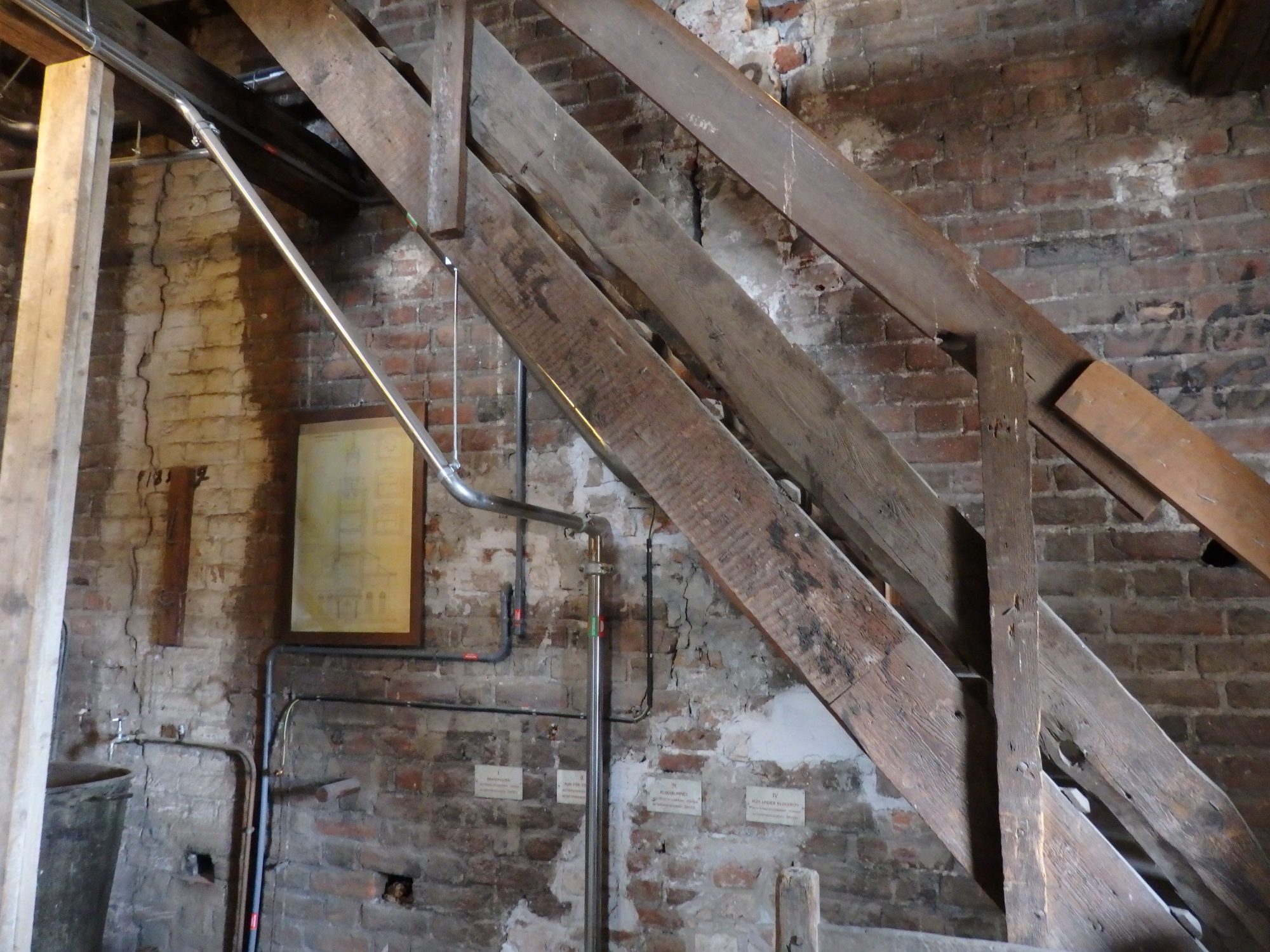 one section of the staircase going up in Storkyrkan tower

The stairways—brick at first, then, further up, wood—are worn and sometimes steep. In some places we needed to duck our heads, sometimes simply because the doorways between parts of the tower are low, but also sometimes to avoid a modern sprinkler system.

I noticed a particular smell up there too. It is the smell of ancient, solid wood. I’ve noticed it before inside historical ships and old wooden windmills. The tower’s structure includes similarly massive and ancient wooden support beams.

On the way up, we passed the tower’s bells, and the guides told us their history and purposes. The tower was originally used as a watchtower to warn the city if enemies attacked, but also to spot fires. In earlier centuries, much of Stockholm’s housing was wooden, so fire was a very real danger.

The tower itself was a challenge to build, using brick reinforced with iron. A smithy operated inside the tower to avoid having to carry iron bars all the way up from the street.

In one of the tower rooms where we stopped to look at the view, a guide pointed out an interesting mystery. A door opens to the air. It was probably used to accommodate a pulley to lift supplies from the ground. The puzzle is: why is there a door handle on the outside of that door? 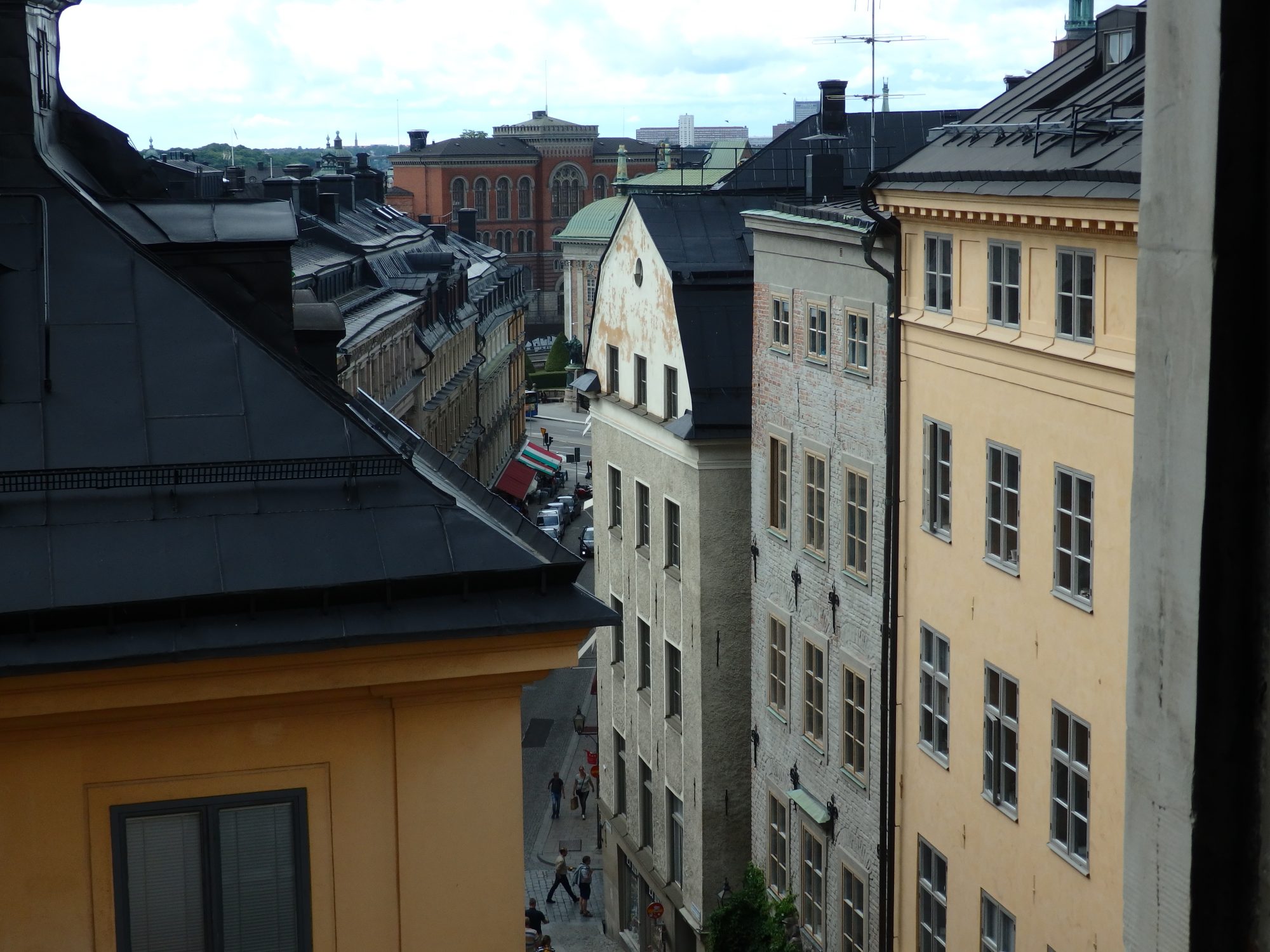 The view from partway up Storkyrkan tower, through a door with a handle on the outside.

I thoroughly enjoyed the tour, and it served to give me some basic background knowledge of the general history of Stockholm as well. The two guides who came up with us—I got the impression two guides accompanied us to keep us out of danger—were pleasant and knowledgeable and spoke excellent English. 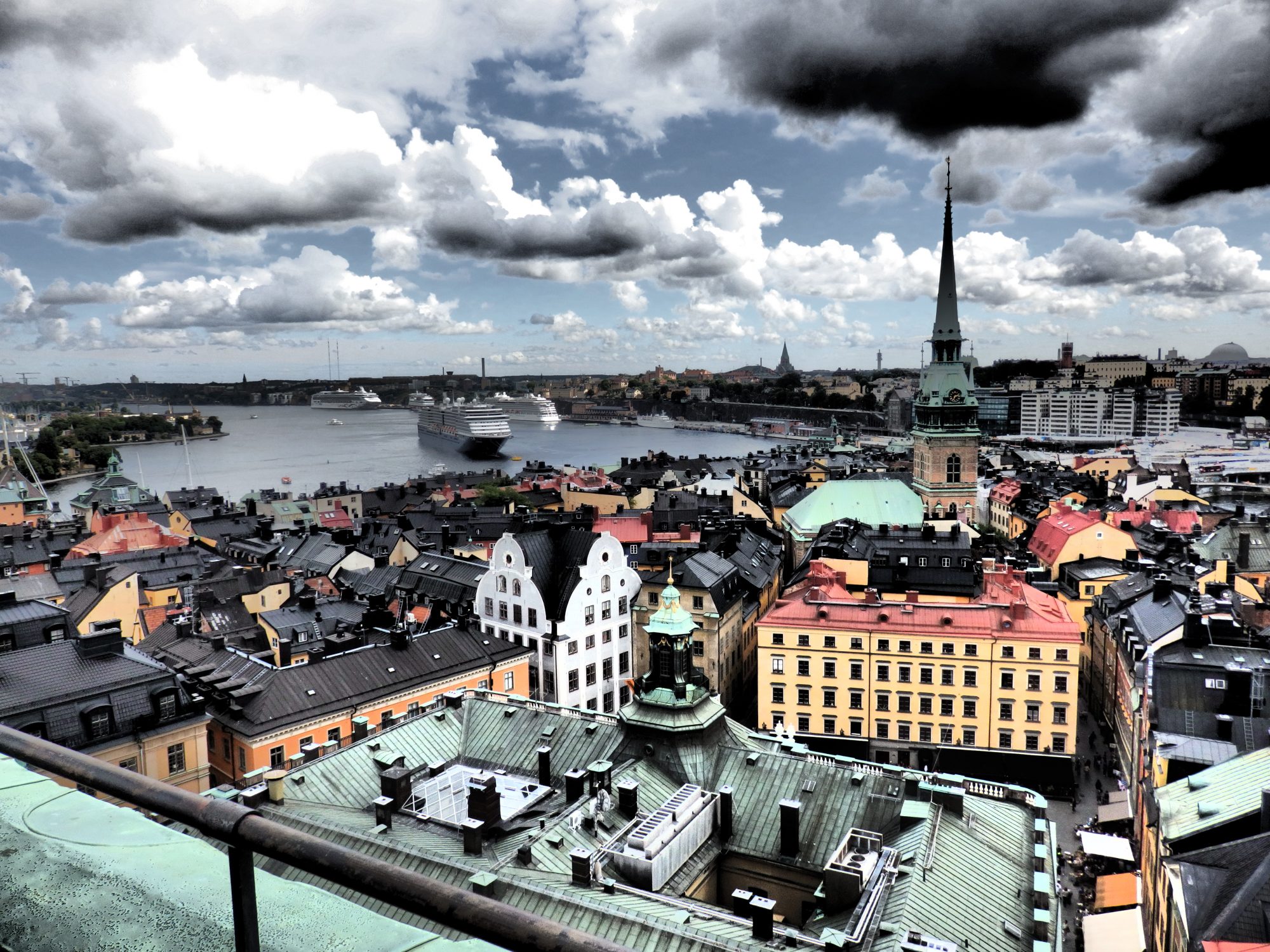 view from the top of Storkyrkan

Best of all, near the top of the tower, the guides allowed us to walk outside all the way around the little guardroom. I would definitely not recommend this if you have any fear of heights. In some places it’s extremely narrow: I had to walk sideways to squeeze between jutting parts of the tower’s wall and the outside railing. At the same time, the floor tilts toward the outside edge, adding to the feeling of being off-balance.

Despite my fear, though, the views from up there were enthralling, and any fear receded as I enjoyed them. 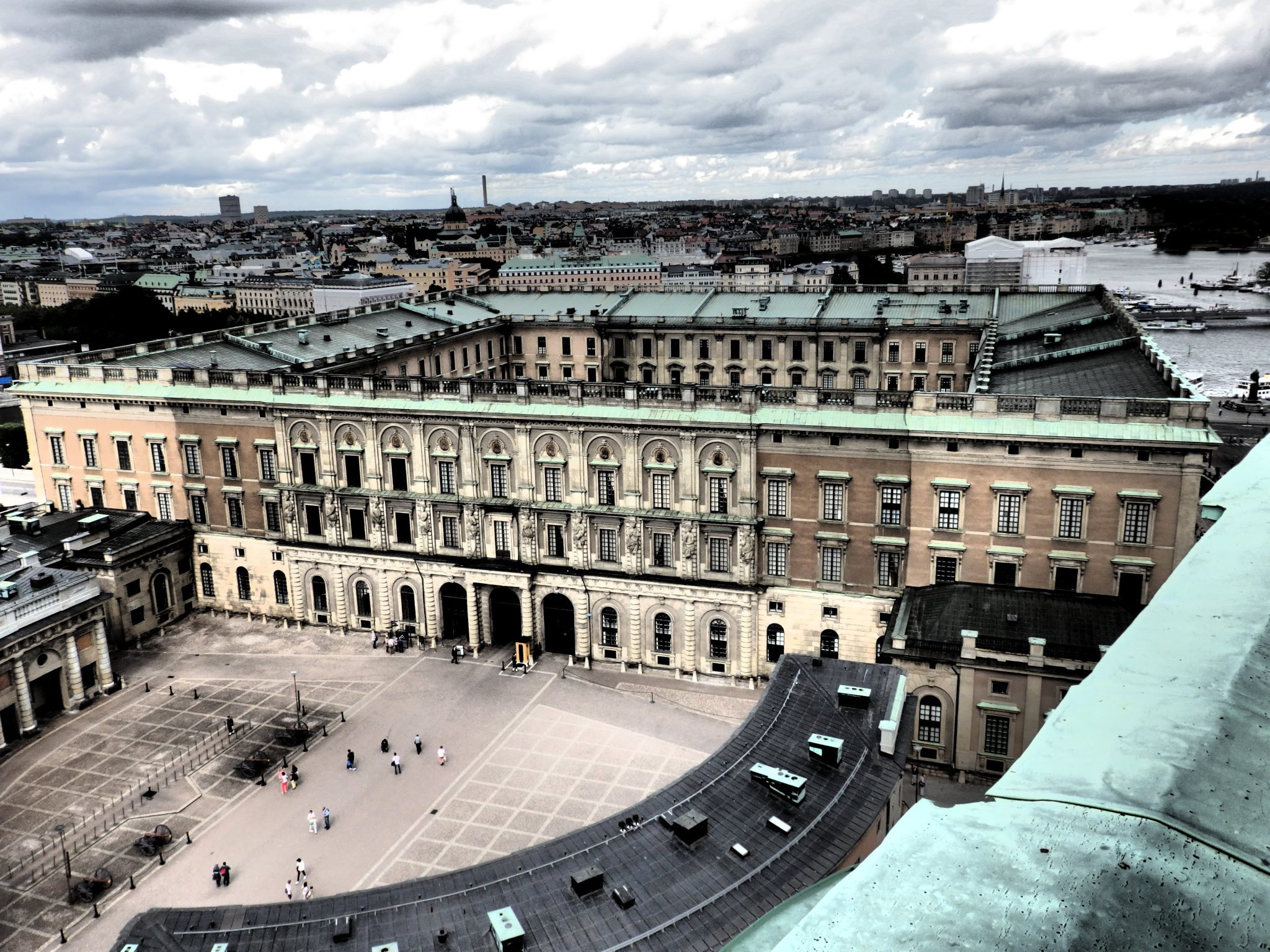 view from the top of Storkyrkan tower toward the royal palace

By the way, the church itself is worth a visit as well. Built in the late 1200’s, it became a Lutheran church during the Reformation in the 1500’s. 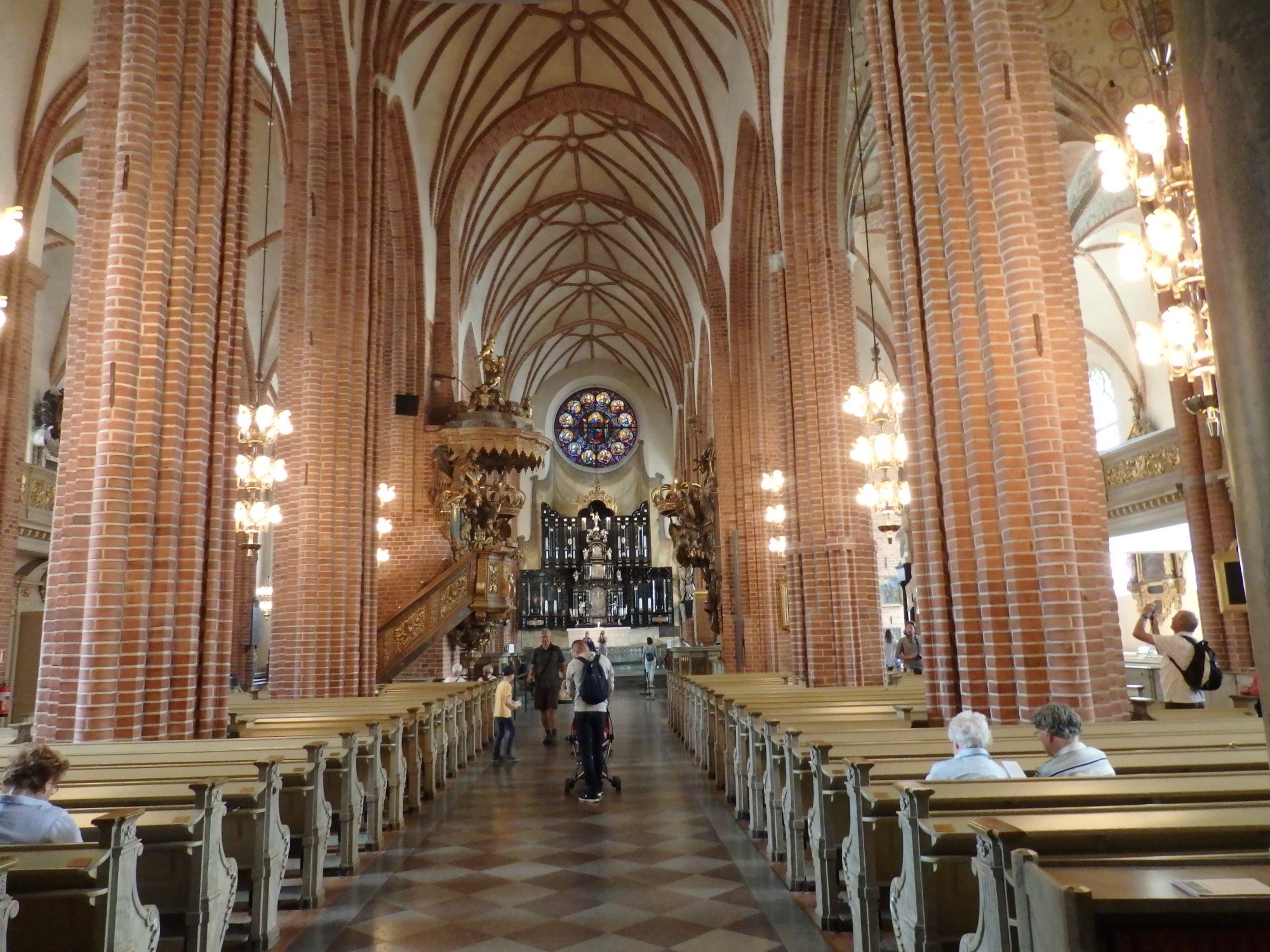 The central aisle of Storkyrkan

The most immediately striking features of this church as you enter are the pulpit and the two royal pews, all in completely over-the-top French baroque style, dating to about 1700. 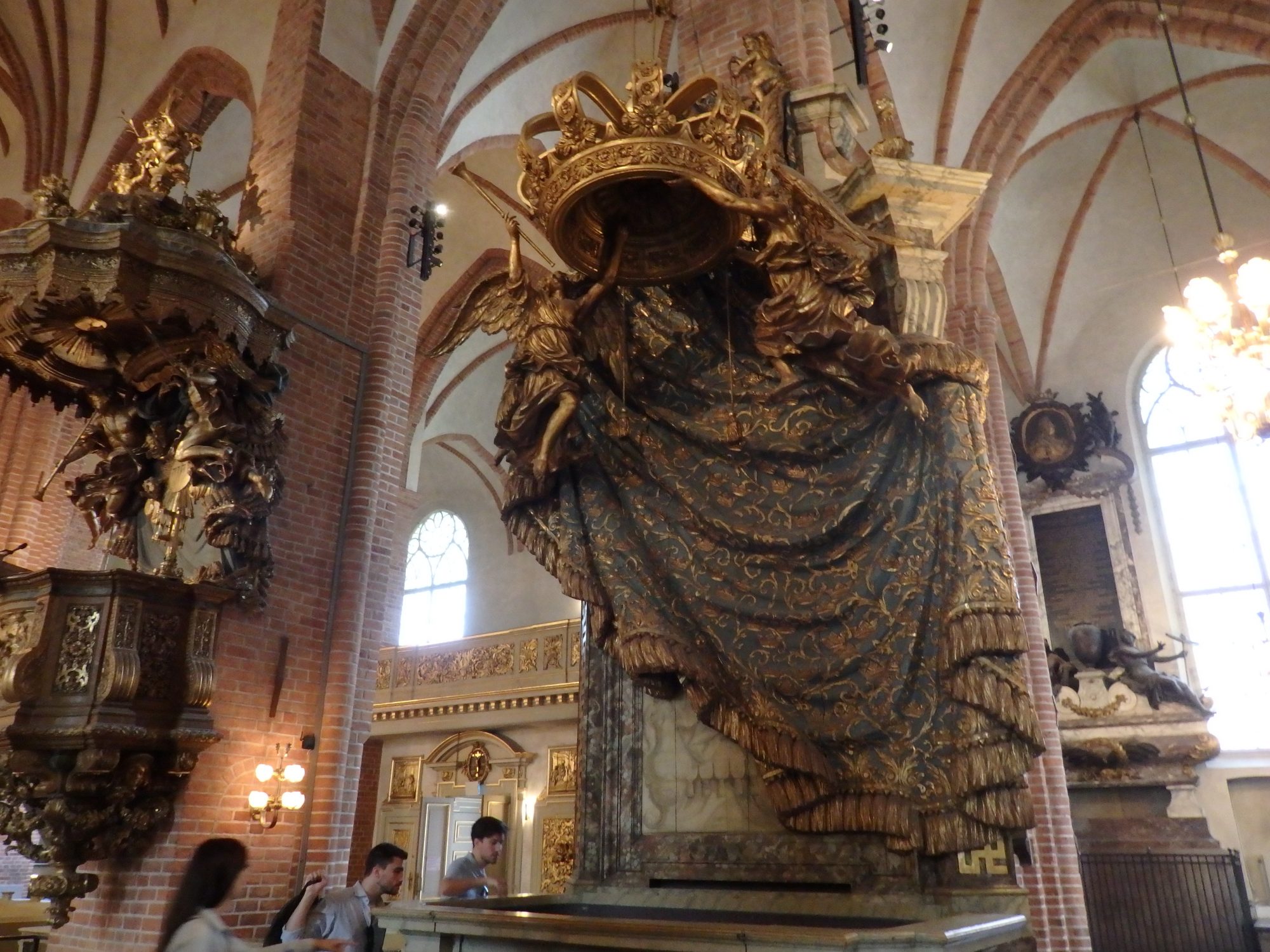 In the center, one of the royal pews in Storkyrkan. To the left, the pulpit.

The other astounding feature is the huge wooden statue of St George and the dragon. It is in remarkably good condition for such detailed work, built in 1489. 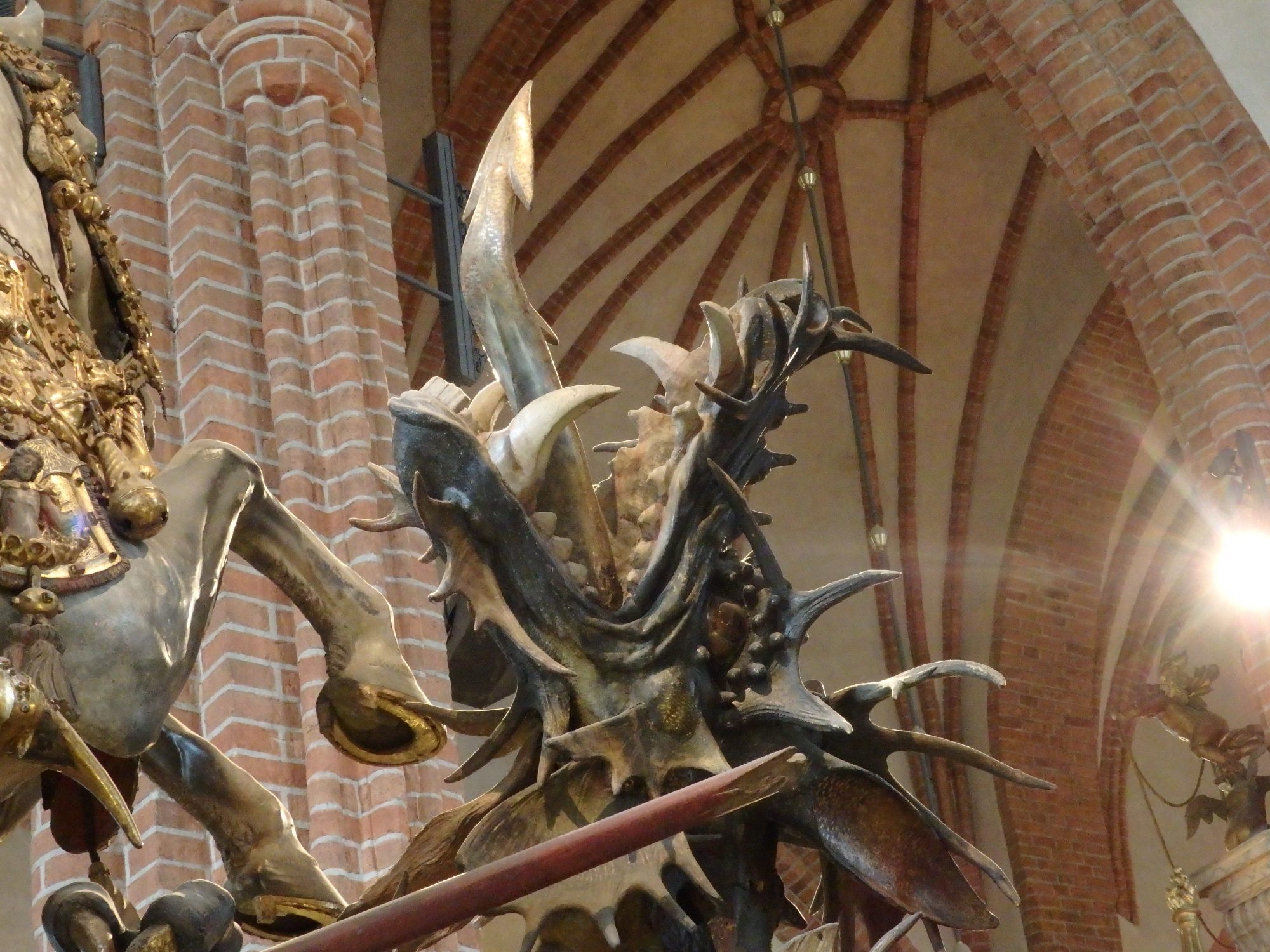 If you go to Stockholm, you’ll undoubtedly go see Gamla Stan: everyone does, and for good reason. Make sure, while you’re there, to check out Storkyrkan as well. If it’s summertime and tours up the tower are available, don’t hesitate. It’s worth the effort.

To read more about what to see in Gamla Stan, see To Travel Too’s post on why you should visit Gamla Stan in Stockholm.