Exploring the Nordic Museum in Stockholm reminded me of some of the small-town museums I’ve visited before. Often a seemingly random collection of objects donated by residents or local companies, they offer insight into the area’s culture and history. I enjoy them because their “smallness” is often quite amusing. 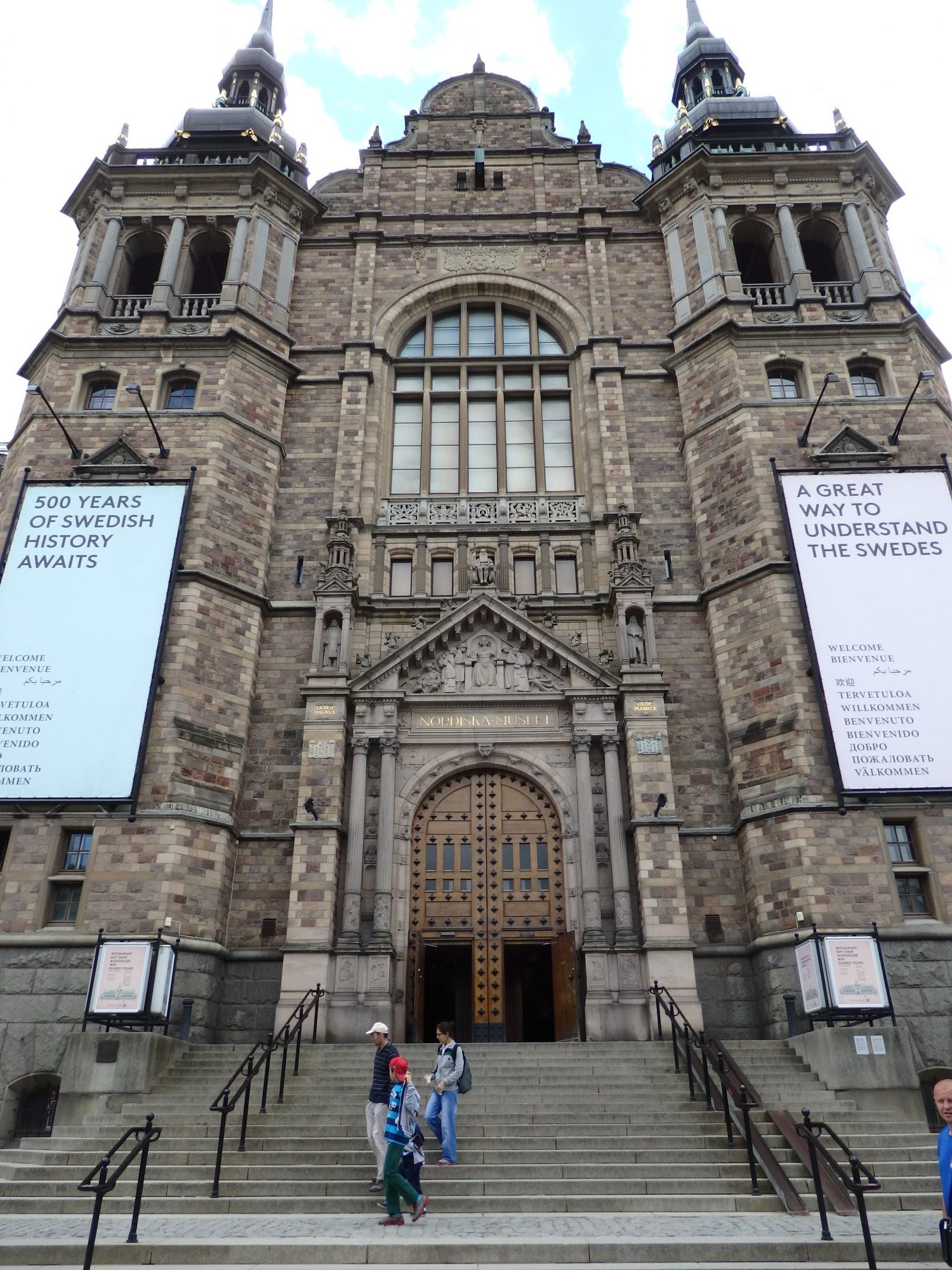 The Nordic Museum struck me as being a bigger, better funded version of those obscure museums. So the collections seem just as random, but are well-presented and extensive.

The 1907 neo-Renaissance building centers on a massive hallway, dominated by a huge statue of Gustav Vasa who ruled Sweden from 1523 to 1560. (He was the one responsible for the Vasa ship.) 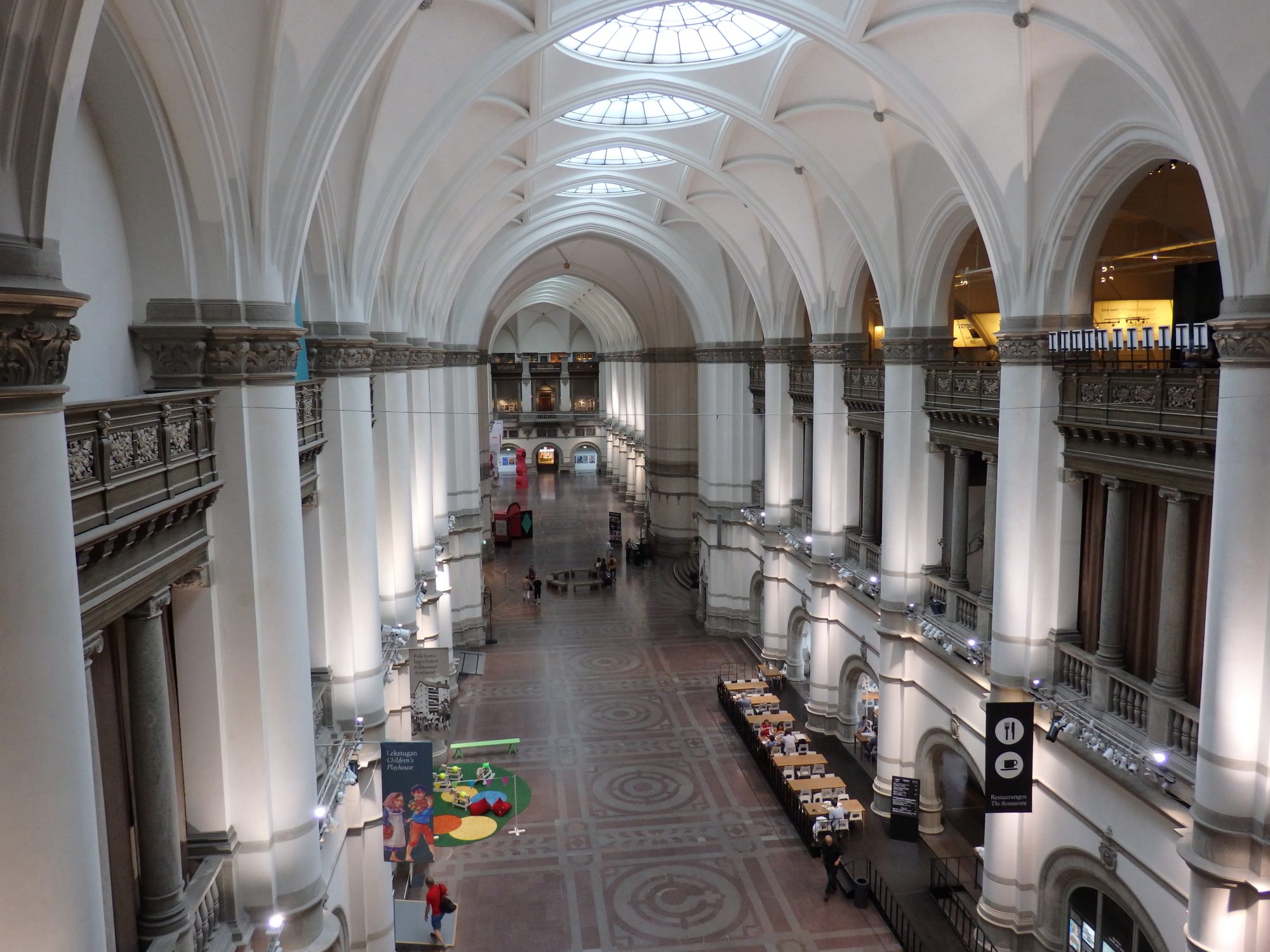 The main hall in the Nordic Museum

I enjoyed the display on clothing and fashion through the centuries in Sweden, most of which were modelled on mannequins. The most interesting part, though, was a film showing a person (one man, then one woman) getting dressed in what I think was 18th century clothing. When you see women in the voluminous skirts of a past era, you don’t tend to think about how it all gets there. This film simply showed the process of getting dressed, starting from basic underwear. It was a very complicated and slow procedure, both for the man and the woman: no zippers or velcro! 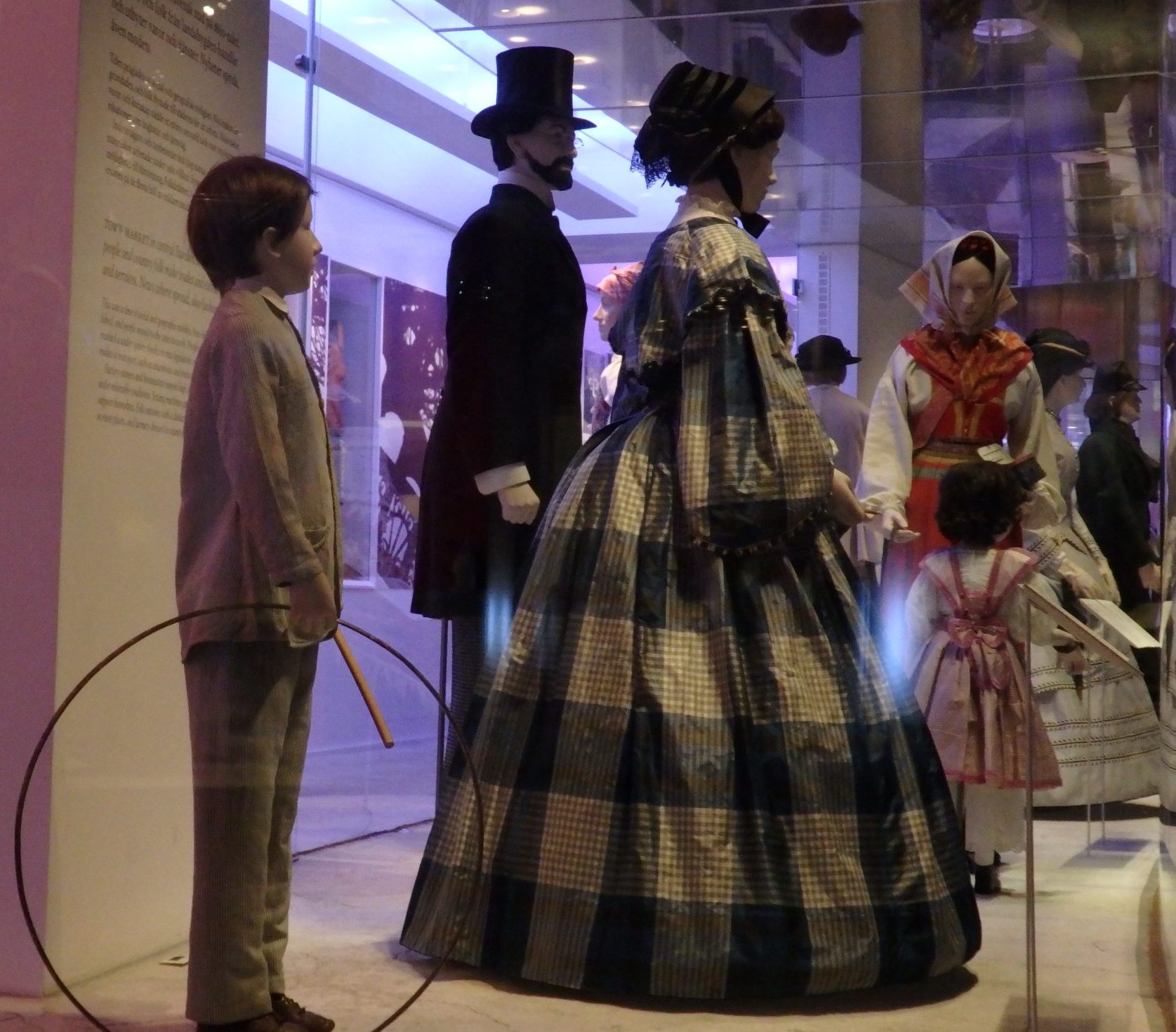 part of the fashion collection at the Nordic Museum

I learned about the culture of the indigenous Sami people through a series of artifacts and a few films. I never knew how badly the Swedish government treated the Sami, including suppressing their languages and culture.

This exhibit showed me that the Swedish Society for Eugenics studied the Sami people in its research. That included things like measuring head circumferences and photographing individuals. The resulting photos traveled around the country in 1918 in an exhibition. In the photos, Sami people stare into the camera with expressions which I found somehow moving. (I learned later, at the Jewish Museum, that the Society studied Jews as well and photographed them in the same way.)

The furniture and folk art section includes lots of pieces painted in a style that I already associated with Sweden: wooden, and painted in bright colors. What makes something art, and what makes it craft? Either way, the museum contains some beautiful, homey pieces that I could imagine would be treasured family heirlooms. 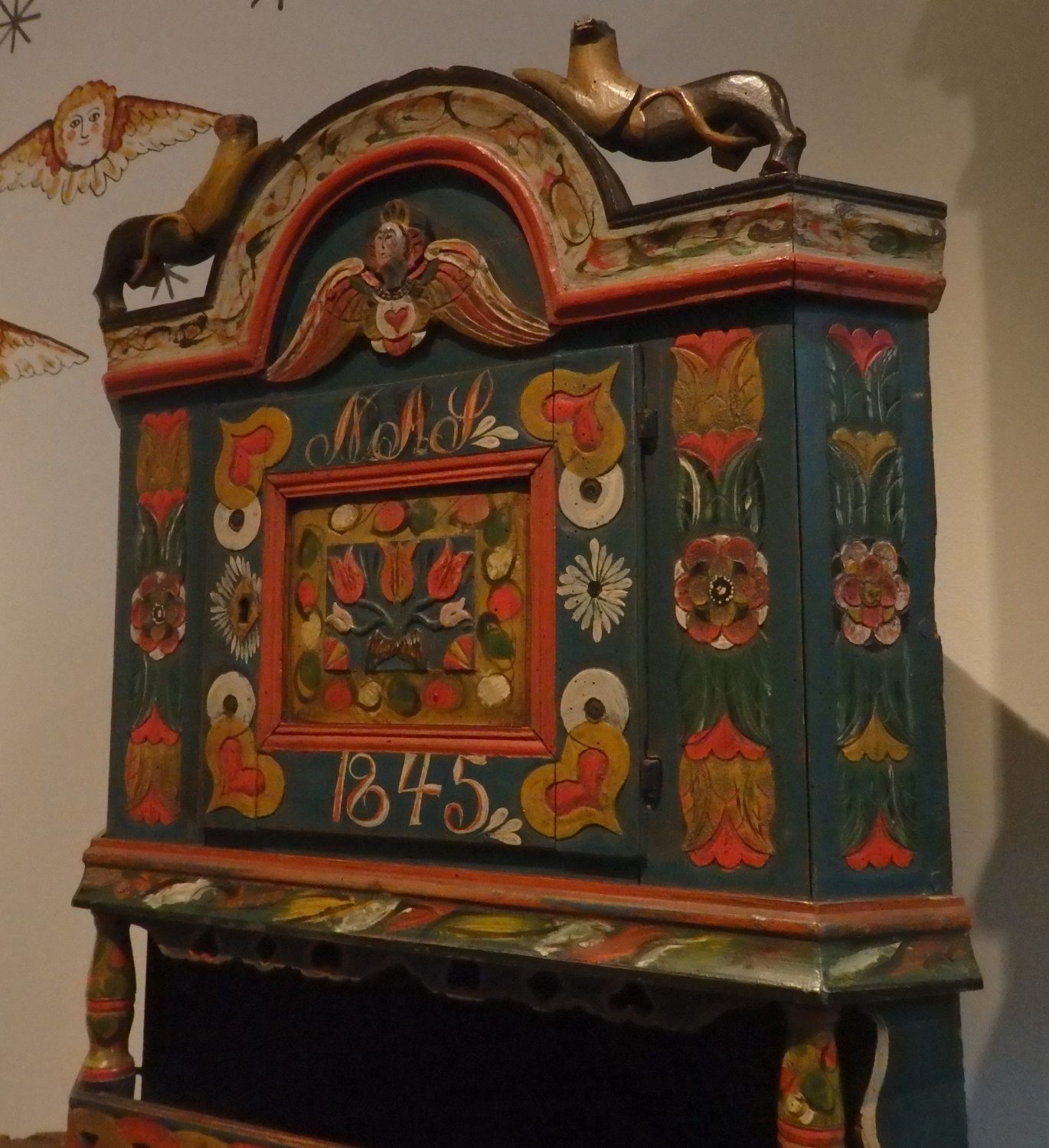 an example from the furniture collection at the Nordic Museum

I passed a number of other collections, and I don’t know how many more I missed in that enormous building. I saw dollhouses, from ornate to homemade; vintage toys; a collection of August Strindberg artifacts; jewelry; photography; and china. 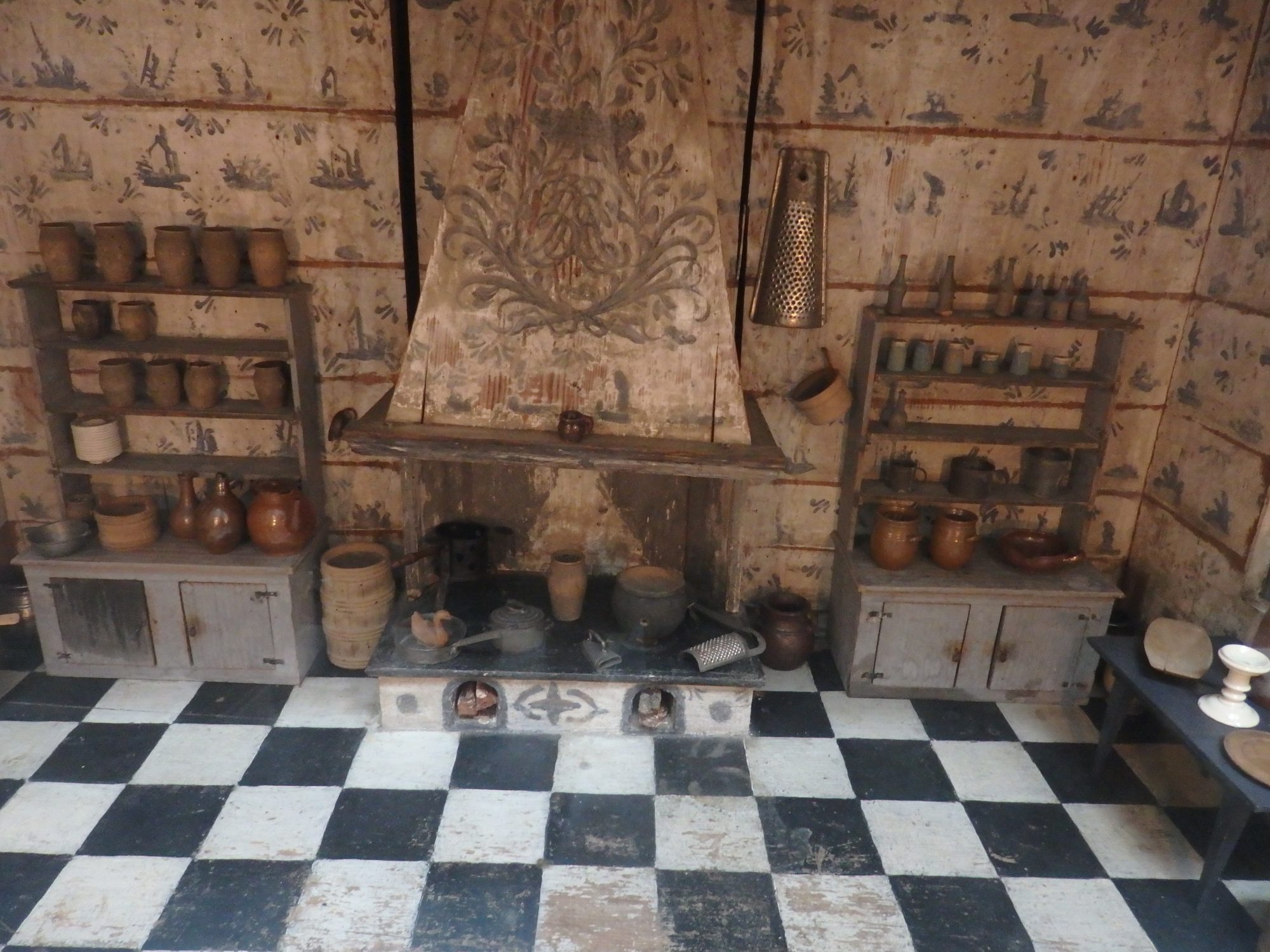 The kitchen from one of the dollhouses

My favorite section, I think, was a few rooms set up to show what 1940’s-era government housing looked like in Sweden. At the time, the Folkhammet, or Swedish Welfare State, was dedicated to moving poor families into better housing, with more space and indoor toilets. It built apartments like this one, taking many families on their first step out of poverty. 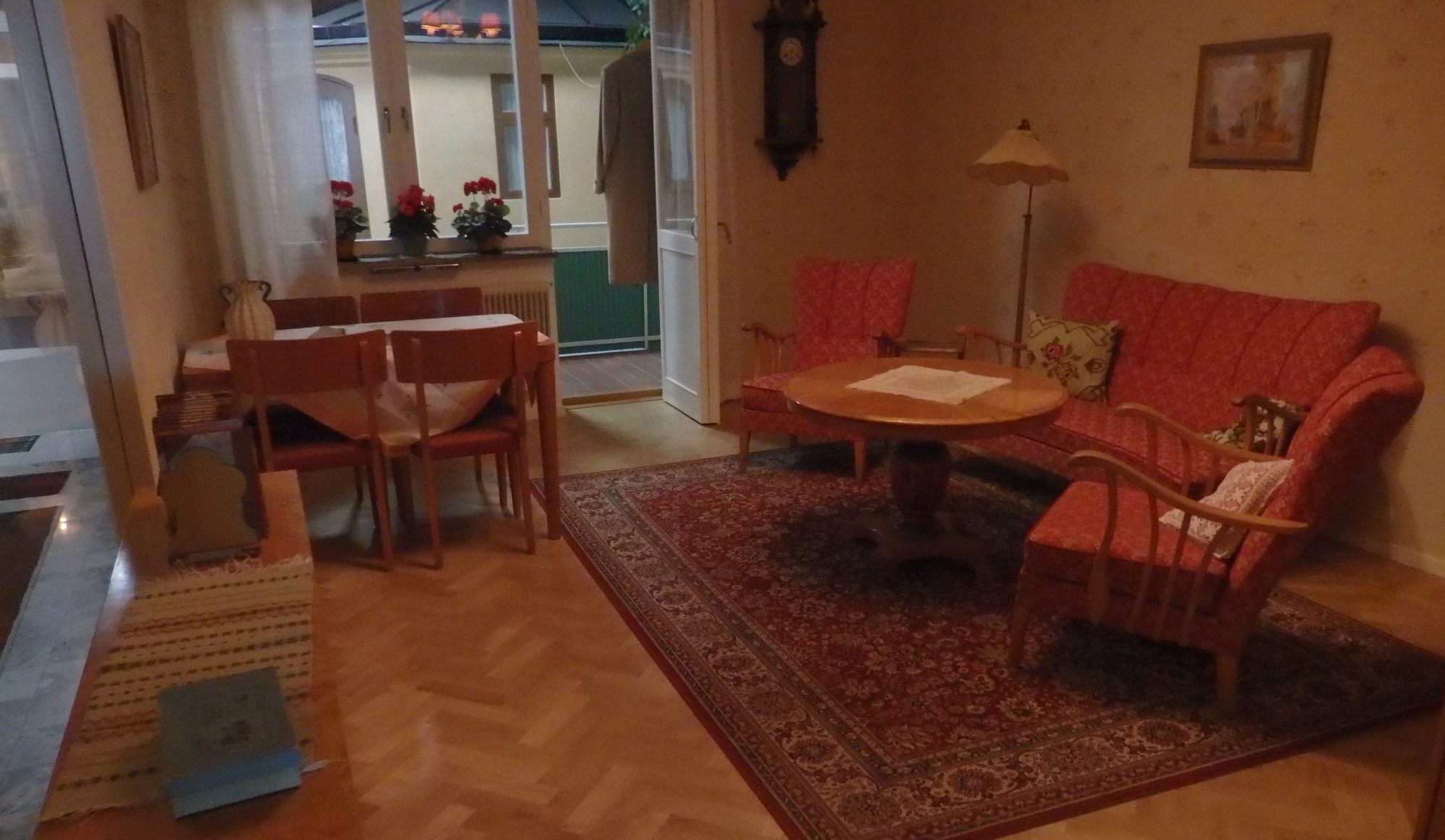 As part of the Visit Sörmland fam tour I participated in, I also visited Julita Manor, which belongs to the Nordic Museum. You could call it a further collection, but this time a collection of buildings. 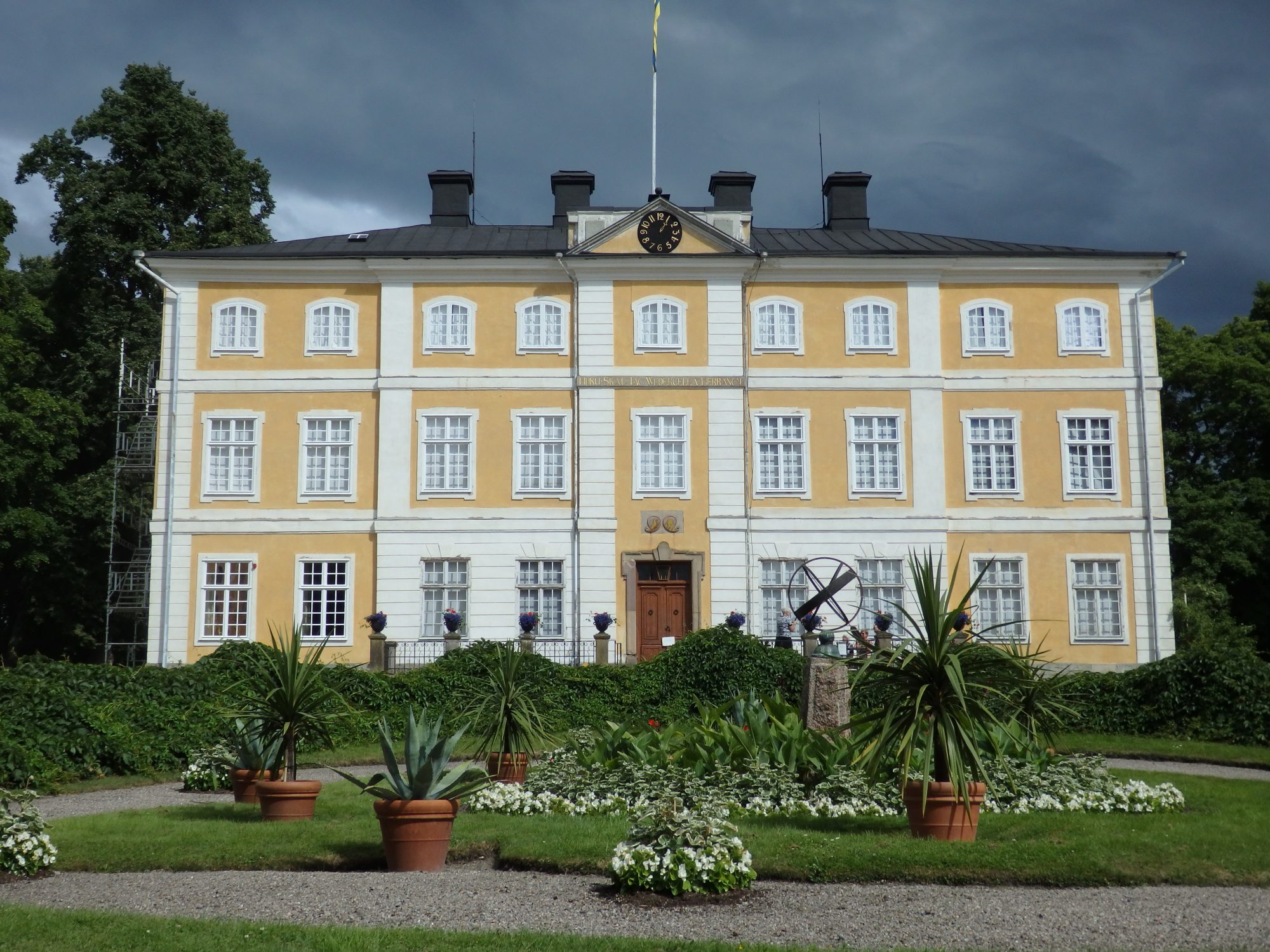 The last owner of the manor lived there until 1941, then donated the whole thing to the Nordic Museum. Since then, it has become an extensive open-air museum, demonstrating life on a country farm at the turn of the 20th century.

Julita includes two sets of buildings: the original farm buildings (painted yellow), and additional ones moved to the estate from other parts of Sweden (red). 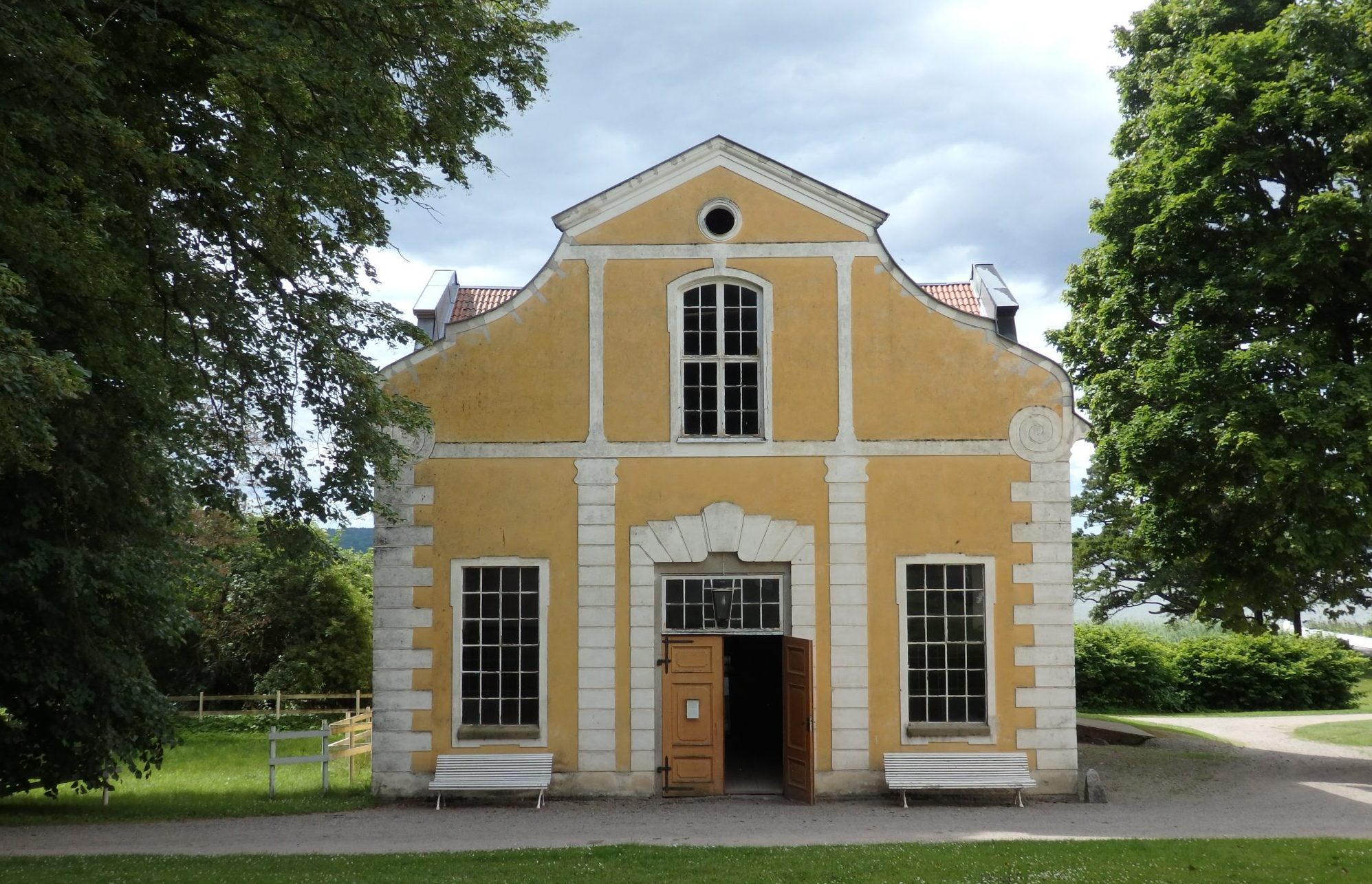 One of the original buildings at Julita estate

The original buildings include the dairy, the carriage house, the stable block, and so forth: all set up to show how the inhabitants conducted the business of the estate a hundred years ago. The manor house itself is also open to visitors. 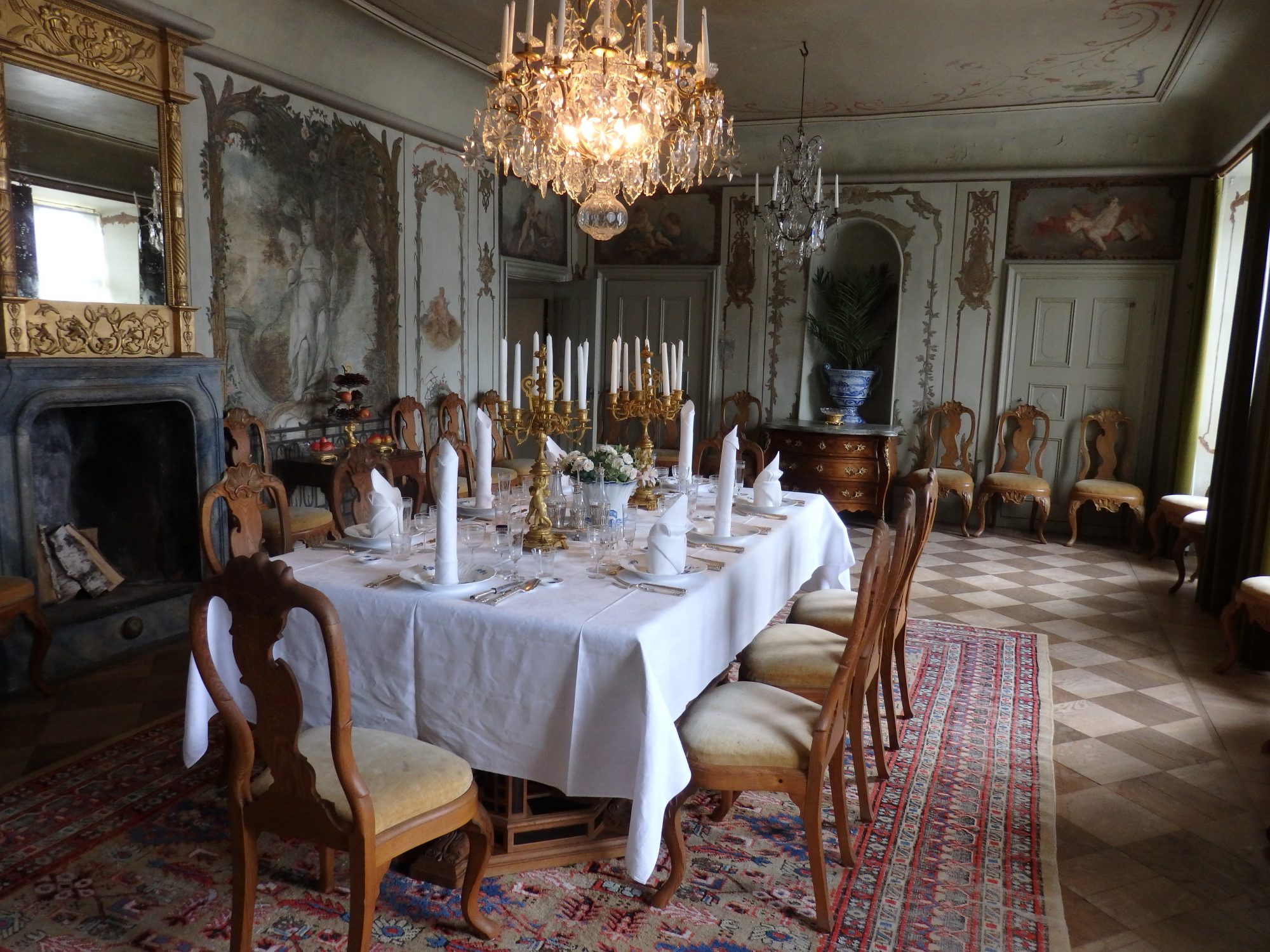 one of the many fully-furnished rooms of the manor house

The added buildings are mostly small barns and cottages. According to our guide, their decoration conforms to an early 20th century view of what a cottage should look like. In other words, the insides of peasants’ cottages were not in reality nearly so cozy and prettily decorated. 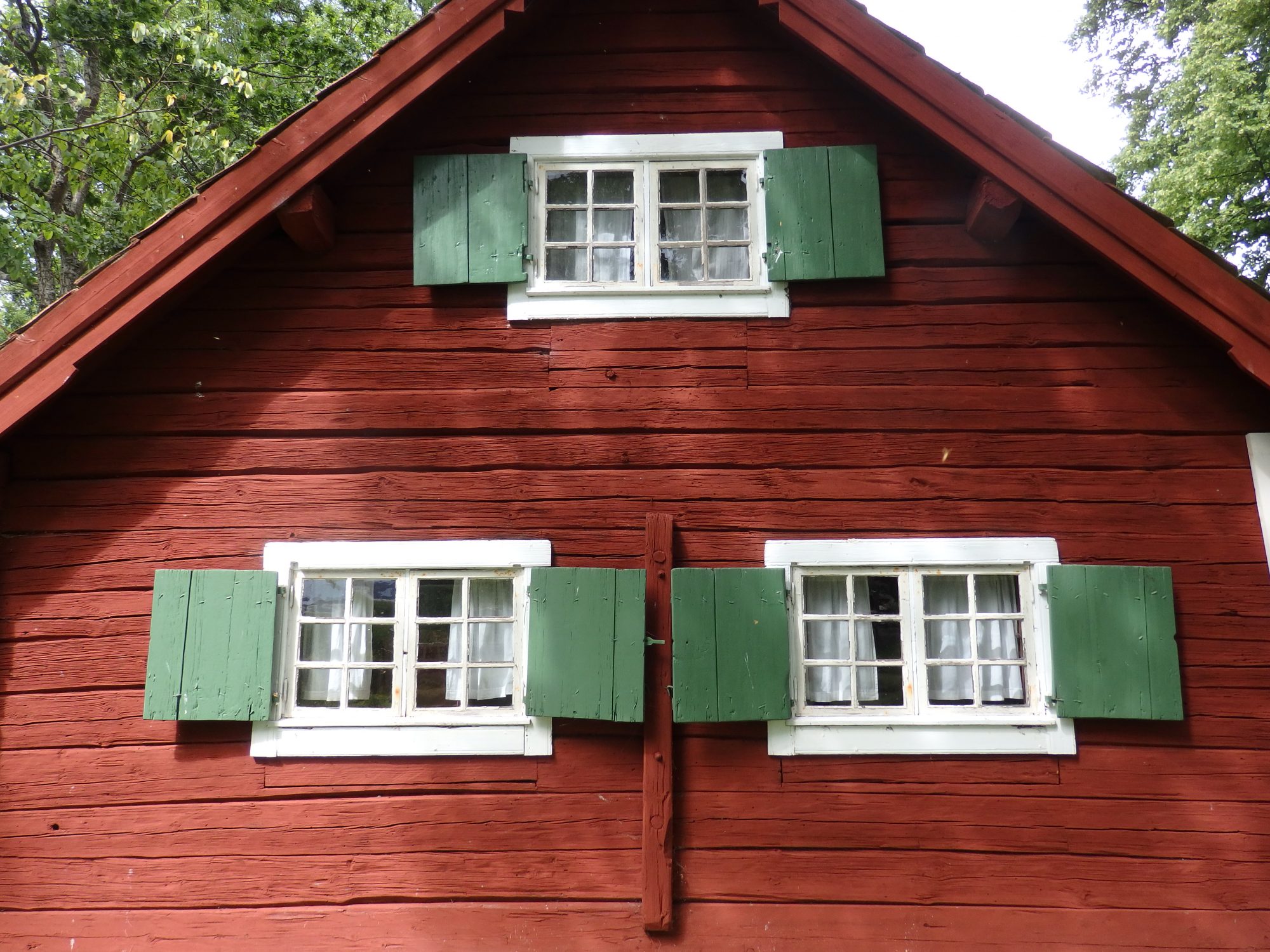 one of the historical buildings added to the Julita estate

At Julita, you can follow themed “trails.” For example, you can learn about the lives of housemaids and lords or farmworkers and crofters. Another trail shows you what remains of the buildings that preceded the manor: Julita Abbey, a medieval Cisternian monastery.

If your interests are more agricultural, a trail takes you through the historical gardens of the manor. The orchard is part of Sweden’s gene bank, helping to preserve fruit varieties. The estate covers 2200 hectares, so there is more to explore beyond the trail.

Each trail takes about 45 minutes, so it would be easy to do several or all. 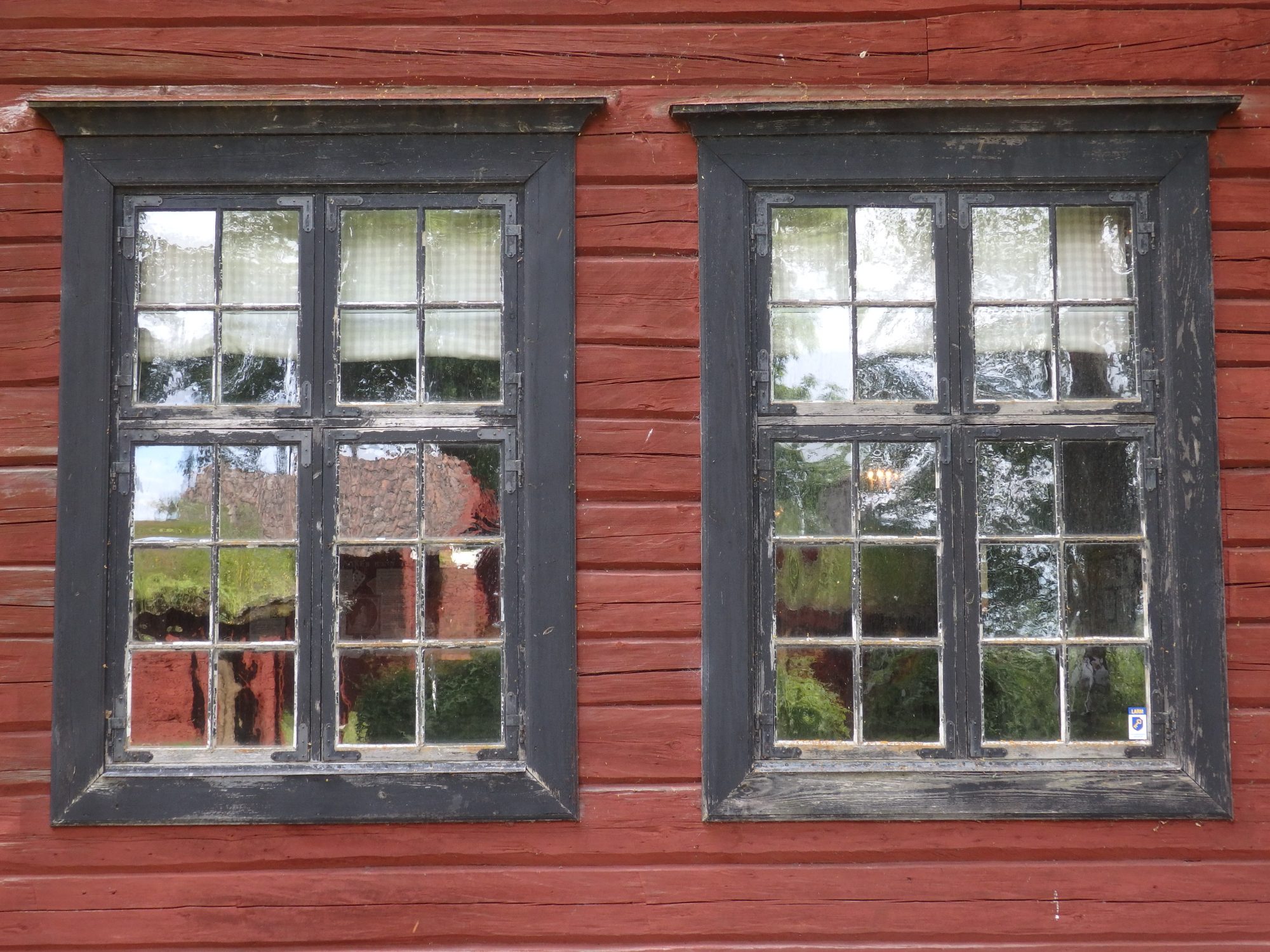 Julita Manor is about 25 km from Katrineholm, which means it would not be possible as a day trip from Stockholm. But as you can see from my posts about Sörmland (Gripsholm Castle and Sparreholms Manor, so far), there is plenty to see in this region south and west of Stockholm, so I’d recommend staying at least a few days. I’ll be adding more from Sweden in the next few weeks.

Disclosure: As I mentioned above, I visited Julita Manor as part of a fam trip organized by Visit Sörmland and Visit Sweden, so my admission was paid for. I visited the Nordic Museum for free as well, using the Stockholm Pass I received from Visit Sweden. Nevertheless, all opinions are my own.