It surprised me that the lovely town of Mariefred is only about 40 kilometers east of Stockholm, Sweden. It seems much further because it is so different. 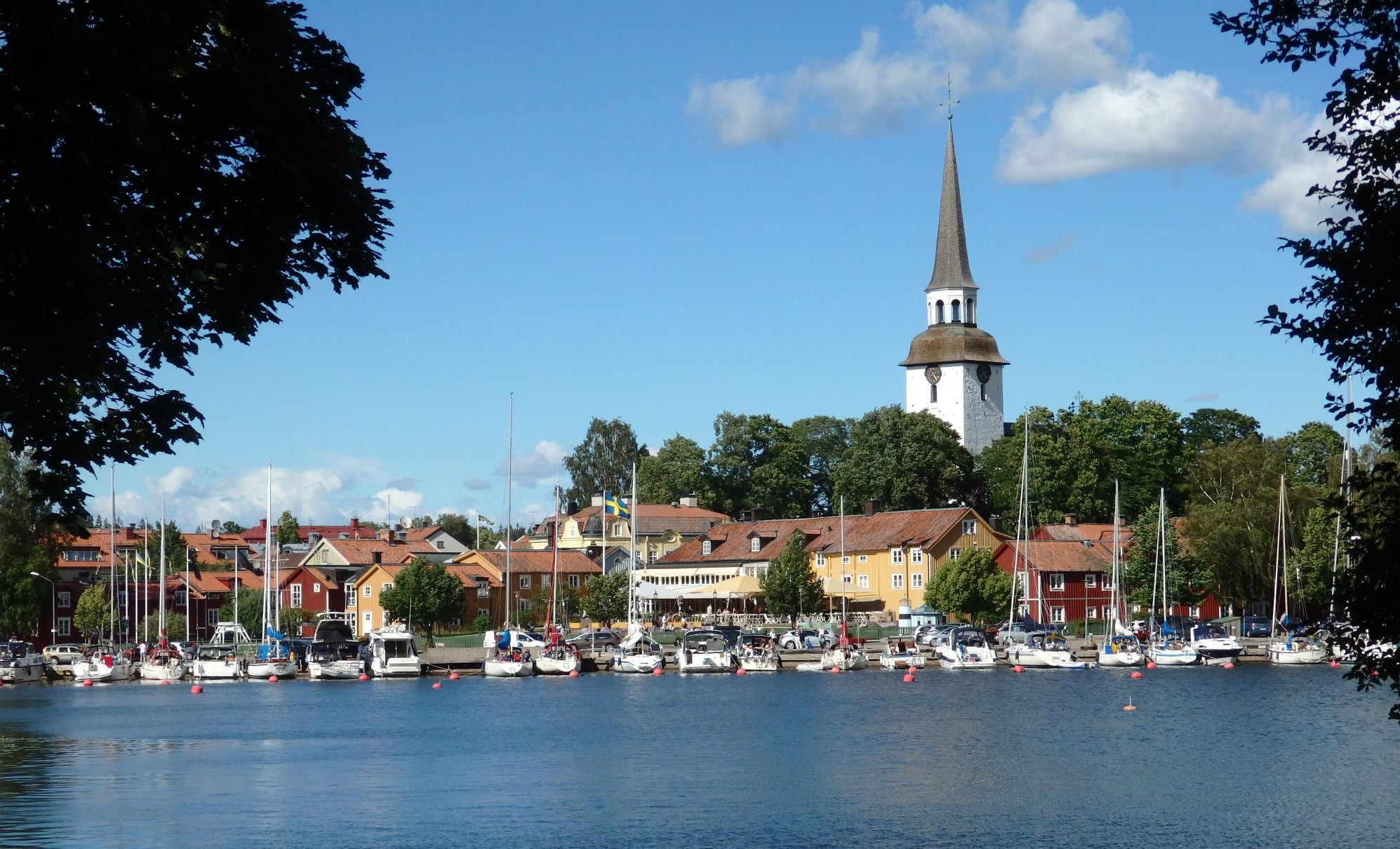 “Only” 40 kilometers is a bit misleading, however, given that most of what lies in between is water and islands. Traveling there by road, as I did recently on a familiarization tour offered by Visit Sörmland, is a much longer proposition.

If that doesn’t appeal to you, try taking the s/s Mariefred, a vintage coal-fired steamship that plies the waters of Lake Mälaren on the 3 1/2 hour trip between Stockholm and Mariefred in the summer months.

When I say that Mariefred is “so different” from Stockholm, I mean it has a charming, small-town feel. And a castle: a beautiful, royal palace of a castle. 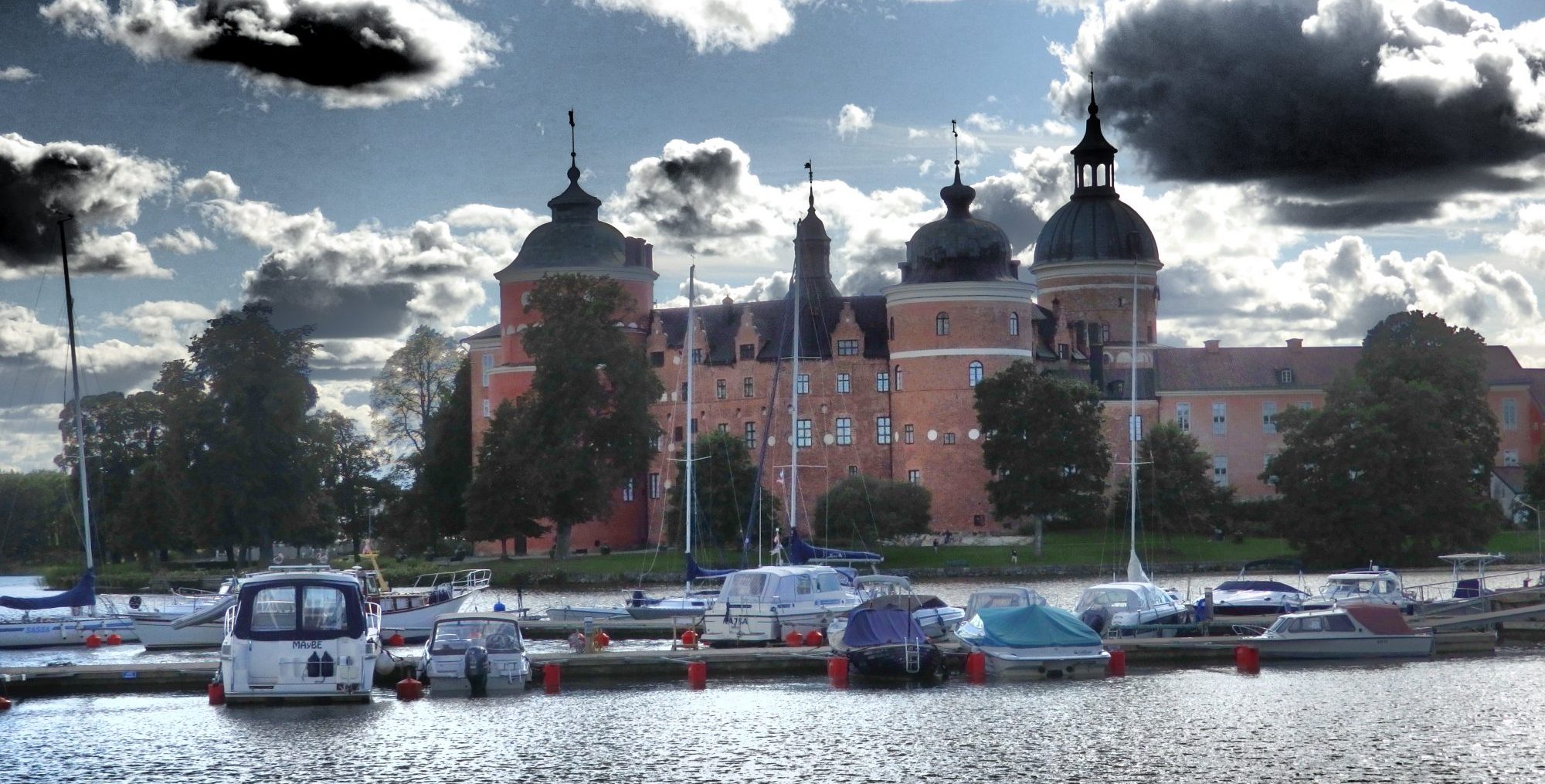 Built in the 1500s by King Gustav Vasa (as in the ship, the Vasa, that I told about in an earlier post), Gripsholm was the site of royal visits and all sorts of intrigue. If you visit, make sure to take a guided tour to hear about Swedish royalty. It’s very entertaining. 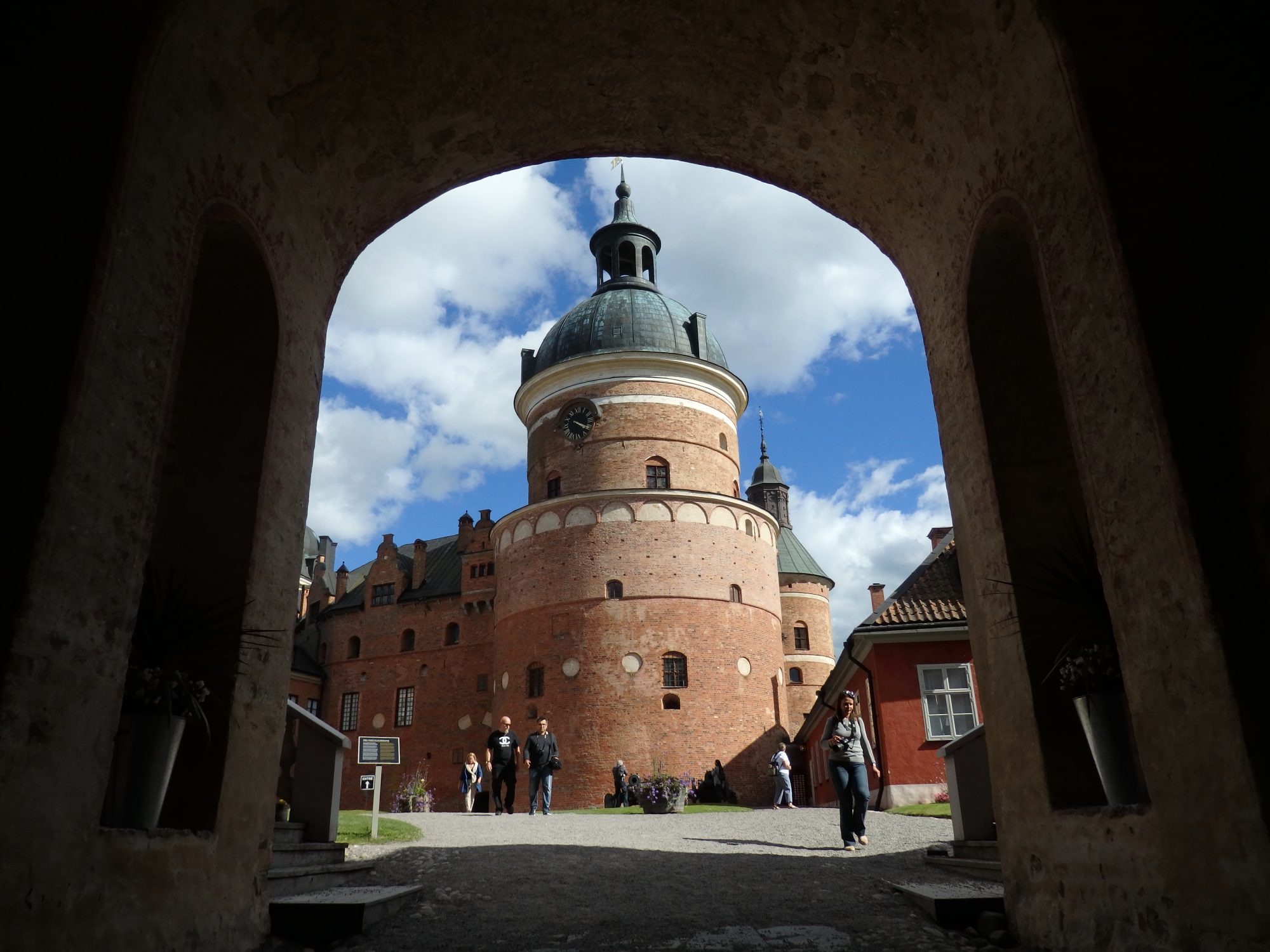 inside the entrance to Gripsholm Castle

Some of the interiors, dating from the 1500s, are remarkably well-preserved. The paintings on the walls and ceilings are intricate and colorful and must have helped cheer the occupants during the long nights of a Swedish winter. 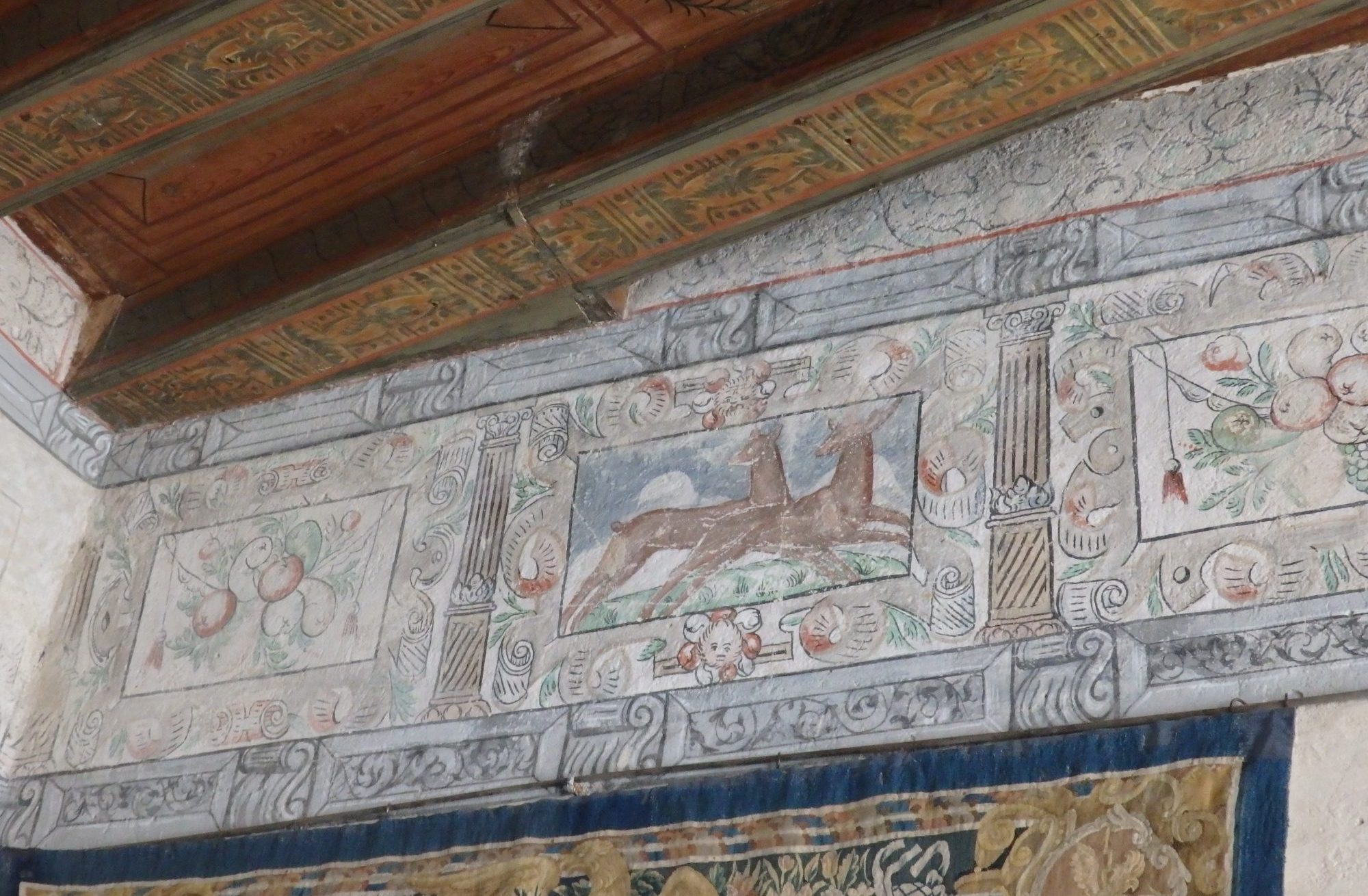 Gripsholm castle also houses Sweden’s National Portrait Gallery, a collection of about 4500 portraits. This isn’t just about kings and queens either; it also includes other prominent Swedes. If you visit, look out for Astrid Lundgren, the author of the Pippi Longstocking books, and Greta Garbo.

Probably the most impressive room in Gripsholm is the theater, added by Gustav III in the late 1700s. I’ve seen theaters like this in films, but never imagined that any still existed. The painted set is still intact, as are the decorative elements around the seats and balconies. 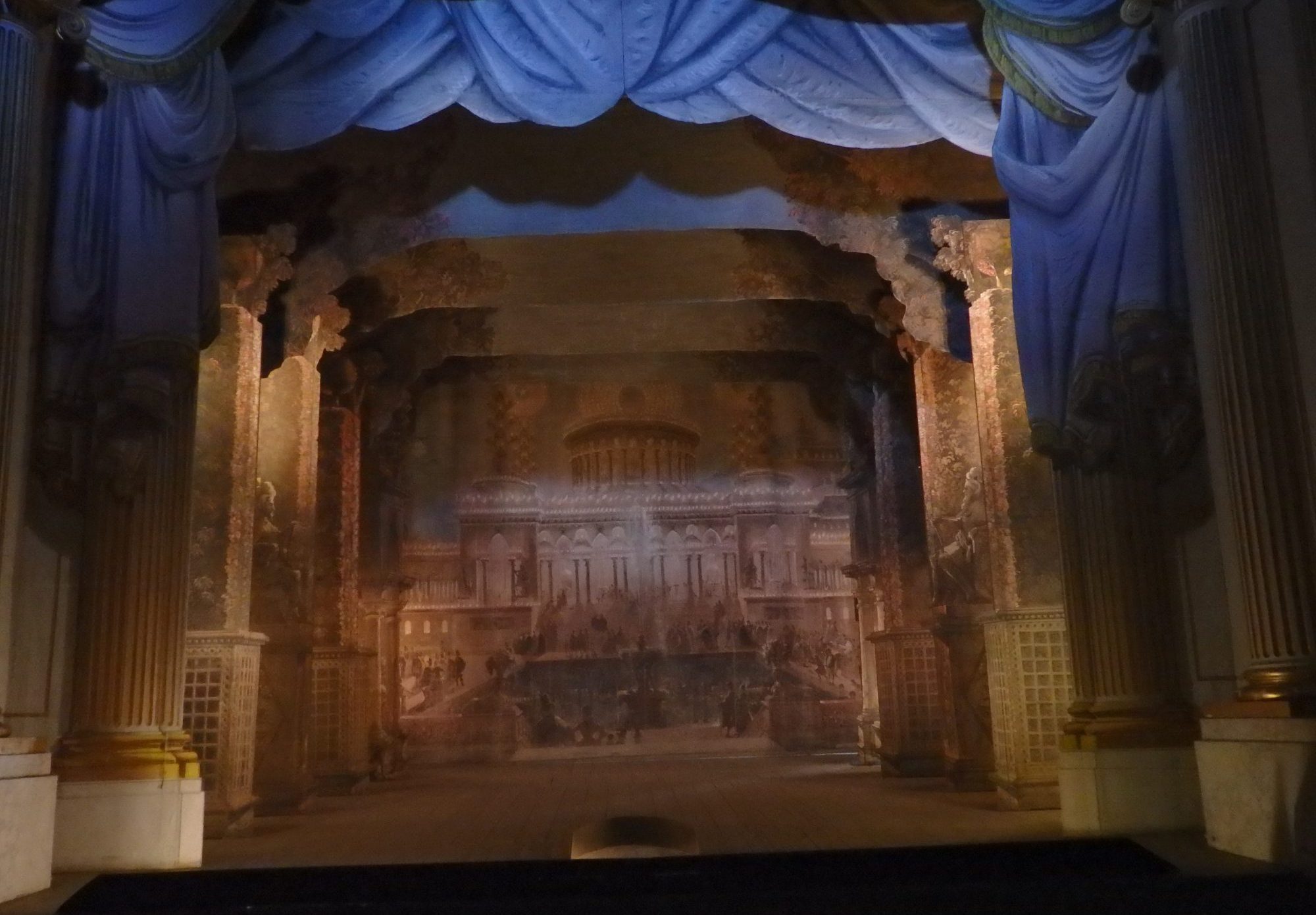 the theater in Gripsholm Castle

I could imagine those men and women of the royal court, in their ornate frocks and jewels, being entertained by tableaux vivants on this dramatically-lit stage (lots of candles, probably backed by mirrors).

Make sure to take a walk around the castle too to see it from all angles. Over the water, you’ll spot an impressive manor that must have an amazing view. 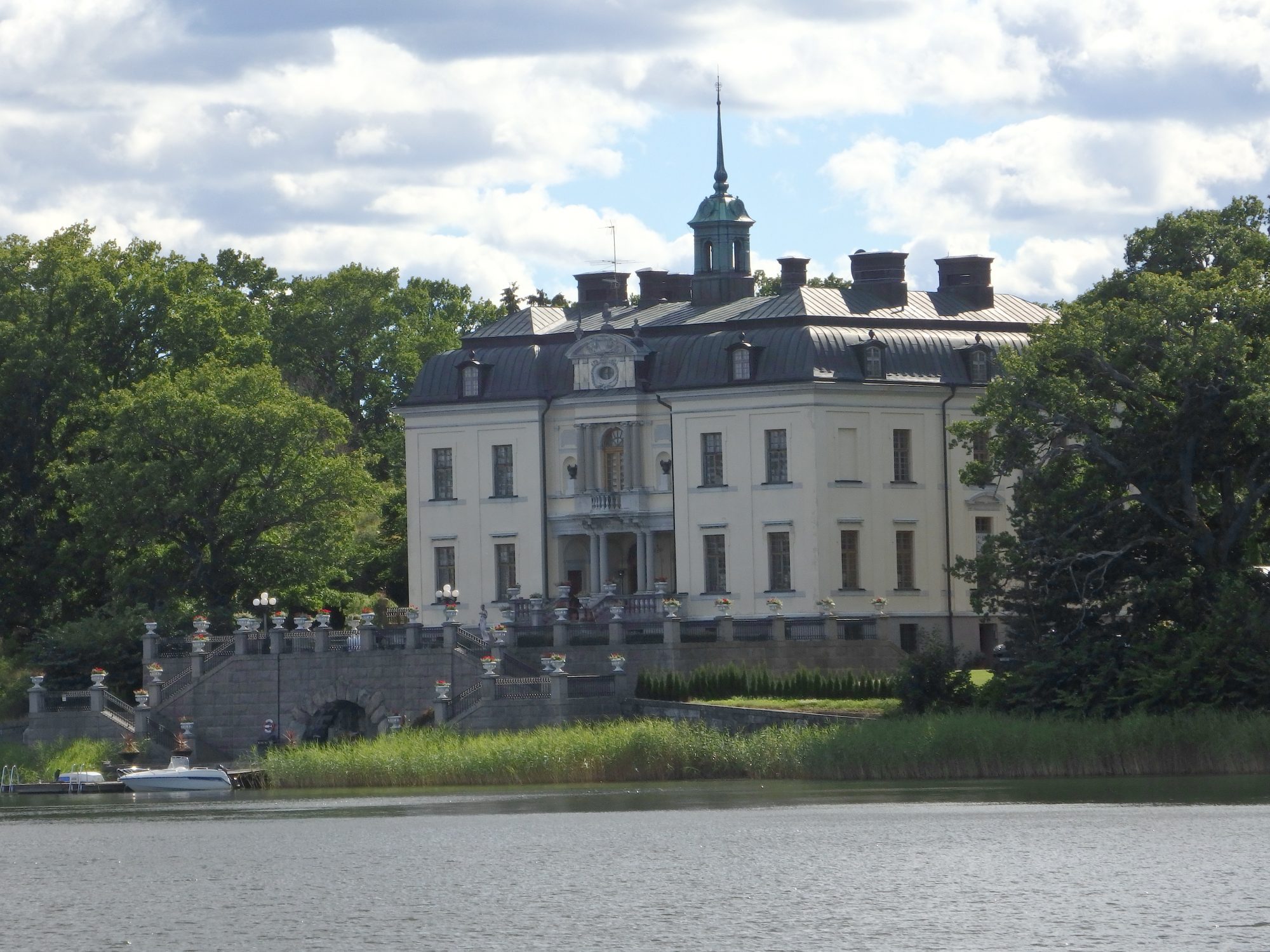 the manor house across from Gripsholm castle

Mariefred itself is also worth exploring. The architecture along the narrow streets ranges from traditional red Swedish houses to art nouveau. Take a walk up to the church that dominates the hill. I didn’t get to see the inside, but the view is worth the short climb. 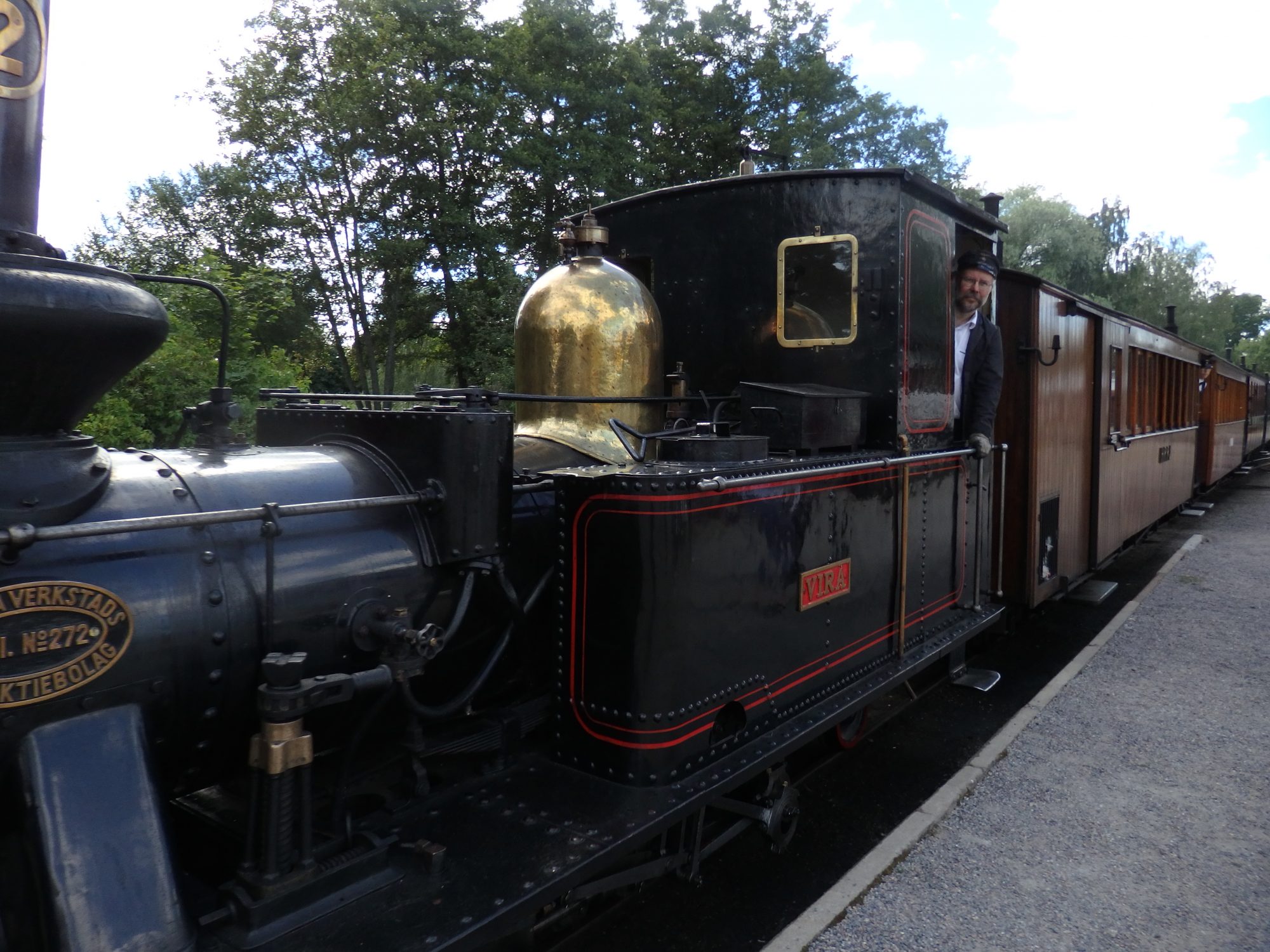 the steam train arriving in Mariefred

If the steamship isn’t enough for you, you can take a short trip on a vintage narrow-gauge steam railway in the summertime, leaving from a train station out of a storybook. 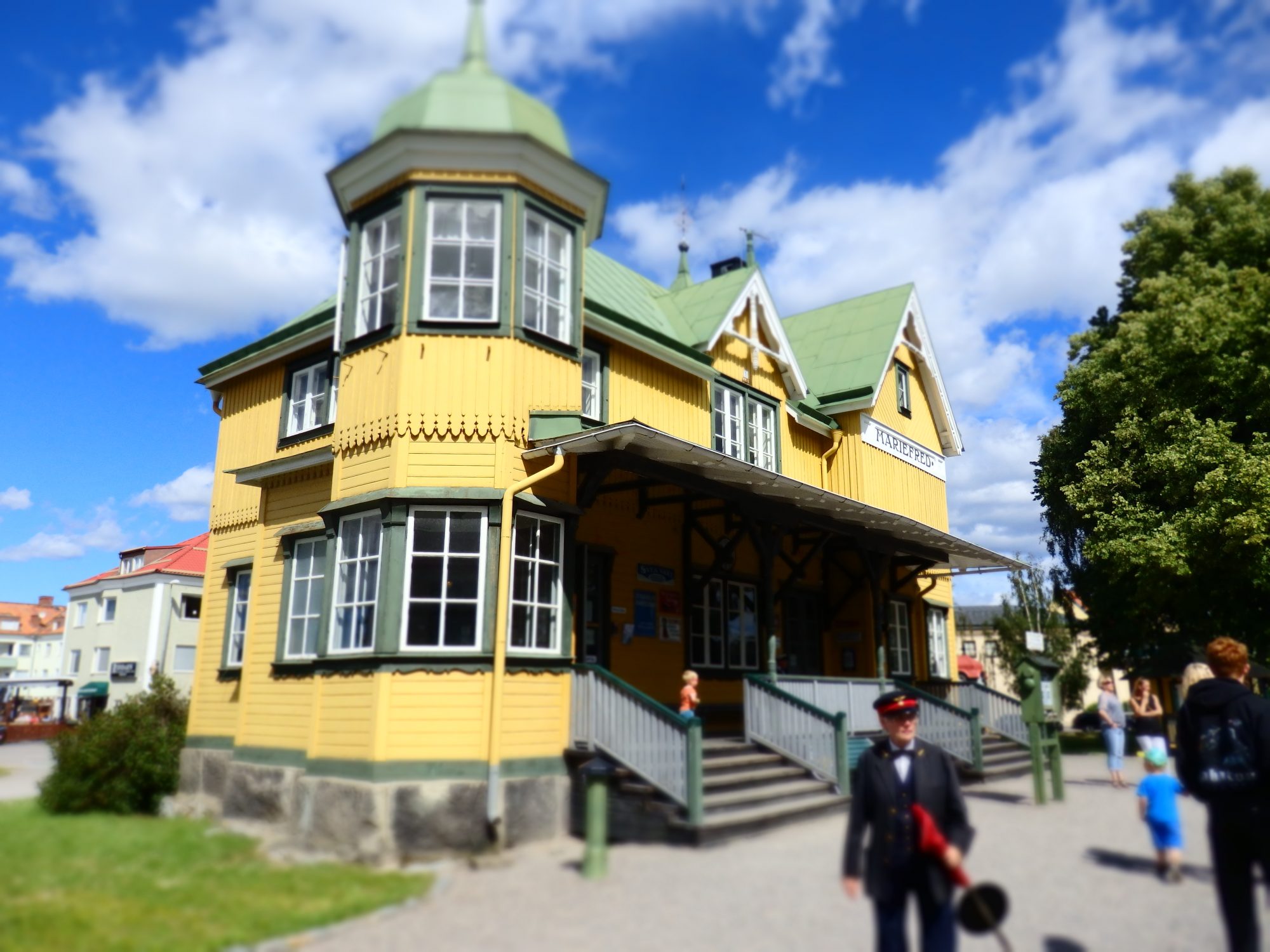 On our fam tour, we stayed and dined at Gripsholms Värdhus, which has been an inn since 1609, and where you walk out the front door to a view of Gripsholm castle. It’s been considerably modernized since 1609, but maintains a certain cozy charm, especially in the lobby areas, with their painted ceilings and comfy chairs. 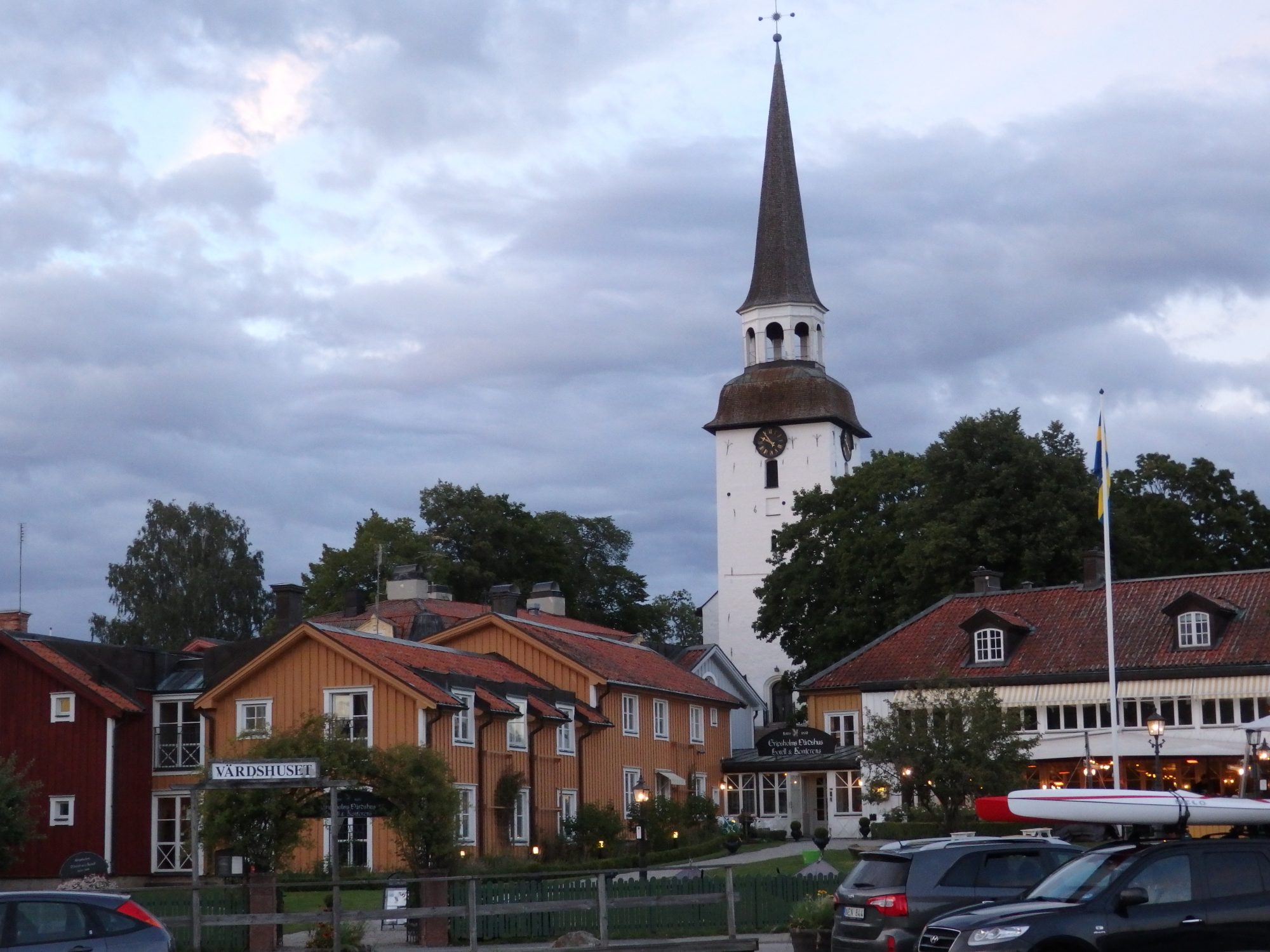 The hotel owners also run a nearby snack bar that mostly caters to the day trippers who arrive on the steam train. It’s called Gripsholmsgrillen and I mention it because a) their food is much cheaper than a restaurant and b) their sweet potato fries are fantastic!

I’d be remiss if I didn’t also mention the village of Strängnäs, about 12 kilometers away. It has a similar small-town charm to Mariefred, with traditional red-painted houses, a lakeside walk, and a windmill on a hill. Its church, sporting an absolutely massive tower, dates from 1290, and is worth a look inside. 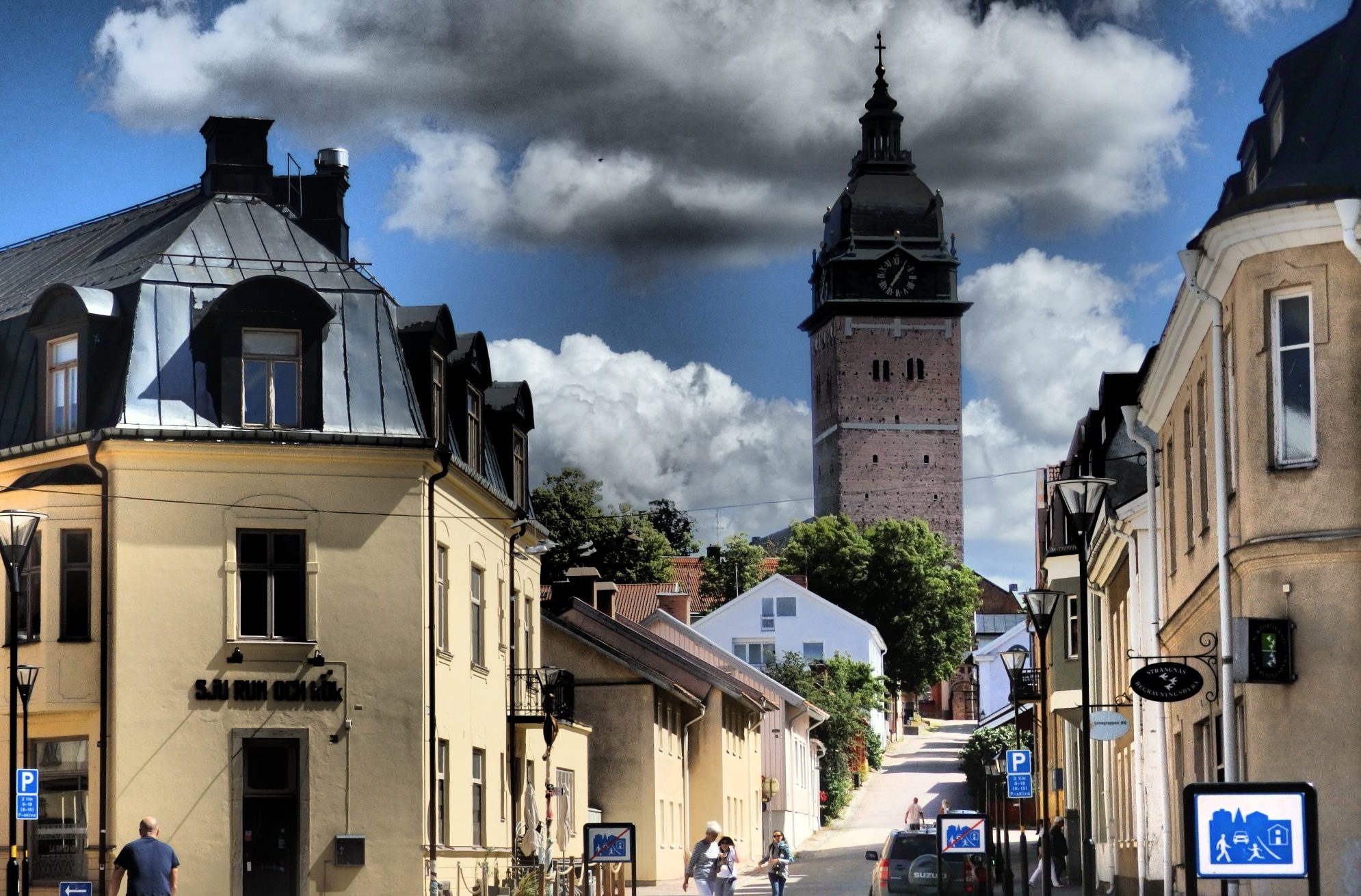 We saw considerably more on this fam tour. I’ve already posted about Sparreholms, with its over-the-top collections. I’ll post about more of the tour another time.

You can read more about the region of Sörmland on To Travel Too: Why You Should Visit Sweden’s Sörmland Region.

Disclosure: I visited Mariefred, Gripsholm Castle, and Strängnäs as part of a blogger fam tour provided by Visit Sörmland and Visit Sweden. I also stayed and ate at Gripsholms Värdhus as their guest. Nevertheless, all opinions are my own.

Have you been to Sweden? What part? What would you recommend seeing?