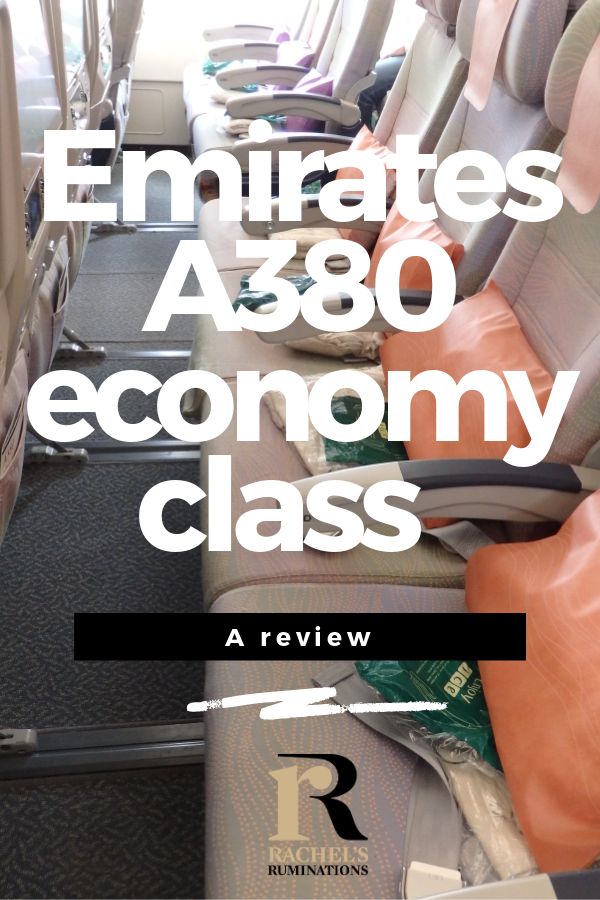 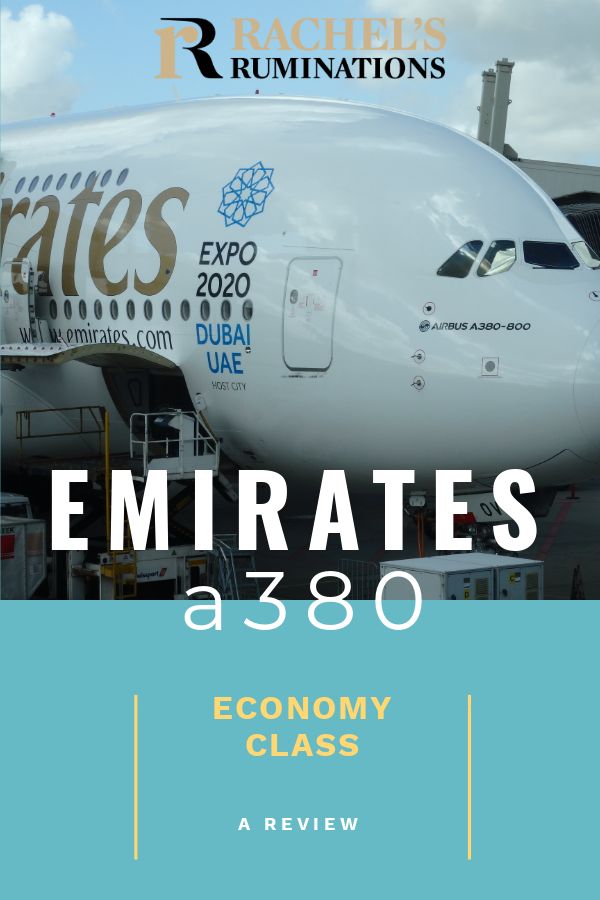 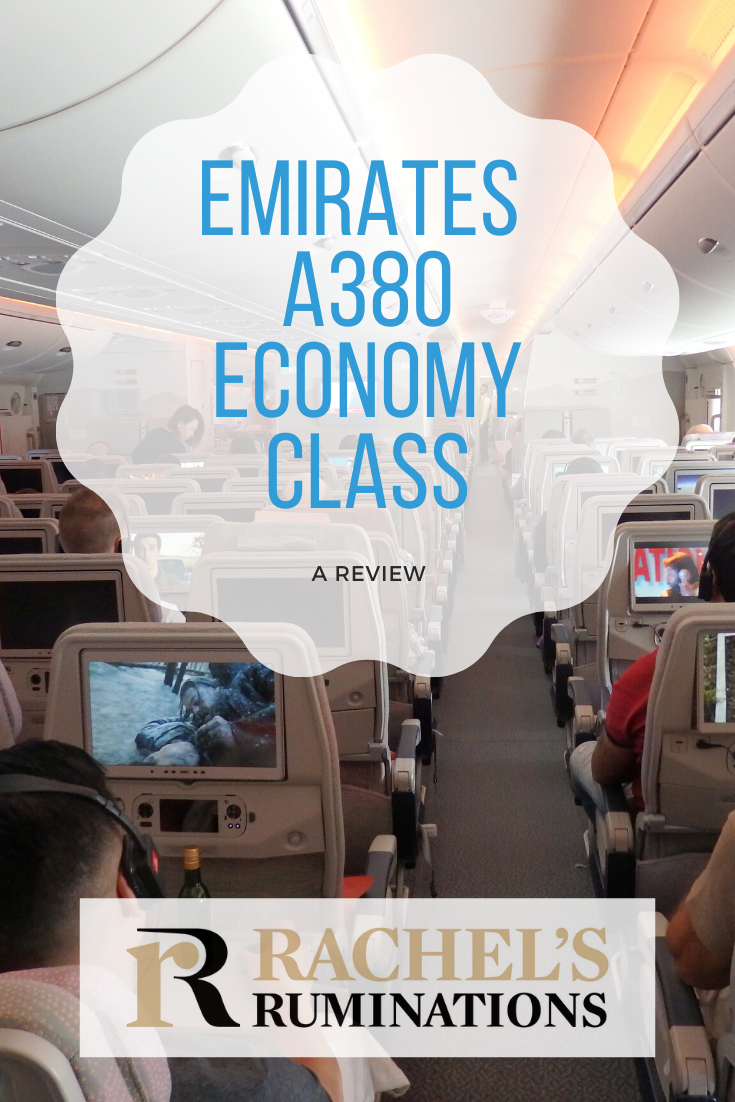 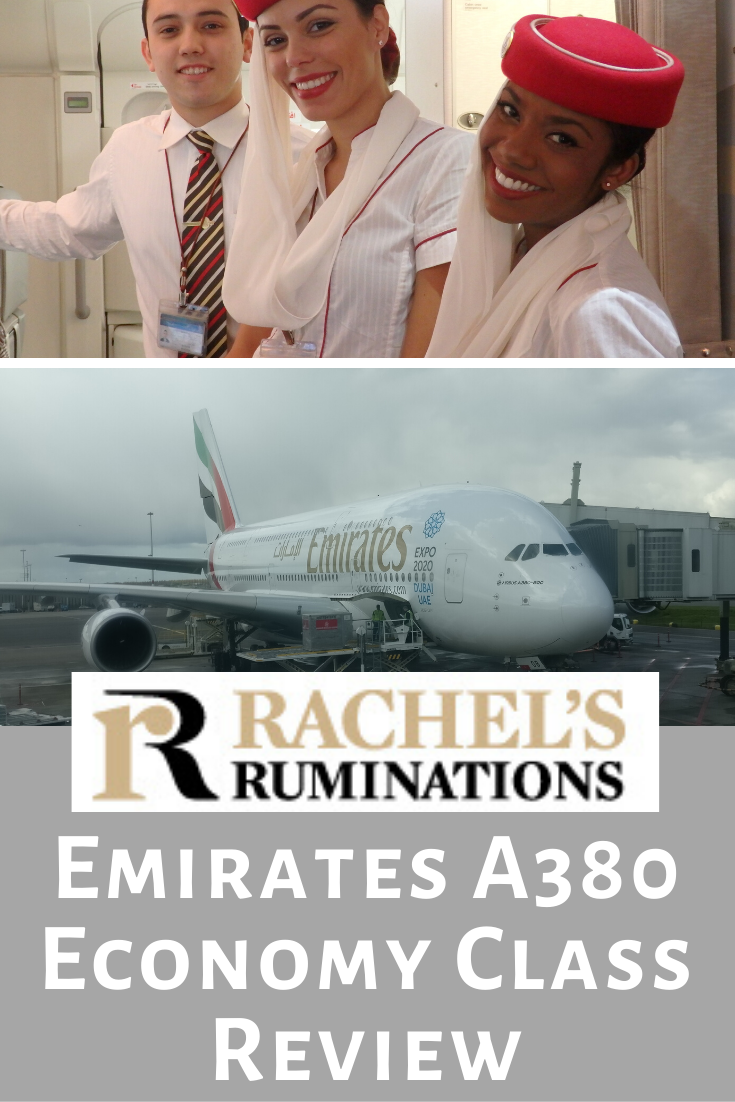 On my recent visit to Dubai on Emirates Airline, I was pleased to discover that I’d be flying on a plane I’d only seen from a distance before: the enormous Airbus A380.

The A380 is a behemoth of a plane. Like Boeing’s 747, it just doesn’t look like it should be able to get off the ground at all. It’s even bigger than the 747, and contains two decks that both run the length of the plane.

First and business class on Emirates’ A380

I, however, didn’t get anywhere near business or first class, both of which were upstairs while we mere mortals were downstairs. We even entered the plane through different jet bridges, so the upper classes wouldn’t have to rub shoulders with the hoi polloi.

My pleas to let me, as a travel blogger, take a few pictures upstairs (“Five minutes, tops!”), were denied since I should have arranged it ahead of time, so I can’t attest to how fancy it must be in business or first class. If you’re curious, click here to see Emirates’ own photos. I’ll wait.

Update April 2018: Since I wrote this, I’ve traveled the same route twice more, and still haven’t seen upstairs. Both times I wrote for permission ahead of time, but it was denied. The reason given was that they needed a short turn-around time. I’m skeptical.

What I can do is review Emirates’ A380 economy class. According to a very friendly flight attendant I consulted, the flight I flew had 427 economy seats, 76 business seats and 14 first class “suites” (another indication of the luxury of business and first classes: 90 people on only slightly less floor space than 427). The configuration of the economy seats was three-four-three in most rows.

Overall, I was very pleasantly surprised at Emirates A380 economy class. The seat pitch, for example, was adequate; my knees didn’t press up against the seat in front of me. I could cross my legs, and when I wanted to stretch my legs out straight, I was able to do so under the seat in front of me. On many airlines that isn’t possible since my knees would hit the seat back if I tried. And speaking of room, the overhead compartments had ample space for our carry-on bags, for a change.

Update April 2018: I flew twice to Dubai in the last month. I took KLM on the first round-trip, and it compared negatively to the second round-trip, which was, again, this Emirates A380. In the KLM economy class, I had similar leg room, but the seat was an inch or so narrower. I could feel the difference.

Hundreds of movies and TV shows, as well as music and games, are available on demand on the seat-back screens, and I appreciated that we could start a film even before we took off, though announcements from the pilots or flight attendants would pause the film from time to time. Headphones were provided as well. This was also true on the KLM flights.

Besides the options on the screen, the whole plane had WiFi, and it was free. I was able to have a conversation with a friend on Facebook messenger with no problem at all. On my flight in April 2018, there was again WiFi, but it was very slow, and I quickly gave up on it.

The seat back also had a very welcome usb charger port, and even a plug for a regular electrical cord. Unfortunately the format is British-style, which is what is used in Dubai, and only 110 watts.

Before we even took off, the flight attendants provided us with a hot washcloth, and we were offered another toward the end of the flight.

Soon after the washcloth, a flight attendant handed each of us a menu, listing what our meal choices were. The menu got my hopes up a bit, but the food was pretty typical airline food: edible but not particularly flavorful. I appreciated having metal utensils, rather than the usual plastic, and a small boxed snack that I could save for later.

April 2018: The service was similar on KLM, but without the extras like the hot washcloths or offering water or juice now and then throughout the flight, like Emirates did. The food on KLM was similarly plain.

Turbulence and the Emirates A380

If you’ve been reading this blog for a while, you’ll know that I battle with fear of flying. When I’m on a Boeing 747, it always feels and sounds like a struggle to get such a tub of an airplane off the ground. The engines roar, and it takes a long period of acceleration before it finally, ponderously, lifts off the ground.

The A380 is different. It’s quiet, for one thing. Not perfectly quiet, of course; the usual background hum was still there, but it didn’t grab my attention the way it usually does. The takeoff seemed easy and was incredibly smooth; I could barely even tell we’d left the ground.

Both of my recent flights were extremely smooth. On the first one, on my way to Dubai, we passed through a period of minor turbulence and the pilot turned on the seatbelt sign. Nevertheless, I didn’t feel the sort of adrenaline-fueled panic that is my norm. It’s hard to explain, but it’s as if, rather than being shaken around by the turbulence, the plane just cut through it. The plane still shook, but much less and also less violently than I’ve experienced in other planes. It felt as if it had been cushioned, or a bit like how a boat deals with small swells  on a lake.

I don’t know for sure, but I suspect that my lack of adrenaline spikes didn’t really have to do with the turbulence but, rather, with the quiet. Normally, you hear all sorts of sounds during the flight, or at least you do if you’re a fearful flyer. The plane bumps and hums and whines. None of that would bother me if the sounds stayed constant, but, on most planes, they don’t. When the plane hits turbulence, the pilot might get permission to change altitude or go around a patch of clouds. Every adjustment to the wings and every acceleration or deceleration of the engine is audible to anyone suffering from a flying phobia.

Not on these flights, though: I did not detect a single external noise, except a grinding sound when the landing gear was raised and lowered. What a difference that makes!

Update April 2018: This was the biggest difference between the KLM flights and the Emirates flights: KLM flies the route in a shiny new 777-200. It has all the bells and whistles that the A380 has, like fancy lighting that’s supposed to help you adjust to the new time zone. However, it doesn’t smooth out the turbulence as well as the A380. I could hear engine noise changes that I didn’t want to hear.

I chose to fly Emirates based on convenience and timing, not in order to experience Emirates or because of this particular plane. As a matter of fact, I was looking for a flight where I could get air miles, so I would have preferred KLM or one of its partners. Nevertheless, these two flights were thoroughly successful for me, which, believe me, is an achievement.

At the same time, I’d be curious to try Emirates economy class again but on a different plane. I’d want to see if, for example, the seat pitch is just as good, or if it’s more like most other airlines. Or, alternatively, to fly on an A380 again, but operated by another airline.

In other words, I can’t tell if my positive experience is because of Emirates or because of the A380. If I try one or the other alternative in future, I’ll let you know.

Update April 2018: Judging from my two experiences traveling to Dubai recently on KLM and then on Emirates, I’d say it’s at least in part because of the A380.

If you liked this Emirates A380 economy class review, please share it on social media. The image below is perfect for pinning!