Shopping is A. Big. Deal. in Dubai. Whenever I asked people who live there what I should see and do, the answer usually included shopping.

(Disclosure: This article contains affiliate links. That means that if you click on the link and buy tickets, I will get a small commission.)

I am very much NOT a shopper. I enjoy shopping with friends, but that’s more about the friend than about the shopping. I just don’t have the patience for all of the trying on, taking off, trying on again. And the walking. And the schlepping shopping bags.

While the tourist map the concierge at my hotel handed to me listed 35 shopping centers and malls, the two most often mentioned were the Dubai Mall and the Mall of the Emirates. I visited both.

Not shopping in the Dubai Mall

Many visitors to Dubai go to the Burj Khalifa, at 828 meters, the tallest building in the world—though not for long since they’ve begun building another even taller one in Dubai. I didn’t visit it because I was horrified at the cost. In off-peak hours, just going to the 124th floor, about two-thirds of the way up, costs the equivalent of about €30. Going nearer the top, the 148th floor, costs more than €80 off-peak. I just couldn’t bring myself to spend that kind of money for an elevator ride and a big, hazy, desert view. (Note: I went on my next visit. You can read about it here.) 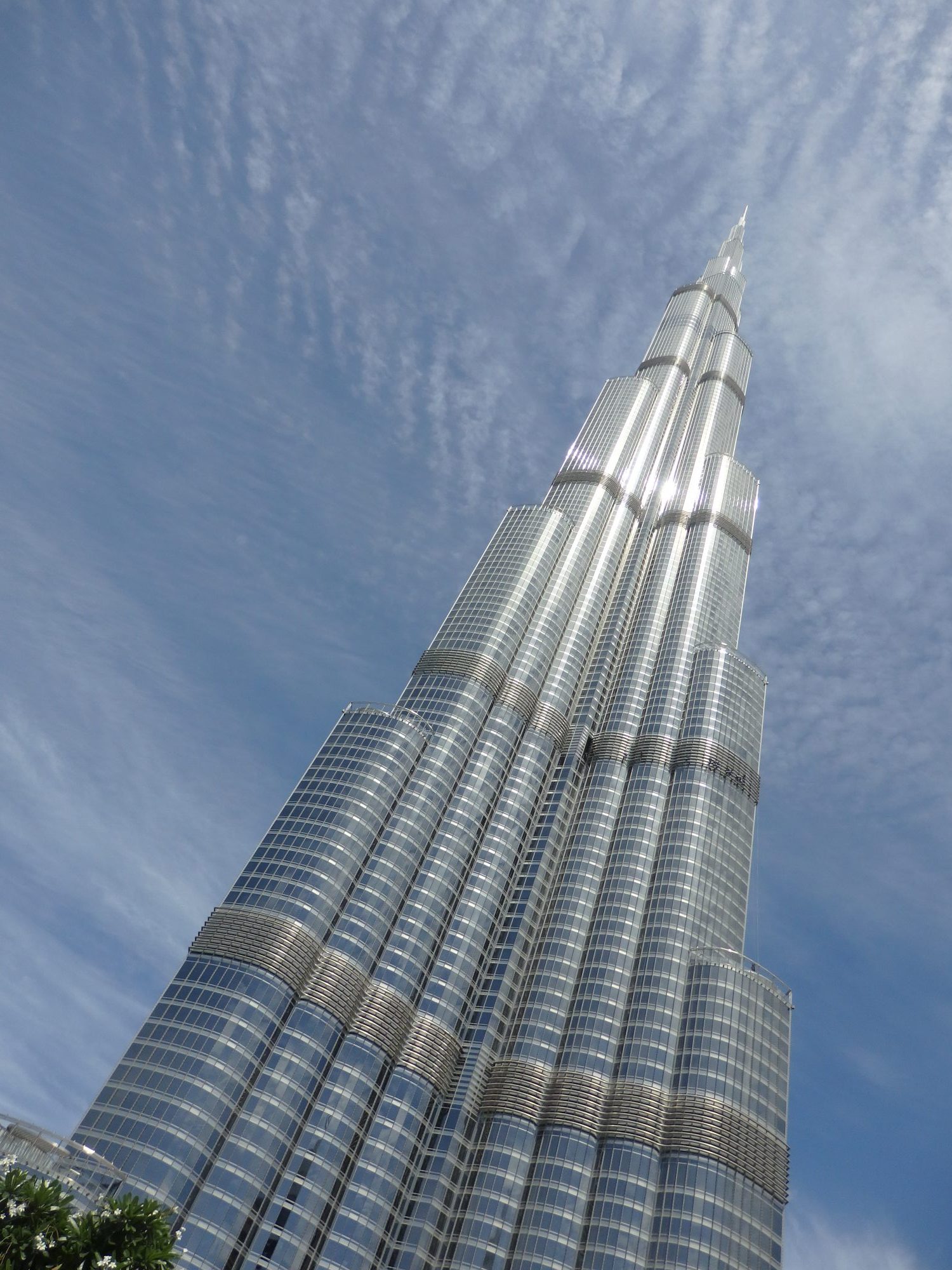 looking up at the Burj Khalifa in Dubai

To get to the Burj Khalifa, though, you have to walk through the Dubai Mall, so that’s how I ended up there. It’s a very long walk from the metro station just to the entrance of the mall: 1200 steps, according to my watch. Fortunately the walkway is closed in and air conditioned, as is pretty much everything in Dubai. Even if you don’t stop for shopping, it’ll take you a while to get to the entrance for visiting “At the Top.”

For lots more things to do in Dubai, read this post: One Day in Dubai: what to do?

This mall is new and shiny and light and clean, and contains an amazing array of stores: 1200 retail stores, plus 200 restaurants and cafés. It has a Diplodocus skeleton, an aquarium, an indoor theme park, an ice rink, cinemas, and on and on. 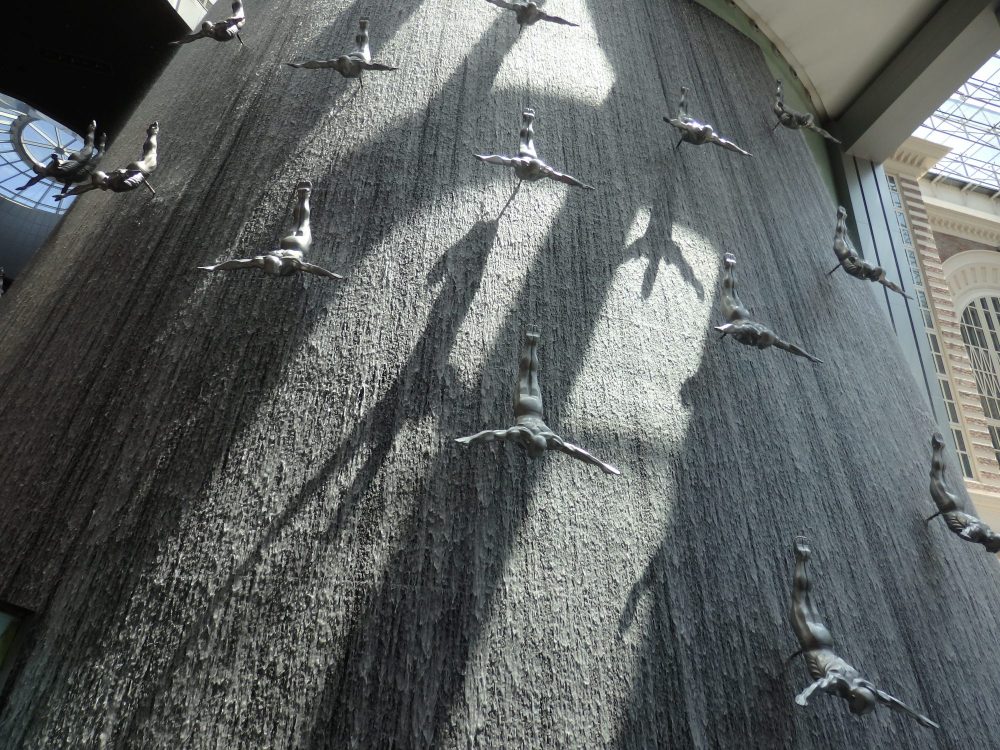 An indoor waterfall at Dubai Mall.

In other words, it’s completely over the top. Which matches the Burj Khalifa quite well.

The Mall of the Emirates

Calling itself “the world’s first shopping resort,” the Mall of the Emirates is older and, if possible, even more over-the top than the Dubai Mall. The décor is distinctly more ornate, especially in the main hall. The stores, though, are a similar range of top-end and top-price designers like Tiffany and Gucci.

It’s smaller, too, although with 560 stores and 90 cafés and restaurants, it doesn’t feel small. 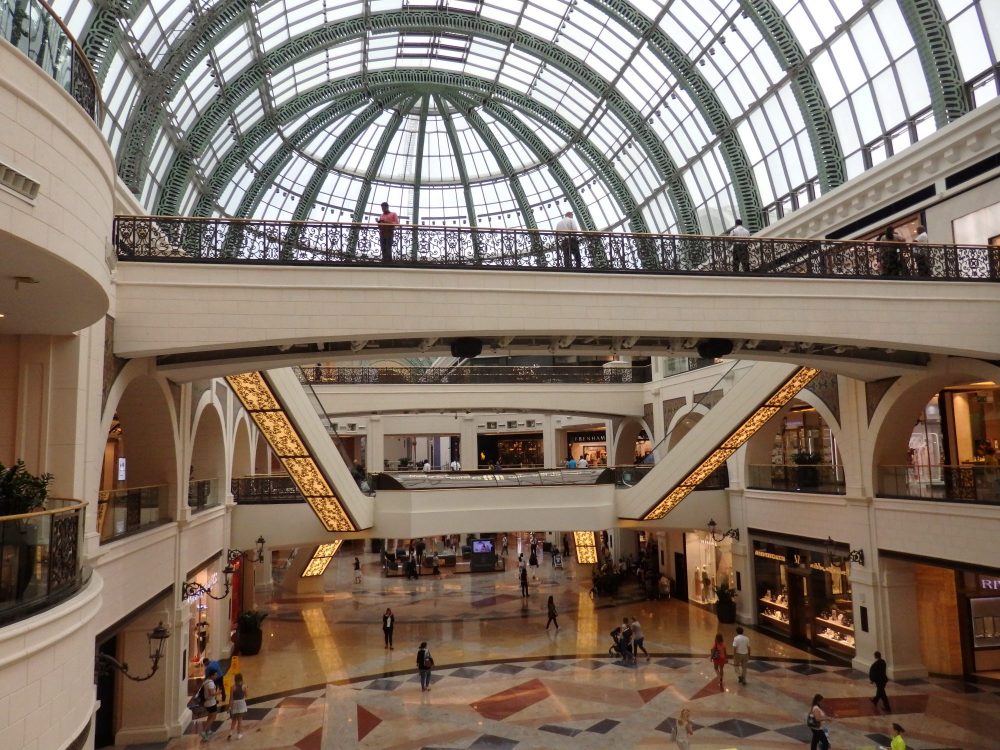 Half of the main atrium of the Mall of the Emirates

This mall is home to the famous indoor ski slope, Ski Dubai, which is why I went there: just to take a look. For about €50, you can ski for two hours, for €80 you can spend the whole day skiing.

Where it almost never rains, never mind ever seeing snow. 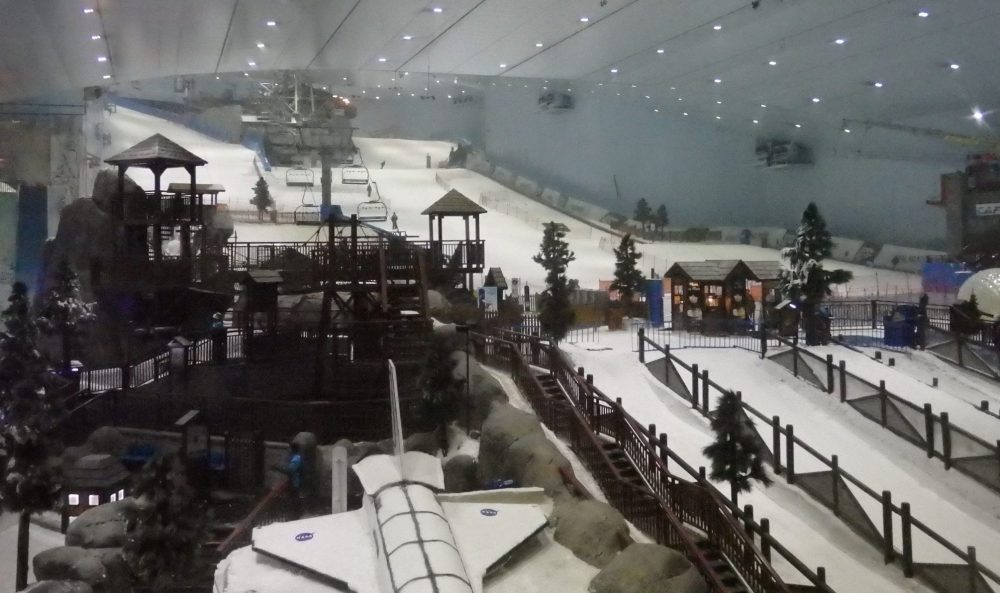 Ski Dubai, as seen through one of the observation windows. They wanted to charge me the non-skiing entrance fee (more than €60) to go inside. The area in the foreground is mostly for variations on sledding.

In the over-air-conditioned interior of the mall, however, it’s easy to forget how hot it is outside. In the summer, it often exceeds 40°C (104°F). How much energy must it take to keep this indoor ski slope refrigerated to -4°C  (25°F) year-round?

The clientele at both malls was more interesting to me than the shopping. The women shoppers ranged from extremely scantily-clad, carefully-made-up stick figures tottering on high heels, to women in an abaya (a long, loose black robe) and hijab (headscarf) and sometimes even a niqab (covering the face except for the eyes). Most of the men, no matter their national or ethnic background, wore western wear—a shirt and trousers—but a few wore simple, long, white caftans called dishdash with a traditional headscarf called a keffiyeh. 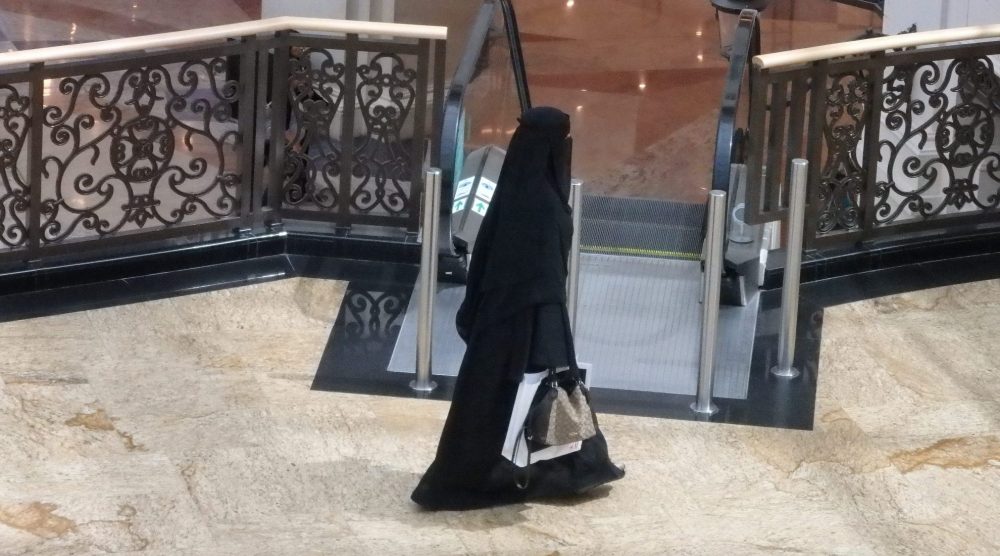 a woman shopping at the Mall of the Emirates

Dubai is a very multicultural place, and that description applies at both ends of the social scale. The manual laborers I saw—sweeping the subway station, for example, or keeping those mall floors impossibly shiny—mostly come from various countries in Asia and Africa. The wealthy shoppers in these malls also came from many different countries in Asia and Africa, but included white westerners from North America, Europe and Australia.

As for the shops, they were extremely chic: some were the kinds of stores with lots of empty minimalist-designed space and just a small rack or two of clothing. I noticed that only the lower-end stores—and I don’t mean cheap stores because there weren’t any—had any signs in them about sales. I guess if you can afford to shop at Chanel or Prada you aren’t particularly concerned about price.

Despite my hatred of shopping, though, I enjoyed my walk through these malls, especially the people-watching. Chances are, if you go to Dubai, you’ll end up in one or another mall whether you intend it or not. Don’t feel you need to buy anything; just enjoy the experience.