Budget airlines seek out secondary airports because the landing fees are lower. Skavsta airport, an hour outside of Stockholm, is one of these: both Ryanair and Wizz Air fly to Skavsta. Most visitors get on the express bus to Stockholm straight from their plane.

That is a mistake. While I had booked a cheap Ryanair flight back home from Skavsta, it hadn’t occurred to me to stop and see Sörmland, the region to the south of Stockholm. Fortunately, I took part in a fam trip after the TBEX conference that showed me the highlights of the area.

The easiest place to stay, Nyköping, is only seven kilometers away from the airport: a short local bus or taxi ride. 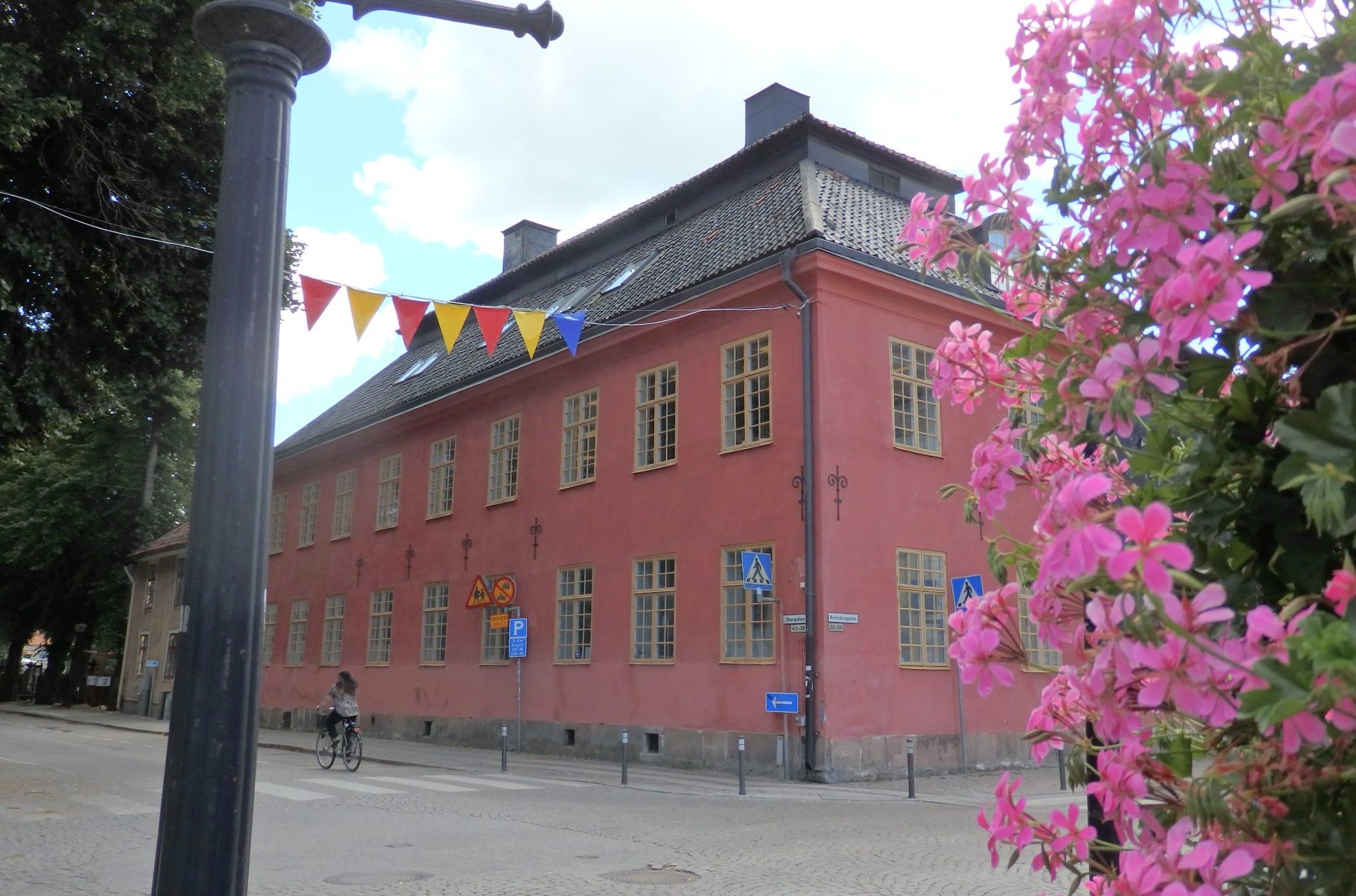 in the center of Nyköping

Nyköping (pronounced like “new-shipping”) bills itself as “a beautiful, cheerful and well-ordered town.” That describes it well. You won’t find any awe-inspiring sights here, but you will find pretty buildings, a charming town center, a tranquil harbor to stroll in, atmospheric repurposed factories, and some great food and comfortable hotels.

In the summer, at least, the river is postcard-worthy: flower boxes and lush greenery frame the views. 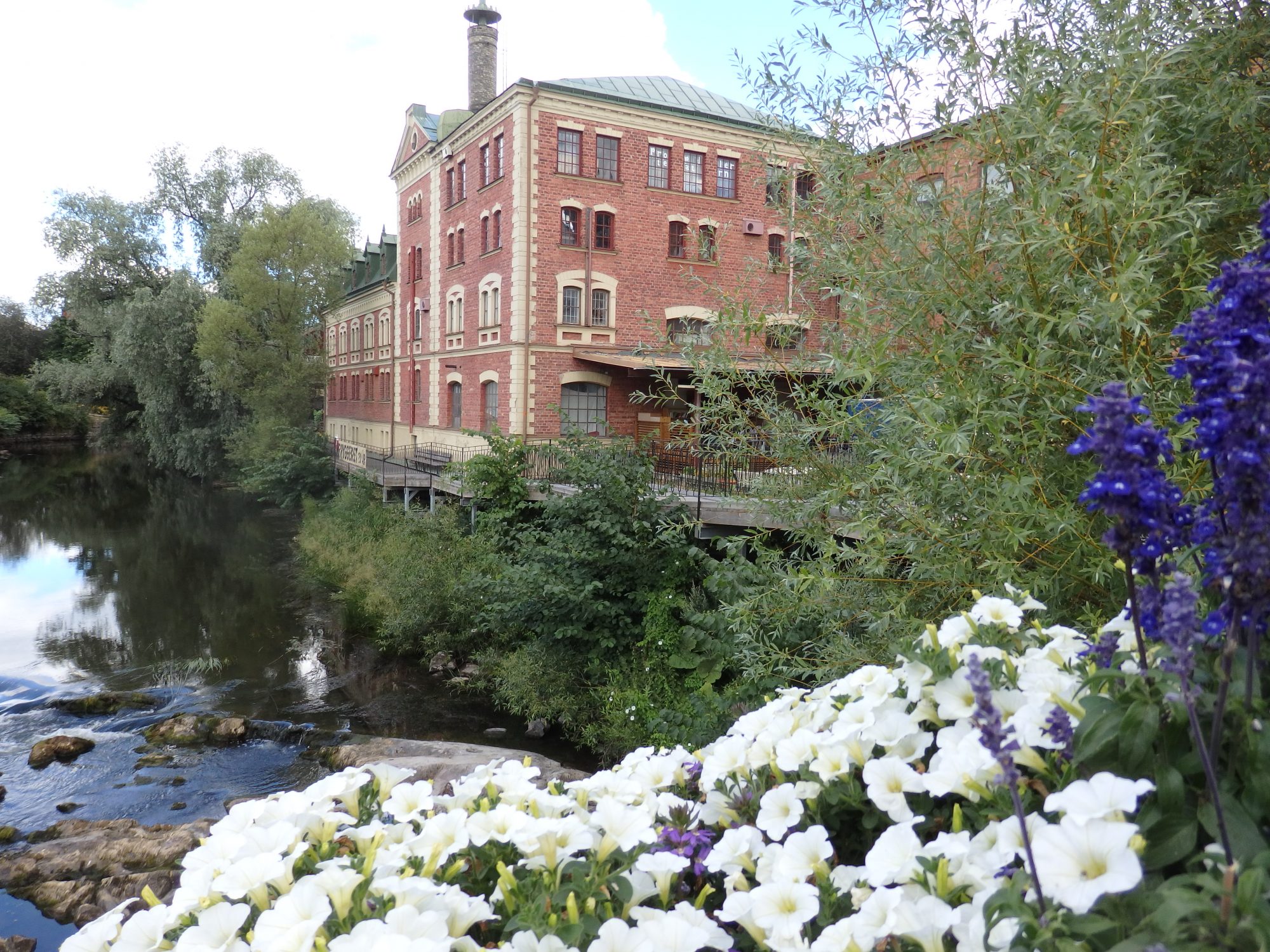 Nyköping was founded in 1187, which makes it one of Sweden’s oldest towns. Unfortunately, not much remains from so early because of the fires that have destroyed the town several times in its history. The medieval church in the center is worth a stop, if only to admire the truly monumental doorways. The painting over the altar dates from 1739. 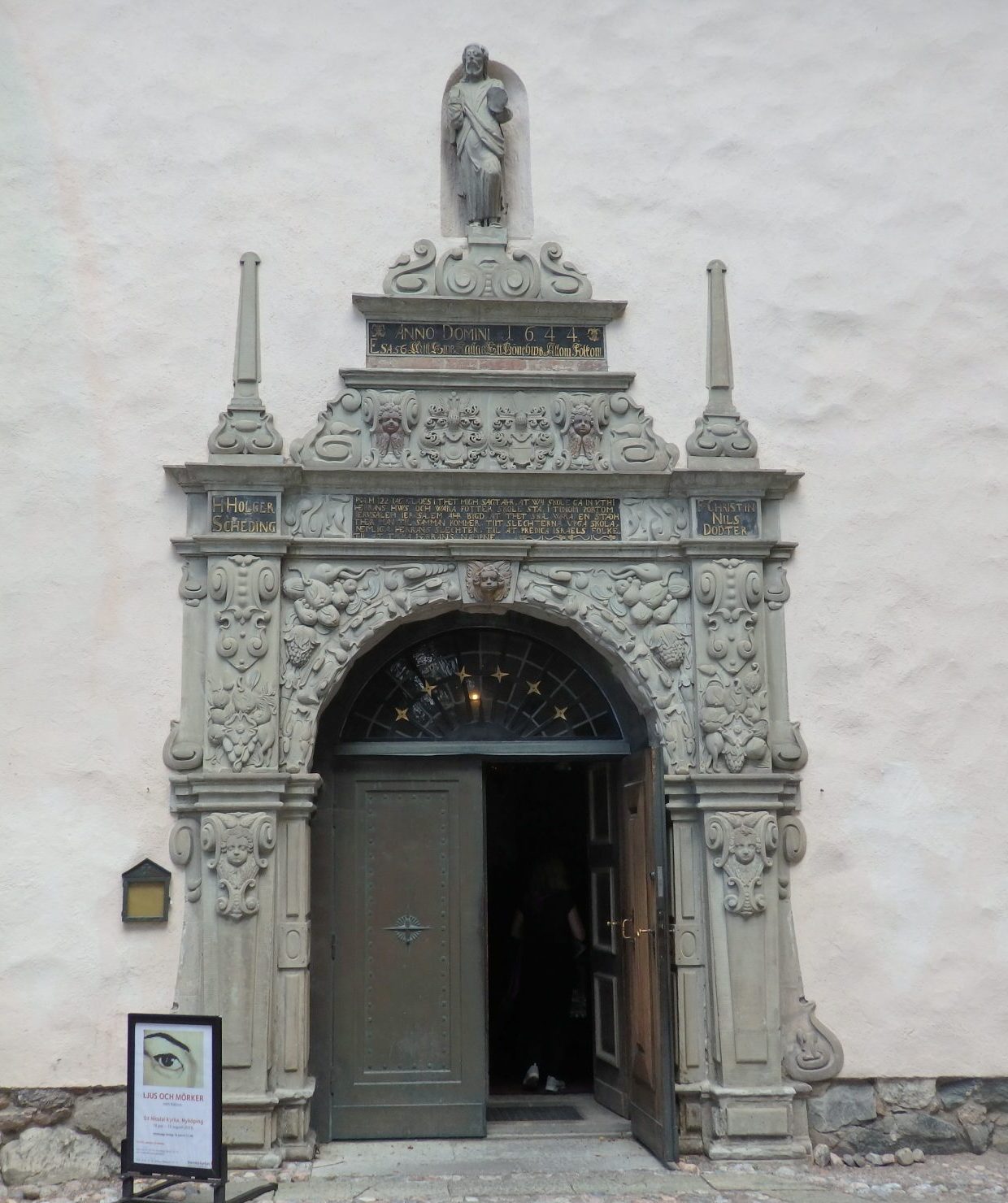 entrance to the church in Nyköping center

Check out the old center too, filled with buildings of a much later period but still charming.

You’ll see images of keys here and there in Nyköping. This symbol stems from a banquet that was held here in 1317. King Birger, in the midst of a power struggle, ordered his brothers, Erik and Valdemar, thrown into jail after the banquet. The story goes that he threw the key into the river and his brothers died soon after. Supposedly, a boy fished the key out of the river more than 500 years later.

along the river in Nyköping. I think that is a repurposed factory building.

As part of our tour, we stayed in a repurposed Sunlight soap factory, appropriately named Sunlight Hotel. (I remember Sunlight soap not from my youth but from my Peace Corps years in Malawi. Sunlight soap was inexpensive, so its strong but cheerful smell became very familiar to me.) The factory buildings have been converted into a hotel, spa and conference center. And they don’t smell like Sunlight soap anymore.

I loved that, to get to my room, I walked through a large hall lined with antique cars, a part of the hotel owner’s collection. The buildings are so big that there’s room for using the space that way. Apparently the cars can be rolled away and into a specially-built elevator when the hall is needed for a big event. The Edsel was my favorite. 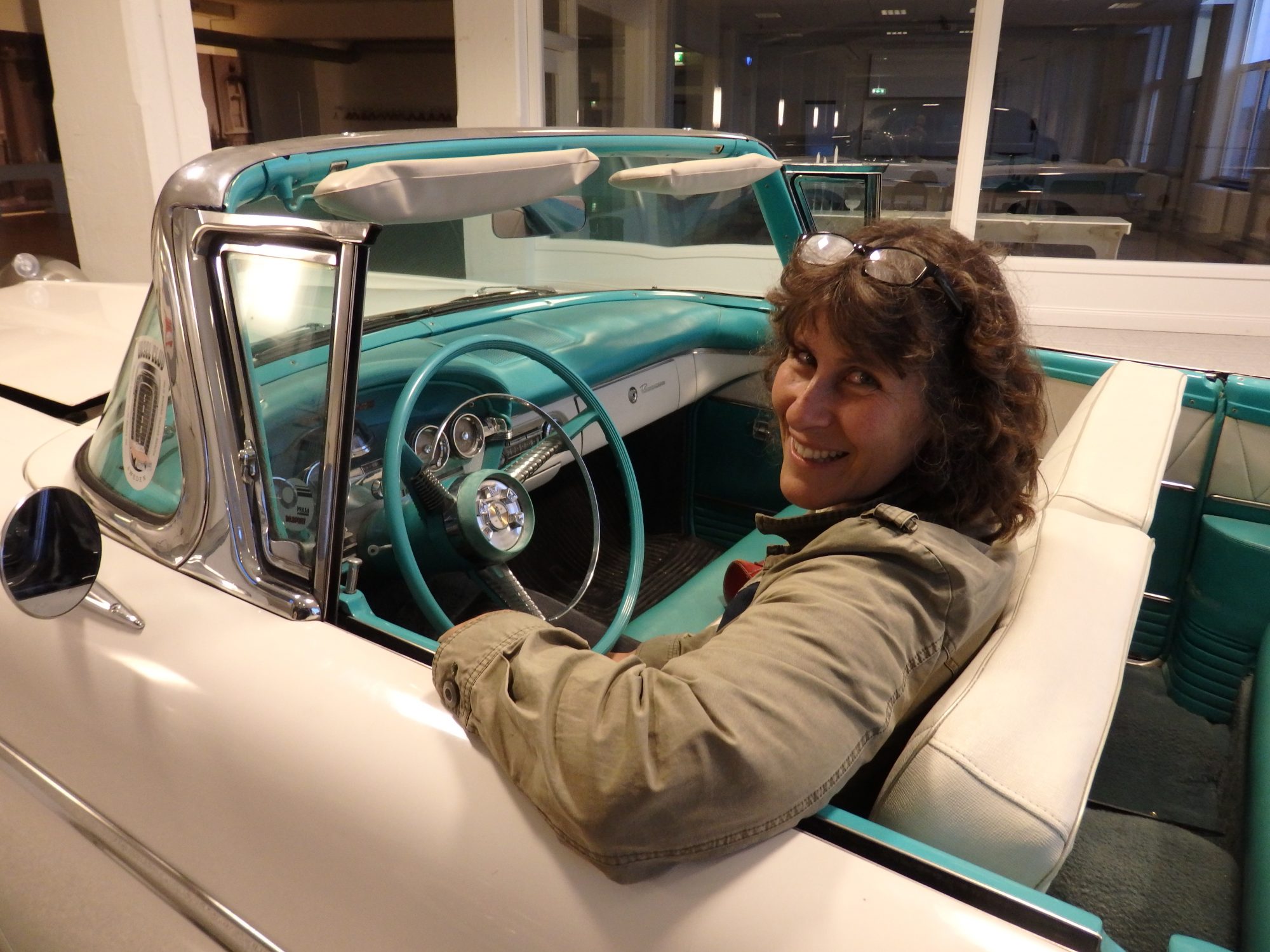 the Edsel and me

Anyway, Nyköping is a good base for exploring this part of Sörmland. From Nyköping, you can see a bit of the archipelago or go visit some of the many manor houses and castles that dot the area. Nyköping has a small castle of its own, by the way. 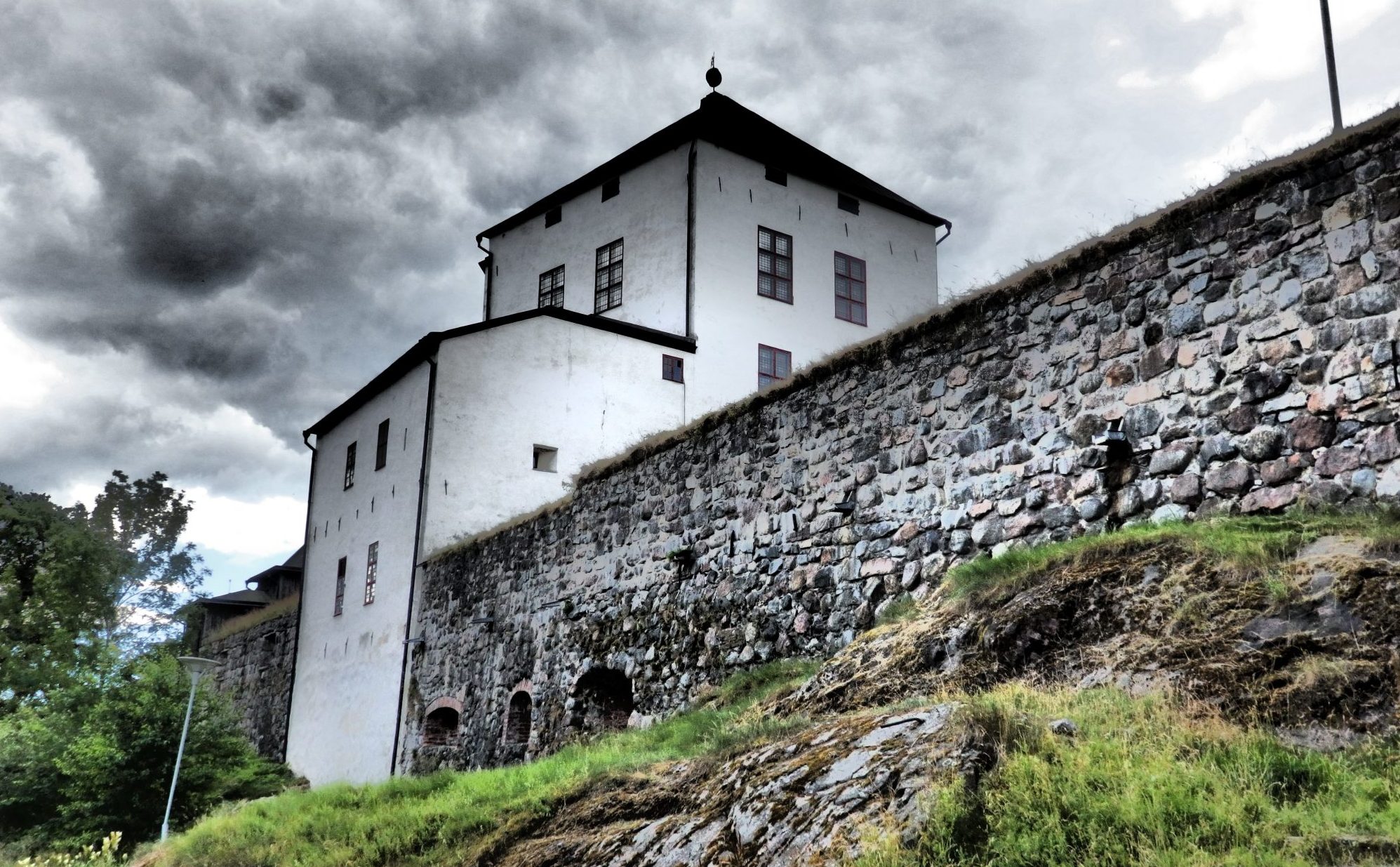 Take a picnic along, choose an island, and take a swim off the rocks. (I didn’t swim; it was much too cold for me, but some of the other people on the fam tour did.) Or just hike the paths across islands and bridges to enjoy the views of the sailboats, coves and islands.

Sörmland has established a walking trail that extends for about 1000 kilometers, and biking trails too. Starting outside of Stockholm, the Sörmlandsleden Vandringsled takes you to many of the high points of Sörmland, like Mariefred (Gripsholm Castle) and Äsköping (Julita). Judging by the scenery we drove through, it would be a lovely route through rolling farmland, woods and lakes. That kind of walking isn’t for me though.

Another thing I should point out is that Sweden has an interesting “right of access” law. What that means is that you may legally pick flowers, mushrooms and/or berries everywhere for your own use, unless they’re an endangered species. It also means you can camp anywhere, including on privately-owned property, but not in nature reserves, cultivated fields or populated areas. Please be polite, don’t litter, and ask the landowner where the best spot is for camping.

Nevertheless, if you don’t mind roughing it, it might be a cheap way to spend some time in Sweden: walk the Sörmland trail, camping as you go. 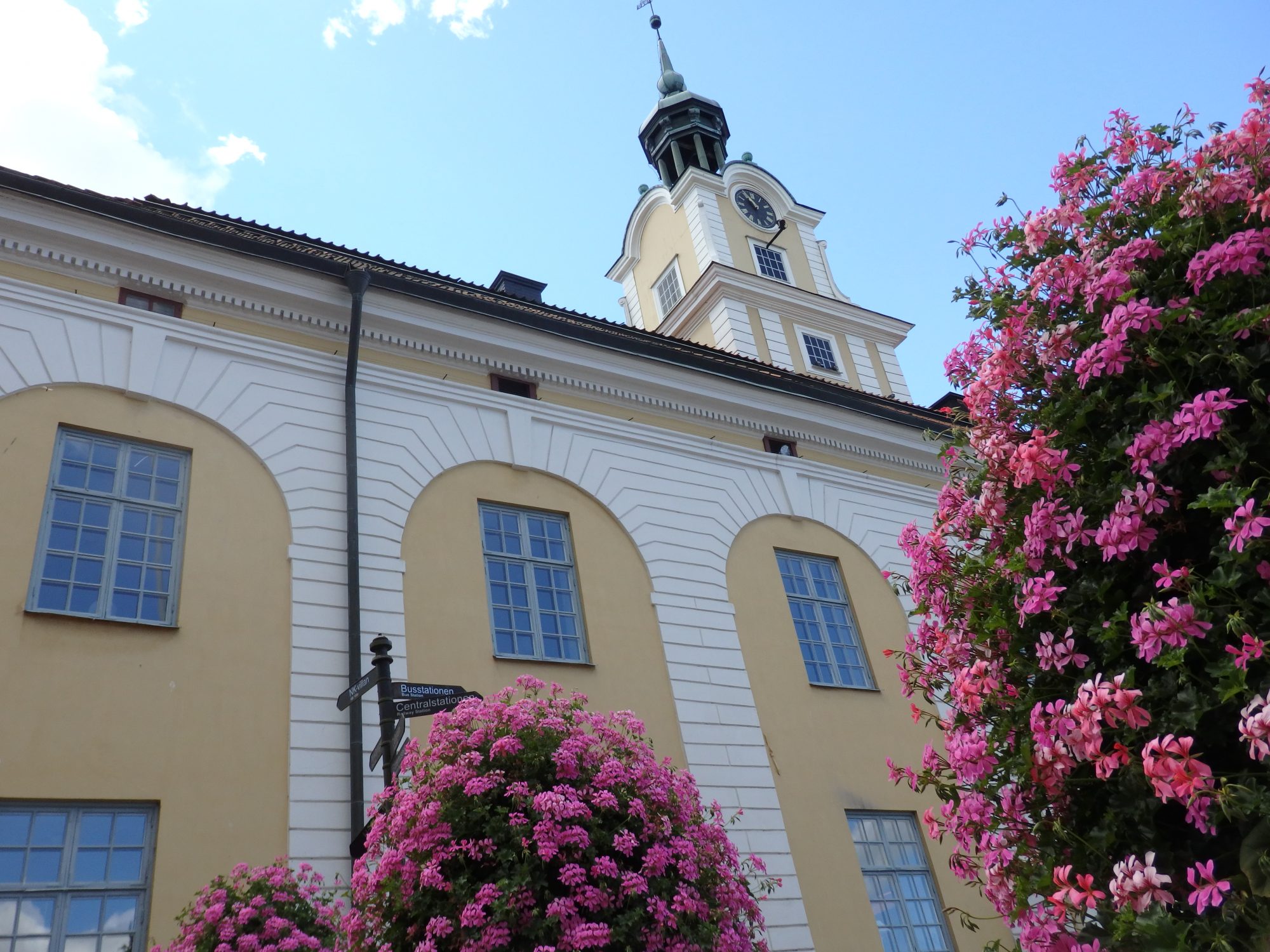 one more pretty picture in Nyköping

I visited two nearby manors on the same trip. I wrote about Nynäs already and I’ll write about Oster Malmo another time. Others you could visit from Nyköping are Mälsåkers and Säfstaholms castles, which I have not seen.

Have you traveled in this part of Sweden? What did you most enjoy?

Disclosure: I visited Nyköping on a fam tour sponsored by Visit Sörmland and Visit Sweden. All opinions, however, are my own.