It’s not the kind of sightseeing I usually do, but touring the Reichstag dome was so highly recommended by a friend that I decided to do it anyway. It was also a bit of a relief after all the grim history I’d been learning about at the DDR Museum, the Stasi Museum, the Berlin Wall Memorial and the Jewish Museum. 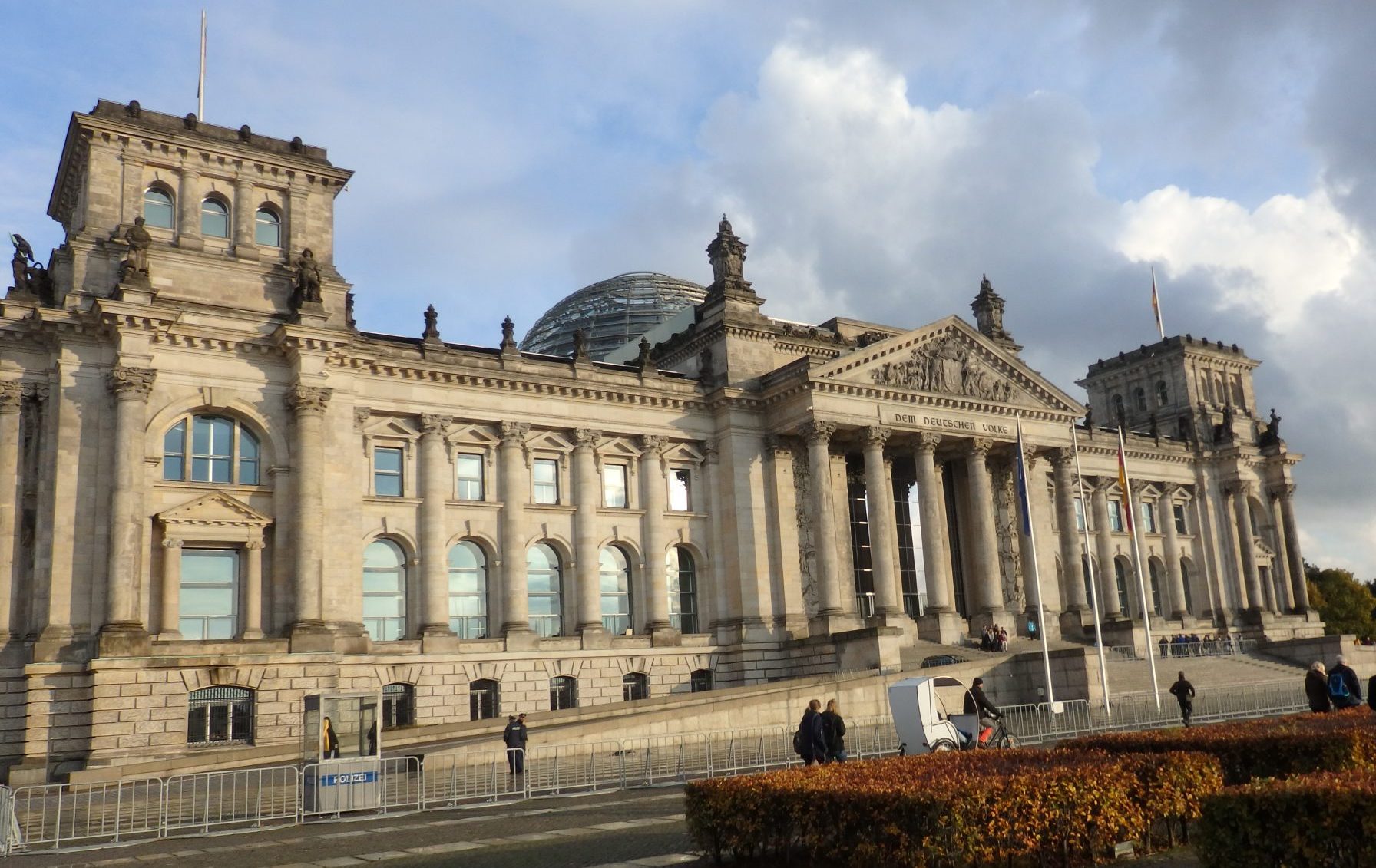 History of the Reichstag

The Reichstag is the building where the Bundestag—the German parliament—meets. Built in 1894, it was used until 1933, when there was a huge fire, set by a Dutch communist named Lubbe. That event allowed Hitler, who had been sworn in just a month before, to order mass arrests of communists, which in turn allowed the Nazi party to gain a majority in parliament.

It’s not clear if Lubbe acted alone, or even whether he did it at all. The Nazis might have done it to consolidate Hitler’s power.

During that period, the building was minimally restored, including removing most of the decorative statues and other detail. It was only used for occasional events for the rest of the period of German division. The problem was that the Berlin Wall, and thus the border with East Germany, was just meters away from the building. 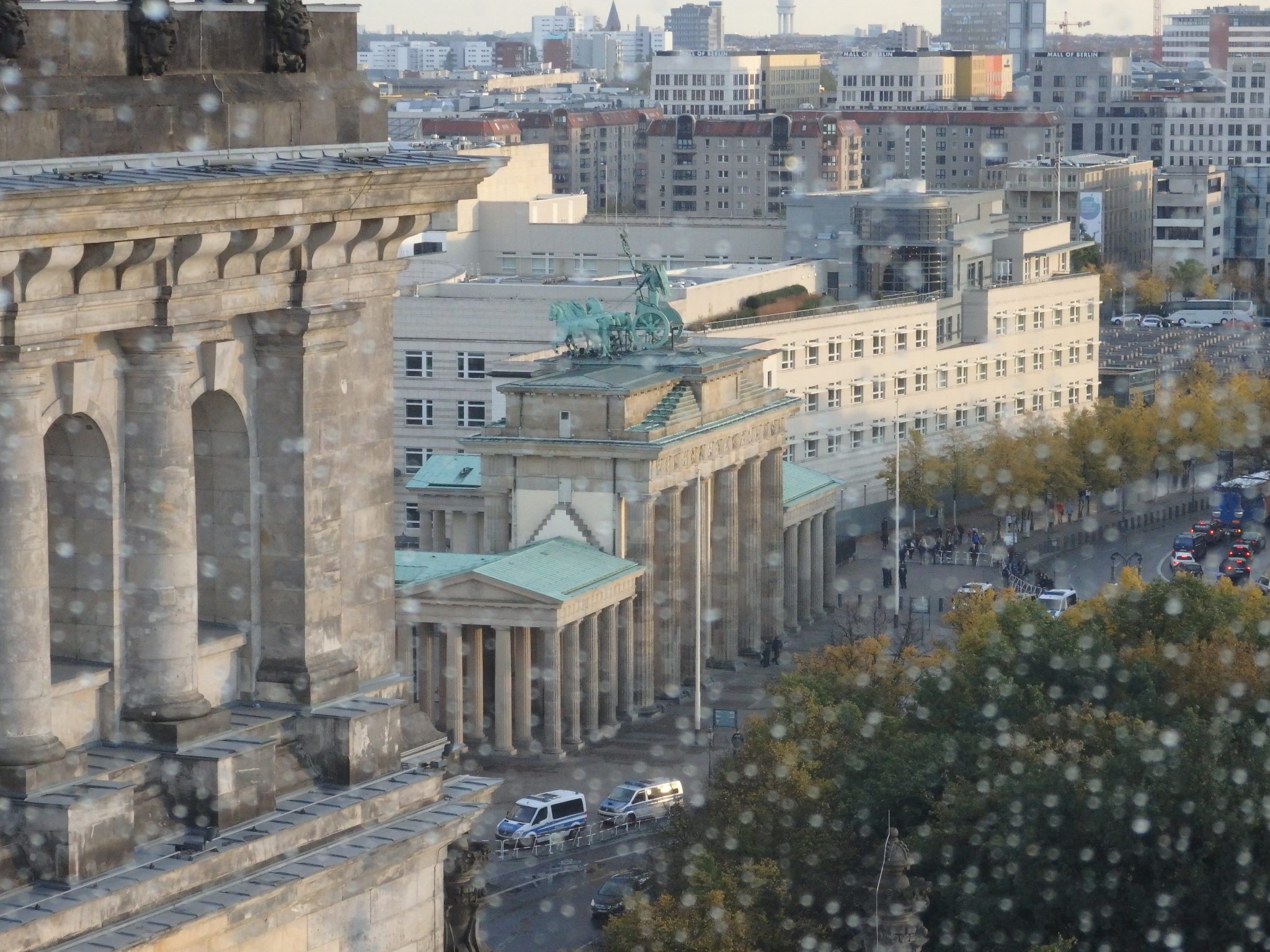 This picture shows the famous Brandenburg Gate. Built in the late 18th century, it was meant to represent peace. During the Cold War it was on East German territory and inaccessible to both East and West Germans. The white building just beyond it is the new US Embassy.

When Germany reunited in 1990, the government decided to reconstruct the Reichstag completely.  Architect Norman Foster led the effort, which was not finished until 1999.

So that’s what we went to see: Norman Foster’s reconstruction and, in particular, the dome. Made of steel and glass, the new dome echoes the old one that was there originally, and offers a 360 degree view over Berlin. 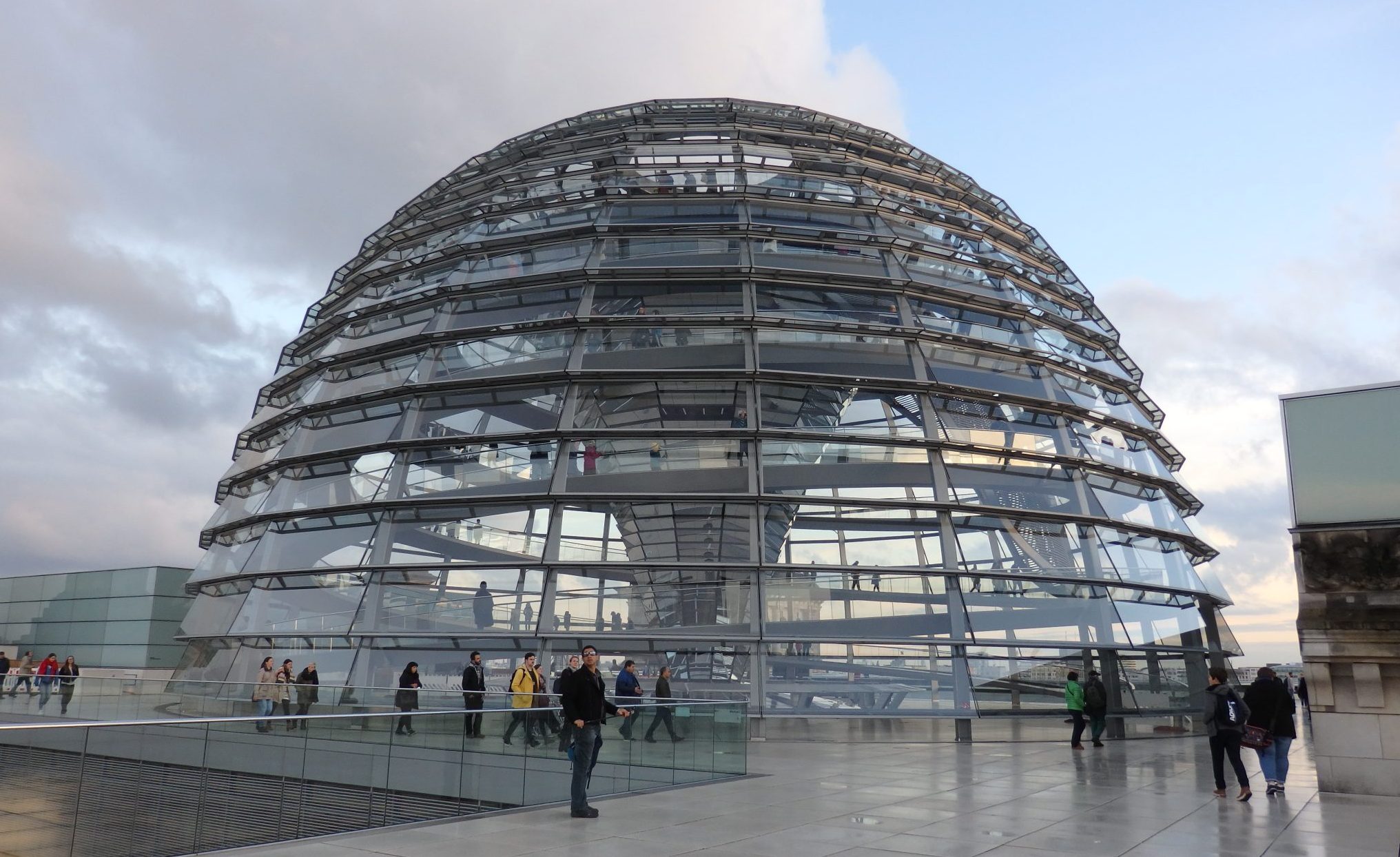 The Reichstag dome as seen from the roof

The Reichstag is the seat of the German government, so security is tight. I visited with a friend from the US who happened to be in Berlin at the same time as I was, and two of her friends came along as well. I had been warned to register ahead of time. Admission is free, but pre-registration is recommended, since they only allow a limited number of visitors per day. Identification is required.

We, along with everyone else who had registered for the same time, first took an elevator to the base of the dome. We could pick up a free audio guide, which pointed out elements of the dome as well as of the views.

The route follows a spiral ramp around the inside of the dome, allowing views on all sides. Wide enough for everyone, you can stop and look and take pictures without getting in anyone’s way or feeling rushed at all. A separate ramp spirals back down, and leads visitors onto the roof at the base of the dome. 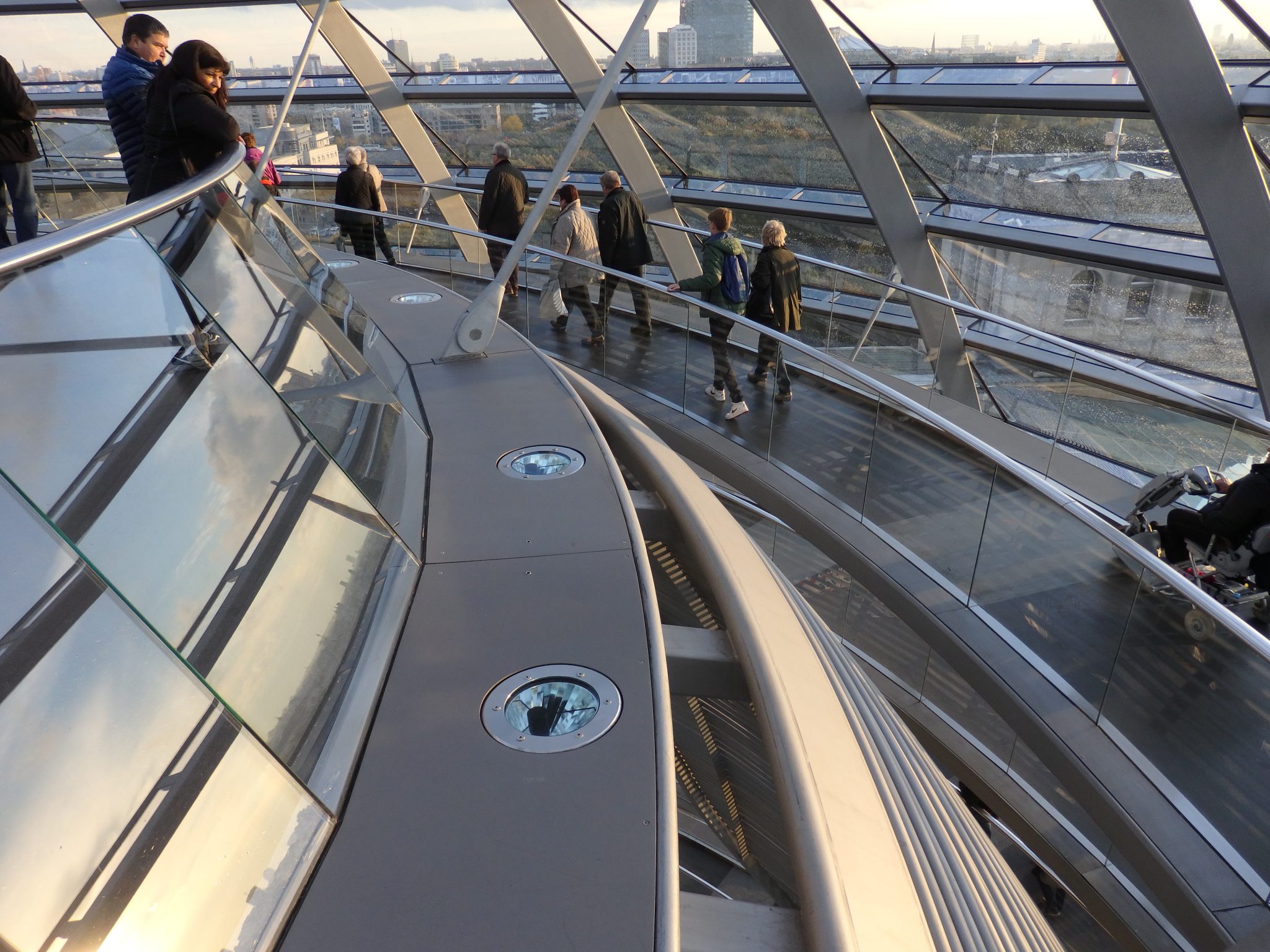 Here you can see one of the upward ramps and, on the left, the open space at the top of the ramps.

We had timed our visit for late afternoon with the idea that we could see the sunset from the dome. Unfortunately, the day was intermittently overcast and sometimes rainy. That diminished the views and offered us a rather underwhelming sunset. My pictures, taken through the dome’s glass, show more raindrops than views. I was glad I could go out on the roof to take a few clearer shots. 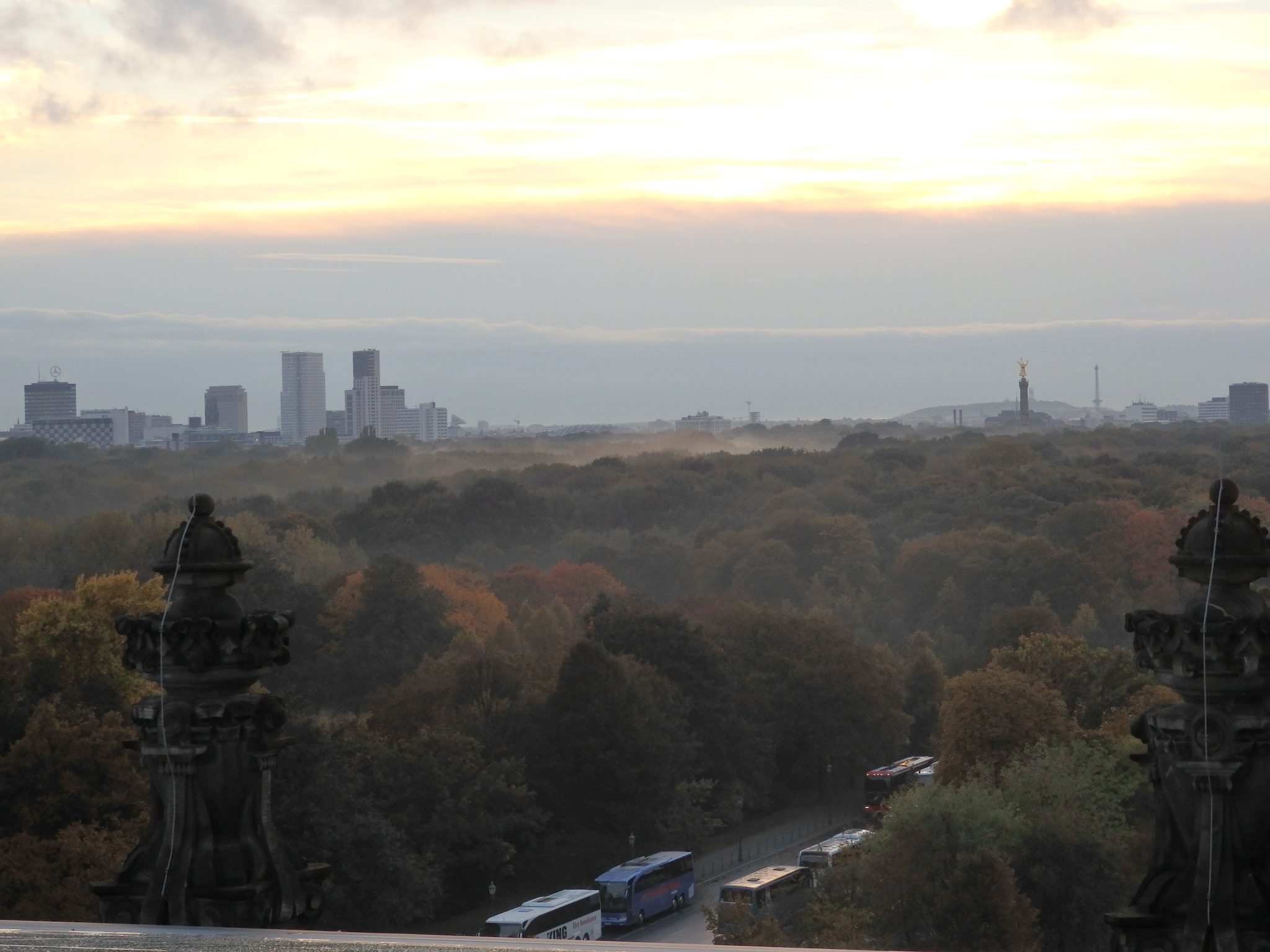 Our sunset ended in a bank of clouds on the horizon. In the foreground, the Tiergarten park. The buildings in the distance on the left are the “City West” district around Kurfurstendamm. The pillar on the right is the Victory Column at Grosser Stern.

Architecture of the Reichstag

When the Reichstag was rebuilt, the exterior was restored to its original glory while the interior was completely replaced and modernized.

The dome, though, was a departure, and much more modern than the rest of the building. Looking down from the spiral walkway, I could see into the main meeting hall used by the parliament itself. This allows natural light in, saving energy and reducing carbon emissions. A large “sun shield” moves on a circular track inside the dome, filtering the sunlight so it doesn’t overheat the chamber or become too bright for the people below.

As for the view …. well, Berlin isn’t a particularly pretty city. It sustained enormous damage in the war, so most of what we could see was post-war architecture, except for a few buildings here and there dating from the 18th and 19th century. The nearest buildings are mostly government-related. Further away, we could see the growing city in all directions. 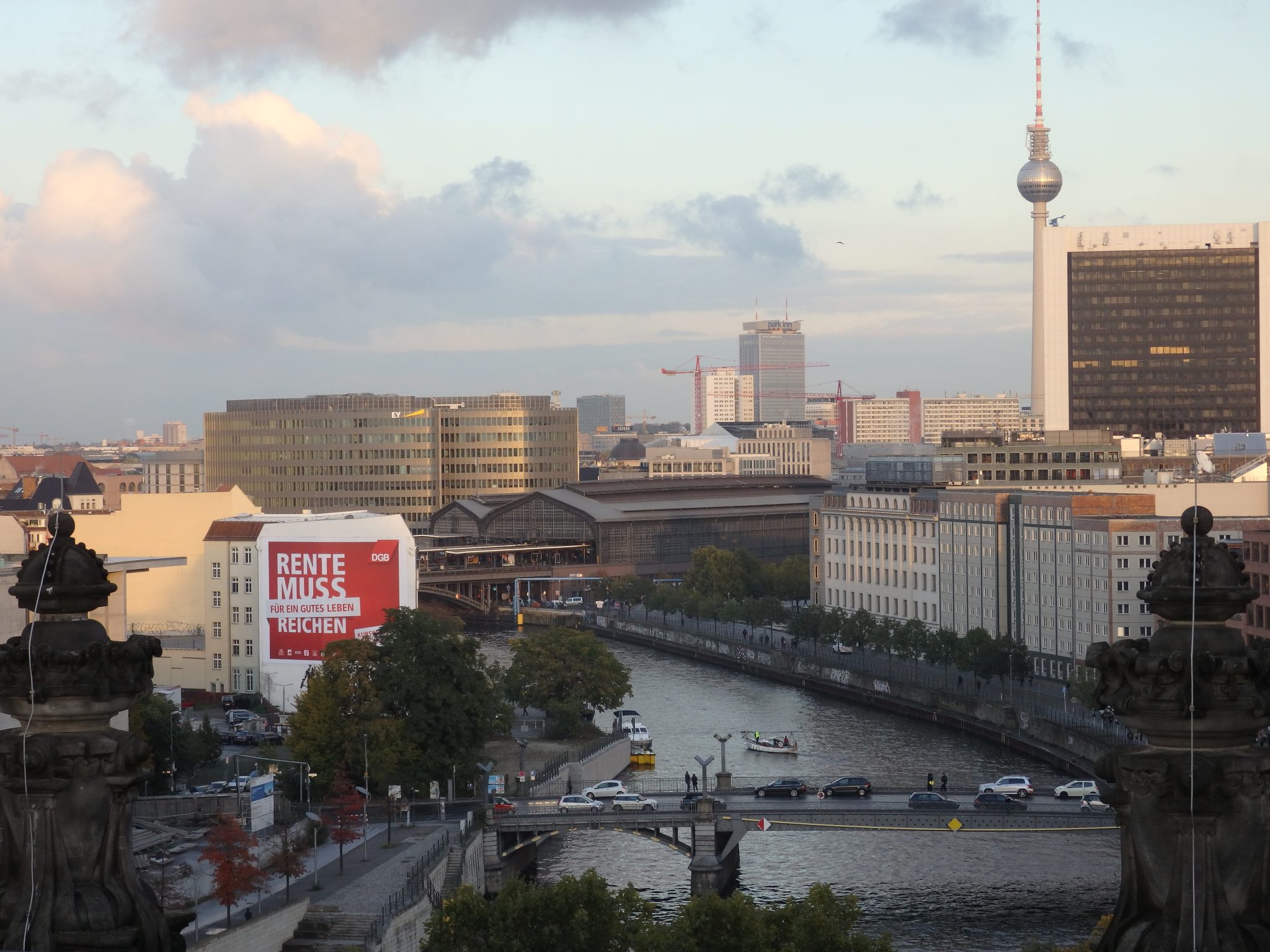 One of many views from the Reichstag dome; in this case, from the roof. Here, on the Spree River, you can see Friedrichstrasse Station, the low brown building; the Television Tower; and, in front of the tower, the International Trade Center.

The Reichstag dome would be a good place to start a visit to Berlin, to get your bearings. It is also worth a visit for anyone interested in post-war architecture. For me, it wasn’t exciting, but I was glad I got that overview of the city. And, of course, it was great to catch up with an old friend at the same time.

Have you visited the Reichstag dome? What did you think?