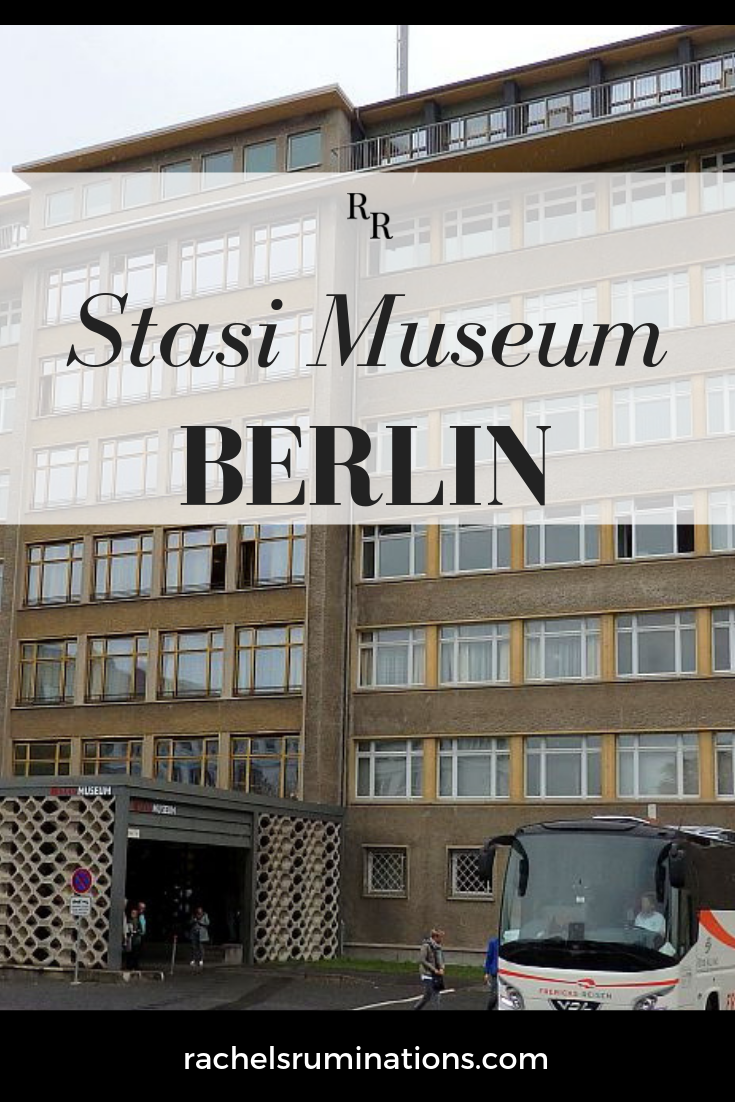 At both the DDR Museum and the Palace of Tears, I learned about the kind of everyday surveillance that East Germans endured in Cold War Germany. To find out more, I went to the Stasi Museum as well.

Disclosure: As at all the museums I visited in Berlin, I received free admission. Nevertheless, all opinions are my own.

The word “Stasi” was a nickname for Ministerium für Staatssicherheit, which translates as the Ministry of State Security. Its task was to keep the SED (the Socialist Unity Party of Germany) in power.

At the Stasi Museum, it becomes clear how the Stasi managed to keep everyone under control for so long.

First of all, its bureaucracy was enormous. By the time the Berlin Wall fell, its headquarters in Berlin covered 22 hectares (54 acres) with 50 office buildings where 7000 people worked.

The Stasi Museum is housed in one of these buildings, called Haus 1. What struck me most was how familiar and ordinary the hallways and stairwells looked. This could be any older office building in any western country. It was hard to imagine that so many truly reprehensible acts were planned and managed from here.

The ground floor holds offices and a rather grim café, and the only exhibits there are a scale model of the Stasi headquarters and a van for transporting “criminals” for questioning.

Upstairs on the first floor, exhibits explain the expanding responsibilities of the Stasi after the establishment of East Germany. Displays show training materials that emphasize the evils of Western Europe.

Another section focuses specifically on collaborators, of whom there were many. While some were paid, some were volunteers, currying favor with the more powerful Stasi employees. The Stasi had its hand in all sorts of political and societal organizations, with informers reporting back on every aspect of society.

You might also like to read my article about other World War II and Cold War sites in Berlin that you can visit.﻿

Erich Mielke at the Stasi Museum

On the second floor, called “The Minister’s Level,” visitors can walk through the offices used by Erich Mielke, the last head of the Stasi, and his staff. Still furnished as they were from 1962 to 1989, these rooms again gave me an odd feeling of familiarity. The furniture and cabinets, in particular, would not have been out-of-place in the 1960s Connecticut of my childhood.

One section focuses on the technology they used: spy cameras and how they could be concealed, bugs and how they were planted, how people’s scents were collected, and so on. The Stasi’s interrogation techniques are explained, as well as what happened to people who were found guilty of “hostile activity.”

Further sections relate the events leading to the fall of the Berlin Wall, followed by the unification of East and West Germany. They also address the debate over the Stasi’s records and whether they should be made public or not.

While the Stasi Museum addresses a fascinating aspect of German history after World War II, I would only recommend it to those who have the patience and interest to study the subject in depth. The displays are rather dry, with more text and photographs than objects. Very little of the museum is interactive in any way, though there are a few audio files to listen to and videos to watch. Children would get bored very quickly, and I found myself skimming, since there was so much to read.

For example, a display about people who worked for the Stasi or collaborated with them showed individuals’ photos with a written description of what each one did. While I see why it’s important to know that all sorts of ordinary people collaborated, the written descriptions soon blurred in my head, and I stopped reading.

Instead, I’d recommend the DDR Museum. It gives a glimpse into life in the DDR, including information about the Stasi’s pervasive surveillance. Yet the presentation is more interactive and less grim, interspersing lighter topics with weighty ones like the Stasi.

There’s also a Spy Museum in Berlin which I didn’t have time to visit. A friend took her daughter and said it was interestingly interactive and very child-friendly.

Have you visited the Stasi Museum? What did you think? Add a comment below!