Benidorm is one of those places everyone has an opinion about, and it usually isn’t good.

When I asked my husband what he thought of the place, he described it as “an overgrown beach town with high buildings right up to the beach.” It was full, he said, with “loud Dutch and fat, pale, English tourists.” He added that the tourists end up burnt to a crisp, and that Benidorm had no original Spanish anything left: everything was in English or Dutch.

After our visit to Benidorm, my first mention to some friends of ours brought this reaction: “I’d never go there!” 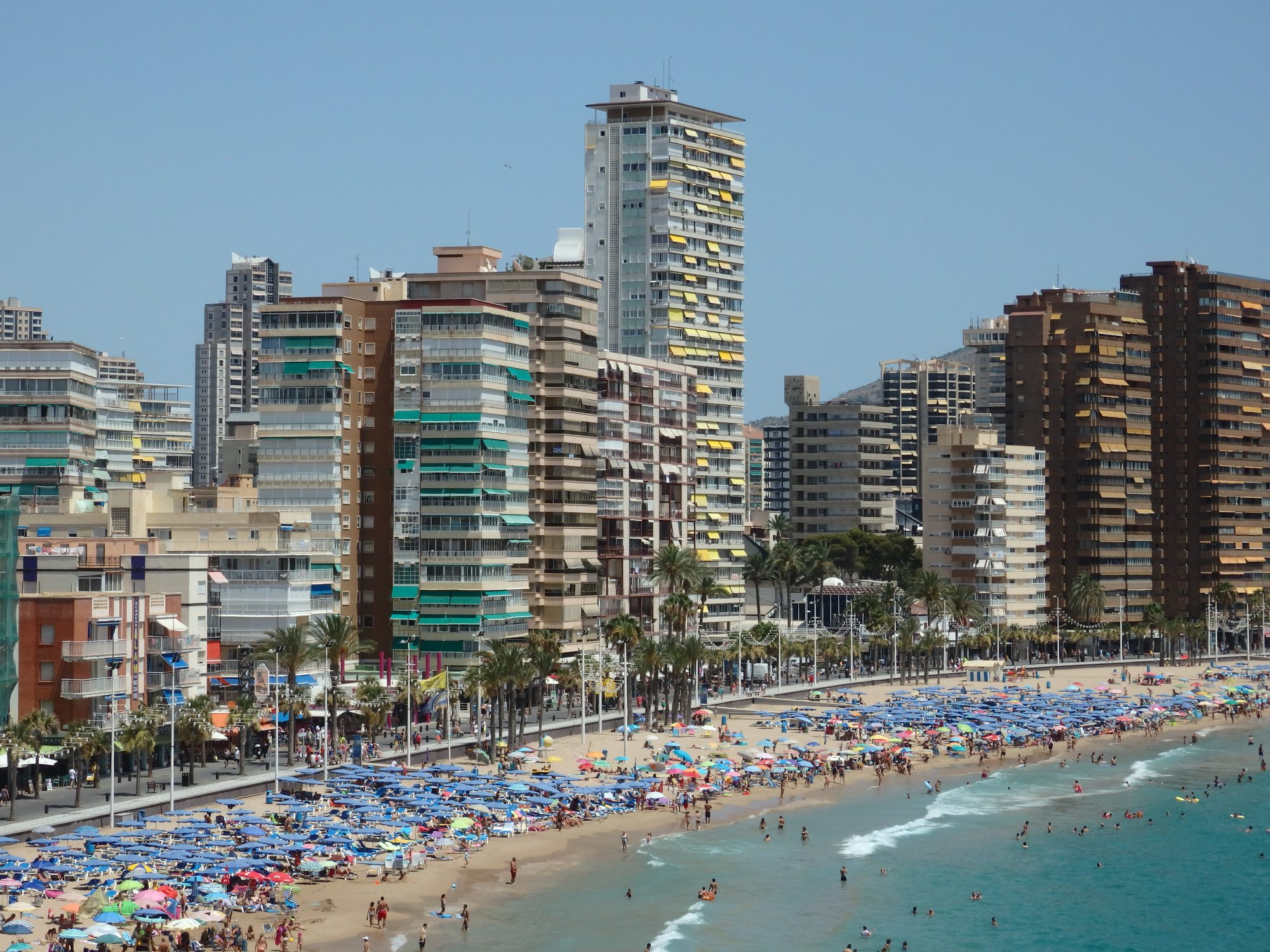 one part of Levante beach in Benidorm

Why we visited Benidorm

For our family vacation this year, we chose the Costa Blanca and the Costa Brava: about a week and a half in each place. We chose Spain because this year we would be traveling with five people—my husband, three teenagers and me—and we knew it would get expensive. Food is cheap in Spain. Also we could drive there in our hybrid car quite cheaply compared to buying five plane tickets to any more distant destination.

Meanwhile, I met Carola Valls from Visit Benidorm at the recent TBEX conference in Stockholm. She told me that Benidorm isn’t what people think of it and that the city is working on changing its image. When I said that I would be staying nearby over the summer with my husband and three teenagers, she offered to arrange for a visit to a water park for the kids, and to give me the chance to see what Benidorm has to offer.

To some extent my husband’s preconceptions are true: there are many tourists—English, Dutch, French and many others—and many of them are, not surprisingly, sunburnt. The buildings along the water are, indeed, very tall, compared to other beach destinations in the Costa Blanca. The shops and restaurants at street level along the beach offer the usual range of goods that you’d find in any beach town: souvenirs, food, beach items, etc. I saw signs in English and Dutch, but also in Spanish.

Benidorm has two long sandy beaches: Levante, which means “sunrise” to the east and Poniente, which means “sunset” to the west. According to Carola, the beaches are cleaned carefully every single evening, so the water is beautiful and clear. Between the two main beaches is a promontory and the old, original town of Benidorm.

On that promontory is probably the best place to get a good view of both beaches. It’s called Castle View or Mirador, and its relatively quiet, white and blue-painted plaza makes a good place to sit in the shade of a tree and listen to the resident guitarist strumming folk songs. 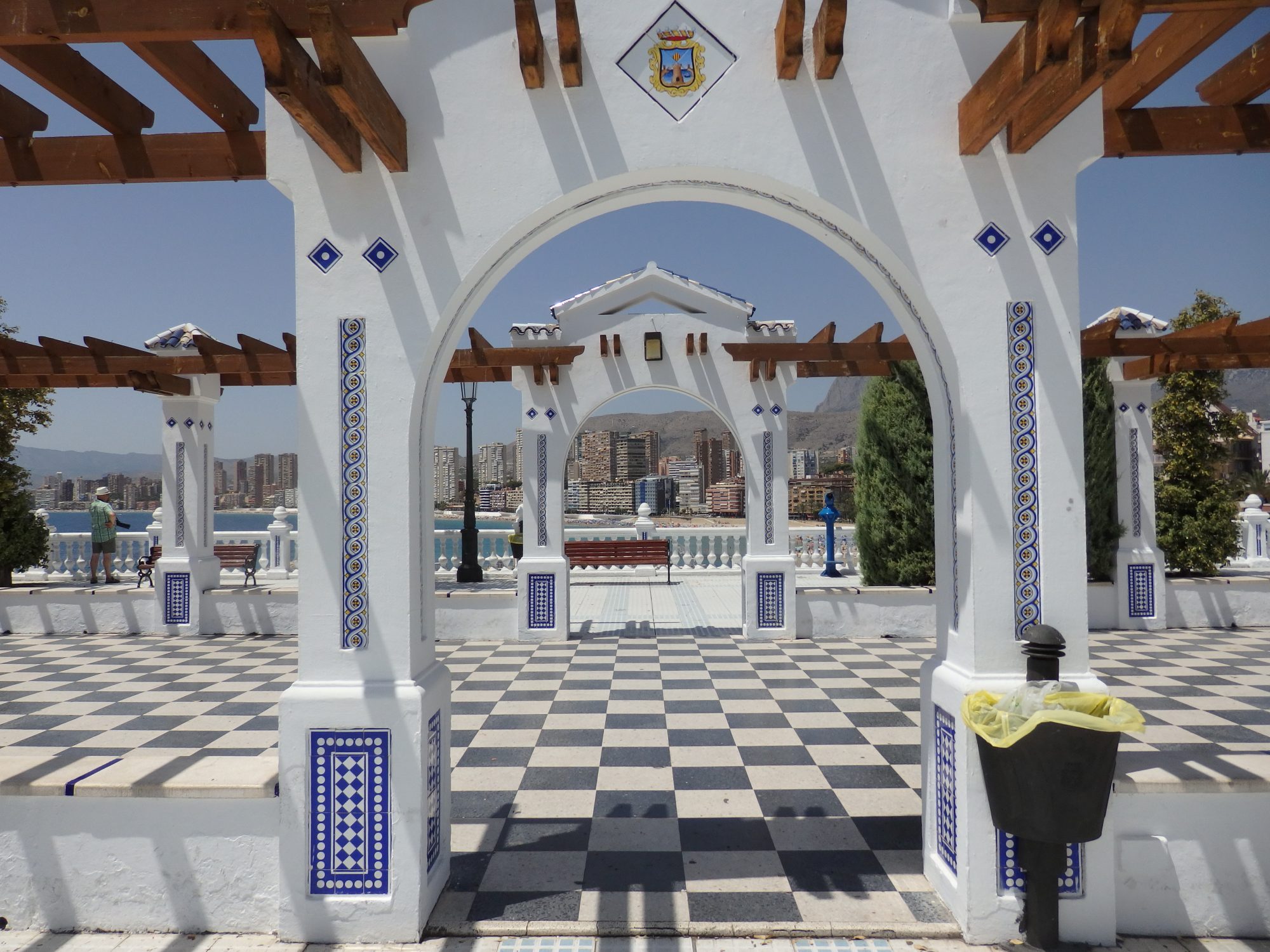 view from Mirador in Benidorm with Poniente Beach in the distance

The old part of town has the characteristic narrow streets of many towns in the Costa Blanca. One street is referred to as “Tapas Alley” because of its abundance of cafés where, if you order a drink, you get free tapas. Another section is the gay neighborhood, with many small boutiques. The busier main roads tend more to the typical tee-shirt stores, ice cream stands, and jewelry shops.

My husband’s impression that little of Spain remains in Benidorm is definitely false: I heard a lot of English as I wandered in the old town section and on the promenade along Levante Beach, but I heard more Spanish. Of course, it’s hard for me to know whether they were locals or tourists from other parts of Spain. 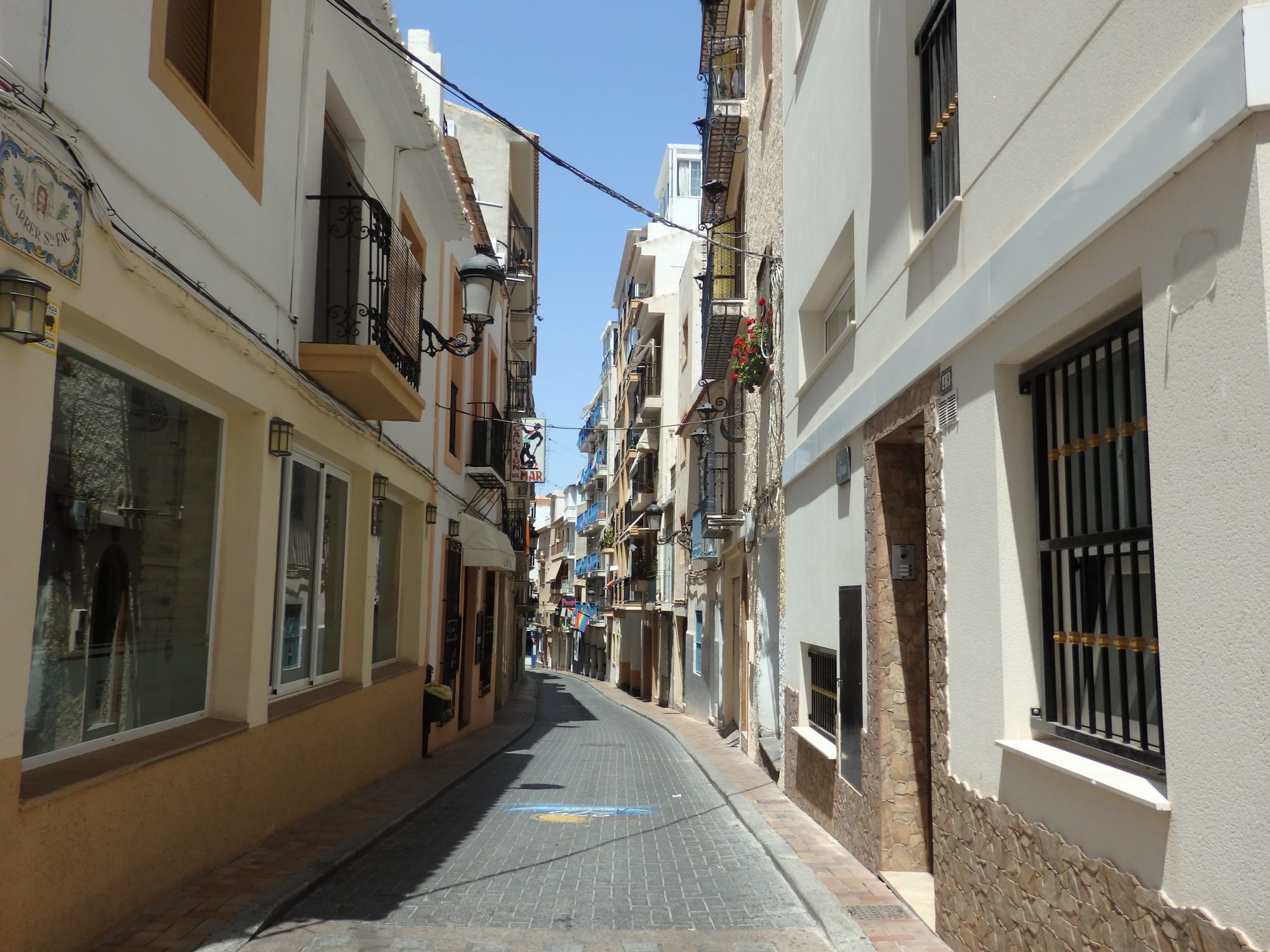 a street in the old section of Benidorm

The atmosphere as I walked along the Levante Beach “promenade,” a polished-stone walkway between the shops and the beach itself, could only be described as “holiday happy.” People go to Benidorm to enjoy the beach, and that’s what they were doing.

While the beach was crowded, it was peaceful, and I enjoyed watching all the usual beach activities you would see in any beach town. Some sections were more crowded because that was where concessions rented out umbrellas and lounge chairs.

At certain restaurants and bars along the promenade I saw groups of twenty-somethings, having a beer to the beat of loud music. But at other points along the beach, thirty-somethings with children dominated the scene, along with a liberal scattering of older empty-nesters, sometimes in pairs, sometimes in multi-generational groups.

In other words, if you’re looking for an easy beach holiday, where you can stay at a hotel or rent an apartment and spend each day at the beach, Benidorm would work, whatever your age.

Other things to do in Benidorm, with or without children

There’s plenty to do in Benidorm, though, besides sitting on the beach or drinking or eating tapas.

Since I was traveling with three somewhat reluctant teenagers (14, 16, and 18), Carola was kind enough to arrange tickets for Aqualandia, one of the water parks, which claims to be the biggest water park in Europe. They spent the day there while I explored Benidorm in more detail. I’ll post about Aqualandia separately later. 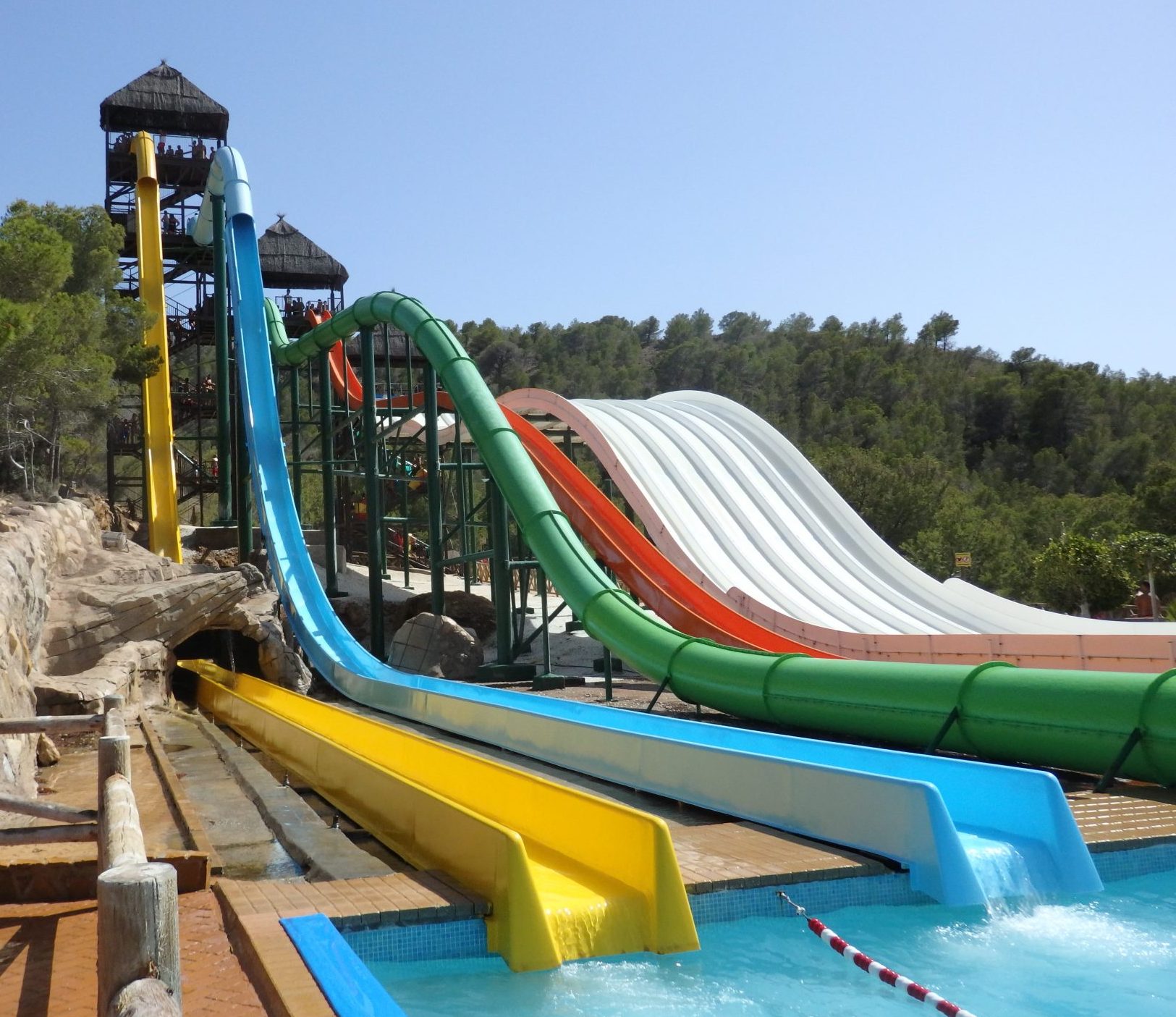 water slides at Aqualandia in Benidorm

If you’re into sport cycling, there are plenty of routes through this mountainous region to prepare for your next Tour de France. For the rest of us, renting a bike is a useful way to get around and to avoid the traffic in Benidorm’s downtown.

Carola arranged for me to use an e-bike for the day, provided by Tao Bikes. If you’ve never tried one, it’s a good compromise: you still get some exercise, but the engine kicks in and helps you as and when you need it. Besides just using your e-bike to explore the length of both Poniente and Levante promenades, I’d highly suggest getting out of town to the natural park Sierra Helada. That’s where I was glad to have an e-bike, because the winding road is hilly.

If you look along Levante Beach, you’ll see the beginning of Sierra Helada at the end of the beach, on the point of land after the buildings end. Popular for hiking, the views from some of the heights are breathtaking, particularly around the point with the ruin of a little watchtower, called Punta de Cavall. From there you can see the steep, eroded cliffs and watch the waves crash at their base.

Make sure, if you decide to go explore the park, that you bring plenty of water and sunscreen. Benidorm, because of the hills surrounding it, only gets about 17 days of rain per year.

If you hike to that little watchtower ruin, another thing you’ll be able to see is Illa Mitjana, a small rock island at the base of the cliffs. I didn’t get to dive there, but locals claim it’s some of the best diving in the Mediterranean. 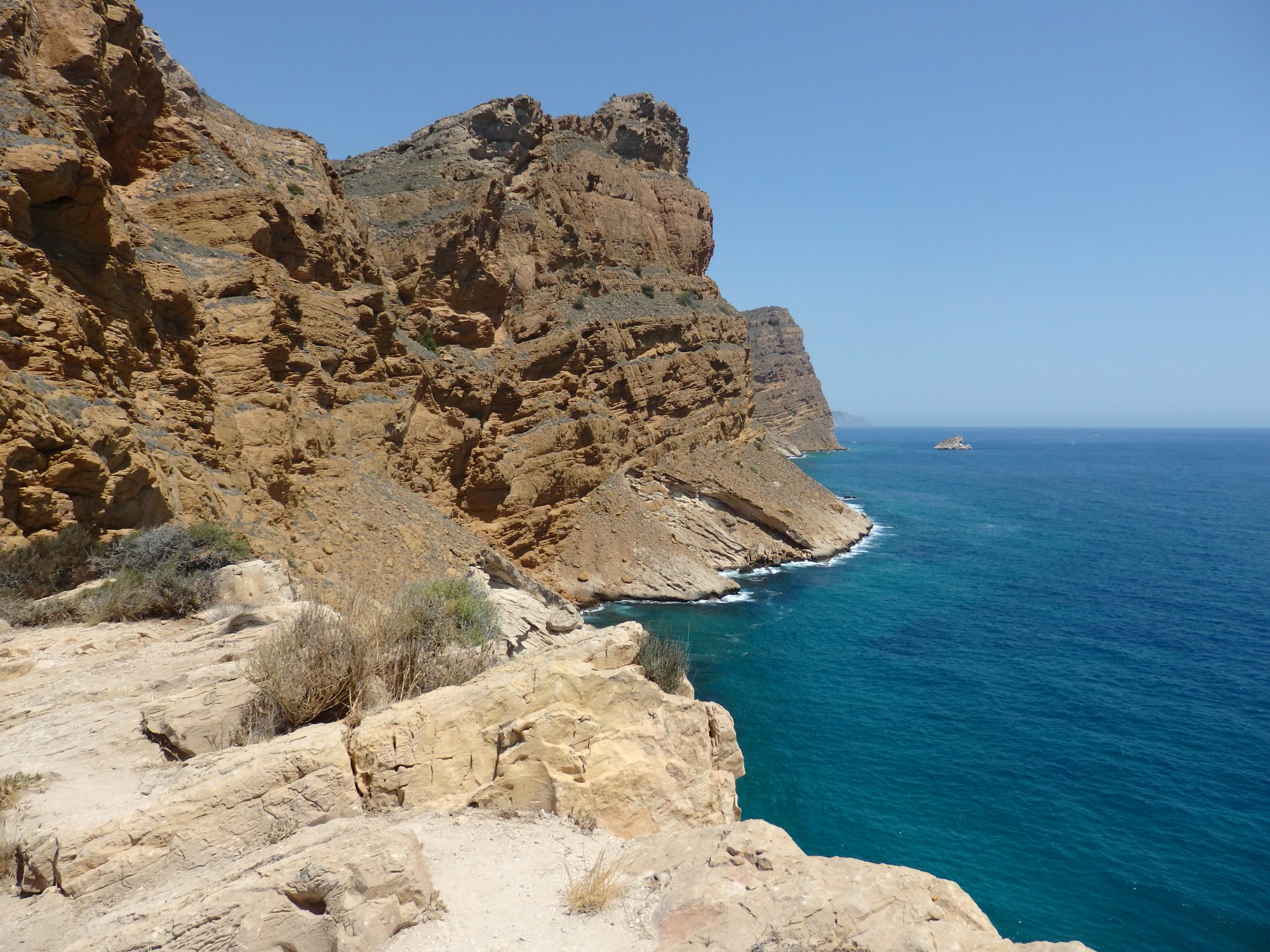 I took this photo from the watchtower ruins in Sierra Helada. The tiny island in the distance is Illa Mitjana.

With children, though, snorkeling would be easier. Two of the best places to snorkel are within the Sierra Helada Natural Park. I saw the two beaches from above: Cala Almadrava would require some walking to reach it, while Cala Ti Ximo is reachable by car. Both are tiny coves with small sandy beaches and calm, clear water. Neither was crowded when I saw them, on a weekday afternoon when Poniente and Levante beaches were packed. A warning, though: they have no facilities of any sort, so bring everything you’re likely to need. 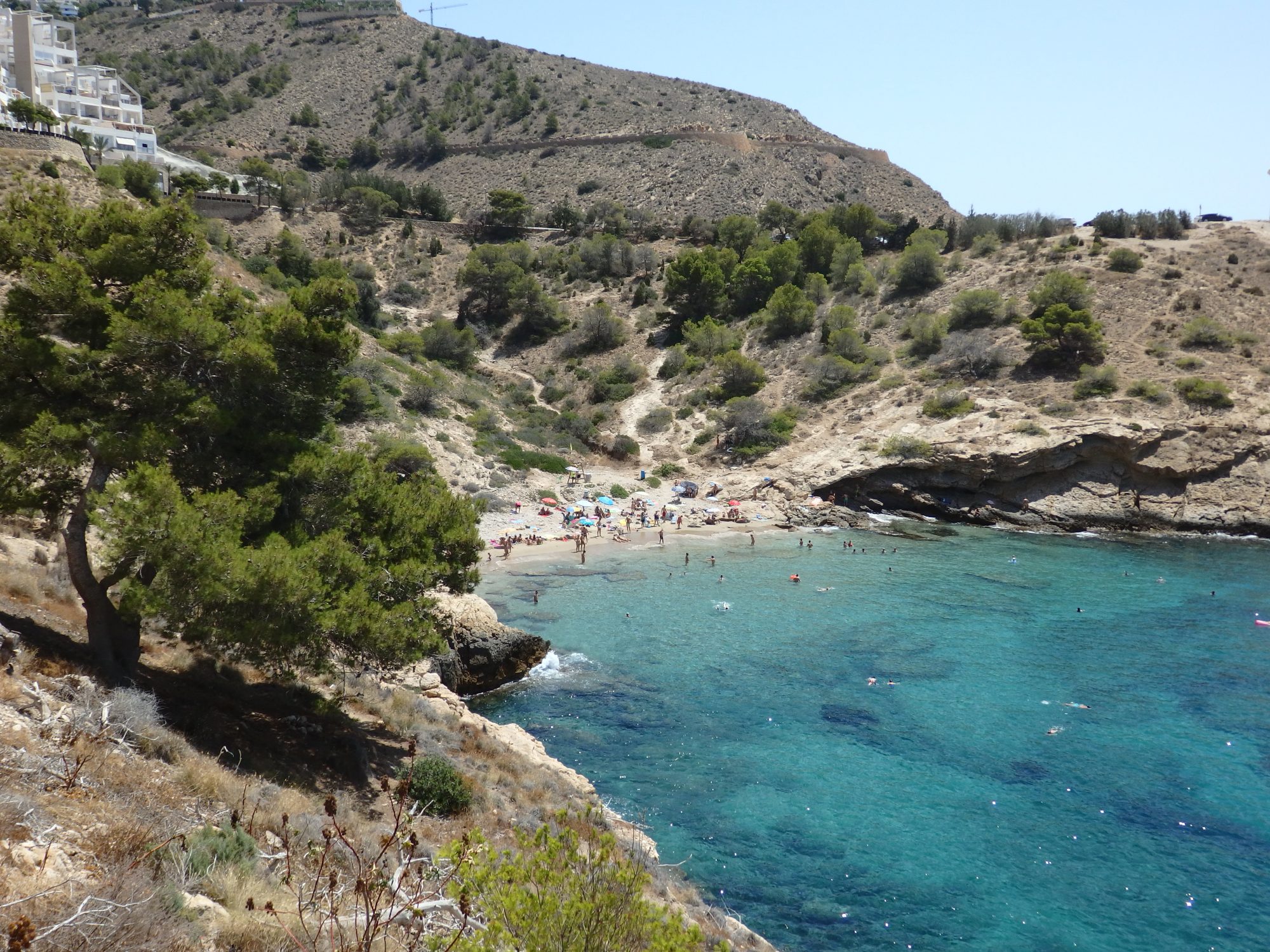 Cala Almadrava Beach. Look how clear the water is!

I didn’t get to try any of these, but you can also play golf in Benidorm, go horse riding, fishing, sailing, kayaking, jet skiing, parasailing, etc.

While Benidorm is indeed a big, perhaps overgrown, city with skyscrapers, I was pleasantly surprised by what I saw. It would be a good place to spend a week, especially with small kids, where you could stay near enough to the beach to not have to use a car. With my bigger kids, a waterpark was a welcome entertainment to get them to put down their smartphones for almost a whole day.

It doesn’t surprise me that Visit Benidorm is working on re-branding itself. It is no longer only a beaching and partying destination. In many ways, it reminded me of Lloret del Mar on the Costa Brava further north, which has a similar reputation that it no longer deserves.

Have you been to Benidorm? What did you think? Leave a comment below!

Disclosure: We received free admission to Aqualandia and I received a free e-bike rental from Tao Bikes. All opinions, however, are my own!