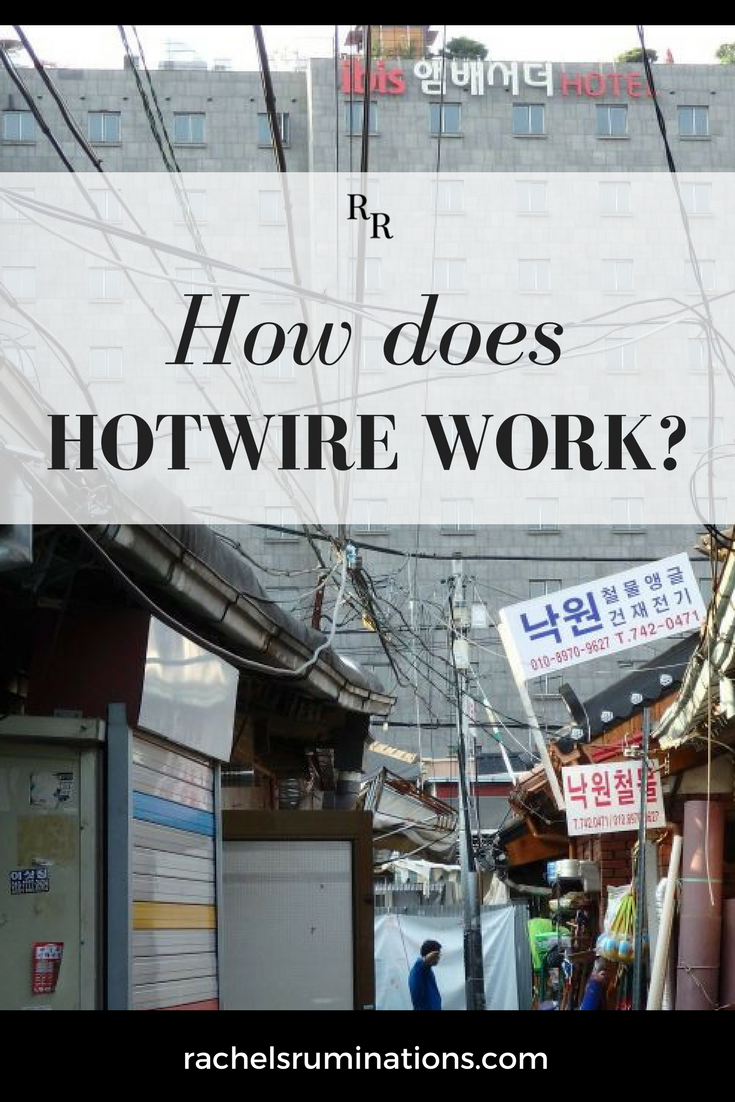 In my post about Arolithos “Traditional Cretan Village”, I described how I reserved my hotel room through Hotwire, and how Hotwire is a bit of a gamble.

(Disclosure: This post contains affiliate links. If you make a purchase through one of these links, I will receive a small commission. This will not affect your price.)

Hotels don’t want too many empty rooms. They’re willing to book rooms at cheaper than their standard rates in order to fill them and at least make something on them.

So how does Hotwire work? Their gimmick is that you can book a room at a deeply discounted rate, but you don’t find out which one you’ve booked until after you pay – and the payment is non-refundable and can only be altered in very limited ways. The reasoning is that hotels don’t want people to know that their rooms are available on Hotwire; if they did, no one would ever pay full price.

Why would you book a room in a hotel, when you don’t even know which hotel it is or where it is?

Let’s look at the process I went through to book a couple of nights in Prague. I started on the home page by just typing in the city name, the dates I’m looking for, and the number of people traveling.

Once I clicked enter, I landed on this screen. On the right is a map of Prague, with light green areas marked on it. Hotwire divides cities into districts so that you can search for a hotel in a particular district.

On the left are some hotel offers, but I wasn’t ready yet to choose one. I needed to narrow down the list first.

Its default setting is what Hotwire calls the “best match.” I disagree. What they call the “best match” is often not the cheapest. Using the little pull-down menu at the top, I ordered my results by price: lowest to highest, as you can see in the screenshot below.

I also wanted to sift out the lower-end hotels. A word of advice, if you are going to use Hotwire, always include higher star levels than you normally would consider. Sometimes, for example, you can get a four-star hotel for a three-star price. You can choose your star levels in one of the pull-down menus at the top. In this example, I’ve checked 4 and 5-star hotels:

I also like to choose some amenities that I consider non-negotiable: I always want free WiFi and I often choose breakfast included and/or free parking, if I’m arriving by car. Again, you can make these choices in one of the pull-down menus at the top of the screen.

All of this sorting and filtering narrowed down my choices, which is fine in a big city like Prague. However, I could also filter it even more.

Clicking on one or more zones on the map turns them darker green. In the screenshot below, you can see how I narrowed my search to one zone: Old Town.

The left side of the screen now shows only hotels with 4 or 5 stars, with free WiFi, with availability on my chosen dates, and located in Old Town Prague. They’re listed in order from cheapest to most expensive.

As you can see in the screenshot above, some hotels are described as “hot rate.” These are the ones that Hotwire keeps secret until you book them. Mixed in with the “hot rate” hotels are others that are listed by name.

Even for the “hot rate” hotels you might not be taking much of a risk. Notice the little question under the “hot rate” listing: “What hotel will I get?” If you click on that, sometimes (not always) it will show you three possible hotels, as in the screenshot below:

In this screen I’ve expanded the search to two zones rather than one, but otherwise it’s the same as the screenshots above. I’ve clicked on “What hotel will I get?” and it shows me three different ones. If I book this “hot rate” hotel, I’m guaranteed a room in one of these three hotels.

So in this case I’ve found a 4-star hotel for $54 a night in the vicinity of Prague Castle. The one above that is $51 a night in Old Town.

This is a great deal for the center of Prague. I could find something even cheaper if I a) tried other parts of the city or b) went for fewer stars.

Here’s another trick I just figured out recently. If you refresh the page in your browser and then click again on “What hotel will I get?”, the list of hotels will change.

So let’s say I choose the $51 hotel. It’s a four-star in Old Town Prague. It has free internet and I can read a whole list of its other amenities: whether there’s a restaurant or a gym or mini-fridges or whatever. It will give me a choice of bed and room types, but it will not tell me what hotel it is until I pay.

On the screens I’ve included above, Hotwire gives a general rating for each hotel out of five. I’m very suspicious of any hotel that rates under 4.0, but that’s your call.

It also includes the TripAdvisor rating and how many reviews it is based on. If a hotel has a rating of 5.0, but that’s based on only one review, you’re taking a gamble.

You can find out more about each hotel’s rating once you click on the hotel. Scroll down and you’ll see a chart where Hotwire’s rating is more detailed:

The rest of the process works like any hotel booking engine. Make your choice and work through the series of screens asking your information and processing your payment. Once you’ve paid, it’ll let you know which hotel you got.

A warning: if your plans change, you’re out of luck! These reservations are non-refundable and only changeable to the extent that you can add days, but not change the dates.

For more travel tips, try one of these articles:

I’ve used Hotwire a number of times, and almost always had good experiences, getting a four-star hotel for a three-star price. Here are some examples:

I used Airbnb for the most part on my solo travels several years ago in Japan and then Korea, but started having physical symptoms that brought me back to Seoul to see doctors. I’m normally a big fan of Airbnb, but I didn’t want to make small talk with Airbnb hosts when I didn’t feel healthy. I decided to book a room via Hotwire.

I ended up staying at three different 4-star hotels over about two weeks in Seoul because I kept getting new doctor’s appointments I had to wait for. Since Hotwire reservations are non-refundable and non-changeable, each time I learned I had to stay longer, I went back to Hotwire to book a new room.

I chose the section of Seoul that was closest to the hospital I had to visit. I could still end up far from the hospital, but Seoul has an excellent metro system, so it didn’t really matter where I stayed. Each hotel cost me about €40 a night, an excellent price for a four-star hotel.

I also got a glimpse of some areas that tourists would normally not see. For example, one of the hotels was in a neighborhood filled with lighting and hardware stores. That also meant, though, that the local restaurants were more authentic because they catered to Korean businessmen rather than tourists. And the hotel pictured above loomed over a fascinating traditional hanok neighborhood.

This is the only time that my Hotwire gamble did not pay off.

The problem in this case was that Heraklion isn’t a very big place. The airport is on the east side of the city, but on Hotwire the whole city is just one box; I couldn’t choose a part of the city as I could in Seoul. This made it more of a gamble, and in this case, I lost. The hotel (pictured at the top of this post) was far out on the west side of the city. The hotel was four-star and only cost €25 for the night, but the taxi to the airport the next day (no metro in Heraklion) cost €30.

One July, I attended a TBEX conference in Stockholm, a city that is notorious for its high-cost hotels. On Hotwire, I chose the area of the city that contained the conference venue, hoping I’d be walking distance from it. I knew, though, that Stockholm also has a comprehensive and efficient metro system, so it was okay if the hotel was further away.

I was very pleased to find a four-star single room for €55 a night, including an excellent breakfast. Every other site showed prices well above €100 a night, unless I booked a hostel. I don’t do hostels anymore!

This hotel, the Elite Hotel Stockholm Plaza, was particularly impressive. Except that the room was quite small, I would have rated it as a five-star: it was clean and quiet and thoughtfully appointed. The materials and decor in the room and public spaces were top quality, as was the included breakfast. At about a kilometer from the venue, I only needed to take the metro when I had my luggage with me.

On the way home from a family trip to Spain with our son and two foster kids, we decided we would stop for a night in Luxembourg City. Looking on Hotwire just the day before meant that we had few choices. My search only listed three hotels: a three-star, a four-star and a five-star. Surprisingly, the five-star, at €76 a night per room, cost less than the other two, so we chose that one. It was a Sofitel, and the rooms were very comfortable and spacious.

Have you ever used Hotwire to book a hotel? If you haven’t, but you decide to try it, you can use this link. And please let me know how it works out for you!