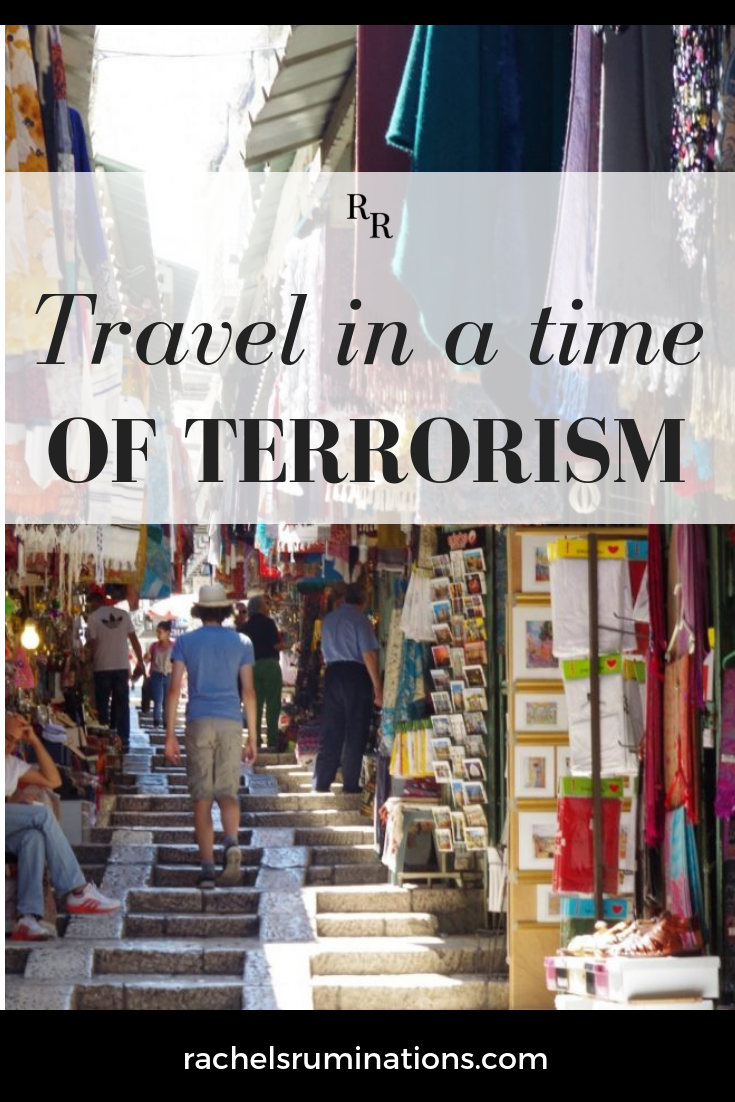 Note: I wrote this a couple of years ago, but the argument I make here still applies. Where I mention a terrorist attack from some time ago, just fill in whatever the most recent one was.

The attack on a Berlin Christmas market last week got me thinking about how terrorism affects travel and tourism.

Often, after an act of terrorism, the tourism industry in that location collapses. In the days and weeks following the attack, trips get cancelled. Sometimes individuals cancel out of fear. Sometimes airlines cancel, out of security concerns.

I suspect that Christmas markets all over Germany saw a drop in attendance in the last few days before Christmas. Some visitors, spooked by the attack, might cancel trips to Berlin altogether. On the scale of Germany’s tourism industry, it’ll only be a very small dip, I expect.

Egypt, on the other hand, is a good example of a tourist industry taking a much bigger hit. It has a history of terrorist attacks over the last twenty years or so. Each one leads to a dive in tourist numbers, followed by a very gradual increase, until the next attack.

The attack in October 2015, when a Russian plane full of tourists was shot down over the Sinai, led to the usual flurry of cancellations. Many airlines cancelled flights into or out of Sharm el-Sheikh, citing concerns about security there. Eventually, with assurances that the gaps in security had been repaired, many took up those flights again.

The most recent, as I revise this article, was in Giza in December 2018, when a tourist bus was the target. This is specifically intended to stop tourists from coming.

The tourist industry along the Red Sea, however, was much slower to recover. Hotels suffered in Sharm el-Sheikh especially, and some closed entirely, unable to survive the tourist drought. Many travelers still avoid Egypt, out of fear.

Because Egypt has experienced terrorist attacks in the past, tourists are much quicker to make that decision to stay away, and Egypt recovers more slowly than Germany (or Paris or Belgium, after their terrorist attacks).

It seems to me, though, that rather than avoiding a place where a terrorist attack has happened, we should do just the opposite: choose that location for our next vacation.

Why? You can look at this from two points of view: the political and the practical.

Political reasons to visit a past terrorism location

The intention of terrorism is expressed in its name: to terrorize people. By carrying out a large-scale attack, the terrorist wants to scare a nation into changing its ways.

If we change what we do, including travel, we are doing exactly what the terrorists want. We are helping the terrorists to undermine a country’s economy. By undermining the economy, we help undermine the government. A weak government can be replaced more easily by a different government that is more agreeable to the terrorists’ aims.

If we change what we do, including #travel, we do exactly what the terrorists want. Click To Tweet

Instead, we should resist the urge to cancel travel plans. I’d go further and say to those who are still in the planning stages that you should intentionally choose places where recent attacks have occurred. Go to Berlin, or Paris, or Brussels. Go to Egypt, or Israel, or Morocco.

More specifically, I recommend booking your travel and tours with local companies, not the big chains. The local tourism-related companies suffer the most when the industry takes a dive. The big international hotel chains, for example, might lose some money when bookings drop, but they have enough other hotels to cushion the blow. The owner of a single hotel might lose it all, and so would the hotel’s employees.

Booking travel to a recently-hit location sends a message to terrorists and those who support them. It says “You cannot change my plans. You won’t damage the economy of the country I am visiting because I’m still going to visit. You can’t scare me.”

Here are some related articles about choosing a destination:

Practical reasons to visit a past target of terrorism

Once you put aside the generalized fear that many of us feel when visiting a past terrorist target, such a place can offer some real advantages on a personal level. These are, essentially, the selfish reasons to visit such a place.

1. The cost of changing your plans

If you’ve already booked a trip, canceling can be expensive. Your cancellation insurance might cover some of the cost, but will it also cover planning a whole new trip at last-minute prices? If you don’t have cancellation insurance, or if the insurance company doesn’t see fear as a valid reason to cancel, you’ll be out of luck and out of money.

If you haven’t yet booked your vacation and flights are still operating to the location where the terrorist attack happened, the airlines are likely to have a lot of empty seats on those flights. While booking flights last minute is usually very expensive, this might be the moment to get a seat at a reasonable price.

2. Having a place to yourself

Once you’re in that location, you may very well have far fewer crowds than normal. This is bad for local business owners, but pleasant for you.

At the same time, you’re likely to have the best security measures in place, since vigilance goes up so much after an attack.

When we visited Egypt’s Red Sea coast a few weeks after a terrorist attack on a hotel at Taba in 2004, the area was struggling to save its tourist industry. Traveling with two small children, we spent a lovely week at a small family-owned hotel on the beach.

The hotel had about 20 rooms, but for most of the week we were the only visitors. That meant we had all the peace and quiet we wanted. The service was excellent everywhere we ate, and we had the beach more or less to ourselves. Spending our money there helped local businesses, and we had a vacation we remember fondly to this day.

A more extreme example was our visit to Israel in the summer of 2014. This was when Israel and the Palestinians in Gaza were busy lobbing rockets at each other. We had planned to attend a cousin’s bar mitzvah and decided not to cancel the trip, since most of the fighting was confined to Gaza and a small area of Israel where we had no intention of going. Because of the limited range of the rockets on both sides, flights operated as usual too.

I have never seen the Old City of Jerusalem so empty. Normally the streets of the Old City are packed with locals and tourists, and sightseeing involves shuffling along extremely narrow streets, weaving through the crowds. Now the shops were open as always, but we were practically alone, outside of a few Christian visitors following the Stations of the Cross along the Via Dolorosa.

Not a war zone

I’m not recommending that you travel in places that are in the midst of war. Despite the fact that Palmyra sounds fascinating, now is not the time to visit Syria. But a terrorist target is not the same as a war zone.

I am recommending that you avoid thinking the way that terrorists want you to think. Fear is natural after an attack. But fear isn’t necessarily rational. Thinking rationally, weighing up the risks and benefits, might lead you toward the terrorists’ target, rather than away.

If it eases your mind, stay away from crowded places like markets or sporting events. The chances, though, of you being involved in an attack are very small. Driving to the airport is probably riskier. And recent history has shown that you also might want to avoid crowded places in your own hometown.

Terrorism is meant, partly, to stop you from visiting. Don’t let the terrorists get their way.

Terrorism is meant, partly, to stop you from visiting. Don't let the terrorists get their way. #traveltips #travel Click To Tweet

Have you ever visited a place that’s been a target of terrorism? How was your experience there? Please tell us about it in the comments below.