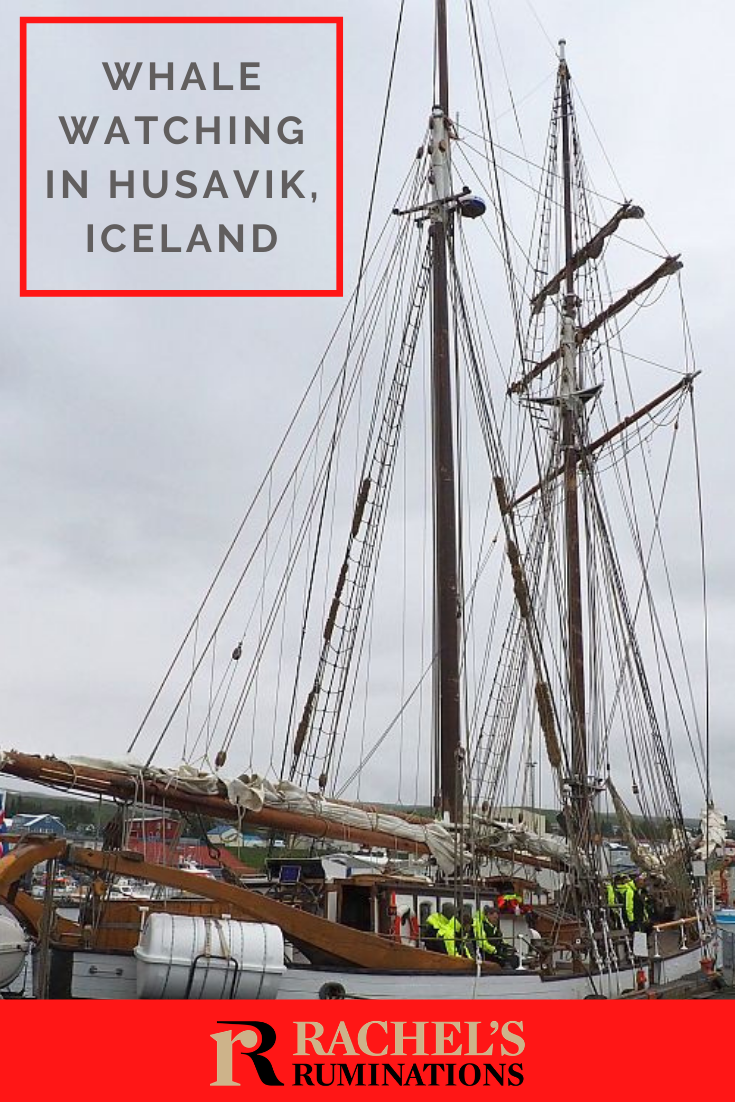 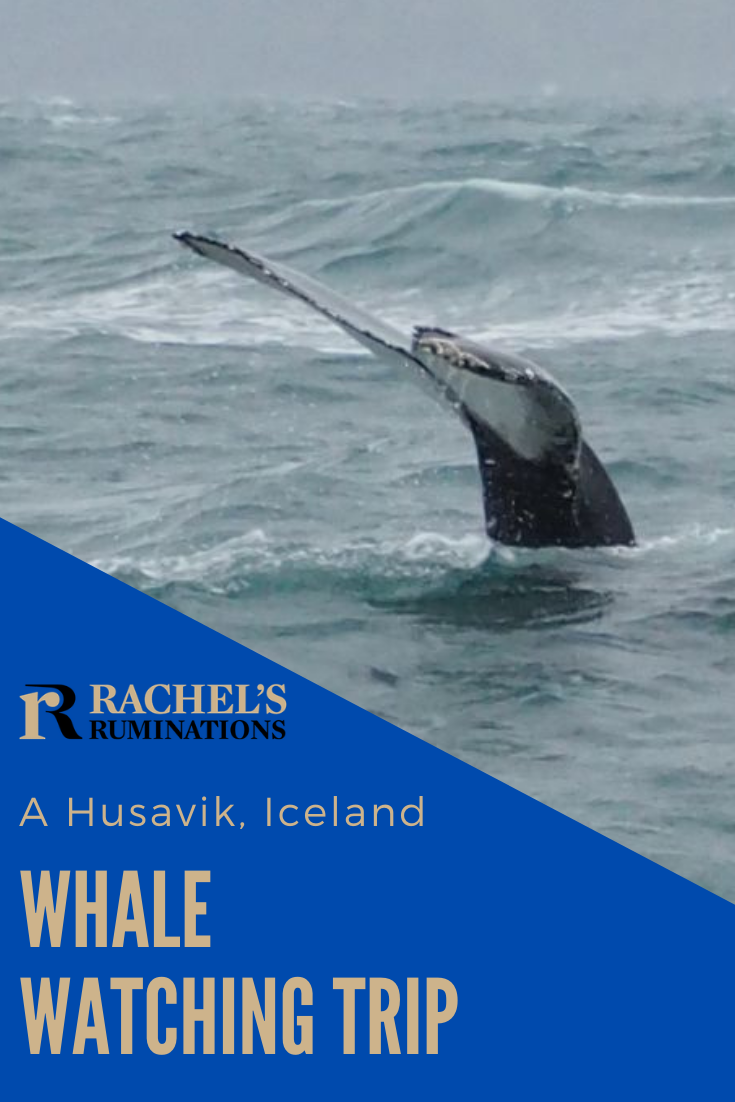 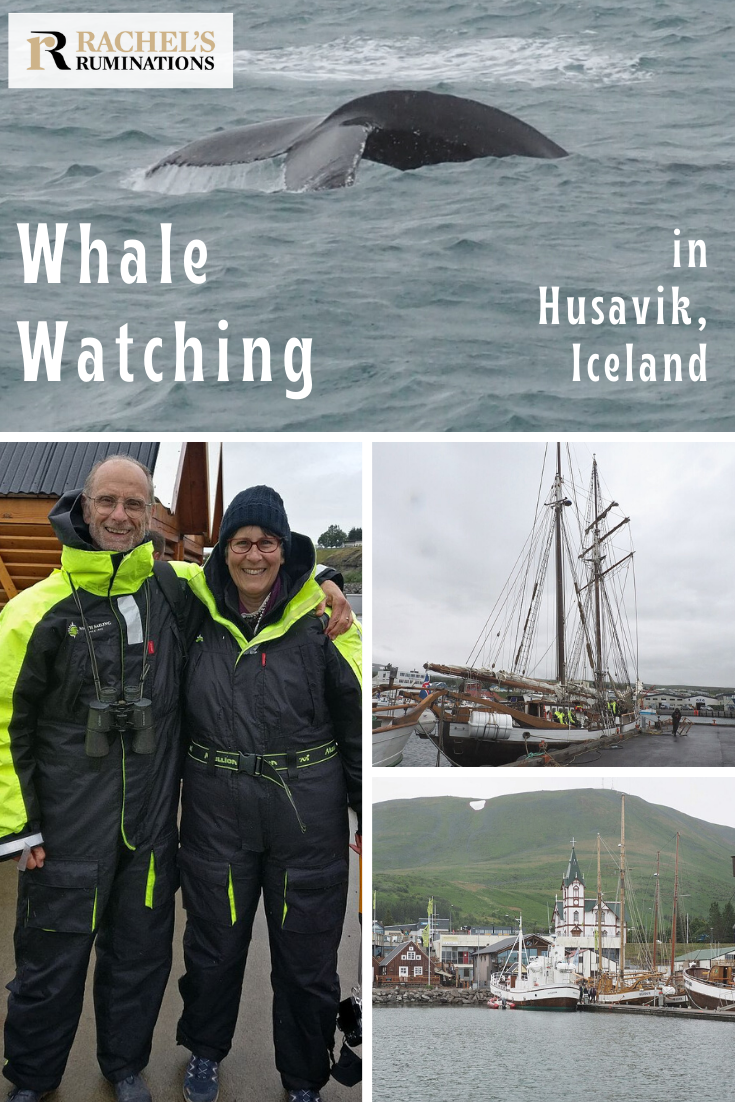 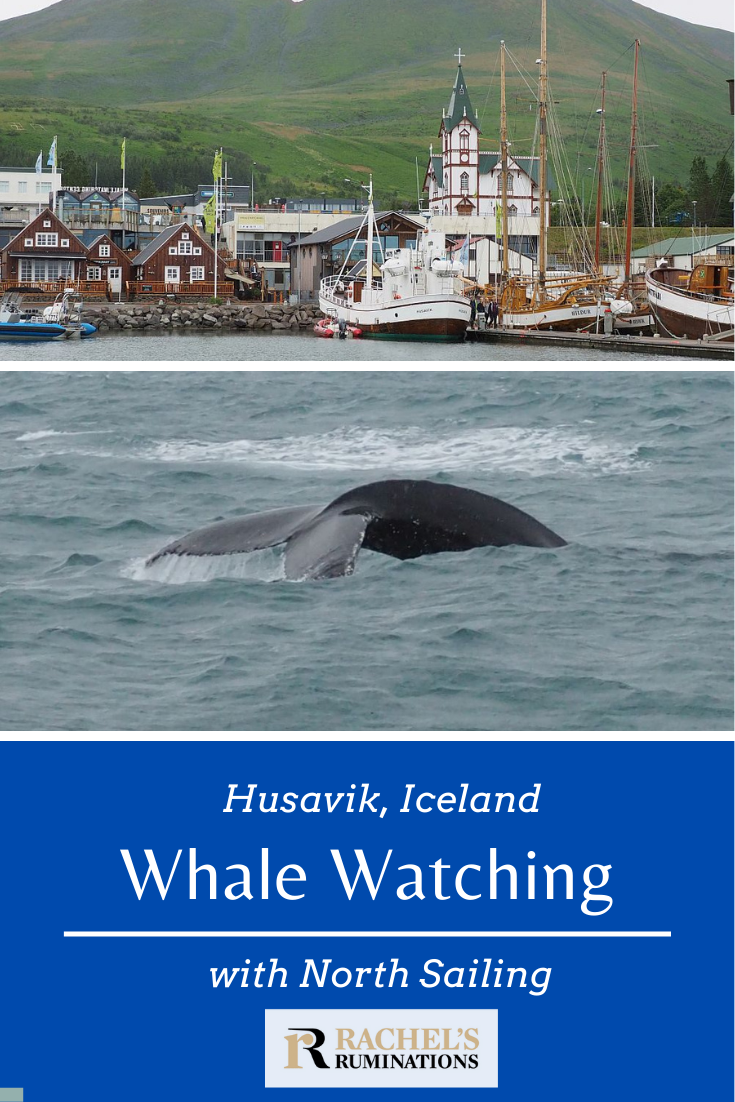 It was terrible weather the whole day my husband and I were in Húsavik, but this was the part of our Iceland trip I’d been looking forward to the most: whale-watching.

Husavik is a small town on the north coast of Iceland that depends on fishing and, more recently, tourism, particularly whale-watching. It has a pretty church dating to 1907 and an interesting whale museum.

Disclosure: This article contains affiliate links. If you make a purchase through one of the links, I will receive a small commission. This will not affect your price.

I’d chosen to book our whale-watching tour with North Sailing mostly because they use older wooden boats: both motor-driven and sailboats. What appealed to me was whale-watching from the deck of a multi-sailed wooden schooner.

In my imagination it was quiet: just the creaking of the wooden masts, the vibration of the sails, and the splash of the water as the hull cut through it. In that peaceful state, we’d be more likely to get nearer the whales and be awed by their size and grace. As an added bonus, I’d get to enjoy the beauty of a historical ship under sail.

Our experience was very different from this. Yet I’d do it again in a heartbeat.

Arriving at the appointed meeting point on a gray day – windy and with a misty rain – the staff of Northern Sail first fitted us out in black and bright yellow coveralls to wear over our clothes. These would keep us dry and warm. They also served as life vests, but without being quite as bulky.

We – I’d guess about fifteen or twenty passengers – boarded the ship, a schooner called the Opal, and set off from the calm of Husavik port into the windy and choppy Skjalfandi Bay.

North Sailing has a number of other ships, all of them traditional oaken boats originally used for fishing. Some are sailing ships (including three schooners), and the rest are motored fishing boats. The Opal was built in 1951 in Germany and carries ten sails on two masts. The company uses it for these whale-watching trips but also for week-long cruises in a fjord in Greenland.

Here are some other whale-watching tours out of Husavik.

On board, the staff issued us each with a bright orange raincoat to wear over the overalls. This was, we were told, to protect the overalls from getting too wet, which the people wearing them next wouldn’t appreciate. I suspected, though, that the real reason was to make us as visible as possible if we fell overboard.

It was a pretty unpleasant ride, once we left the protected port. We used the ship’s motor primarily, though eventually some of the other tourists helped the crew raise a single forward sail. The boat rose and fell over the waves and rocked side to side as well, plowing along at quite a speed into a light rain.

People got sick. Several of them established spots for themselves in the bow (front) of the ship, staying in one place for the whole journey and leaning over from time to time to puke.

A very enthusiastic tour guide from Spain kept up a monologue through a loudspeaker, telling us about the bay, about Husavik’s history, about the whales that come here every year, about their behavior, and so on. She started quite early in the three-hour trip to prepare us for the possibility that we would not actually get to see a whale.

Apparently there is no way to know where or when a whale will appear. It’s not like, for example, a safari when you can bet the animals will return to their watering hole. Whales can go anywhere. And when they deep-dive, it can be ten minutes and some distance before they surface again. You can tell when a whale is diving deep when you see its tail go vertical.

For a look at a more pleasant experience of whale-watching with North Sailing – a motorboat on a day with much better weather – read my friend Cindy’s review.

Eventually, we did spot a whale: a humpbacked whale. It was a distance away, and the misty rain didn’t help us see it. Nor did the choppy water make it easy to photograph it.

Sure enough, as we’d been warned, it dove deep. We waited and watched and, eventually, we saw it again. This happened a few times, and the ship’s crew made a valiant effort to keep us near to where it might come up again.

According to the guide, we only saw one single whale about four times, though our last sighting, at a longer distance, might have been a different whale.

When it seemed clear that no more whales would show up, we turned back toward the port, and the guide announced refreshments: a hot chocolate or some sort of alcohol, and a cinnamon roll.

By this time in the journey, though, I was feeling a bit ill as well. It wasn’t actually because of the ship’s movement. I’ve never been very prone to seasickness. It was because of the other people who were vomiting over the side: nothing makes me nauseous as quickly as the smell and/or sight of someone else’s vomit.

For most of the trip this wasn’t a problem. The people struggling with seasickness were facing out, away from where I was sitting on a bench. They threw up over the side into the ocean. However, one young woman was standing quite near me, and by the end of the trip she started missing: she puked onto the ship’s railing rather than aiming it over the side. I can’t really blame her; she must have been exhausted by then, and the boat was rocking quite a lot in the wind and rain.

We were, of course, welcome to go below, where we’d be warmer and out of the rain. The problem for us was that we were afraid we’d miss possible whale sightings, and, for the people who were seasick, going below was not an option. The best way to deal with seasickness is to stay outside, in the front of the boat, and keep your eyes on the horizon.

You might also enjoy my other articles about Iceland:

We returned to Husavik harbor, enjoying those last few minutes of cruising along on calm water. I think it’s safe to say that everyone was relieved to set food on dry land.

None of this, by the way, is any kind of criticism of North Sailing. They were calm and patient and knowledgeable. I’d happily take another trip with them. My friend Cindy of Exploration Vacation told me she took a tour with the same company (but with a motorized boat) and had a completely different experience: a smooth ride in good weather.

My advice about Husavik whale watching

If I could plan this trip again, I’d arrange things so that we had more days in the area. That would allow us, if it wasn’t too booked up, to buy tickets for a day when the weather was expected to be decent: no rain and less wind.

Another tip, if you take a Husavik whale-watching tour: even in the middle of the summer, take a warm hat and gloves with you. You might need them, as we did. Spending several hours outside in a light rain will chill you, even in heavy waterproof overalls.

Also, if you tend to seasickness, take the appropriate medication ahead of time, and don’t eat before departure. Just sip some water.