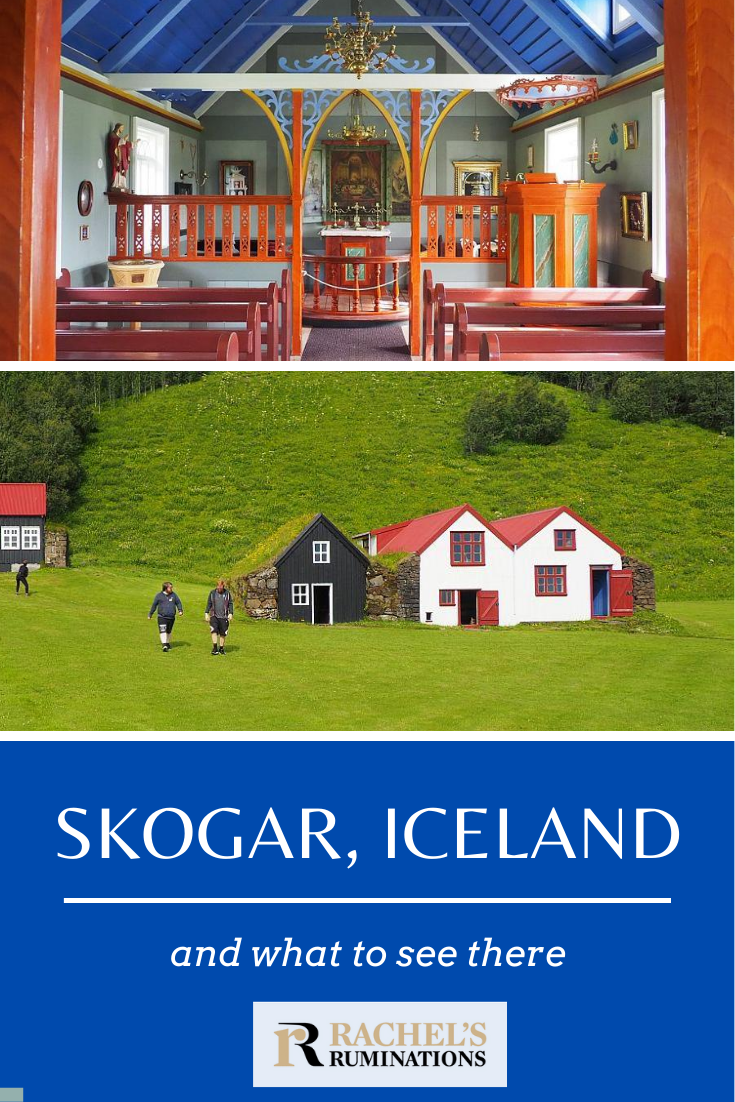 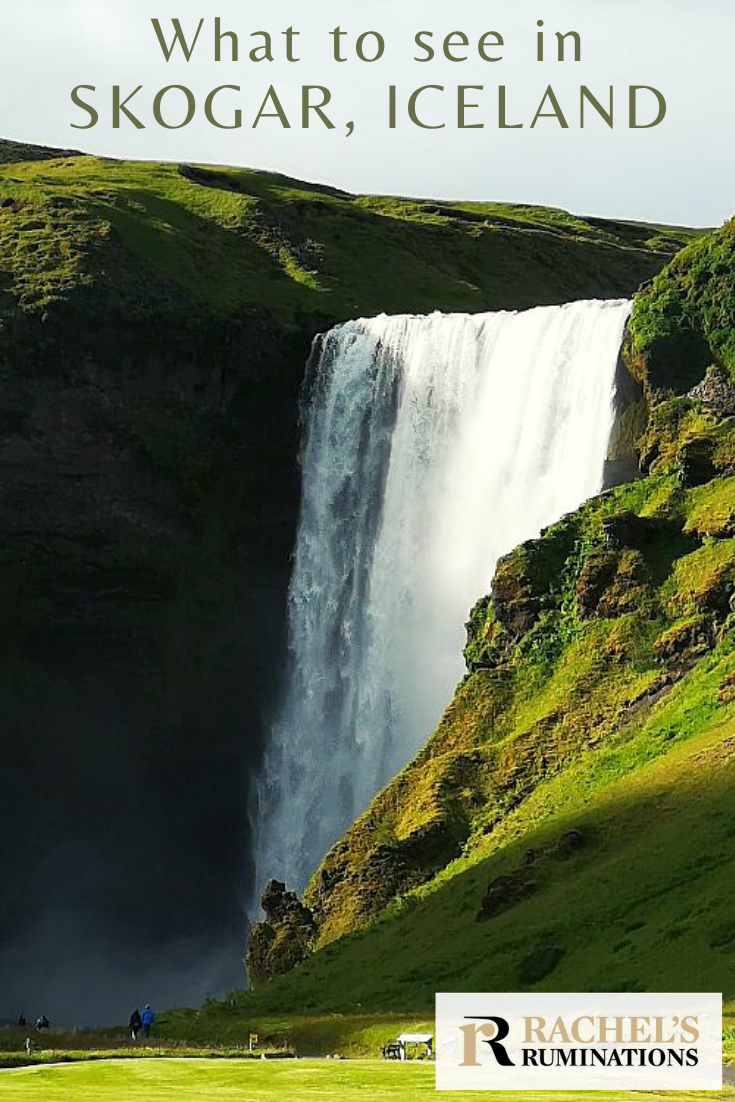 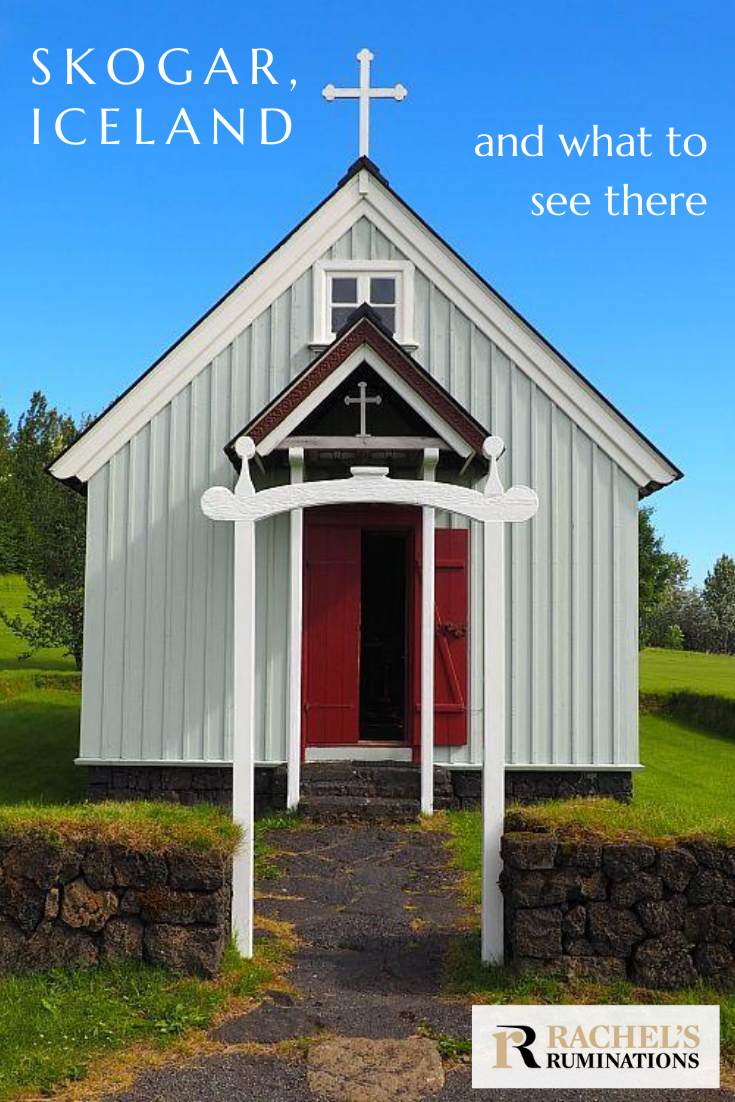 When my husband, Albert, and I stopped at Skogar, Iceland, we only intended to see one thing: Skogafoss waterfall. We found much more, though.

Disclosure: This article contains affiliate links. If you book accommodations through one of them, I will receive a small commission. This will not affect your price.

This is one of the most popular waterfalls in Iceland; it’s pretty and easy to get to, right on the main ring road (route 1) around Iceland.

Skogafoss waterfall is wide (15-25 meters) and long (about 60 meters), visible from the ring road. It has a simple, straightforward elegance. With the quantity of water involved, it throws up a lot of spray.

To its right is a long stairway up the hill, allowing visitors to walk up to view the waterfall from above. You can see the platform in the top right of the photo above. We enjoyed that view, but the more impressive view is from the waterfall’s foot.

If you’re curious about our experience traveling to Iceland during the pandemic, you can read about it here.

Albert and I have peculiarities that occasionally drive each other crazy when we travel. I get exasperated by his birdwatching. He even watches as he’s driving, which terrifies me. When we stop and he’s busy peering through his binoculars at the birds, I just get bored.

To be fair, this has gotten better. Now that I’m trying to improve my photography, I spend his birdwatching time trying to capture sharp pictures of the birds. Mostly, I fail, but at least it gives me something to do.

What exasperates him is my enjoyment of obscure local museums. These are very often full of all sorts of stuff that could easily be termed “junk.” I think that often the items are collections by local people. When they pass away, their heirs don’t know what to do with Uncle Abe’s rock collection or Auntie May’s antique butter churns. What to do? Donate it to the local museum!

But I enjoy these museums. I never take long in them, just skimming the displays. I like the serendipity of moving from a collection of toy cars to a batch of taxidermied animals to some local handicraft collection and so on. And I learn a little bit about what that place values.

Anyway, this is all a roundabout way of saying that I also wanted to see the Skogar Museum. Albert agreed, rather reluctantly.

In this case, even Albert was glad we did.

Skogar Museum has three parts: a folk museum, an open-air museum, and a technology museum.

The folk part of Skogar Museum, in the main building, was everything I describe above. It had, for example, a collection of bedboards. Traditional beds were small and shared. Bedboards were used to keep the occupants from falling out. During the day, the beds were used for sitting, so the bedboards could be removed and placed elsewhere. They’re often decoratively carved, which makes them worth preserving as pieces of history.

There was an agricultural implements section, sailboats, information on fishing and fishing equipment, a collection of shells, another of bird skeletons, a taxidermy exhibit, a huge collection of insects, wood carvings, traditional clothing…. You get the idea.

The most interesting single piece in this part of the museum, I think, was related to Skogafoss waterfall. We had read the story of Þrasi Þórolfsson on a sign at the waterfall. The story goes that he was the first settler at Skogar around 900 AD. He placed a chest of gold behind the waterfall in a way that allowed it to be visible but hard to reach. People tried to pull the chest out from the falls, including a time when someone tied a rope to a ring on the chest to pull it out. Unfortunately, the chest stayed put, but the ring tore off.

The ring was used on the front door of the local church until 1890. It’s now in the Skogar Museum. Supposedly the chest of gold is still there somewhere behind Skogafoss.

Almost everything in the museum has a clear label, by the way, explaining what it is and giving information about its use or origin. Some items have English translations of their labels, but, rather randomly, some have German or French instead.

While you’re in south Iceland, make sure to go to Heimaey island, off the south coast. You can read about it here: Things to do in Heimaey island, Vestmannaeyjar, Iceland. And if you are going to be in north Iceland, you might want to consider going whale-watching in Husavik.

The open-air part of Skogar Museum is small, consisting of only a few structures. Nevertheless, it’s worth some time.

First we came to a row of turf houses, or at least it looks like more than one house on the outside. Actually it was a single farmhouse. Inside is a warren of rooms: one for livestock, a pantry, a storeroom, a parlor, a kitchen and a communal room called a baðstofa.

Beds line the sides of the baðstofa, each about the size of a single bed. Commonly, two or more people would sleep in each; with no heating, sharing body heat was important. This was where bedboards came in handy.

The fully-furnished rooms give a really clear picture of how hard this life must have been.

The wooden furniture, by the way, was mostly made from driftwood, since so little wood grew in Iceland.

(An interesting Iceland fact. When the Vikings arrived, there were forests, mostly beech trees. Most of these got cut down in the ensuing centuries, used for fuel and building materials. That’s why driftwood and, later, imported wood, became important.)

Our next stop was a charming little church. The exterior is new, but all of the inside is original, taken from a church in a nearby town dating to 1879. Some parts are older, like the bells (1600 and 1742) and the altarpiece (1768) and other furnishings.

Nearby is a one-room schoolhouse, moved here from Dyrholar, built in 1901. It always amazes me how universal schoolrooms were (and still are). This looks just like schoolrooms I’ve seen in many other parts of the world. Apparently it was in use until 1968 and was moved here later.

Next we saw another farmhouse dating to 1919. This one is less purely a turf house: the roofs are more modern, but the side walls are still turf. The tradition in this region was to keep the livestock on the ground floor and to live upstairs, so the ground-floor rooms have low ceilings, rough stone floors, and exposed turf walls. Upstairs, though, is designed for humans.

These were not poor people, judging by the level of comfort in their parlor and the relatively modern tools in their kitchen. Like the fully-turf house, this one has a baðstofa upstairs. People lived in this house until 1970.

The last structure in the open-air section of the museum is another house, moved here from another town (See the picture above: the house on the left.). Dating to 1878, this one is wooden, and I was surprised to read that it was made entirely from driftwood. People lived in it until 1974, and it was clearly a more upper-income family, judging by the quality of the furnishings and the amount of space.

The third part of the museum is in a much bigger, warehouse-type building. It is crammed with all sorts of objects much like the folk museum, but larger scale. Many cars and other vehicles are on display, from a Model T Ford to some of the earliest work machines: half-track vehicles, snowmobiles, road construction equipment. While I’ve seen car collections before, I’ve never seen the forerunners of things like bulldozers, steam shovels and snowplows.

It has all sorts of other collections too. We saw a series of historical telephones and various radio and mobile phone equipment. Jeeps, trucks, fire engines: you name it; this collection has it. The big bright space is pleasant and, on the day we visited, a jazz performance was going on in the museum café, lending a musical background to our wanderings.

After exploring the museum, we went in search of a “hidden” waterfall we had heard about from another traveler. We asked at the museum reception and received simple instructions: walk past the technology part of the museum and you’ll see a sign. Follow the path, climb the turnstile, and keep walking.

Tall (perhaps 30-40 meters) and narrow, falling picturesquely into a canyon, Kvernufoss waterfall is lovely. We were happy to see that we had it almost to ourselves. One other family arrived after us, but that was it.

It was a relaxed way to end our day: a stroll along the path through the green valley, then sitting and admiring the beauty of this waterfall. Albert continued along the path and was able to get almost right behind the falling water and see it from behind. Even though it is a smaller waterfall, I liked Kvernufoss better than Skagafoss.

Our quick stop in Skogar to see a waterfall and have a peek at a folk museum turned into several hours in total, and definitely worth the time.

Skogar was just one stop in an entire circuit around Iceland that took us 3 weeks. Read 3-week Iceland itinerary: The best Iceland road trip to learn more about what to see and do in Iceland.

Where to stay in Skogar, Iceland

We stayed at Mountain Queen Angelica, about three kilometers away from Skogar. We had a very comfortable room with a pretty view, and the whole place was homey and welcoming and friendly. Definitely recommended.

If you’re looking for a place to stay in Skogar itself, use the map below to look at your options: