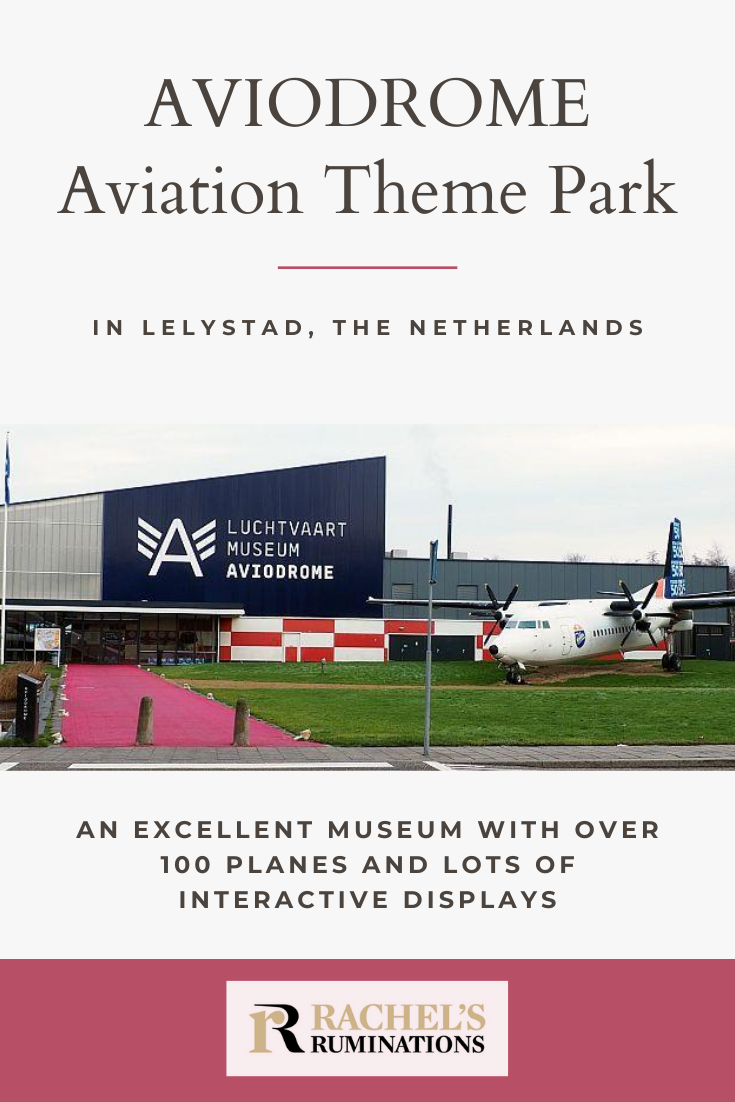 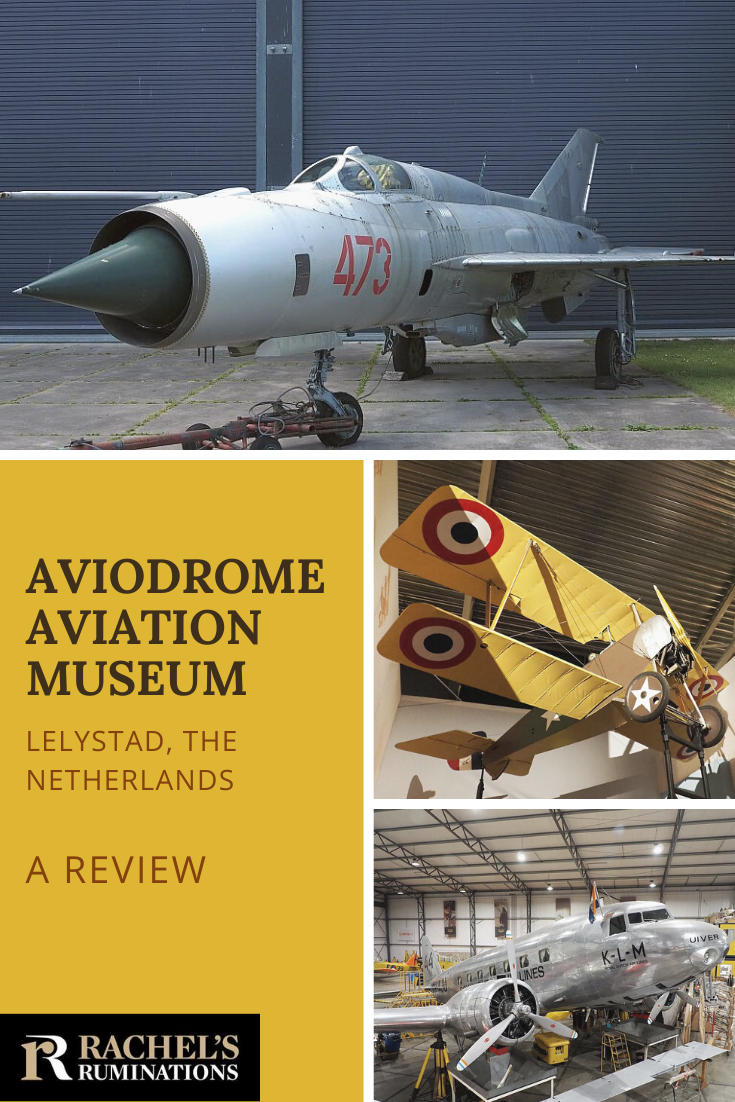 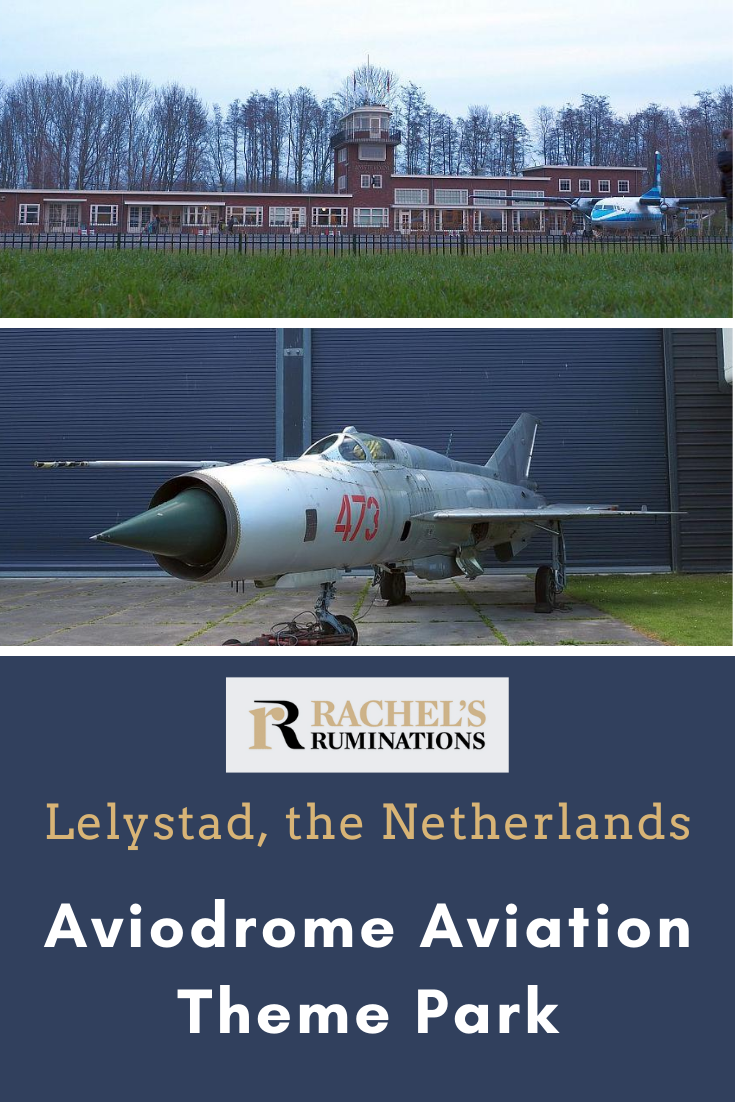 For a fearful flyer like me, airplanes hold a certain fascination. It can seem an absolute miracle that something so big and heavy can actually get off the ground.

And then, of course, there are flying enthusiasts. Those fortunate people actually enjoy their time aloft, taking pictures out the window or just dropping off to sleep the moment they sit down. I envy them.

Either type – fearful flyer or aviation fan – will love a visit to the Aviodrome aviation theme park, a museum of flight at Lelystad Airport in the Netherlands.

Disclosure: This article contains affiliate links. If you click on one and spend money, I will receive a small commission on what you spend. It will not raise your price.

An airplane collection in a hangar

The central focus of Aviodrome Lelystad is its collection of over 100 vintage airplanes, from a replica of a Wright flyer to a retired Boeing 747, and everything in between.

Arranged more or less chronologically, the indoor exhibition – housed in a large hangar at Lelystad Airport – follows a wandering path around and sometimes under some beautifully restored pieces.

World War I planes that appear to be built of nothing but canvas and wire hang from the ceiling. Seeing these, I felt awe at the bravery of anyone who flew in them.

Later planes follow the development of the technology, particularly focusing on Dutch aviation. Fokker planes from all periods are part of the Aviodrome collection, from an original Fokker Spin (1910) to a Fokker 100 from the 1980s.

KLM is well-represented as a company, with its Douglas, Boeing, and Lockheed aircraft of various sorts, several of them labeled as “The Flying Dutchman.” One of the earliest KLM passenger planes illustrates how primitive these contraptions were: they had no pressurization and passengers had to use a box with a seat as a toilet.

Visitors can board a more familiar kind of plane, a Douglas DC-3. While the passenger section isn’t that different from passenger planes today – but with larger, more comfortable seats and more leg room – the cockpit still looks very improvisational. The navigator could even use a low-tech option of peering through a skylight to orient himself by the stars.

Each airplane has a sign in Dutch with its history and its specs, for the real aviation geeks. The main points are summarized in English as well.

More than airplanes at Aviodrome Lelystad

Here and there among the airplanes stand a variety of other displays, often interactive. You can steer a model plane in a wind tunnel to learn how a plane banks. You can experience the technological problem of attaching a machine gun to a plane in World War I (It would hit the propeller in front!) and how that problem was solved through synchronizing the gun with the rotation of the propeller. Visitors can take the pilot’s seat in a flight simulator and videos illustrate historical moments in aviation as well.

The collection includes several vintage cars, and also quite a lot of collectibles related to flying, like uniforms and branded items from KLM and other Dutch companies. Commemorative plates mark noteworthy events in Dutch aviation history: for example, the speed record set in 1933 from Amsterdam to Batavia (now called Jakarta). With four crew members in a Fokker FXVIII full of Christmas mail, the flight lasted four days, four hours and 40 minutes, with brief stops for refueling.

A small upstairs section looks at space flight, mostly focusing on the contributions of the Dutch.

A charming 4-D film (3-D glasses plus other effects like wind and light rain) tells the story of two children and their fantasies about being hero pilots. While the dialogue is in Dutch, it doesn’t matter. It would nevertheless be fun for children, since it’s full of flying action and effects.

The main lobby of the Aviodrome, besides the reception desk, has a play space decorated on a baggage-handling theme for kids to climb around in. A café serves pretty standard fast food, and a shop offers various aviation-themed books and toys.

If you are planning to stay in Lelystad, here are some hotels to consider.

Outdoors are more airplanes. A Boeing 747, for example, looms next to the hangar. Exploring it was, for me, a bit of a trip down memory lane, but it is also interesting in that this was a “combo” version of the plane. That means that the back half was used for cargo while the front was used for passengers. Seeing that unfurnished section gives a much clearer idea of just how big the plane is.

A small Russian military plane (an Antonov AN-2 Antek) is open so that you can sit in the pilot’s seat and pretend to be a fighter pilot. Flight-themed playground equipment keeps kids happy as well.

A number of other airplanes, parked outside, both military and civilian, can’t be boarded, but are nevertheless worth seeing. A Mikoyan-Gurevich MIG-21PFM, for example, used by the East German air force, looks fiercely aerodynamic. A few other vintage planes lend a certain nostalgia to the space outside.

Further away from the main hangar, an elegant brick building drew my eye: the original terminal from Schiphol airport, dating from 1928, was taken apart and reassembled here. Inside, it offers a flash from a past when air travel was only for the elite. A chalkboard shows departing flights, including the names of the pilots.

An elegant café allowed passengers to watch the planes take off and land. Airlines had simple offices behind their respective check-in counters. The control tower is simply a room just a few flights up. Outside, a Fokker Friendship stands, a type that would have been used in the terminal’s heyday. It all hearkens back to a simpler (and more dangerous) period of aviation.

Another, more prosaic, building is a simple hangar, called T2. This is where the real business of Aviodrome Lelystad takes place: hobbyist volunteers restoring vintage planes. The space is strewn with airplanes in varying states of repair (and disrepair), ranging from ones that look airworthy to others that lie in scattered pieces on the floor. It smells of machinery and engine grease.

Visitors cannot roam among these planes. Instead, a walkway a flight up above the work floor allows an overview, but with few explanatory signs you’d have to be an airplane afficionado to understand the renovations taking place. Basically, this is a workplace, and the volunteers tolerate but generally ignore visitors.

In the end, it seemed to me that Aviodrome Lelystad’s hangar is actually too small for the sheer number of airplanes and other items on display. It means they are sometimes practically (or literally) on top of each other. They’ve done an excellent job, though, on making the best of it and using dramatic lighting effectively.

Another negative point is that the space exploration section is rather underwhelming compared to the rest. I can see why, and I don’t think they should expand it. There just isn’t room.

If you visit without children, come armed with a certain amount of tolerance. Aviodrome’s designation as an aviation theme park means it’s a lot of fun for kids, and kids having fun can make a lot of noise.

Lelystad Airport, owned by Schiphol Group, is a general aviation airport at the moment, handling private aircraft, flying lessons, and similar small-scale uses. It has a new terminal and an extended runway to accommodate larger aircraft like Boeing 737s and Airbus A320s. Negotiations have been going on for years over whether to let the airport open to commercial flights. When/if it does, it will be able to handle up to 45,000 flights a year.

Schiphol Airport has reached its legal limit of 500,000 flights per year and Schiphol Group upgraded Lelystad Airport to enable it to expand past that limit. Budget airlines like Transavia and Wizz Air have shown interest. So has Ryanair, but a complicated plan involving trading slots at Schiphol for slots at Lelystad would shut them out, so there’s been some legal wrangling.

Not surprisingly, all sorts of obstacles have prevented it from opening, besides the legal issues: concerns about noise standards and objections about the environmental consequences, including increased carbon emissions.

Because of the Covid-19 pandemic, the opening has been delayed again: Lelystad Airport is now slated to open to vacation flights starting on November 1, 2021. I’m not holding my breath.

I bring up the whole controversy over Lelystad Airport because I assume that it will affect Aviodrome museum. Right now there’s plenty of parking and, while Aviodrome is certainly popular, it’s not overcrowded. I wonder how it will be affected by commercial flights operating from there.

On the other hand, if you are arriving or leaving from Lelystad Airport, this would be a great way to spend some time before or after a flight, with the added advantage of having a view on the runway from the control tower of the old Schiphol terminal.

If you visit with kids, expect to spend a lot of time here. They’ll enjoy the hands-on displays illustrating aspects of aviation, and they’ll completely exhaust themselves in the playground outside, which is not your everyday playground.

I will certainly update this article if/when the airport opens to commercial flights. In the meantime, here’s the practical information:

Aviodrome Aviation Theme Park, Lelystad: Pelikaanweg 50 at Lelystad Airport. The drive is about 45 minutes from Amsterdam: take the A1 toward Amersfoort/Almere, then take the A6 to Lelystad Harderwijk, exit at Lelystad N302 and take a left at the light. Then just follow the signs to the airport. Parking at P2. Or take the train to Lelystad or Harderwijk Stations. From either station you can take bus 148. Get off at Vliegveld/Eendenweg. Website.