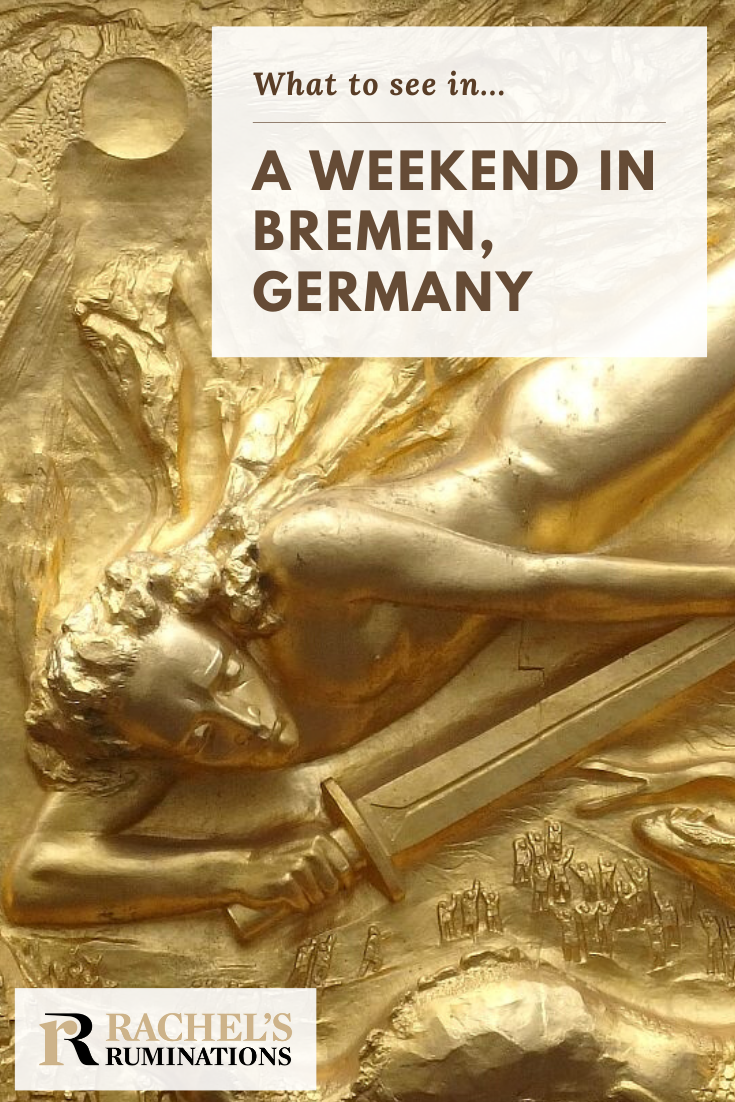 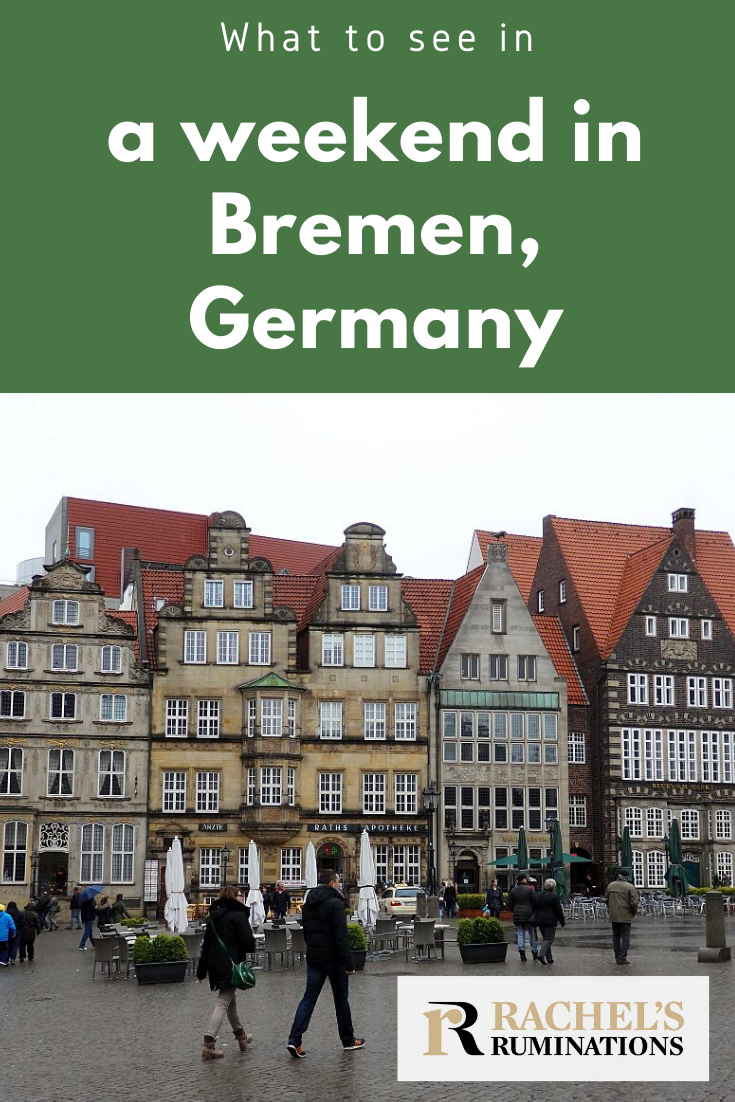 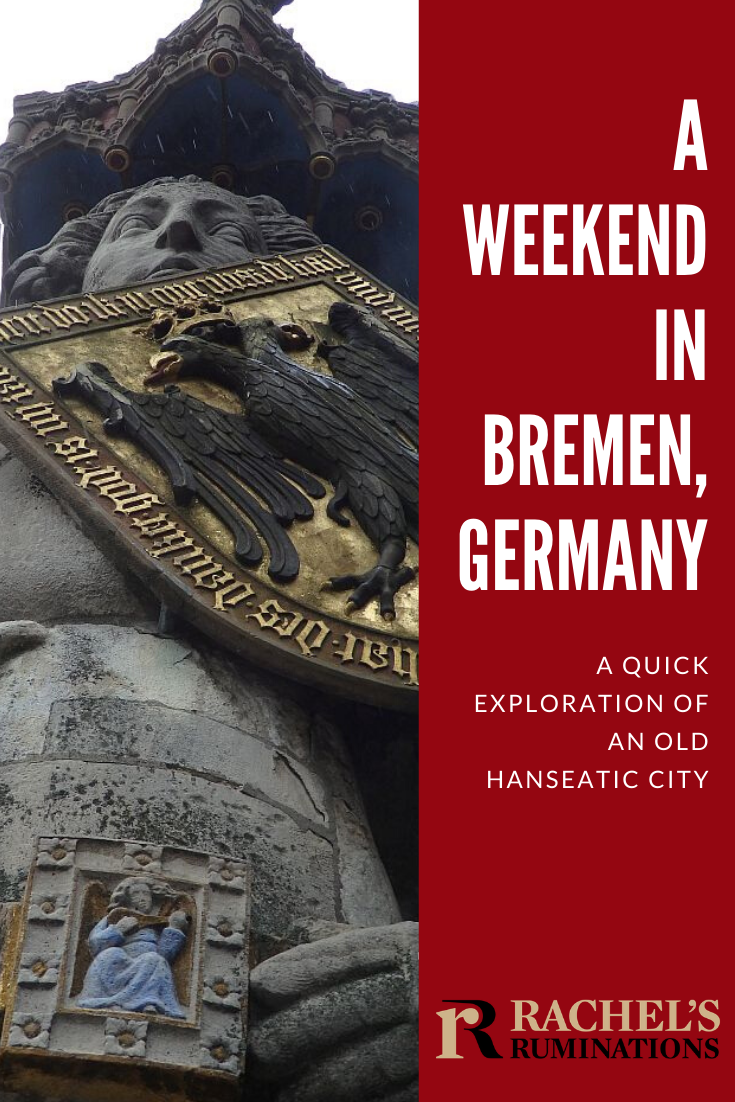 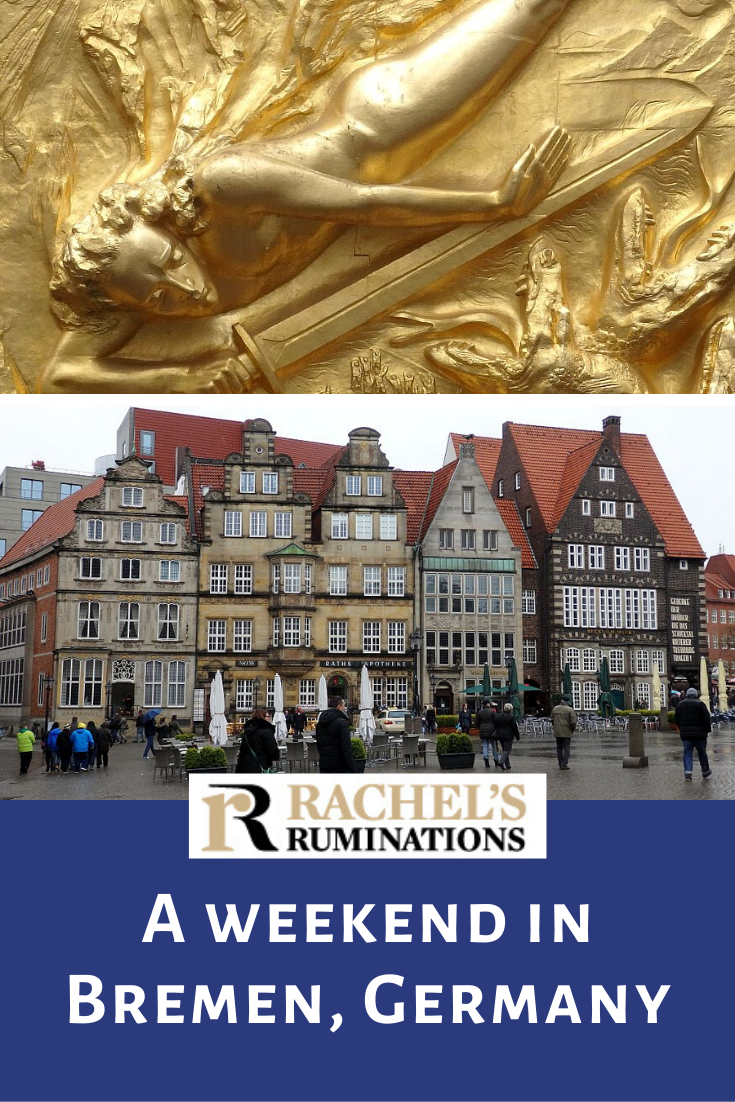 My husband and I recently spent a weekend in Bremen, which is about a two-hour trip from home.

We didn’t choose Bremen because of anything in particular except that we wanted a weekend away, and we also felt we needed to be close enough to get home quickly if anything went wrong with the three teenagers we were leaving behind. At least I wanted to be close; my husband didn’t agree that it was necessary.

I had glimpsed a bit of Bremen on a school trip a few years before, and particularly wanted to explore the Schnoor neighborhood more thoroughly. So we went.

The main tourist draws in Bremen are in the Altstadt area. Dominated by St Petri Dom cathedral, the marketplace at the center of town is home to a number of lovely buildings from the period when Bremen owed its prosperity to being a Hanseatic League member.

If you’re interested in Hanseatic League history, here are some other articles about Hanseatic cities:

The Rathaus is the old city hall, and, together with the Roland statue in front of it, is a UNESCO World Heritage Site. It was built in the early 15th century and renovated in Renaissance style in the 17th century. Unfortunately, when we visited, a mayor had recently died, so the Rathaus was closed to visitors. Nevertheless, the ornamentation on the exterior is intricate and worth some study.

The Roland statue in front of the Rathaus is over five meters tall and is the largest of 26 such statues in Germany. Roland, apparently, is a symbol of market rights and freedoms, so again it’s linked to Bremen’s status in the Hanseatic League.

The other famous Bremen statue stands next to the Rathaus; it depicts a donkey with a dog, a cat and a rooster on its back, illustrating a Grimm fairy tale called “The Town Musicians of Bremen.” I wrote about the statue and the story in this article.

A row of buildings nearby on Marktplatz is also an indication of what much of the Altstadt must have looked like before the war.

Atop the entrance to the very short Böttcherstraße hangs a shining bas-relief called Lichtbringer (Bringer of Light) that was dedicated to Hitler by Ludwig Roselius, the man responsible for developing the whole street in the 1920s. According to Wikipedia, the font of all knowledge, Hitler rejected the artwork as “degenerate.”

A stroll down Böttcherstraße shows some interesting architectural contrasts. The 1920s-era expressionist-style buildings (Hitler, apparently, did not like those either.) were restored after bombing in the war. One building, though, was built in 1588 and is now the Ludwig Roselius Museum. Since we only had the weekend in Bremen, we didn’t go inside, but it houses Roselius’s personal art collection.

The flowing organic shapes of the expressionist buildings seemed to me attractive and playful, and respectful of Roselius’s older building in their midst. One of these newer buildings is home to the Paula Modersohn-Becker-Haus, named after the artist it exhibits.

On top of the Glockenspiel House is a set of 30 Meissen porcelain bells which are played three times a day.

If the weather is good, a walk along the Weser River is pleasant. On Saturdays in the warmer months a flea market takes place, which combines well with a promenade along the water. Kiosks offer food and, especially, beer to keep you going. You’ll be charged an extra euro for the glass, which you get back when you return it, but why not keep it as a souvenir?

Another option in the warmer months is to take a boat ride along the river or farther afield if the port of Bremerhaven interests you.

My favorite section of Bremen is Schnoor. This is the oldest surviving district of Bremen: only a couple of blocks, but lined with houses from the 15th to 18th centuries. While these were originally poor fishermen’s homes, nowadays it’s a pedestrian shopping district with lots of interesting little shops, galleries and cafés.

This one-hour walking tour covers only the Schnoor section of town.

If you look at a map of Bremen, you’ll see that the old center of town is bordered on one side by the Weser River and on the other by a zigzag-shaped canal called the Wallgraben, the old city moat.

The points of the zigzag—what remains of the old city defensive walls—have been landscaped into beautiful gardens called the Wallanlagen. We walked from the Schnoor section around the center of the city through this lovely park as far as the unexpected Muhle am Wall, a Dutch windmill. This one was built in 1898 to replace several earlier ones, but apparently the Wallanlagen had 15 windmills in the 18th century. On a sunnier day we might have stopped here for a drink in the mill’s outdoor café, but as it was threatening rain, we gave up walking for the day and headed back to our hotel.

This two-hour walking tour of Bremen gives an overview of the sights and starts at the Glockenspiel house.

While there is certainly more to see in Bremen—several more old churches, the Bohemian Viertal section, and quite a few museums—we felt that our weekend in Bremen was just enough for a little taste of the main tourist sights. Walking from sight to sight, we enjoyed ourselves, despite overcast skies and occasional rain.

And, in case you were wondering, we were happy to find that the teenagers we left at home didn’t “break the place” or cause any trouble at all!

Have you ever visited Bremen? What would you recommend doing there on a longer visit?

If you’re planning a weekend in Bremen, book your hotel through this booking.com link.

Other museums in Bremen

These museums all work together with the two mentioned in the article above to reduce pricing if you go to more than one of them in a day. Make sure to keep your ticket and ask at the next museum.

By car, Bremen is about an hour and a half southwest of Hamburg. Train will get you there more quickly than that.