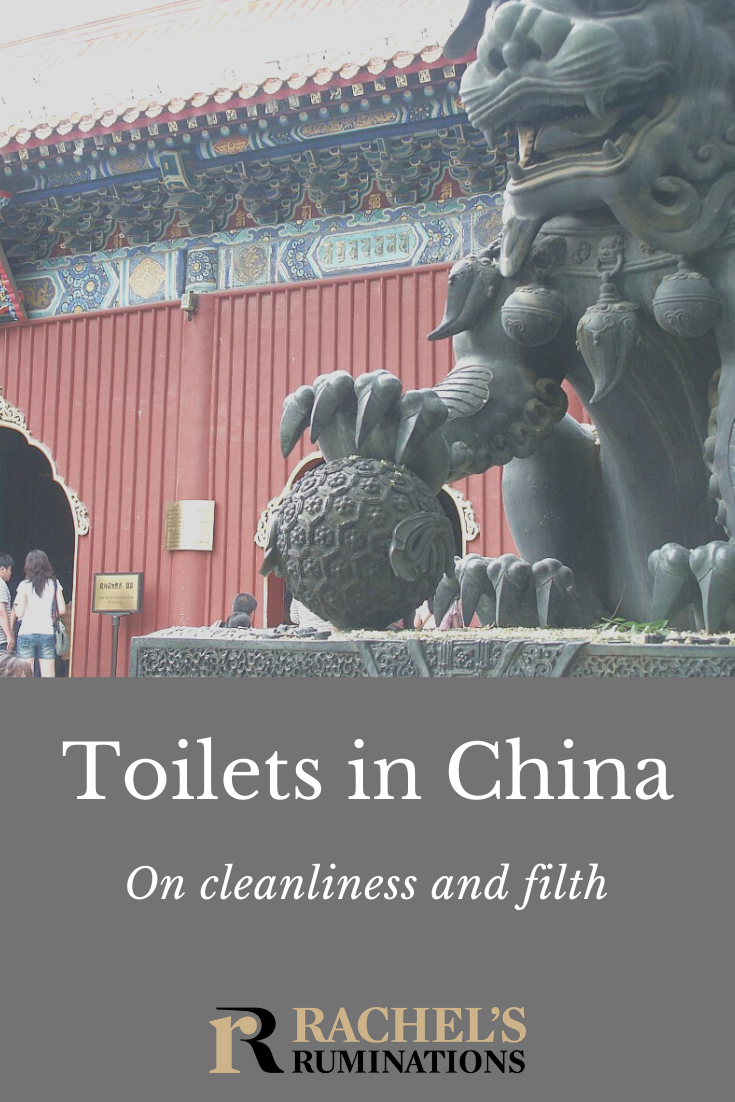 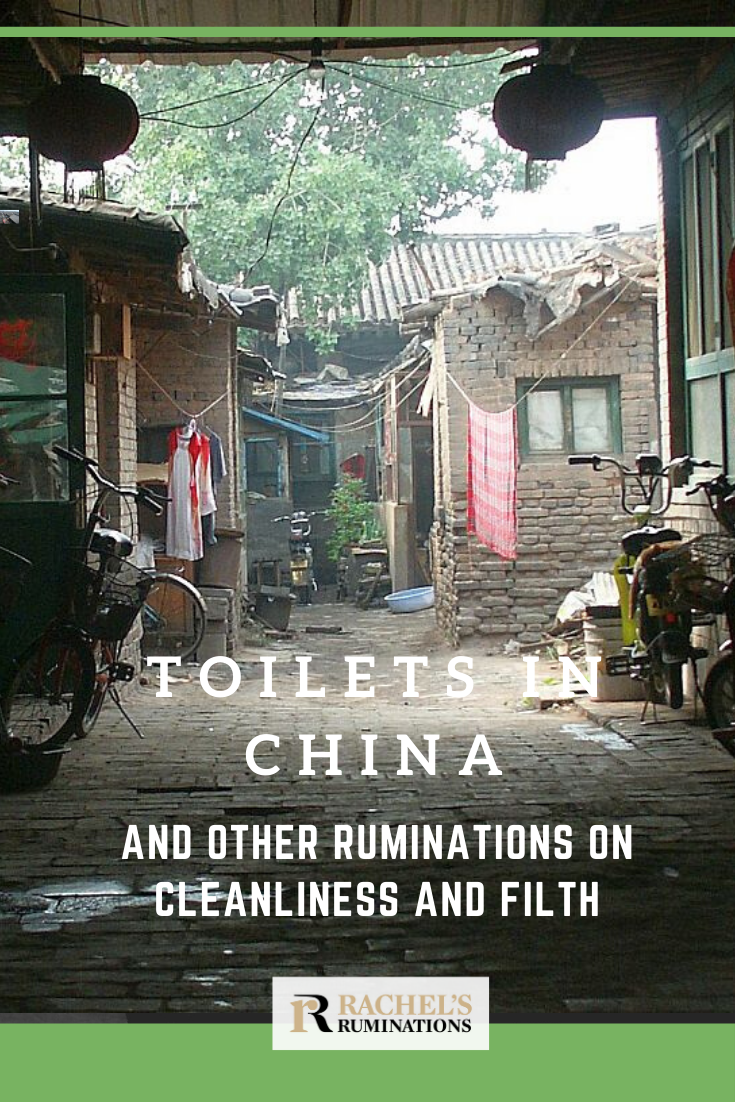 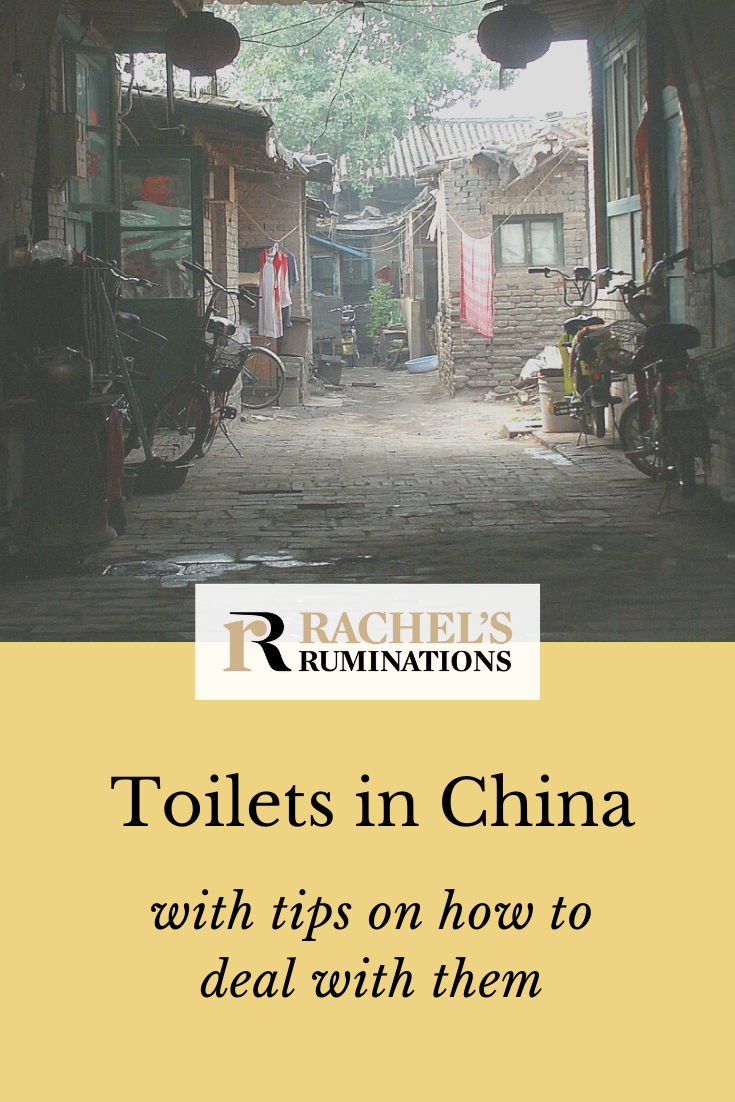 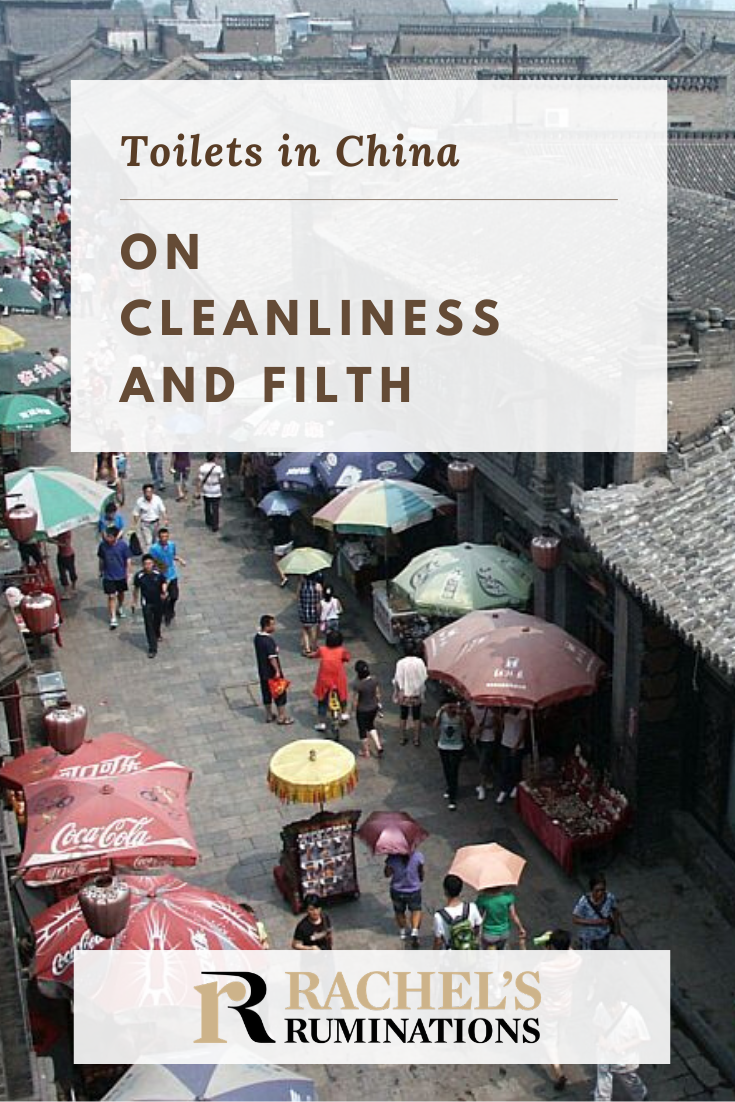 Note added in December 2019: I wrote the following article years ago in Hancheng, China, and I see now how terribly judgemental I was about toilets in China. I’ve added some tips and comments to update it a bit.

My message now is: be aware of how you communicate and behave around the issue of Chinese toilets. We are judging them from the point of view of our own cultures.

I have deleted comments and turned off commenting because of the number of generally racist, anti-Chinese and anti-Asian comments people were leaving. If you want to send me a comment, use the comment form on the “About Rachel” page – see the menu above – but it will not be published.

While it’s okay to feel negative about toilets and other customs in China, be careful that this does not become a condemnation of China as a whole, its people or its culture. It’s a fascinating and wonderful place and I’d go back in a flash if I could!

I’m puzzled by Chinese attitudes toward cleanliness. The cities we’ve seen so far: Beijing, Chengde, Datong, Pingyao and where we are now, Hancheng, are dirty, loud, crowded places. People spit loudly and copiously on the street. There’s litter. Everyone smokes, everywhere. Look at the short film I’ve added here and you’ll see what I mean: it’s the view from our 11th floor hotel room here in Hancheng. If you’re wondering if it’s overcast or if that’s pollution, I don’t know; I can’t tell.

The worst part for us is the Chinese toilets: they are smelly and filthy and disgusting. On the one hand, they’re squat toilets, which is good as far as I’m concerned, because that allows me to avoid touching them, but I don’t understand why people accept that level of filth, especially the smell.

There’s only rarely any toilet paper, and, apparently because the plumbing can’t take it, the toilet paper (that people bring themselves) doesn’t get flushed but gets put in a wastepaper basket next to the toilet—hence the smell. There’s more detail I could give, but I think you get the idea.

Note added in December 2019: I’ve learned since my trip in China that in many cultures people prefer to clean themselves with water and then only use toilet paper, if at all, to dry themselves. Since the plumbing and/or sewer systems can’t handle all that paper, they put it in a trash container instead, and it’s not smelly because it’s only been used to dry clean skin. This is NOT what I witnessed in China. In most places there was no water in the stall to clean myself with, and frankly, the whole facility smelled terrible.

Here are some tips for using a squat toilet in China or elsewhere, in case this is something you’re not used to:

Clearly, too, the vast majority of people here live in relative squalor: mostly run-down huge apartment blocks. There are many public toilets along the streets, and they stink (I haven’t been in them, but they stink just walking by.). I suspect that many people don’t have toilets of their own, perhaps because apartments and more traditional houses have been subdivided so much, so these public toilets get a lot of use.

If you’re thinking of a trip to China, use this Booking.com link to book hotels.

In the smaller towns too, even without massive apartment buildings, people seem to live in very poor conditions. Yesterday, in Pingyao (which is a popular tourist destination because the original walled city of traditional courtyard houses is completely intact), we were walking a side street, away from the main tourist area, and saw a ‘night soil‘ man. They used to have these in European and American cities as well, until sewer systems and indoor plumbing were improved.

This night-soil man had a donkey-pulled cart with a big tank mounted on it, and he was pouring a bucket of ‘night soil’ into the tank. That means there are people living in these traditional courtyard houses who still don’t have plumbing for toilets.

Here are some more tips for using toilets in China:

At the same time, some places can be exceedingly clean too. The hotels we’ve stayed in are spotless, and labour must be cheap because there are people busy dusting furniture, cleaning floors and so on all day.

The toilets in our hotel rooms (mostly officially three-star, but often four-star quality) are Western-style sit toilets and very clean: usually better than in Europe.

Shops and restaurants are often bare-bones, but always clean. The train compartments and the bedding on the sleepers are absolutely threadbare, but clean, and the windows of the train are cleaner than the average in Holland. (Yet the train toilets are just as bad as the public ones, even on bullet trains.)

Several times I’ve seen people pull out tissues and carefully clean around the sides of their shoes. In the waiting room at the train station, where I saw people spit and litter even inside, I watched a woman very carefully peruse the available seats critically before deciding which to sit in. People dust off their scooters before sitting down.

People here are always neatly dressed, even if they are poor. Their clothes are clean and their hair is clean. How they manage that, I don’t know. Especially when you consider those courtyard houses that probably don’t have running water, it’s an achievement!

So where is the boundary? When is cleanliness important and when is filth acceptable?