When I started teaching a class in intercultural communication this past year at the teacher training college, I didn’t actually know anything about it. Or rather, I didn’t know any of the theory, but I’d had a whole lot of practice. I had plenty of anecdotes to share, for example, about differences in expectations and assumptions between Americans and the Dutch.

So anyway, now I’ve learned some of the theory. According to Geert Hofstede, cultures can be quantified in terms of what he calls ‘cultural dimensions’, which allows us to see clearly the reasons for specific differences. For example, China ranks very low on the Individualism (IDV) index, whereas Holland, not surprisingly, rates as one of the highest in the world on the IDV index. There are five indexes, and looking at countries’ rankings helps to explain cultural differences very clearly. People doing business, in particular, need to be aware of these rankings and of specific cultural practices in order to make business deals across borders. Teachers need to be sensitive to these differences when they interact with immigrant students and their parents.

However, we’re not business people or teachers (in this context); we’re tourists. We have very little contact with Chinese people, beyond ordering in a restaurant or checking into a hotel. We certainly are observing cultural differences—especially in restaurants, where the clients’ behavior is very different from what we’re used to—but not interacting much at all.

Another authority, David Pinto, described three steps in interacting with another culture:

We had to literally shove our way out of this waiting room in a train station in Datong.

So much for the theory. I know, as I travel in China as a complete outsider, that despite the fact that I don’t like people smoking in restaurants and spitting in the street, they are going to do it. I have to understand and accept. They are going to eat dog meat. They are going to litter. I can set boundaries where I refuse to do these things myself, but I’m not going to change it. I’ve traveled a lot, and have learned to simply enjoy the differences I see: I observe, and I find them interesting, sometimes amusing, and that’s it. No problem.

Well, here in China I have one problem that none of this theory helps me with: beds. The beds in China are extremely hard. As far as I can figure out, a bed here is nothing but a wooden platform with a thin layer of perhaps the thickness of a wool blanket on it, topped with a sheet. And I’m having so much trouble sleeping! I wake up repeatedly with an aching back, and if I turn onto my side, my hip immediately starts hurting. 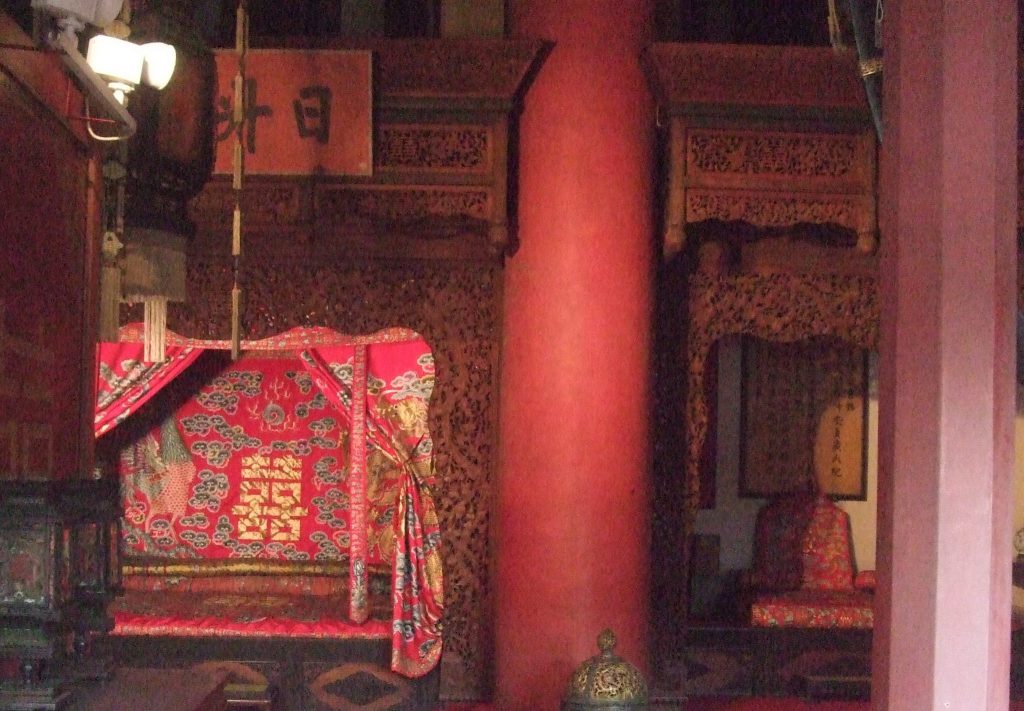 In the Forbidden City, Beijing. Do you suppose the emperor had a hard bed too?

So how do I deal with this?

Pinto’s Step 1: I know that I’m used to a softer bed at home: not very soft by Western standards, but a helluva lot softer than here.

Step 2: I know that the Chinese are accustomed to harder beds. That’s why all of the hotels have hard beds.

Step 3: Set your boundaries and explain them appropriately…hmmm. What do I do? Talk to the bed and ask it to get softer? Go to the hotel reception and complain? What are they going to do—go buy a Western bed just for me? I don’t think so. My boundary is that I can’t sleep without a softer bed, but there’s absolutely nothing I can do about it, but sit here in bed and type until breakfast time…