In my last entry, I mentioned how it seemed to me that the Chinese have wholeheartedly embraced conspicuous consumption. Visiting the Forbidden City the other day emphasized that for me. You could say that the emperors of pre-revolutionary China were the originators of the concept for this part of the world. They represent the ultimate in conspicuous consumption.

The Forbidden City is enormous – truly a city in its own right – and it was entirely devoted to the maintenance and satisfaction of one man, and anyone else he cared to maintain and satisfy. So that meant he and his nearest and dearest could have whatever they desired – and that went even further, it seems to me, than today’s wealthiest jetsetters.

the middle section of the Forbidden City

The emperors had certain areas of ground that only they were allowed to walk on. They could have as many concubines as they wanted, and those women didn’t get any choice in the matter if they were chosen. Emperors were carried, not by cars but by humans, from place to place. People would even castrate their sons in the hopes of getting them a job as a eunuch in the imperial household! Emperors were indulged in every possible way. A billionaire today could probably arrange everything that an emperor had, but would certainly risk the world’s ridicule if he went that far.

Maybe that’s the difference. For the emperors, there was nothing that was too outrageous or extravagant. Today we’re in Chengde, a large, modern and ugly city, but we’re here to visit the emperor’s summer residence. Every summer the entire imperial household moved here to escape the heat of Beijing. When I say ‘the imperial household’, I mean 10,000 or so people, who all spent seven days traveling here en masse, just to serve the emperor’s desire to be here instead of there. Now THAT’S conspicuous consumption.

So then there’s a nationalist and then a communist revolution, and the Forbidden City is taken over by ‘the people.’ And it really is taken over by the people. What we saw was thousands of people, mostly Chinese tourists, trampling all over it, pushing and shoving to peer into buildings where the emperor sat or worshipped or slept. And, of course, if the emperor was the only one allowed to walk through a particular archway, then that is where everyone wants to walk.

I can imagine that when the Forbidden City was first opened to the public, people visiting it had an attitude of scorn, or even hatred, of the whole imperial household. How could they live this decadent, wasteful lifestyle, blind to what was happening in the real world outside the wall? The tourists trudging through the Forbidden City were there to emphasize how the mighty must fall, and good riddance to them! 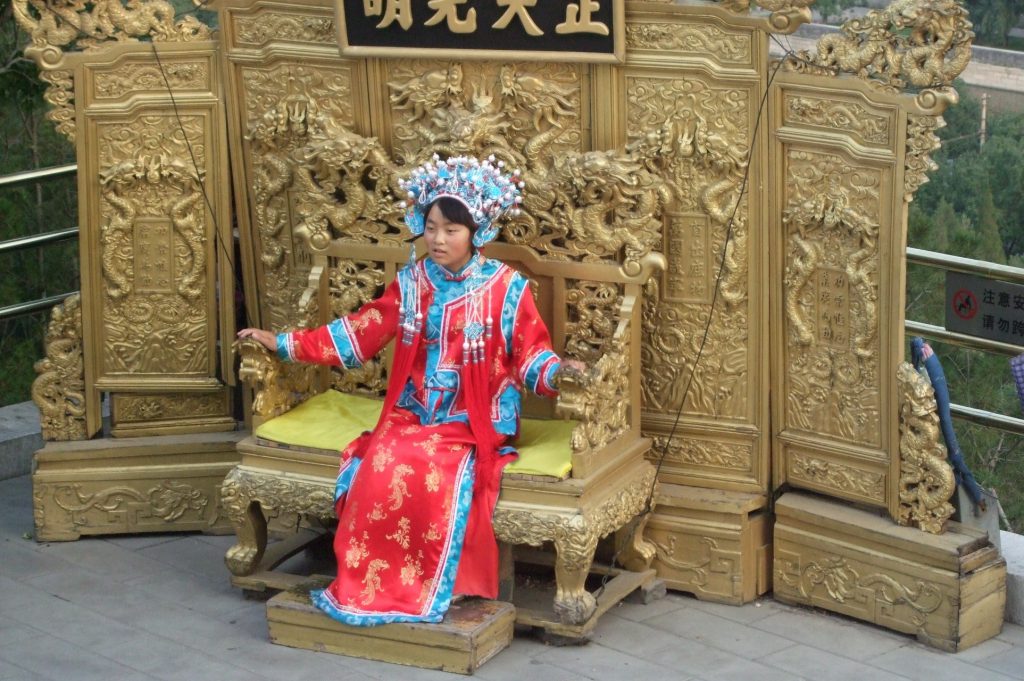 a girl dressed up as empress

Nowadays, though, I’m guessing there’s a different purpose to visiting. I think people are curious but also to some extent admire the old way of life. There’s a certain nostalgia about the empire, even though I’m sure no one would say they wanted those days back. Despite the excesses, there was beauty there, if only in the architecture and landscaping, for those who were part of the royal household. It was interesting to see that there were several spots around the Forbidden City where people could dress up as emperors or empresses and have their photos taken. To me, that implies admiration, not scorn.

roof detail in the Forbidden City

And outside of their visits to royal sites, there are clearly renewed aspirations here. Business is booming, and everyone is trying to make money. As I wrote before, consumer goods at all levels are available and desirable here. People may not aspire to become an emperor, but they do admire that level of luxury. And they’re doing their damnedest to attain it.