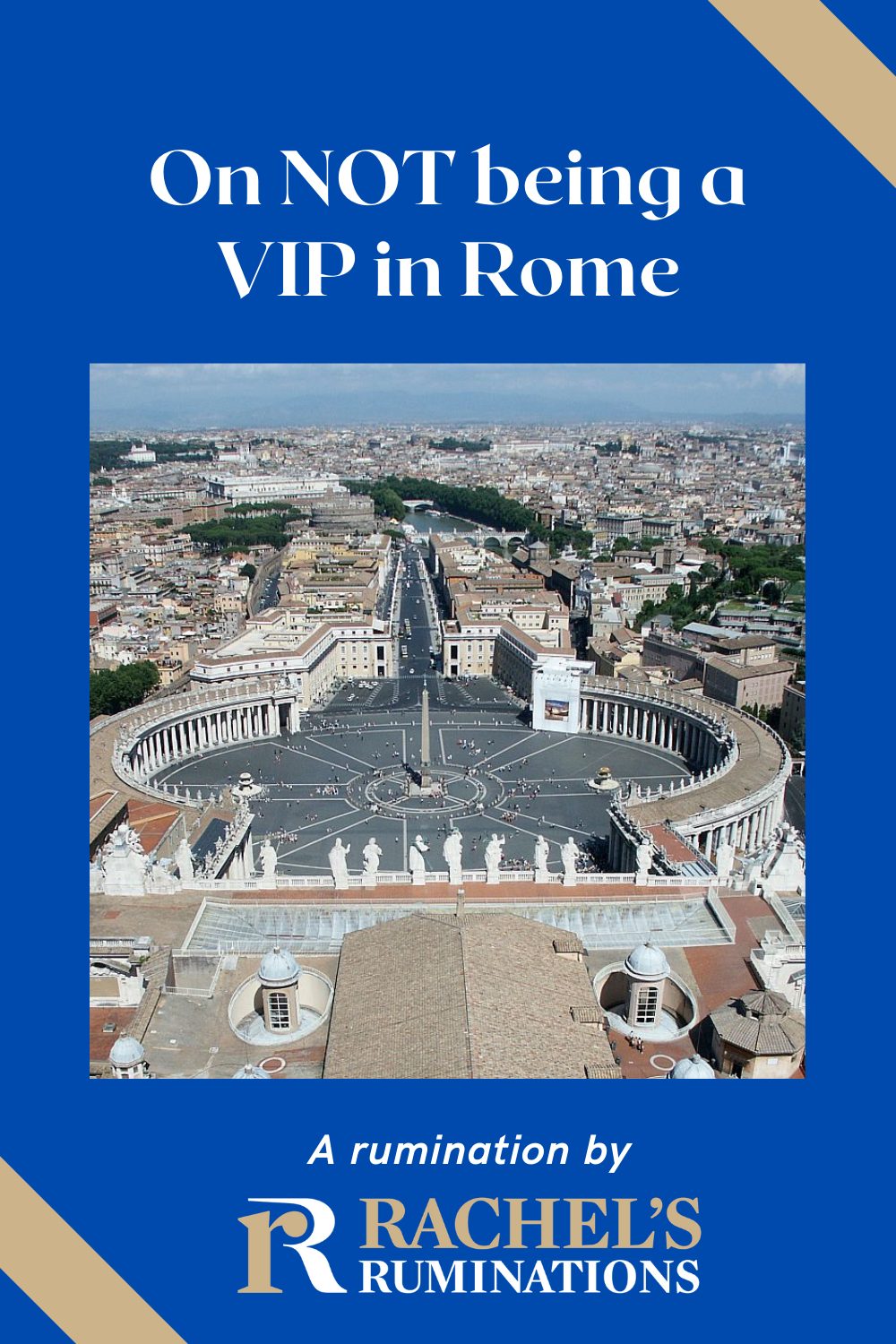 We were in Rome yesterday and the day before, but apparently so were representatives of the G8 nations and other VIPs. Sights/sites closed or opened arbitrarily to accommodate their whistle-stop visits.

A note from 2020: I wrote this post back in 2009, one of my earliest ones. I usually try to keep my articles useful these days: containing information that people can use to make their own travel choices. This one, though, is just an example of my ruminating about something I experienced while traveling. Reading it again, more than ten years later, I am amused enough to leave it here, with only a few tweaks and few added photos. I hope you enjoy it too.

And a disclosure: This article contains affiliate links. If you click on one and make a purchase, I will receive a small commission. This will not affect your price.

At one point, for example, we wanted to cross the road in the middle of St. Peter’s Square in the Vatican. Just cross the road, mind you, like the chicken, to get to the other side.

Suddenly, that was no longer possible. Policemen and police cars had materialized and deployed themselves on either side of the road and, from one second to the next, no one was allowed to cross. No explanation was offered, so we, and perhaps a hundred other tourists, milled around, wondering what was going on.

It turned out that what was going on was the simple exit of one Japanese dignitary – the Japanese flag tied to his black, shaded-window car was the giveaway – from the Vatican. Presumably this one VIP in Rome had an audience with the Pope.

In less than a minute, the whole operation was over: we tourists were allowed to resume our wanderings, the policemen faded away in their small Italian-made police cars, and St. Peter’s Square returned to its normal chaos.

I often use Booking.com to book my accommodations. Click on the banner below to book yours!

Yesterday we set out in the morning to see the Roman Forum. We arrived at the gate at 11:07. It was closed. People had clearly recently been allowed in; we could see a line of tourists going through the entrance turnstiles with their tickets.

Again: no explanation was offered, other than a sign posted on the door that the Forum would be closed from 11 until 5.

My theory is that the Forum was simply closed just in case the G8 chose to show up.

The thing that bothered me, again, was the lack of explanation. If the sign had said something like “The Forum will be closed today just in case any of the important G8 dignitaries want to see it,” I wouldn’t have minded as much. If the policemen who stopped us from crossing the road had said “Wait just a moment until the Japanese foreign minister drives by,” then, okay, I’d accept that.

If you’re planning a trip to Rome, use this GetYourGuide link for booking tours, buying skip-the-line tickets, or arranging transfers!

It happened once more yesterday, after we went back to the Forum after 5. We were walking back toward the metro, which means we were also walking toward the Colosseum.

A large black van – not the police this time, but the Carabinieri, whatever that is – was parked on the sidewalk, not lengthwise but crosswise, blocking the sidewalk entirely. The uniformed carabinieri (weapons, helmets, full riot gear strapped to their sides) said nothing, but gestured us across the street.

But if you’ve ever been in Rome, you’d know that in Rome you don’t cross the street where there isn’t a light, or at least a zebra crossing!

Yet that’s just what they were telling us, and everyone else who came along, to do: walk out into Rome traffic and cross the road. And they weren’t stopping traffic to help us do so either. If one of us had been hit by a car, could we have sued? Who would we sue? The carabinieri? The G8?

Anyway, again there was no explanation, but presumably someone far more important than us was going to visit the Coliseum and this unnamed VIP in Rome was worth risking our lives for.

Some day, I would love to hear about VIPs turning down these whirlwind sightseeing visits in order to spare hundreds, perhaps thousands, of tourists the inconvenience (and possibly danger) they cause.

I won’t hold my breath.

Have you ever had to change your plans because of a VIP? Tell me about it in the comments below!