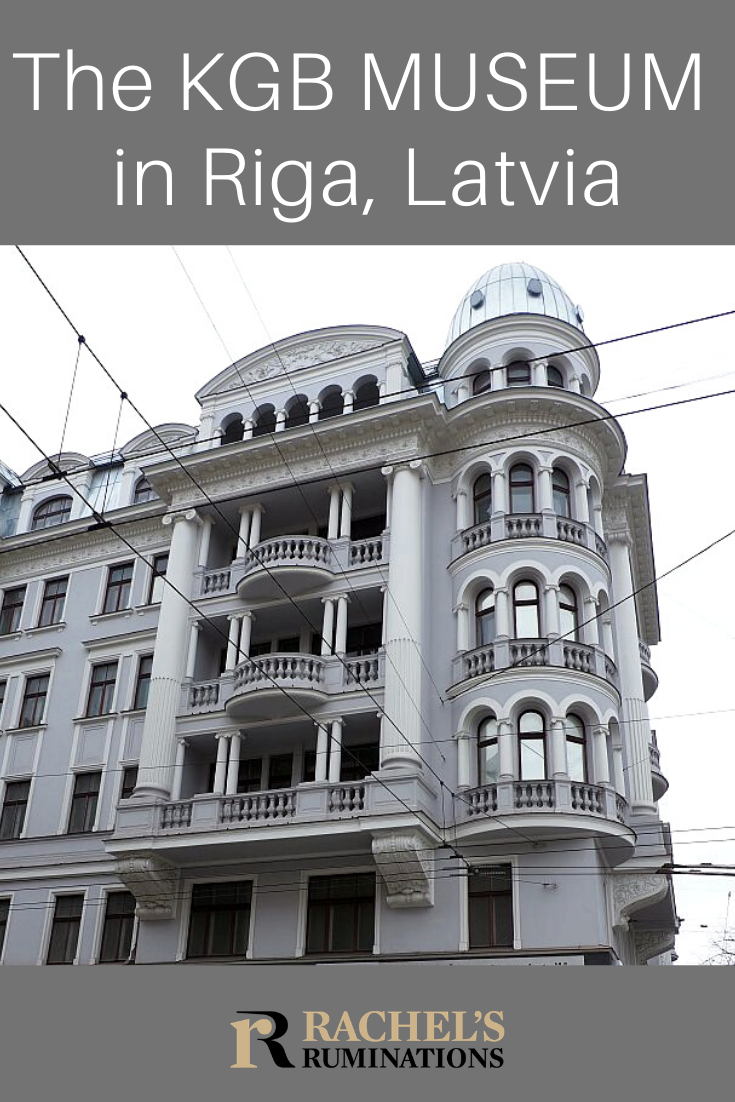 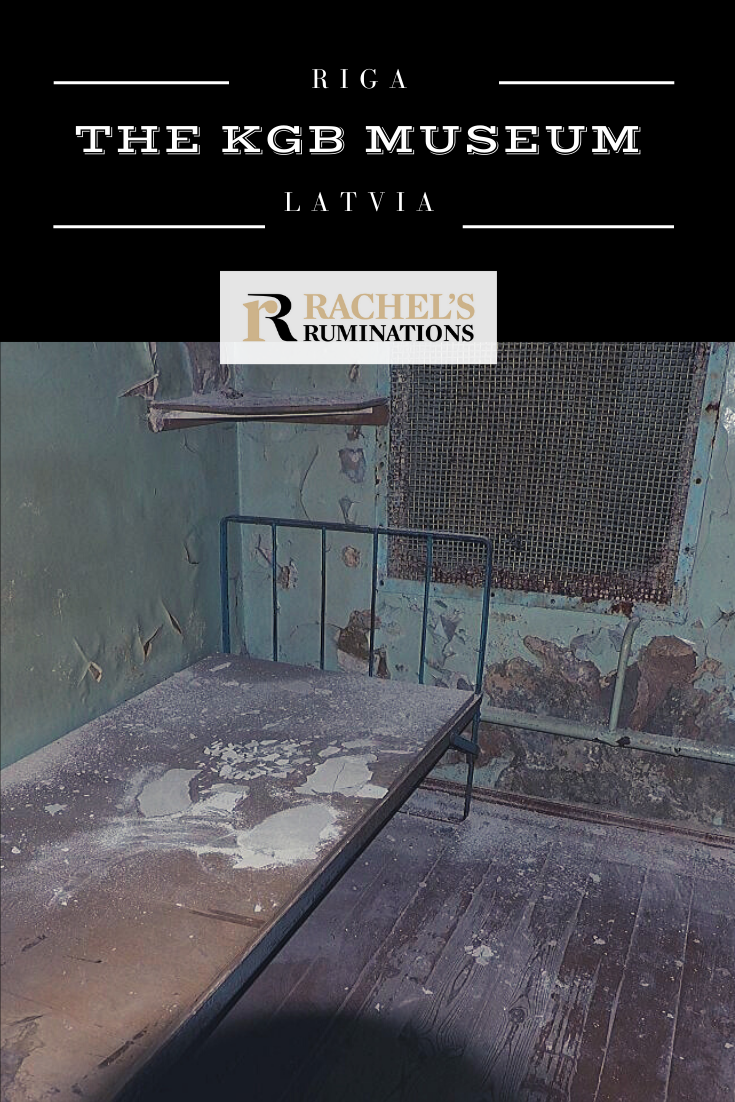 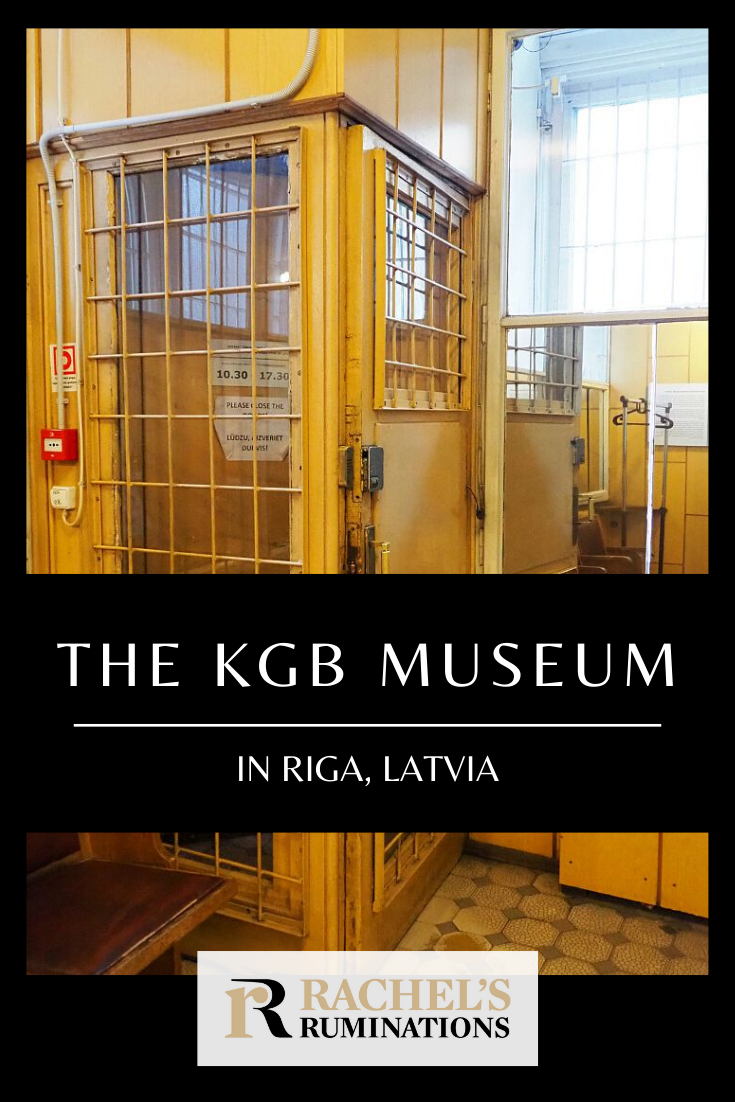 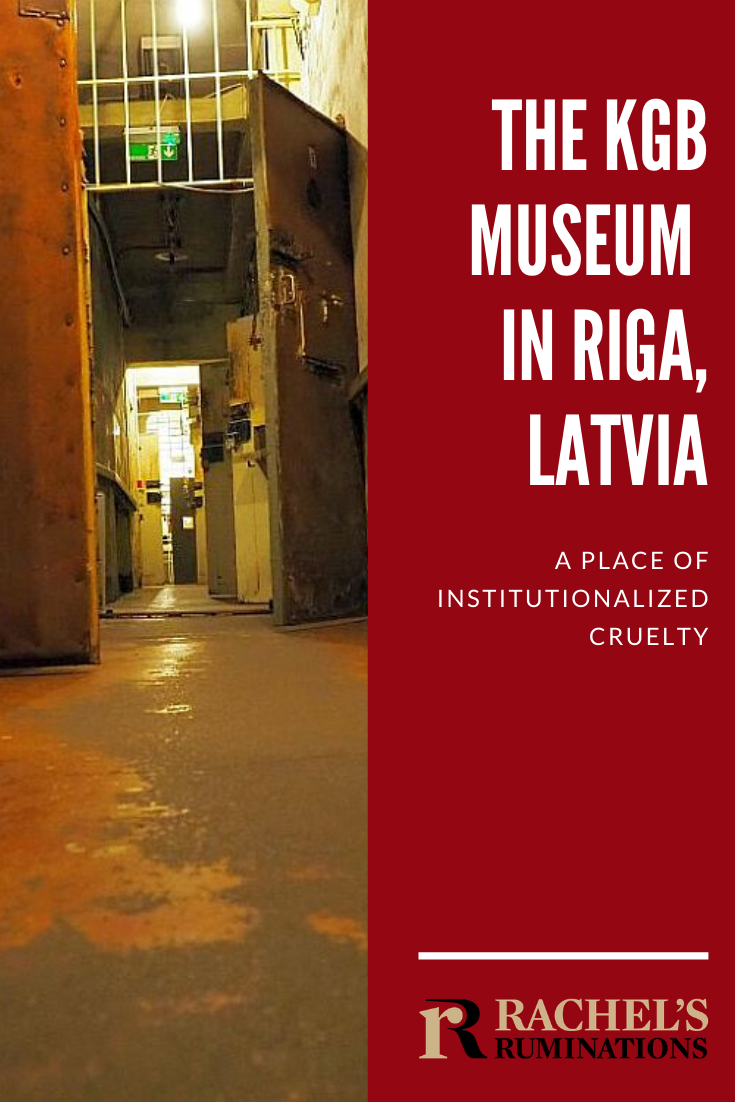 You could easily miss the KGB Museum in Riga if you didn’t know where to look. Commonly referred to as “the Corner House,” it looks on the outside like a quite stylish residential building. I walked right by it and had to retrace my steps a block or two away.

Basically what the KGB did in this building was imprison people for months, interrogating and torturing them, then either executing them on the spot or sending them to labor camps in Siberia.

The entrance to the KGB Museum in Riga

This building became known as “the Corner House” because of the entrance on the corner, which was the only entrance the general public was supposed to use. Walking in, I felt jarred by the contrast with the pleasant exterior: the door is, essentially, a cage, presumably to be able to bar people from outside coming in, but perhaps also to stop people leaving once they’d entered.

Otherwise, though, the first room looks much like any down-at-the-heels government office. A few dilapidated chairs on the right, a counter for the reception on the left.

This room also holds a mailbox, which people would drop notes into during the Soviet period to ask about their imprisoned or missing relatives, to make requests and – much more sinister – to report people who were “disloyal” to the Soviets.

This article, A Riga City Tour: 10+ things to see in Riga, might be useful if you’re planning a trip there. And also this one: Two Latvian food tours.

The exhibition “History of the KGB Operations in Latvia” on the ground floor tells about the building’s history and the Cheka/KGB’s activities in this building between 1940 and 1991, with an emphasis on the work of the resistance movement. Most of it is in the form of large panels with text and photographs.

While I learned a lot of background from this, it was fairly dry, and didn’t give me a clear idea of just how much cruelty was a part of this building. I got an inkling from the films that ran continuously in a neighboring room. In these, ex-prisoners told about their own experiences here.

It was the tour that helped me better visualize what happened here. I’ll describe that below, but first, here’s the general history of the building, and of Latvia along with it:

History of the “Corner House”

Built in 1912, the “Corner House” held shops on the ground floor and apartments above, like most buildings in the neighborhood.

That didn’t last, though, because of the Latvian War of Independence in 1918-1920, which was, to oversimplify a bit, a struggle between the newly-declared independent Republic of Latvia and the newly-formed Soviet Union, with involvement by the other Baltic states as well as Germany. The Latvian Revolutionary War Committee used the building briefly in 1919.

The building changed hands a number of times after that, reflecting the turbulent 20th century history of Latvia:

1920: The new government of independent Latvia took over the building for government use, including the Ministry of the Interior and other offices.

1940-41: In 1940, the Soviet Union forcibly annexed Latvia. The Cheka (secret police, forerunner of the KGB) took over the building. This only lasted a year because, in 1941, the Nazi army invaded and took over Latvia, treating it as a conquered part of the Soviet Union.

1941-44: For most of World War II a youth group called “National Watch” occupied the building as well as Latvia’s puppet government, appointed by the Nazis. The Nazis deported and/or executed thousands of people: Jews, Roma and resistance fighters. This lasted until 1944, when the Soviet Red Army took over once again.

1944-91: This is the period that the KGB Museum mostly addresses.

The Cheka got the building back in 1944, using it as their headquarters. The Soviets busied themselves with mass deportations of Latvians to Siberia, particularly members of the pre-war independent Latvian government and anyone arguing for a return to independence. Many were first imprisoned here.

The name of the secret police changed several times, becoming the KGB later in this period.

The Corner House after independence

1991: Latvia regained its independence from the Soviet Union.

1992-2007: The Latvian State Police used the building in this period, presumably including the prison cells and interrogation rooms, but without the torture or executions.

The building has been empty since then. The exhibition on the ground floor was installed in 2014, but the rest of the building is unoccupied.

Today, the ground floor and basement make up the KGB Museum, part of the Museum of the Occupation of Latvia 1940-1991. The rest of the museum is at a different location.

Here are some other articles about sights from the Cold War era:

While I already “knew” the truly evil things that happened in this building, I didn’t really understand them until I took the tour. And again, just like when I first entered the building, the contrasts struck me most, at first: a lovely entrance hall was our first stop, reminding us that this was an elegant building once upon a time..

But then, down the hall, we saw the elevator. It is divided in half so that a prison guard could lock a prisoner into the back of the lift while he stood on the side next to the elevator door. And the hallway beyond the elevator was … well, the best word for it is “grim.”

Maybe it was my imagination, but even at the beginning of the tour I felt like the place was full of ghosts.

This hallway on the ground floor is where some prisoners were held in their cells, along with more cells in the basement. Our tour guide pointed out the horizontal bars along the walls of the corridor, installed so that any prison guard who felt threatened could just push on the bar to set off an alarm. Each door has a small hinged cut-out, so prison guards could look in without opening the heavy door.

The cells themselves were always overcrowded and kept boiling hot all year. The lights stayed on night and day and the small windows, if there were any at all, were covered so prisoners could not see out. The beds were metal without mattresses and the toilet was nothing but a bucket in the corner.

We were allowed to look into and enter several cells in the basement, and just a moment in a cell was enough for me. The grimness of the place . . . and then, as the guide spoke about life in the cells, I could imagine the smell of sweat and fear and damp and that bucket in the corner, and I could picture how easy it would be to lose the will to live, spending months in such conditions.

After viewing the cells, we arrived at a kitchen in the basement. Apparently the kitchen staff were prisoners brought in from another jail. They got the ingredients through the window wells: like dropping it down a hole. The food was then cooked without washing, and generally consisted of bread and thin soup, often made from rotten ingredients.

For “exercise,” the inmates could go outside in a very small yard for about a half-hour a day with the other prisoners from their own cell. The yard is a narrow space between buildings, roofed over with bars and fencing, making it, in essence, a cage with a bit of natural sunlight reaching through the bars, if they were lucky. A walkway above allowed an armed guard to keep an eye on the prisoners to make sure they didn’t speak.

We also saw an interrogation room, although most of the interrogation rooms are on upper floors, where this tour doesn’t go. It looked, I suppose, like any interrogation room would look: stark and bare, with a table in the center and a chair on either side of it. There is no chair for a lawyer, though; these prisoners had no rights. Beatings and torture over weeks and months were a standard part of their interrogation.

Passing through the courtyard of the building, we entered the garage, where the executions happened. Hundreds of people, over the course of the KGB headquarters’ existence, stood in front of this wall and waited for the bullets. The blood is gone, and the wall was covered over after independence, then stripped back for the museum, but yellow spots mark the remaining bullet holes.

The tour group I joined to see the museum got quieter and quieter as we moved from room to room on this tour, and the idea that we were standing where so many had been killed in cold blood silenced us entirely.

Going to the KGB Museum in Riga, I expected something like the Stasi Museum in Berlin: a place where evil is couched in bureaucracy and technology and ordinariness. This was far more visceral: visiting a place where such violence and stifling of the spirit occurred.

The KGB Museum tells a fascinating yet terrible story that’s worth remembering. If you visit, don’t settle for just the exhibition; the tour is where you’ll get a real sense of the place.

If you’d rather not arrange things yourself, this walking tour, Riga, the Darkest 50 Years, covers several sights from the Soviet period, including the KGB Museum. It does not include the tour, though. You could add it yourself at the reception.

The exhibition is relatively accessible, though wheelchairs would have to be rather narrow. The tour, however, is mostly in the basement, down a set of stairs.