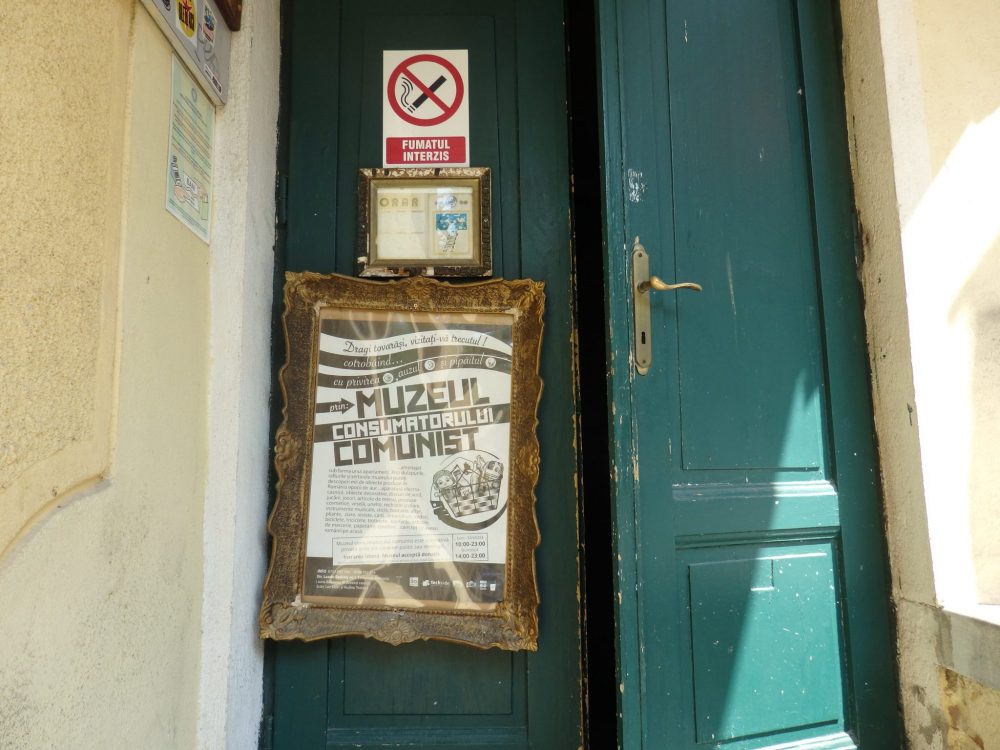 the entrance to the Communist Consumers Museum

When we passed through Timişoara, Romania, this summer, we didn’t really have any plans. Picking up a map at the tourist information office, we wandered around, admiring the faded glory of so many of the buildings.

By mid-afternoon, we’d seen most of the churches and plazas that the map highlighted, and decided to visit only one of the city’s museums: the Communist Consumers Museum. We chose it purely based on its name, and the curiosity it aroused.

Housed in the basement of a pub called Scârţ Loc Lejer, the museum is easy to miss. Climbing a small flight of stairs, we entered the pub: dark but pleasant-looking. Pictures and posters of varying quality covered every inch of the walls, and brightly-colored open umbrellas hung from the ceiling.

The museum is free, and you access it from the first room of the pub, down a staircase into the basement. Our eyes adjusting to the dim lighting, we realized that the hallway we entered was lined with … stuff. Bicycles and pictures and every possible item just standing or hanging or piled around us. 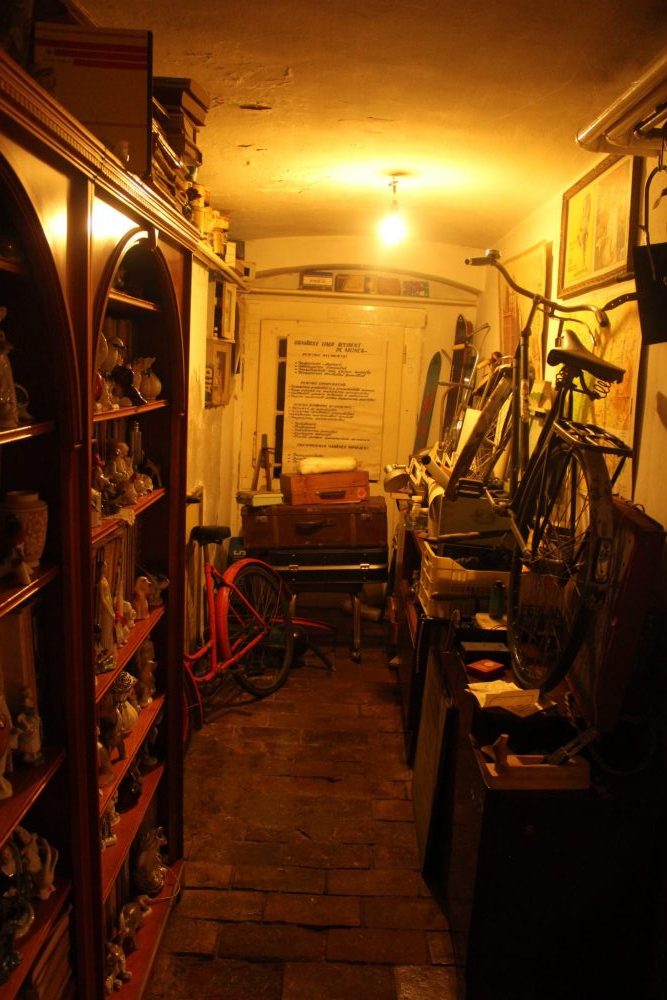 The Communist Consumers Museum isn’t so much a museum as a collection. Nothing is arranged or specially lit, or even labeled, as I’ve come to expect from museums. The set-up resembles, rather vaguely, a communist-era apartment in that there is a living room, a bedroom and a kitchen, along with that hallway piled with … artifacts? Junk? Treasures? I suppose it depends on your point of view.

At the bend of the hallway stands a bookcase. In front of the books is a collection of ceramic and plastic figurines: “chotchkes,” my mother would have called them. 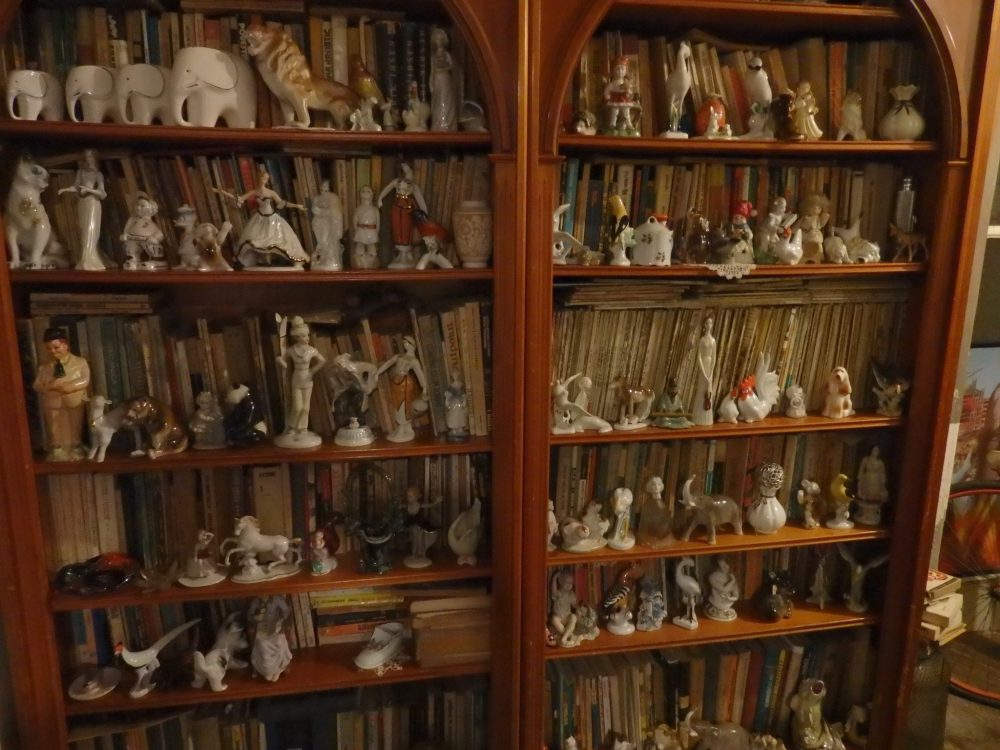 a bookcase full of chotchkes at the Communist Consumers Museum in Timişoara, Romania

The bedroom, living room and kitchen overflow with things as well: far more than any apartment would have held in the communist era, I’m sure.

In the living room, I counted five television sets, though there may be more, piled precariously with vintage radios, record players and other unidentifiable appliances. 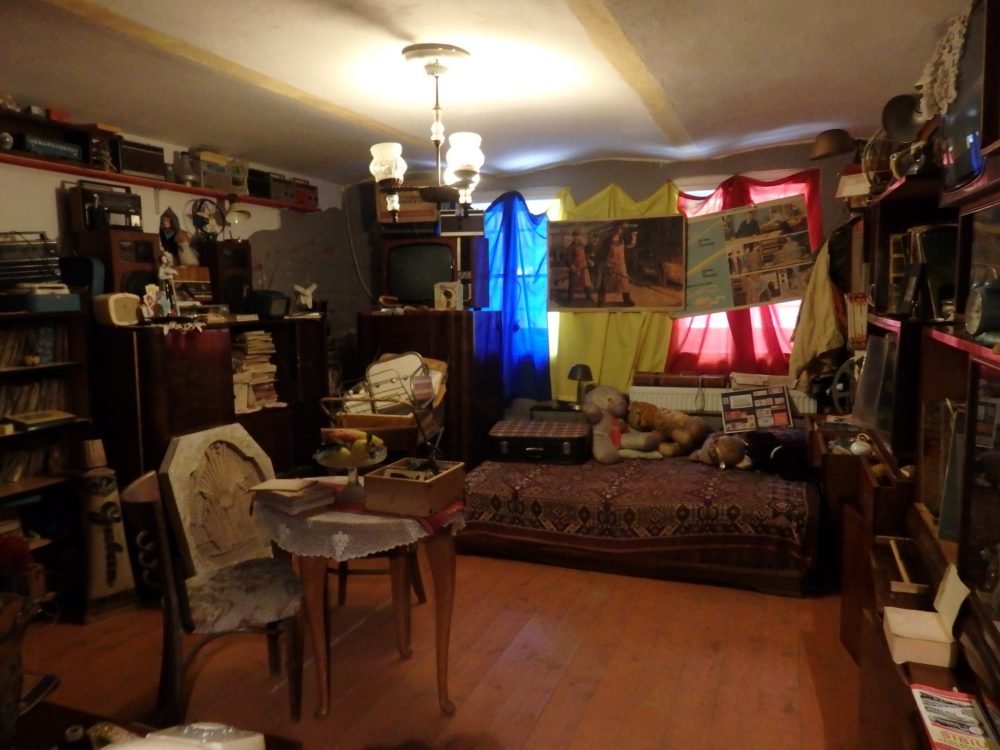 The “living room” at the Communist Consumers Museum

The bedroom is mostly dedicated to children’s items: toys mostly, bicycles, games, and so on. Piled to the ceiling on all sides, it’s a room I’d never let a child loose in!

In the kitchen, empty liquor bottles line shelves. So do dishes and containers: ceramic, metal and plastic. The kitchen table supports not one meat grinder, but a row of five, all different, on each end. An open cupboard reveals complete sets of ceramic – or possibly plastic – containers for flour, sugar and so on. 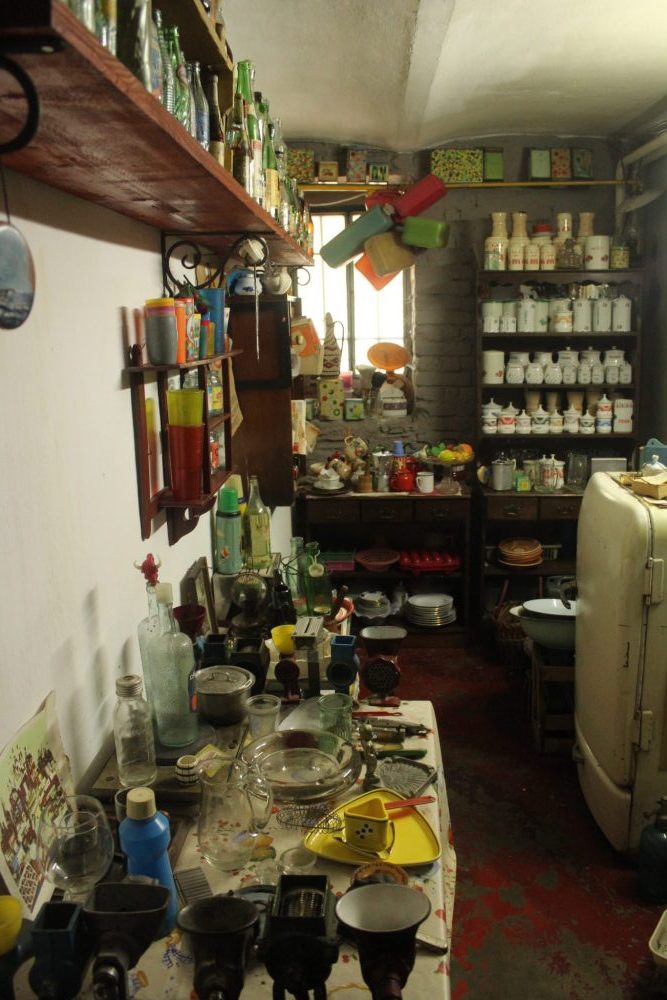 I think how a person experiences the Communist Consumers Museum would depend on his or her point of view. I can imagine that anyone who grew up in communist-era Romania would enjoy this museum tremendously. I’m sure there would be a lot of pleasurable flashes of recognition: “Oh, I had one of those!”

To me, it was less personal than that. When I visited the DDR Museum in Berlin, I saw a case showing souvenirs that East Germans brought back from travel to other Eastern European countries. It never occurred to me, to be honest, that people would have bothered with collecting, for example, ceramic figurines. But of course they would. People want a bit of beauty around them … though beauty is a matter of taste!

Many of the items did strike me as vaguely familiar: some of the toys particularly. They weren’t the toys I had as a child in the sixties, yet they were similar in style. What we call “vintage” now was fashionable then, and clearly the styles transcended the Iron Curtain.

I found myself wondering how this museum came to be. Did some hoarder collect all this stuff and just start calling it a museum? Did people start donating their unwanted, no-longer-fashionable items once the Cold War ended? According to Atlas Obscura, the Communist Consumers Museum is still accepting donations. Where could they possibly fit more stuff? 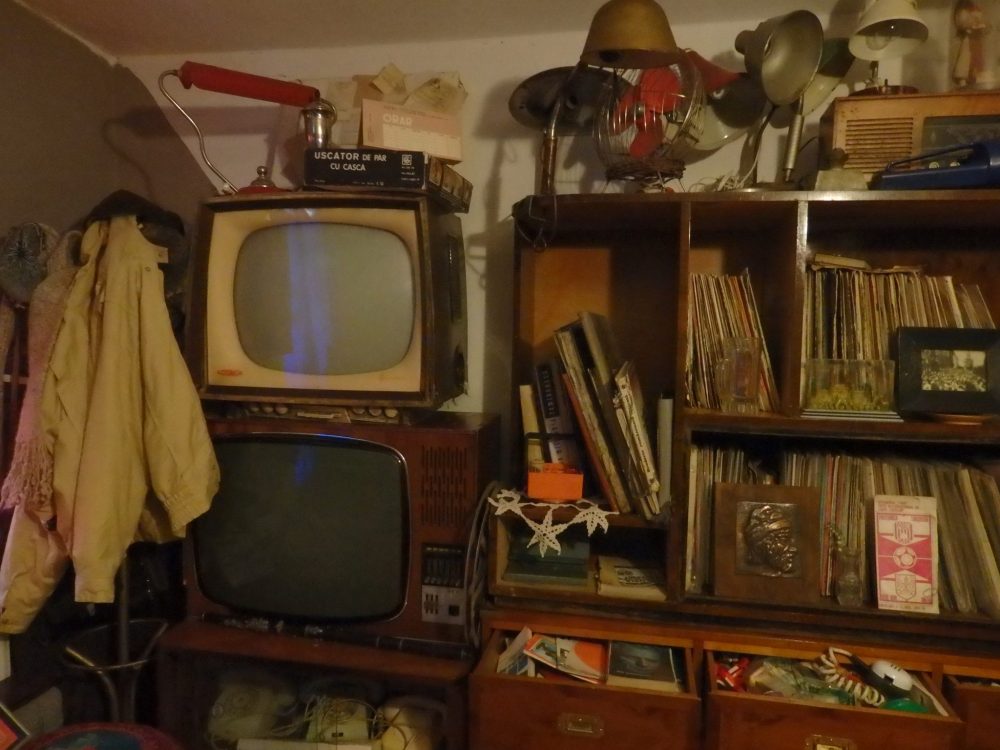 a section of the living room at the Communist Consumers Museum

I enjoyed the chaos for the most part, but a real museum would curate the collection. They’d set up the rooms to look like they would have in the time period they are presenting, not like some packrat’s nest. The curators would store the rest of the items somewhere else, and perhaps rotate them into the display areas for variety. Someone would be there to explain the items and answer questions as needed. For example, I would have liked some explanation of consumer goods in Eastern Europe. Did the manufacturers of ceramic figures compete with each other, just like in the West? Did they literally copy Western consumer items, or did they independently develop them, influenced by Western aesthetics?

I would have happily paid an admission fee for a real museum.

The pub, by the way, has a very pleasant garden and serves all the usual pub drinks. After your museum visit, stay for a drink, and make sure to leave a hefty tip to thank them for not charging admission. It’s on Saszlo Szekely Street 1 in Timişoara. 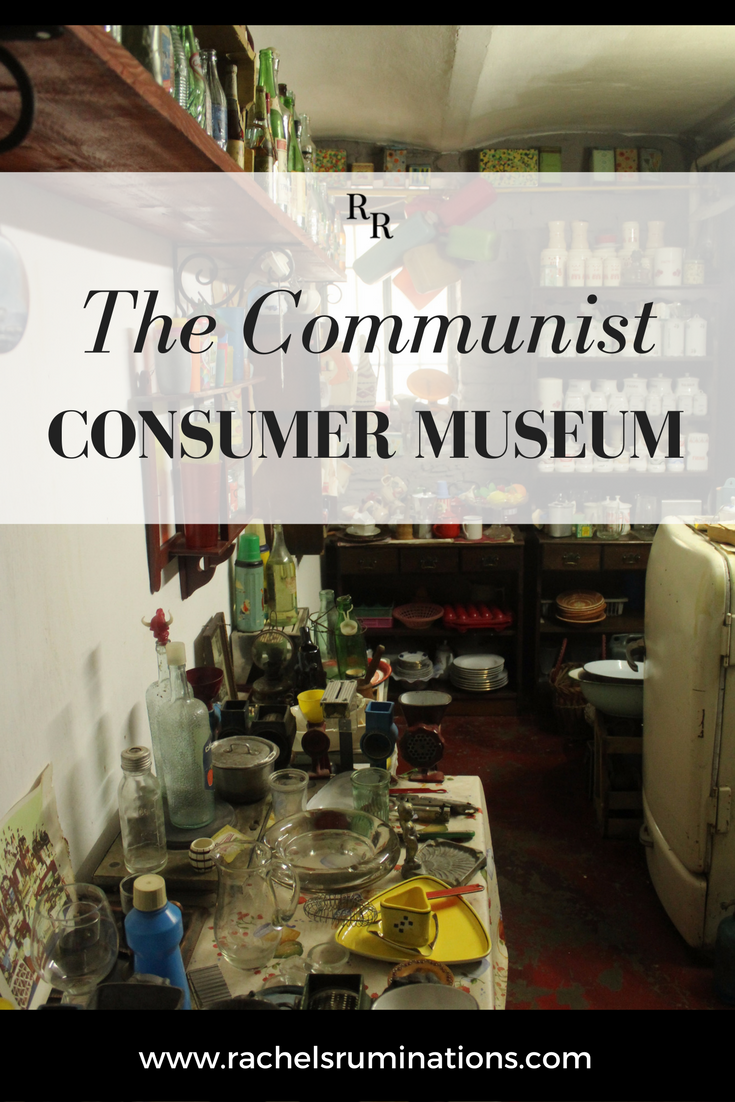