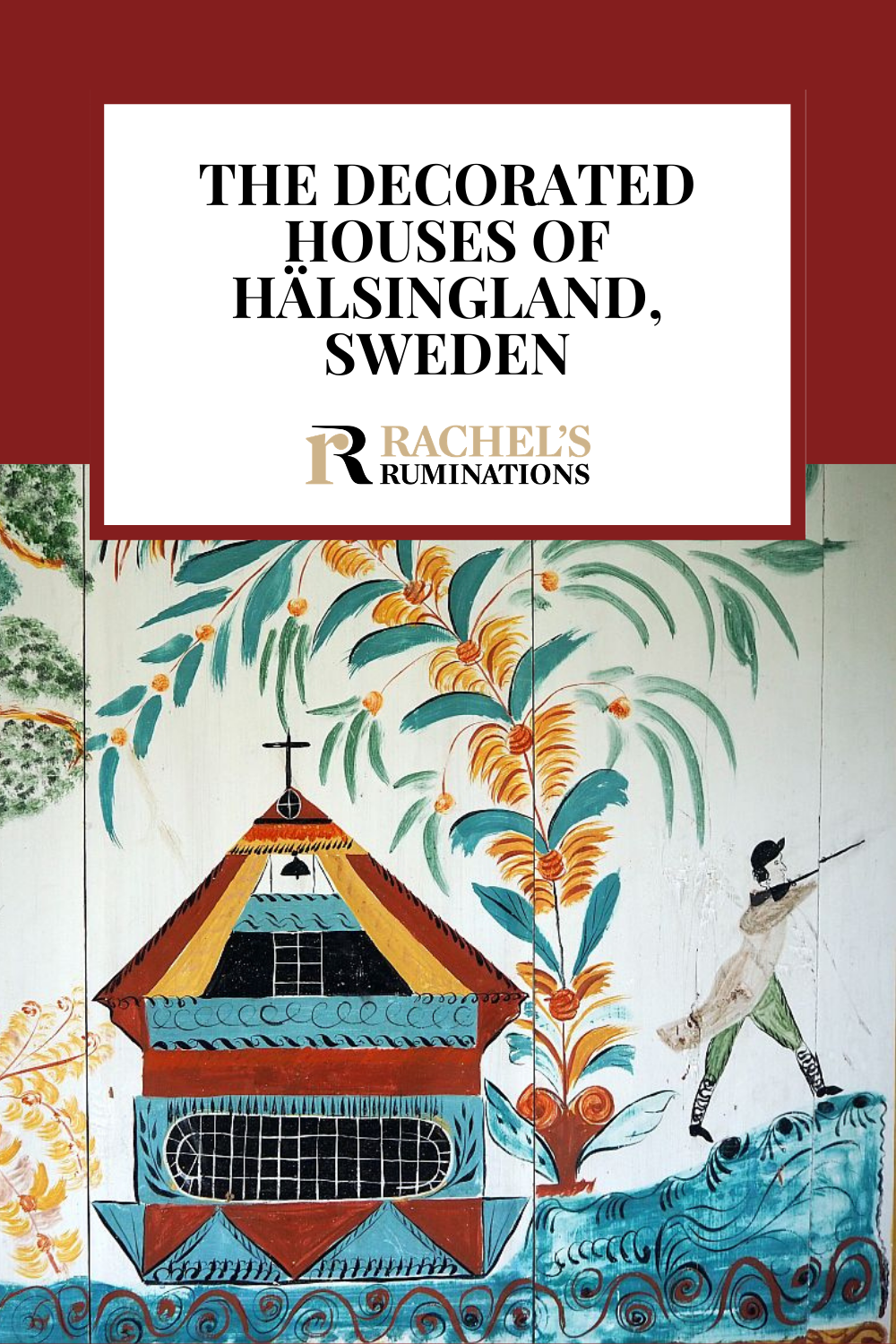 Some UNESCO sites aren’t famous works of architecture like Himeji Castle in Japan or the 16th century canal ring of Amsterdam, for example, or ancient historical monuments like Petra in Jordan or Baalbek in Lebanon. Some are more modest, less showy, and exemplify local culture and crafts. The Decorated Farmhouses of Hälsingland, Sweden, are a great example of this kind of UNESCO site.

Prosperous farmers in this fertile region decorated whole rooms – as many as 15 rooms and sometimes whole separate houses – just for special festivities like weddings. The rooms provided space for the meals and celebrations associated with special occasions, and also accommodations for visiting friends and relatives. The rest of the time, they stood empty.

Imagine having enough extra wealth to build an extra house and pay for decorating it – more on the decorations below – and then not to use it more than a few days a year!

The decorated farmhouses are products of wealth, simply put. These farmers became prosperous through the sale of flax for linen, from raising livestock and from selling timber rights. They were farmers, but aspired to more. These farmhouses were an expression of that aspiration.

Even their residential rooms often contained decorations as well, if somewhat simpler than in the festivities rooms.

The farmhouses included in the UNESCO designation all date from the mid-19th century, though the decorative tradition goes back to the 16th century. All but one are privately-owned, and each has different rules for visiting.

The decorations in the Hälsingland farmhouses

So what do the decorated farmhouses of Hälsingland look like? They’re rather plain wooden structures on the outside, and mostly painted in the traditional Falun red that is so common in Sweden. Inside, though, they are richly decorated.

The paintings represent a fusion of folk art with the styles favoured by the landed gentry of the time, including Baroque and Rococo. Decorated by painters, including known and unknown itinerant artists, the listed properties represent the final flowering of a long cultural tradition.

It’s a very unsophisticated and simple kind of decoration, but it covers the walls from floor to ceiling either with paintings or stencils. The idea was to imitate the higher classes in their manor houses, but the result was a style unique to this region.

In some of the houses the wall painting looks like marble – or that’s the intention, in any case – a direct reference to what the higher social class might have in their stately homes. Painted images show Bible stories, generally, but with the people depicted in mid-19th century styles.

Wallpaper covers some walls, while some wooden walls have been directly painted. Stenciling in multiple colors creates a bright repeating pattern. The moldings at floor and ceiling also sport either stenciling or freehand painting.

We only saw the outside of Bommars, since we had not booked ahead and it was closed when we arrived. Like many of these farmhouses, the farmstead consists of three buildings sited as three sides of a square. Apparently many had additional outbuildings on the fourth side in the past.

Inside is mostly decorated in wallpaper based on French and English wallpaper of the 19th century, but a local artist made it, using stencils.

Built in the 1820s and decorated in the 1850s, Erik-Anders shows a subtler decorative style than most, with more marbling and somewhat simpler patterns. Some of the walls are painted to look like mahogany. The overall effect of the figurative paintings as well as the stenciled patterns is more elegant than the other houses.

Only two rooms on the ground floor saw daily use, and had clay-plastered walls for insulation. This implies, to me, that the families that lived there actually lived quite modestly, only splashing out for celebrations. The garden has been restored to what it looked like in 1920.

An artist named Jonas Wallström did the decorations on the festivities building at Gästgivars – a separate building in this case, dating to 1838.

While he included many hand-painted sections, including trompe l’oeil detail, he is best known for his stenciling technique that he based on the patterns on Wedgewood china. Other artist-decorators copied his technique in other farmhouses in the area. To me it’s colorful and cheerful, which must have been welcome in the winter with such short days.

If you look into the square of buildings, the festivities building is on the right while the central building of this farmstead is the residential building. To the left are the original farm buildings: stable, sheds and a bakehouse. Originally there would have been other work buildings on the fourth side of the square.

Pallars was probably the most extensive and impressive of the Decorated Farmhouses of Hälsingland that we visited. The white central farmhouse was residential and dates to 1858. It’s unusually large and grand-looking, which was, of course, the intention.

Several of the rooms inside the residential building were solely for festivities, and only two of the rooms the family actually lived in have decorations.

Next door, to the right if you are facing the white building, are two houses attached to each other, each with a prettily-carved doorway. One was originally a guest house and the other a stable that was later converted.

The original guest house, built in 1853, accommodated visitors during weddings and other festivities. It has remarkably ornate decorations by Blämärlarn, who was a painter from a nearby province in Sweden. You can see the status-signaling here again in the quantity of blue pigment he used. Apparently the blue pigment was particularly expensive. This is the only one of the farmhouses where the landscapes on the wall depict real places in Sweden.

Upstairs is plainer, without decorations. It offered accommodations for farm workers and tradesmen.

To the left of the white house is a larger building that was once the farm’s main residential building and probably dates to 1819. It has just three rooms and a bakery, as well as an attic.

Here are the three we did not visit:

This was one of the most affluent farms in the area. When the family that owned it built a new residential house in 1910, they left the old one and its contents untouched, which makes it one of the best-preserved decorated houses of Hälsingland. The last owner gave it to the local municipality, so it the only one of the UNESCO farmhouses that is in public hands.

This one is particularly well-preserved, with many painted rooms for festivities. The painter, Anders Ädel, is known for his flower paintings in particular.

If you enjoy folk art and architecture, try one of these articles from other sites in Sweden:

This is the largest of the UNESCO-listed Decorated Farmhouses of Hälsingland, with two identical halves built for two brothers. One half sports landscapes in blue and pink, while the other half has an “Arabic-patterned French wallpaper” in brown and yellow. The brothers built a shared house for parties.

Many more decorated houses in Hälsingland

Ol-Anders is not part of the UNESCO World Heritage designation. I’m not sure why it wasn’t included, because it has the requisite elements: painted residential and festivities rooms that at least look original.

The colors are remarkably cheerful, yet unsophisticated, in its big festivities room. I included two pictures from inside Ol-Anders above at the beginning of this article: both show murals from the festivities room there.

Ol-Anders is now a tourism visitor center and houses an Emigrant Museum focusing on a religious sect from the area that emigrated to Bishop Hill, Illinois. It would be a good place to stop first to get information about the others you want to visit.

We also visited Löka, a local heritage and community center that inhabits another decorated farmhouse. Löka is a good place to learn about the history of the area, even if its decorations aren’t as impressive.

The association that operates Löka keeps a collection of local textiles and traditional costumes. It also maintains a range of farm-related buildings from the same period: a barn, a cowshed, and several decorated houses.

While there are in fact something like 1000 such farmhouses in the Hälsingland region of eastern Sweden, only seven of them make up the UNESCO-designated collection. The explanation given in the region’s tourist brochures is that the requirements are stringent, and that these seven represent all of the tradition that was so common across the region.

The best way to get around this UNESCO site, which is scattered across Hälsingland, is by driving. To rent a car, use the form below:

If you like folk art and driving through pretty countryside, you’ll enjoy visiting this seven-part UNESCO site. We were on our way south from taking a Hurtigruten cruise up the coast of Norway, and stopped at whatever UNESCO sites or other historical sites looked interesting along the way.

Stay somewhere in the area overnight so you don’t feel pressured to hurry. We booked most of our accommodations through booking.com. The search box below is set to Ljusdal, which is pretty central. Use the map view to zoom out to get more options:

Don’t feel like you need to see all of the UNESCO farmhouses – we felt that the five we saw were plenty for a day and a half’s sightseeing. Remember that several of them need to be booked ahead of time, so plan your visits based on that.