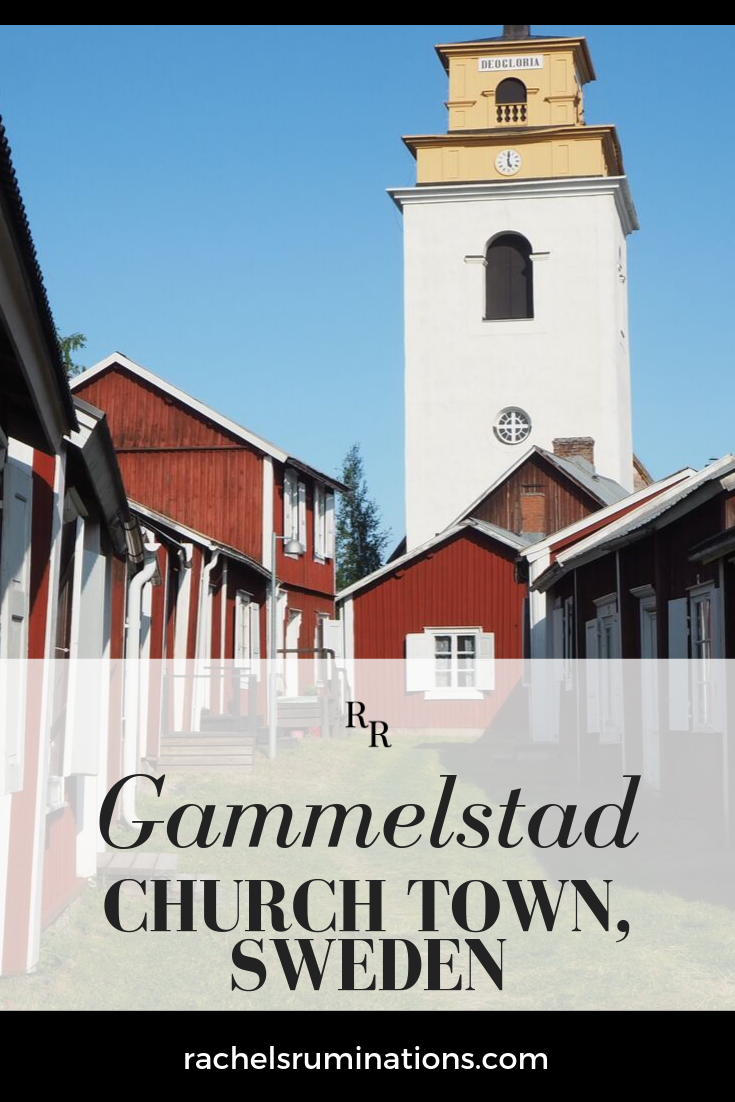 Back in the 17th century, not long after the Reformation turned Sweden Protestant, a new law required church attendance, depending on one’s distance from the church. People up in the cold north of Sweden, despite living on widely-scattered farms far from the nearest church, still had to get to church.

Disclosure: This article contain affiliate links. If you click on one and make a purchase, I will receive a small percentage of what you spend. This will not affect your price.

If you lived within ten kilometers, you were expected at church every Sunday. Up to twenty kilometers, and once every second week was enough. And so on. If no one from a family showed up, they got a fine, which would increase every time it happened.

Keep in mind that this was long before the advent of cars or even trains. They either walked or used carts or sleighs, depending on the time of year. This could be a miserable undertaking, of course, given the cold and/or rainy weather.

Their solution, born of necessity, was to travel on Saturday, stay overnight, and attend church on Sunday morning, returning home on Sunday afternoon or Monday.

For their overnight shelter, families built small cabins near the church, which, over time, grew to be functional small houses. These clusters of houses around the church became weekend communities in their own right: a center of social life for isolated farmers. While the law requiring attendance was weakened in the 18th century, the tradition continued.

There used to be more than 70 such communities across thinly-populated northern Sweden, but now only 16 remain. Gammelstad, a UNESCO site in Luleå, Sweden, is the best preserved.

The stone-built Catholic church in Luleå, formerly a harbor town, dates to the 15th century. It became a Protestant church (Lutheran), of course, after the Reformation.

The separate bell tower in front of the church was built in the mid-19th century, replacing an older one made of wood.

The “burgher quarter”, i.e. the homes of the merchants and leaders who traded here, stood not far from the church, forming a neat neighborhood of respectable one or two-story homes.

At the same time, the small houses of the weekend churchgoers huddled right around the church. The town grew organically outward from the church.

However, the town faced a problem that continues to this day: rising land. Apparently, since the last Ice Age, when it was weighed down under the heavy burden of ice, the land has been rising slowly in a process called postglacial rebound.

The problem for the inhabitants of Luleå was that the rising land made it increasingly difficult to use Luleå’s harbor, since it gradually got shallower. Eventually, in the 17th century, much of the town moved to another site, taking the name of Luleå with it. Some burghers stayed, though, in what now became known as Gammelstad, which means “old town.”

My husband and I explored Gammelstad with the help of an audio guide we rented at the UNESCO site’s visitor center. According to the audio guide, the new Reformation requirement to attend church wasn’t perceived as oppressive because Gammelstad was already the congregation’s community. Living so far apart from each other, this cluster of houses around the church was where people could socialize, the young people could court and so on.

One fun story on the audio guide explained that some weekends were designated for young people, and courting involved some pretty risqué behavior. A boy would knock on the window of a girl he liked and recite a poem for her. If she liked him back, she would invite him in and serve coffee and cake. Then he might be allowed to spend the night: fully-clothed, but together in one bed. Supposedly, it was perfectly acceptable for a boy to sleep with a different girl each weekend.

Gammelstad also served as a place to do business. The weekend residents would bring farm produce, for example, or pelts from the forests of the north, which the burghers of Luleå would buy.

Over 400 houses remain today, most of them tidy, single-story rectangles set closely together in somewhat ragged rows: this wasn’t a planned community, after all. Most of them these days are painted in the ubiquitous red of Sweden, with white trim. Originally they would have stayed grey: the color of plain exposed lumber.

The traditional Swedish red paint is called Falun Red, by the way, and was made originally from a byproduct of copper mining in the UNESCO mine in Falun. It has properties that help protect the wood, so that it lasts longer than other paints.

The houses appear to all be built of whole logs, squared off to pile neatly – apparently the original builders brought most of the building materials from their homes in the wood in the wintertime because it was easier to slide the heavy logs on a sled over snow than roll a heavily-laden carriage on rough roads. For most of the houses, you have to go around the back to see the logs: the fronts have been covered with a simple vertical paneling. Some of the windows have decorative edges, but most remain very simple and plain.

Gammelstad continues to be used as a church town today. Almost all of the houses are still in private hands, many handed down in families. Some have been updated with electricity and heating, while some remain original. Such modernization is up to the family that owns it, and they can also buy or sell these houses, but only according to strict rules because of Gammelstad’s UNESCO status.

No plumbing is allowed in Gammelstad. Unobtrusive, plumbed buildings have been added so that house owners can use the toilets and sinks, but without showers. This is to prevent anyone from living on a permanent full-time basis in Gammelstad, keeping to the original intention of the houses.

Instead, the owners still come on weekends – whether they attend church or not – and visit with neighboring families who’ve also been going there for generations. We visited on a Sunday and saw very few people. We spoke to one man who said that most just come for the day on Saturday. Even if they still live in their original family home in the country, a day trip is not a hardship in an age of cars and excellent roads.

We did see several people who were busy painting or otherwise doing work on their houses. We wondered how much upkeep they must take, and how much they sell for.

The more substantial houses of the burgher quarter, by the way, have been modernized and people are allowed to live in them full-time.

It is possible to see the inside of one of the houses. The show cottage at number 253-254 on Framlänningsvägen was built in the 18th century and is furnished inside as it might have been in the early 20th century, but it’s not a typical house. It’s the result of attaching two houses together by adding a hallway between, so it’s essentially twice as big as an original would have been. Nevertheless, I enjoyed seeing its homespun coziness, including a cabinet bed in the corner.

In Skellefteå, another church town: Bonnstan

Since we were on a rather tight schedule, with two weeks to get from the very north of Norway all the way home to the Netherlands, we didn’t try to visit the other 15 church towns around the north of Sweden. We did get to one more, though, called Bonnstan, in Skellefteå.

The houses in Bonnstan are larger than Gammelstad’s, and stand in neat, straight lines, with wide, straight roads between, unlike Gammelstad’s rather ragged layout. This may be because the earlier houses, from the 16th century and later, have burned down. After the first major fire in 1672, Bonnstan was rebuilt further from the church in order to protect it.

The worst fire was in 1835, burning almost all of the houses, and again the community was allowed to rebuild a bit further from the church. Periodic fires happened through the 19th and 20th century, and the most recent, in 2012, burned two houses down. Today there are 116 houses, while at its peak there were almost 400.

Most of the houses present today date to the 1830s and were updated in the 1940s. Many are two stories tall, generally a bit more complicated architecturally than the simple rectangles of Gammelstad. Plain brown wood on the outside, more of them show their log wall origins rather than covering up with paneling.

The houses range from two to eight “chambers”, and each room – 12-16 square meters – accommodates one family. Today there are almost 400 such chambers, all privately owned. They have no electricity and are heated using a fireplace.

The neoclassical church next to Bonnstan is large and and impressive, finished in 1800. Inside you’ll find sculptures dating to the Middle Ages.

Another surviving church town is also near Skellefteå. Called Lövånger, it is similar in size to Bonnstan. It looks different, though, because the houses are painted red, like in Gammelstad, but the shutters are vivid yellow, making a picturesque contrast.

Getting there: Bus 9 runs regularly from the bus station in Luleå to Gammelstad, taking about a half hour.

Where to stay: Booking.com lists 25 properties in Luleå, so you have plenty to choose from!

Visitor Center: Visiting Gammelstad is free, and the audio tour, which we found useful, costs 40 kroners. The visitor center also offers walking tours at 80 kroners per person (about €7.50 / $8). These can run as often as three times a day in the summer, down to just once a week in the fall and spring and not at all in the cold of winter.

The visitor center has a small exhibition upstairs (free) that we found useful for understanding the background of Gammelstad church town. It’s definitely worth a stop, and probably best to see it first, so you have a clearer idea of what you’re seeing as you wander the lanes of Gammelstad.

Visitor Center hours: Hours may vary but the usual hours are:

Church: The church is open Monday-Wednesday 11:00-15:00 with services at 11:00 on Sundays. It’s worth checking anyway because sometimes it’s open outside these hours and days.

Show cottage: The show cottage is open only in the summer more or less as follows:

Getting there: From the center of Skellefteå, walk about a kilometer west on Nygatan. It’s about a 15-minute walk.

Where to stay: Booking.com has 13 listings in Skellefteå to choose from.

Like Gammelstad, there is no fee for walking around Bonnstan, but it’s not as equipped for tourism: no visitor center, no museum.