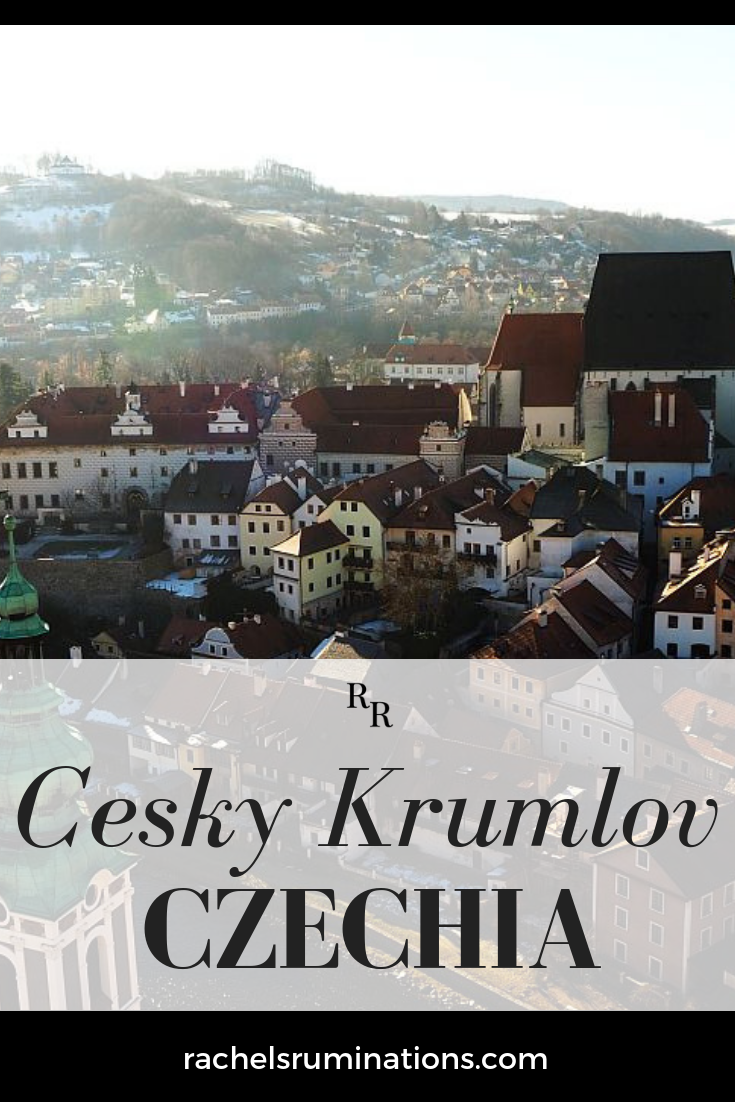 When we arrived at Cesky Krumlov in the Czech Republic, it was almost dark and we couldn’t see much. Following our GPS, we found our hotel, checked in, and ate dinner at a nearby restaurant. Nothing too exciting so far, but we’d come because the town is a listed UNESCO world heritage site, a designation that never fails to be interesting, no matter what country I visit. In the morning, Cesky Krumlov did not disappoint.

Cesky Krumlov (properly written as Český Krumlov), a completely intact medieval town, huddles around a meander in the Vitava River in south Bohemia. Its dominant landmark is a huge castle – second largest in Czechia after Prague Castle – looming on a rocky height in the middle of the town.

Cesky Krumlov castle’s design and location emphasize its size: set on a rocky cliff overlooking the river, extended with a series of walkways over a cleft in the hill. The walkways make the castle appear even bigger than it is.

In fact, the castle is a collection of buildings positioned around the edges of the hilltop. You can look at the layout in the screenshot below, taken from Google maps.

Originally built by the Vitkovci family starting in 1240, the castle passed to the Rosenberg family in the early 14th century, and they’re the ones responsible for adding the imposing upper castle, and updating it over the next couple of centuries.

The Rosenbergs sold the castle in the early 17th century to Viennese Emperor Rudolf II, who gave it to a powerful family, the Eggenbergs. This family updated the castle to a baroque style.

When the Eggenberg line died out in 1719, the Schwarzenbergs inherited it, keeping it until after World War II, when it became a property of the state.

If you’re thinking of visiting the Czech Republic, you really should check out these articles as well:

While the outside of the castle fascinates, we visited in February, and it was the wrong time of year to see the castle fully. The Czesky Krumlov Castle Museum was open, but was distinctly less interesting than the outside. A few rooms are furnished, but in a relatively modern form: the castle was used as an administrative building by the Czechoslovakian government after World War II, so, as you can imagine, the furnishings, such as they are, are more practical than elegant.

If you visit over the summer, you can take a guided tour to see some of the opulent period rooms upstairs. You can also tour the baroque theater, built in 1680-82 within the castle grounds. Still with its original mechanisms and sets, the theater is only used three times a year for a performance of a baroque opera. The garden sounds lovely too: restored to its full baroque formality.

Views from the castle

Nevertheless, even without seeing the restored and furnished rooms elsewhere in the castle, it was worth its admission fee because of the bridge that forms walkways over the cleft in the hill. From there, the view over the village, edged by the river below, is simply wonderful.

Things to do in Cesky Krumlov UNESCO site

Cesky Krumlov Castle is only one part of the UNESCO World Heritage designation. Officially, the site includes the whole historic center: “an outstanding example of a small central European medieval town whose architectural heritage has remained intact thanks to its peaceful evolution over more than five centuries,” according to the UNESCO website.

Cesky Krumlov isn’t a big town, and you’ll end up covering most of it by just strolling around randomly. And that stroll is an absolute joy at every turn. The cobbled streets twist and turn, crowded with shops and restaurants. Many of the buildings, which span the 13th to the 18th century, have been beautifully restored. In particular, make sure to look up at their facades, boasting a variety of artworks in stucco or paint above the ground floor. Here is just a small sample:

Namasti Svornosti, the old town’s central plaza, is where you’ll find the 16th century town hall and a plague column (1716), common to many towns in Czechia.

Just above the river stands the lovely St. Vitus Church. The gothic structure dates from the 15th century, and some frescos from the same century are visible inside. Check out the huge 17th-century Baroque altar.

Much of the interior, though, is “neogothic,” meaning it was renovated in the 19th century. The tall steeple, seeming even taller because of the church’s setting on a small rise, is also a 19th century addition.

If you can only visit one place in the Czech Republic outside of Prague, I think Cesky Krumlov should be first on your list. This is one of the most picturesque towns I’ve ever visited.

Getting there from Prague

Visiting Cesky Krumlov is quite doable as a day trip from Prague, but it would be a long day: about 3 hours on a FlixBus or RegioJet bus from Prague each way. Driving takes about 2.5 hours each way.

An alternative is to take a small group or private tour from Prague; it’s the easiest way because you don’t have to find your way around the bus system and you can leave the driving to someone else. The link will take you to a choice of several such tours.

Cesky Krumlov Castle Tour II is mostly about the Schwarzenberg family, including a portrait gallery and a whole series of furnished rooms. It’s available in June, July and August, Tuesday-Sunday, 9:00-17:00 and in September only on Saturday and Sunday between 9:00 and 16:00. It takes about an hour and costs 230 Kč (€9/$10) with “foreign commentary” and 190 Kč (€7/$8) with a translation.

Make sure to pin this article so you can find it again when you need it! The images below are formatted for Pinterest. Sharing on social media is good too!