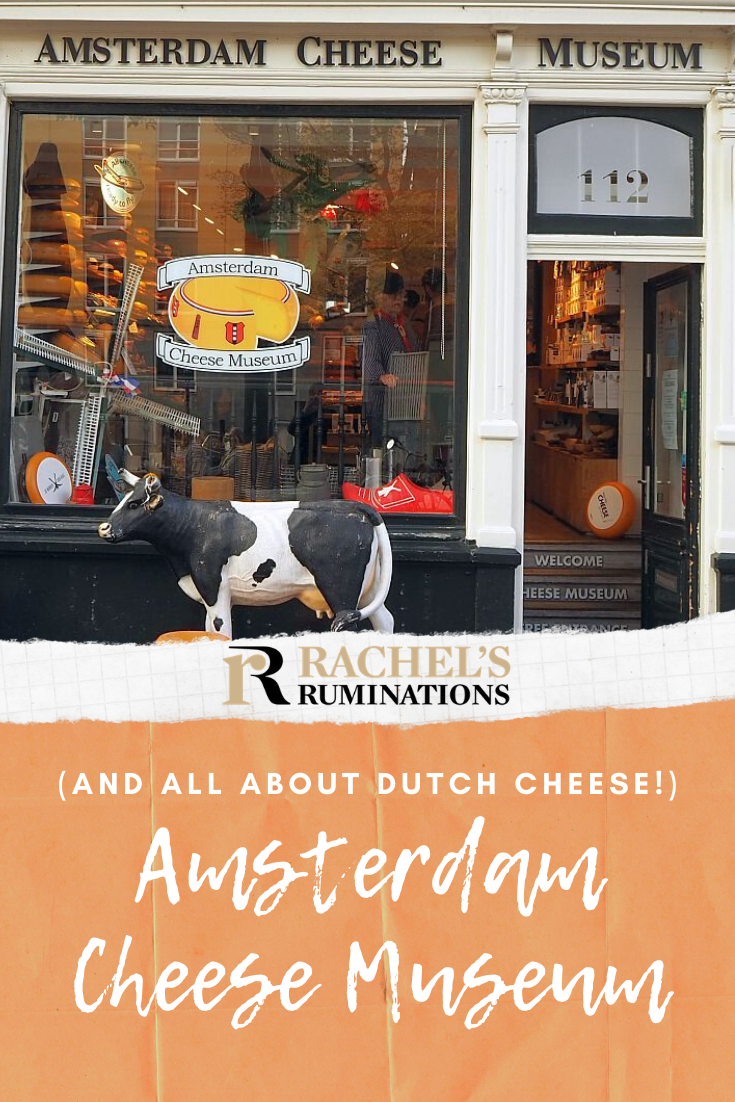 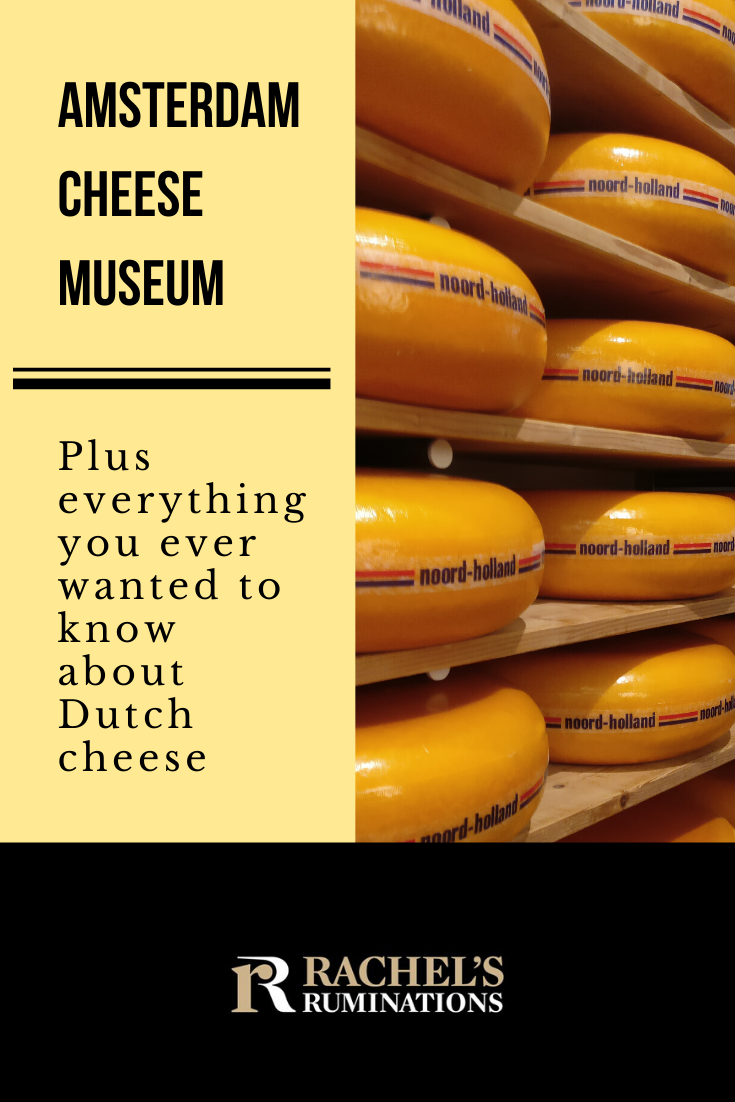 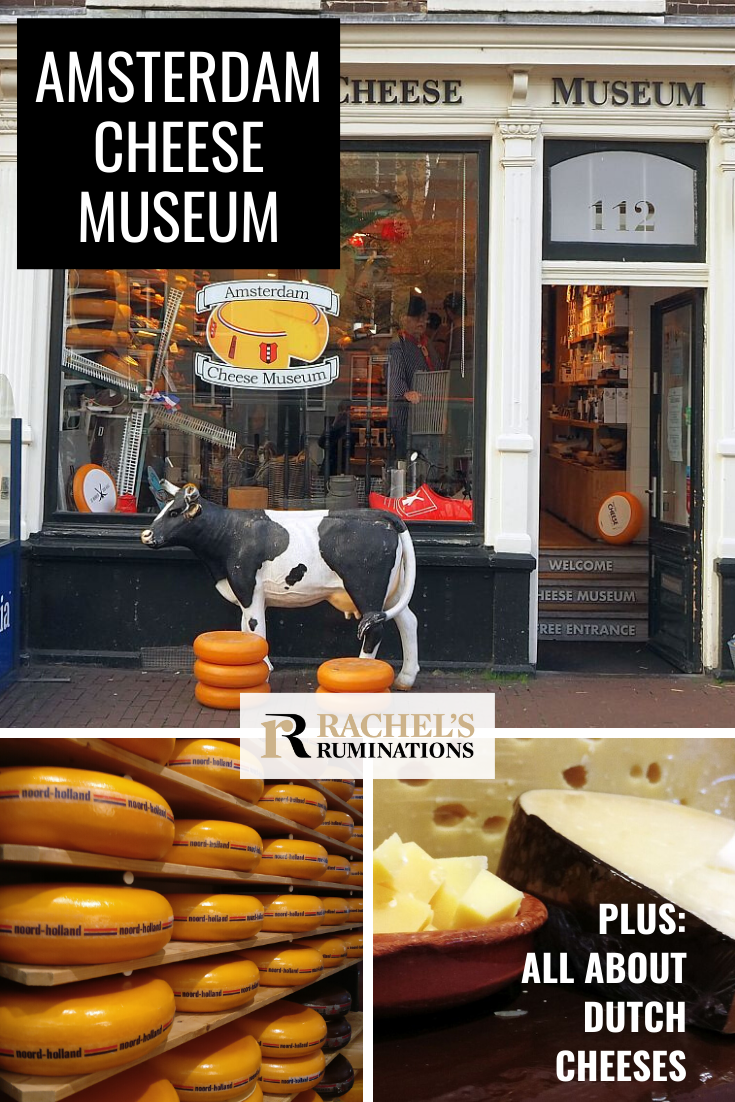 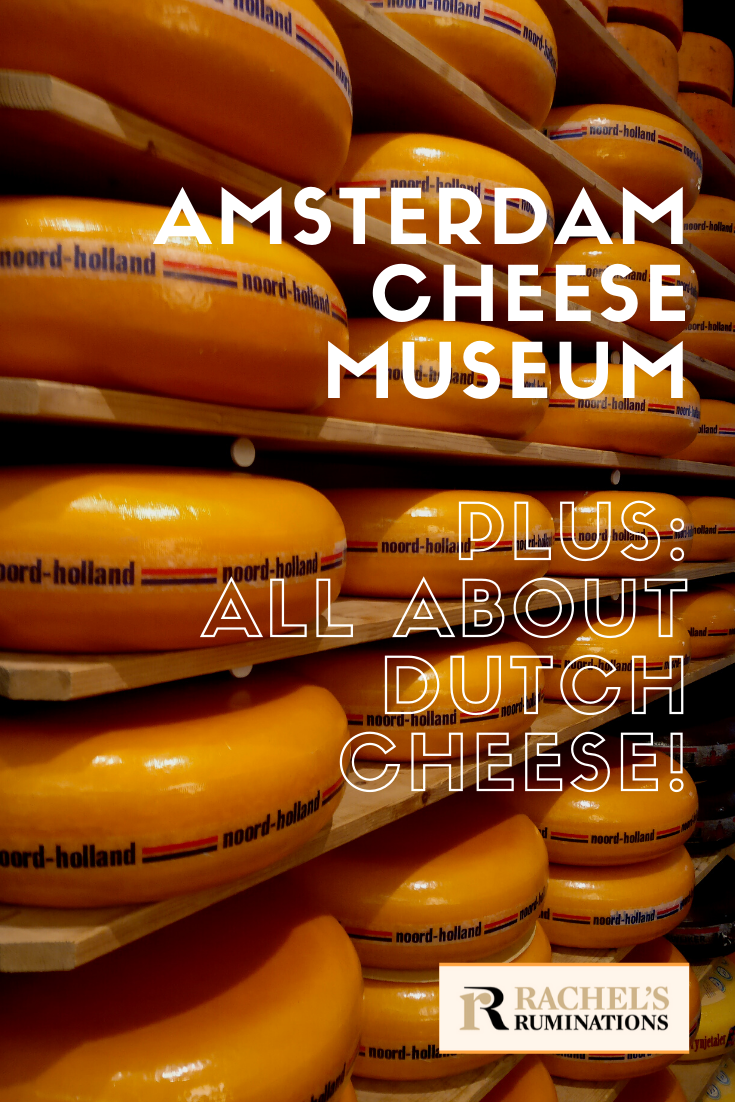 Amsterdam Cheese Museum isn’t really a museum: it’s a shop. It’s a very nice shop, mind you, where you get to taste lots of different Dutch cheeses before making a purchase. A bonus is that everything is labeled in English.

The museum part, however, is pretty minimal, but at least it’s free.

Getting to the Cheese Museum

The Amsterdam Cheese Museum looks like a regular storefront and when you step inside, it looks like a shop, with lots of cheese and other items like chocolate.

To get to the museum part, squirm your way through the cheese-tasting crowds to the very back of the store, where you’ll find the stairway down into the basement. The museum consists of a single basement room, holding a small exhibition about Dutch cheese.

It’s not a big room and the displays are along the sides and down the center. Here, you can learn all you ever wanted to know about Dutch cheese-making, present and past, with photos and explanations and old tools.

Signs explain all of the steps in the process of cheese production: what kinds of cows the milk comes from; how rennet is added to warmed-up milk; how the curds are separated from the whey, then pressed in molds to dry and thicken; and how it’s dipped in salt water, then aged on wooden shelves.

For children, there are costumes to try on, which I’m sure would make some cute photos.

It’ll take you about 10-15 minutes to see the whole thing. When you’ve finished, head back upstairs and do some tasting next.

I’ll get to my Amsterdam Cheese Museum review toward the end of this article, but first, let’s talk Dutch cheese.

While you’re here, check out my ongoing series about small museums in Amsterdam!

I’ve learned all the basics about Dutch cheese in the 20+ years I’ve lived here. After all, the Dutch take their cheese very seriously. In fact, the most popular type, called “Gouda” because it was originally produced in the town of Gouda, is often just called kaas here, which translates as “cheese.”

Edam (also named after a town) is similar to Gouda in flavor, but while Gouda is produced in huge, flat wheels of cheese, Edam is sold in much smaller ball-shaped wheels. Locals don’t buy whole wheels of either one; they buy a wedge, which, in a proper cheese shop, the seller will cut to the size you want.

Various brands of cheese will taste slightly different from each other. The most famous, Old Amsterdam (which sells young cheese as well as old, to confuse matters), has a slightly more intense flavor than some others. Boerenkaas, which means farmers cheese, often has a creamier flavor, and is made from unpasteurized milk. It’s not a brand but more of a sub-type of gouda.

Graskaas is cheese made from the first few milkings after the cows are released into the fields in the springtime. It’s supposed to be creamier and milder because of the young grass the cows eat, but I admit I’ve never tasted it.

Dutch cheese comes in a much bigger array of types and flavors than you’d think if you’ve only bought it as a treat in some other country.

The first variable is its age. The older the cheese is – in other words, how long it’s ripened – the sharper the flavor. The youngest cheese is called jong, meaning “young,” and it’s so mild it tastes pretty similar to butter, with a smooth texture. It’s only ripened for about a month. Old cheese is called oud; it has a much sharper flavor and crumbles easily. The cheese that’s halfway between is called belegen. There are more gradations as well, so the whole spectrum from youngest to oldest is this:

The zeer oud (very old) cheese is really sharp and very dry and crumbly, ripened for about a year. It can work nicely as a replacement for parmesan in cooking, but of course it’s the most expensive because of the long ripening period.

If the cheese says 48+, it was made with full-fat milk. 30+ is lighter, but it’s less creamy. 20+ is the serious dieter’s cheese, but the flavor just isn’t worth it, in my view.

Other flavors of cheese

Besides the standard age designations, other flavorings are often added to the cheese during production. The more traditional ones are netelkaas, with nettles, mosterdkaas (mustard cheese) with mustard seeds, nagelkaas (clove cheese), and komijnkaas (cumin cheese). These, in turn, can come in a range of ages.

Another option is smoked cheese (rookkaas), which is absolutely scrumptious on a cheeseburger!

Nowadays, though, the choices have expanded enormously: this shop that calls itself a museum has, for example, hot chili cheese, garlic cheese, truffle cheese, and several varieties of pesto cheese!

Goat and sheep milk cheeses are becoming increasingly popular as well. I’m not sure if this stems from environmental concerns – the Netherlands has a lot of cows, which have a bigger carbon footprint than other livestock – or if it’s based on flavor. These cheeses, if they’re from the Netherlands, are made in the same way as gouda, so the wheel won’t look much different. When you slice into it, though, the cheese will look whiter than cow’s milk Gouda, and the flavor is quite different, though the texture will be similar.

Goat and sheep milk cheeses have an earthier, stronger flavor, even when they’re jong or jong belegen.

How to eat Dutch cheese

I’ve really only seen Dutch people eat cheese in one of three ways.

Most commonly, they slice the cheese very thinly using a cheese slicer. (Please, if you did not grow up using a cheese slicer, use it very carefully!) Then, they make a sandwich with it: a thin layer of butter or margarine, then a single layer of cheese, usually on brown bread. For lunch, they’ll have one of these – to an American eye it’s only half a sandwich – and several other sandwiches with, for example, a single layer of ham or some peanut butter (thinly spread, and always with butter or margarine, never with jam) or hagel slag (chocolate sprinkles) or whatever else.

Dutch people often eat cheese on social occasions or in pubs, where the cheese is cut into bite-sized chunks and served as a nibble.

Third, Dutch cheese is quite useful for cooking: it melts nicely, more like Monterey Jack than cheddar. If you’re going to use it for cooking, don’t go riper than belegen. The older cheeses are stronger tasting but don’t melt readily like the younger cheeses do.

Amsterdam Cheese Museum review: is it worth visiting?

If you happen to be in the neighborhood, go ahead and stop in. It’s free, and even if you have no interest in learning about cheese-making, you can taste lots of cheeses. I’d suggest first tasting plain cheese in order of age: young to old. After that, taste whatever else strikes your fancy.

The Tulip Museum is another one that’s part shop and part museum, but the museum part is a bit more substantial. Read my review of the Tulip Museum.

Any proper cheese shop (in other words, not a supermarket) will also let you taste cheeses, and most likely without the crowds. They’ll often have bits of cheese in little cups for you to help yourself. Even if they don’t, it’s perfectly acceptable to ask for some tastes to help you decide what to buy. They’ll use a cheese slicer to shave off a bit for you.

If you’re going to buy cheese to take home, ask that your wedge be vacuum-packed; most cheese shops have the machine to do so. It’ll last several weeks outside of a fridge that way. Your other choice is to buy a whole wheel, which is really only practical if you buy Edam rather than Gouda, or some of the mini-rounds they produce for tourists. A wheel can last for months if you don’t cut it open. After that, or after opening your vacuum-pack of gouda, it’s best to keep it in the fridge.

Dutch cheeses are generally priced by the kilo, though sometimes they’re priced per 100 grams. In supermarkets, they’re usually cut into wedges with the price already marked. In a cheese shop, the person behind the counter will ask you to indicate how much you want them to cut off the wheel for you. They’ll weigh it and get your okay before wrapping it up.

A warning: Apparently Dutch gouda has the exact same density as plastic explosives. Security has stopped me at Schiphol airport a number of times to have my bag opened and examined. It’s not a problem, but be aware that it might slow you down at security. When you pack your carry-on bag, make sure any wires from any electronics are far from the cheese. It’s the combination of plastic explosives and wiring that security personnel watch for. I assume that if you pack cheese in your checked bags, they’re likely to get opened, which is why I usually carry it on.

If I’ve forgotten any information here that you’d like to know about Dutch cheeses, please add your question below and I’ll answer it for you. Please also share this article on your favorite social media!