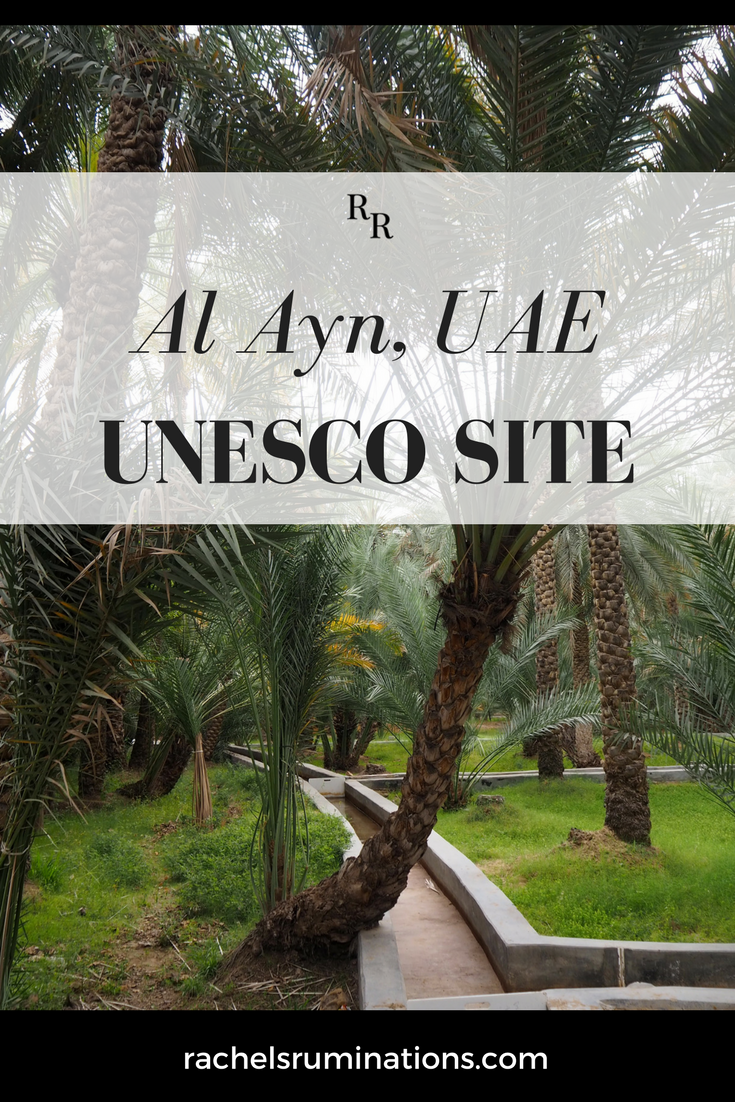 “We go to camel market?” Nishad asked, glancing over at me. I had, contrary to custom in Dubai, chosen to sit in the front seat of the taxi, explaining that I could see the scenery better from there.

I had hired Nishad as a driver for the day, not as a guide, but he was clearly used to taking visitors to the standard tourist destinations.

On previous trips, I had looked for Dubai historical sites, as I tend to do wherever I travel.  I wrote then about the Bastakiya district of Old Dubai.

(Disclosure: This article contains affiliate links, which means I get a small cut of what you spend through the link. This will not affect your price.)

The United Arab Emirates as a whole, however, has only one UNESCO World Heritage site: Al Ayn, also written as Al Ain, which is in the Abu Dhabi emirate. An ancient oasis in the desert, halfway between Muscat and Abu Dhabi, the Al Ayn UNESCO site is really an amalgamation of more than a dozen different sites in and nearby the city of Al Ayn.

I wanted to see as many as I could that day, so I booked a day trip from Dubai. (You could also visit in a day from Abu Dhabi.)

The problem was that I wasn’t well-prepared, and neither was Nishad. I had scribbled the names of what I wanted to see on a sheet of paper, assuming my driver would know where they were. But Nishad didn’t even recognize some of the names. I speak no Arabic, and his English was quite limited, so I couldn’t explain what they were to him in a way that he would understand. Googling them didn’t help either, leading us, at one point, to a mosque that shared the name of one of the sites.

Despite our communication and navigation problems, though, I managed to see the highlights of Al Ayn that day:

If you’d rather stay in Dubai, read Things to Do in Dubai.

The Oases at Al Ain

The oases at Al Ayn have been supporting populations in the desert for about 5000 years. Here, where water was available, people who had originally been nomadic hunters eventually developed irrigation systems called aflaj (The singular form is falaj.), which in turn allowed them to stay in one place.

The aflaj system involves wells, dug downwards on higher elevations, which are then connected to each other through an underground system. These tunnels lead the water downhill to the irrigation channels where it is needed. Evidence of these ancient systems has been found that dates back to the first millennium BCE.

The two oases that I briefly visited still use aflaj today to grow date palms. Walls line the roads we walked and drove on, punctuated here and there with doorways. These doorways lead to short stairways down to the level where the date palms grow and where the irrigation channels wind through the trees.

Strolling among the trees, stepping over the irrigation channels, I could hear birds singing and the rustling of the palms above my head in the breeze. It felt cooler there, and smelled fertile and damp, a relief from the dry dustiness of Dubai. I could see why city dwellers in Dubai and Abu Dhabi come here on their days off.

The UNESCO site at Al Ayn includes seven distinct oases, two of which I visited. Al Ain Oasis is the largest, and the most welcoming to visitors, with explanatory signs in English, an “Eco-Centre experience” at the entrance, and a dedicated app to help tourists learn about the oasis and find their way around.

Also at Al Ain oasis is the Al Ain Palace Museum. Once the home of Sheikh Zayed bin Sultan Al Nahyan, the first president of the UAE, it isn’t particularly old. Built in 1937, it is maintained in its original state, looking as it would have for the family as well as for official receptions for important state guests.

The palace is a sprawling complex of buildings interspersed with pretty green courtyards. It appears that every person who stayed in the palace had to have a bedroom and a reception room and a coffee room.

Reception rooms and coffee rooms look pretty much the same to me: sofas line three walls, low to the ground and upholstered in bright colors. In the middle stands a low table that seems to serve as a stove. I didn’t find any explanation of the reception room/coffee room dichotomy: is there some reason that coffee can’t be enjoyed in a reception room? Or why people can’t be received in a coffee room?

Part of the Al Ayn UNESCO collection is a cluster called the Hili Assemblage. For some reason, the Hili Archaeological Park is only open in the evenings, so we didn’t get to see it. Apparently it contains a “grand tomb” of the Umm Al-Nar civilization, dating to 2500 to 2000 BCE. It’s a circular tomb and largely restored. The park is also home to some unrestored remnants of forts and houses.

However, I did get to see Hili Tower and Al Jahili Fort.

Hili Tower is a small, round mud-brick tower meant for the defense of Hili Oasis. It has been entirely rebuilt using some of the original bricks.

Al Jahili Fort is a much grander affair: a sort of cross between a fortress and a castle in appearance. With its mud-brick walls, watchtowers and battlements, in form it has much in common with Europe’s medieval castles. It isn’t actually that old, however, dating to 1891.

Used today as an exhibition space, Al Jahili Fort doesn’t give much indication of what the fort might have been like originally. The exhibits are interesting, though, and worth at least a walk-through. The exhibition about Wilfred Thesinger and his friendship with Sheikh Zayed Bin Sultan Al Nahyan is full of photos that Thesinger took showing the area as it was in the period after World War II.

Jebel Hafeet is a 1240-meter-high mountain just outside of Al Ayn. Somewhere in the foothills of Jebel Hafeet are the ruins of over 500 round stone tombs that are 5000 years old. I couldn’t figure out from an online search quite where they were, and Nishad hadn’t heard of them.

Nevertheless, we drove up the dramatically craggy mountain. The road and the viewpoint parking lot at the top offer breathtaking views, somewhat diminished on the day I was there by cloudy skies and haziness. I could see over the border into Oman on one side and overlooked what I think were some of Al Ayn’s growing suburbs on the other side.

Besides the tombs at Jebel Hafeet that I couldn’t find and Hili Archeological Park, which was closed, I also failed to see Bida Bint Saud. Despite Google Maps’ insistence that it’s a mosque inside Al Ayn city, Bida Bin Saud is actually a hilltop somewhere outside the city with the remains of ancient tombs and evidence of a 3000-year-old falaj.

Nevertheless, I did get to learn about these traces of ancient societies at the Al Ain National Museum. Artifacts from all the ancient Stone, Bronze and Iron Age sites are on display here, along with some anthropological exhibits about the region’s population.

Don’t expect anything high-tech here. This is an old-fashioned museum, for the most part, with objects in cases, neatly labeled: figurines, containers, tools, and so on. Nevertheless, after the difficulties I’d had seeing any of the archaeological sites, it was good to at least be able to see the artefacts from them and get the bigger picture of the area’s history.

Is Al Ayn worth visiting?

That question is hard to answer. I definitely enjoyed the Al Ain Palace Museum, as well as walking around an oasis, and driving up Jebel Hafeet. The archeological sites are hard to find, which makes me think that either a) the UAE and/or Abu Dhabi government just hasn’t developed and signposted them yet for tourism, or else b) they’re just not interesting enough to develop for tourism.

So it’s clear why it’s important historically, but, compared to other UNESCO sites I’ve visited – and I’ve seen quite a few – Al Ayn didn’t give me that gasp of awe that I’ve come to expect.

Perhaps the camel market would have.

Have you been to Al Ayn? Did you manage to see any of the archeological sites I missed? Please add a comment below. And if you liked this article, please share it around. The photos below are perfect for pinning!

Getting there: You can get to Al Ayn by bus from the main Dubai bus station or from Abu Dhabi. To see the sights, you’ll really need a car, though, so either take a taxi from your hotel for the day or pick up a taxi when you arrive at Al Ayn. My driver in March 2018 cost 900 dhs for the day, about €200 or $250.

An easier option would be to sign up for this tour to Al Ayn from Dubai or this one. They both cover pretty much what I did when I visited.

Hili Tower: outside Hili Oasis. The building is closed but can be viewed from the outside.

Hili Archeological Park: Mohammed Bin Khalifa St. (10 km outside the city on the road to Dubai). Admission free. Open 16-23:00 “for families only.”

Jebel Hafeet: Free access to drive nearly to the top.