My son has decided he wants to go to university in Scotland. After investigating the possibilities on line, he applied to five universities that offered the sort of program he was looking for.

It didn’t really occur to him that perhaps he should consider other factors in his choice. Would he prefer an urban or a campus setting? What are the student accommodations like? Do they have the athletic facilities he wants to use? And so on. 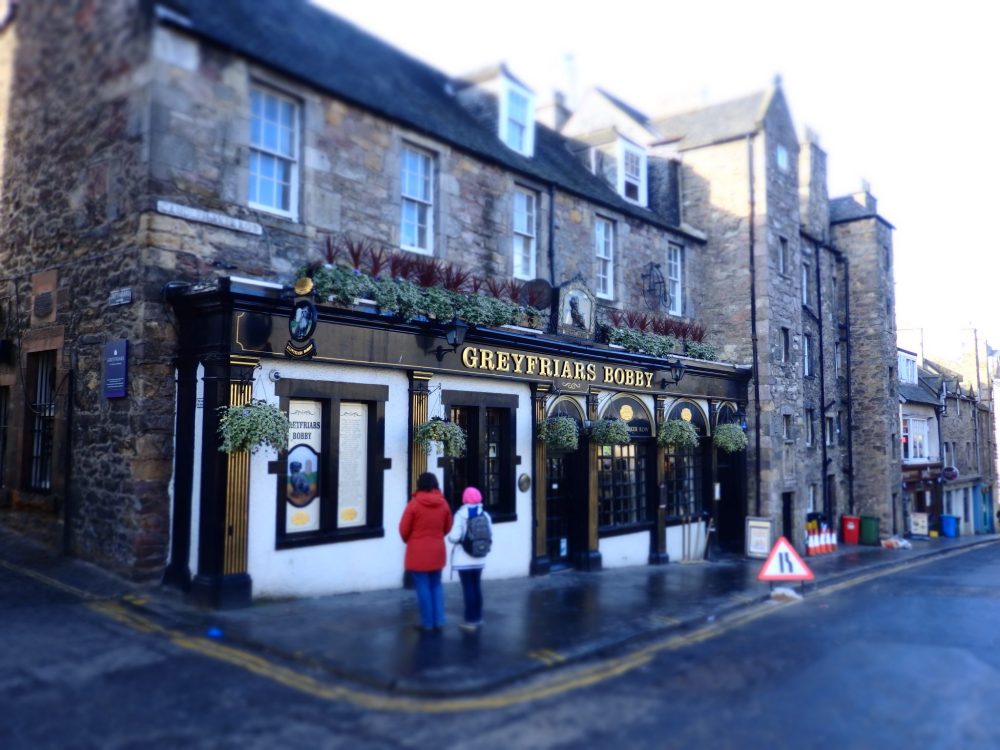 A pub near the University of Edinburgh campus

This is what brought us on a whirlwind visit to Scotland in February: five universities in four days. The scenery we passed on the road as we sped in our rental car from Edinburgh to Aberdeen to Dundee to Stirling and back to Edinburgh, was surprisingly green for early February (all that rain!), rugged, and breathtakingly beautiful. We passed tidy, rolling, plowed fields with picturesque farmhouses nestled under mountains, showing traces of winter’s snowfall.

In Edinburgh, we could see the castle in the distance, but we didn’t have time to go see it. On the way to Aberdeen, we passed turnoffs to a number of castles along the coast that I would have liked to visit. The coastline itself, I’ve heard, is lovely. In Aberdeen, I would have loved to tour the Maritime Museum.

The Wallace memorial: strange tower on a hill

So once we arrived at Stirling, the last university on the list – and had an hour or so before our campus tour appointment – we decided to go check out a strange-looking tower we could see on a nearby hill: the National Wallace Monument. 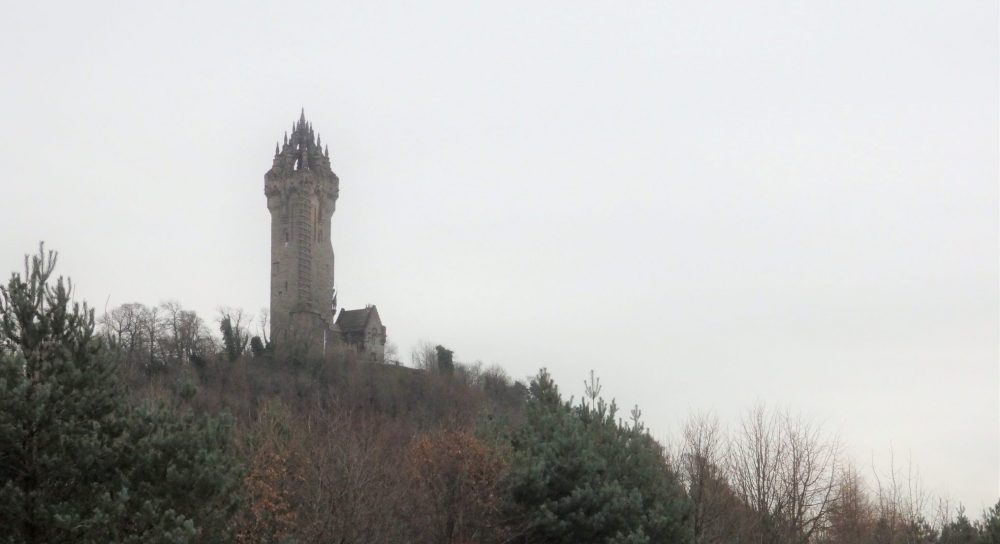 The Wallace memorial as seen from the Stirling University campus

When we arrived at the visitor’s center below the tower, we learned that it is a monument to a Scottish national hero: William Wallace. Wallace is revered in Scotland because of his 1297 victory over the army of the English king, Edward I, at the Battle of Stirling Bridge. In the movie Braveheart, Mel Gibson portrays a historically inaccurate version of William Wallace. 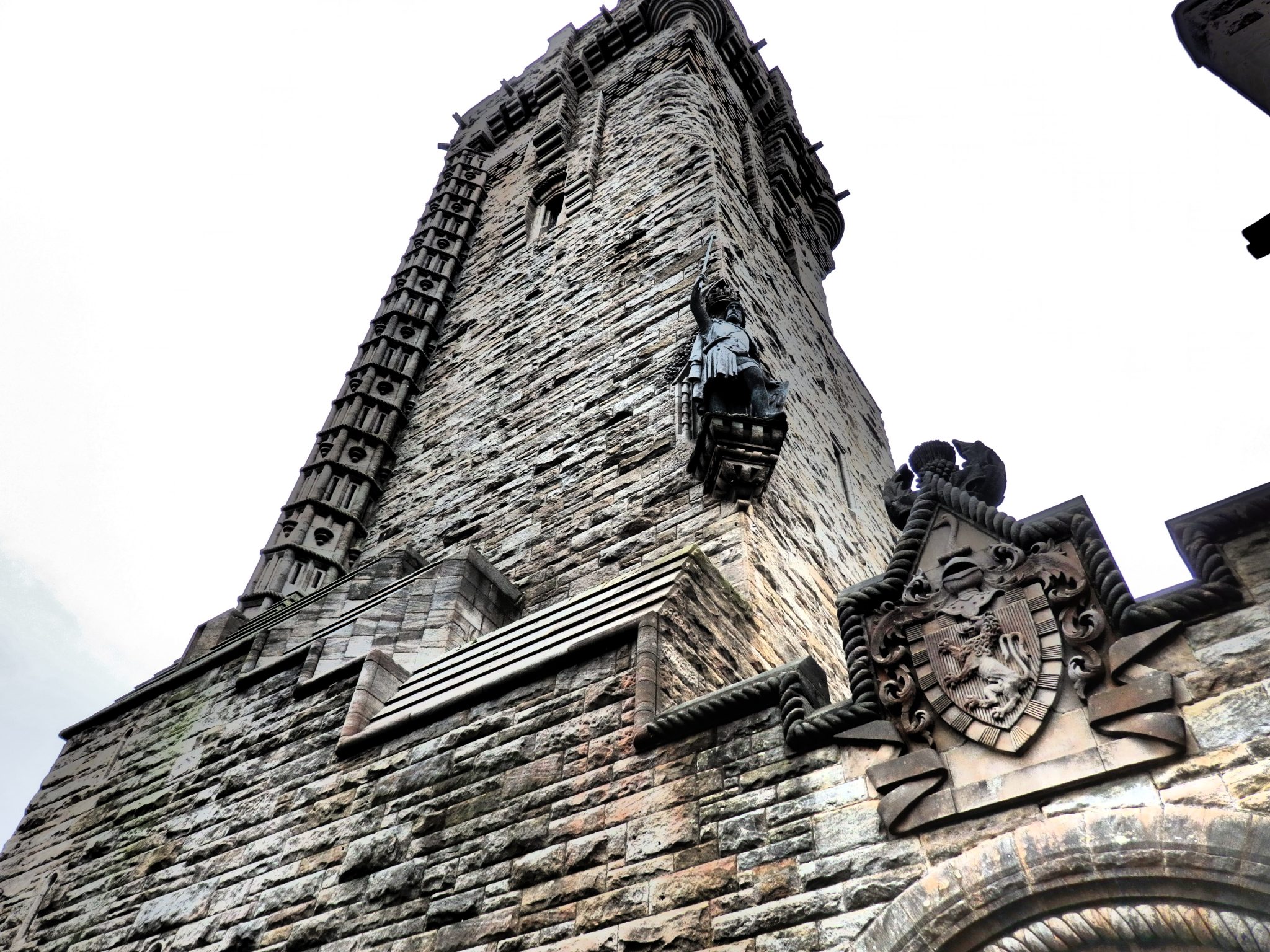 The Wallace memorial as seen from its base, complete with a statue of William Wallace.

The Wallace memorial and Scottish nationalism

Inside, as we climbed our way to the top of the tower (246 steps), we passed through a series of rooms, all of them expressive of Scottish nationalism.

The first, the Hall of Arms, illustrates the Battle of Stirling Bridge and Wallace’s part in it.

The second, the Hall of Heroes, links Wallace as an inspiration to other famous Scots. Besides one case containing Wallace’s long sword, the room is filled with busts of famous Scots. Were they in reality inspired by Wallace’s battle against the English? It seems to be taken as a given here. 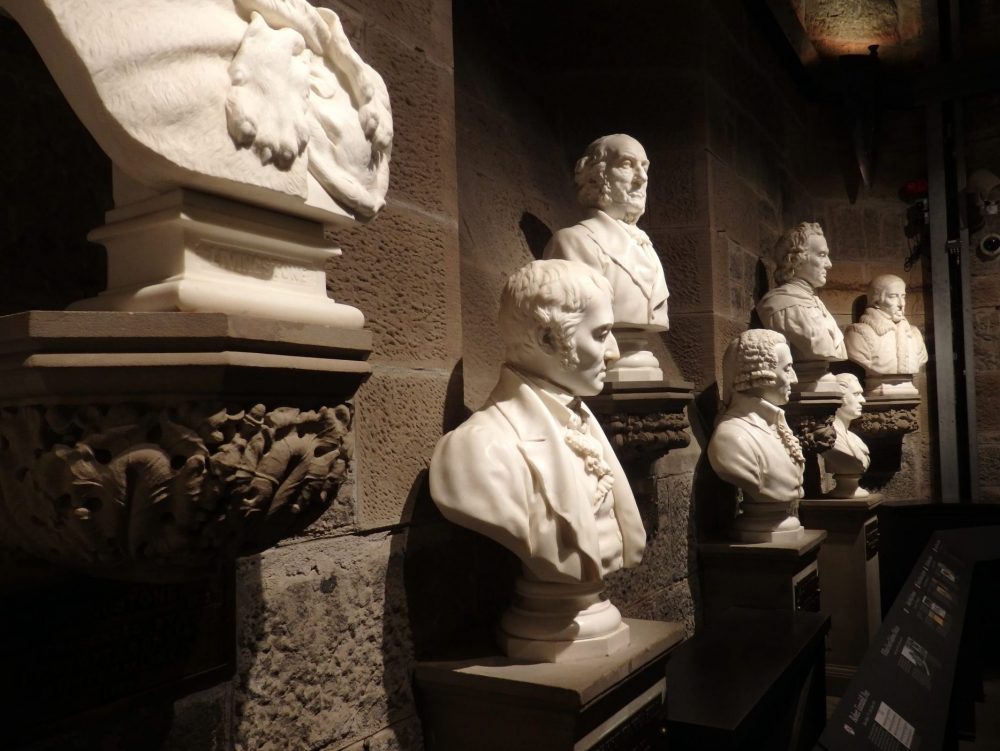 To ameliorate the “dead white men” aspect of this room, a special exhibit was underway. It showed prominent Scottish women in history: clearly a recent afterthought, but nevertheless interesting.

The third and final room, called the Royal Chamber, focuses on the monument itself and how it was built.

Here is where it became clearer to me why the Wallace memorial looks like it does. It dates from the 1860s, the Victorian period, when architecture tended to try to out-medieval the medieval. I learned that the style is Scottish Baronial, and includes features of traditional Scottish architecture. According to Wikipedia, the style is Victorian Gothic. [tweetthis hidden_hashtags=”#travel”]The Victorian period: when architecture tried to out-medieval the medieval.[/tweetthis]

The crown on the Wallace memorial

The best part of the visit for us was the “Crown”, i.e. the top, of the tower. There, we could walk outside on the roof, under the decorative structure that certainly resembles a crown. At 67 meters, it’s not a very tall tower, but its placement on the top of a hill makes the view from the crown, even on such a cloudy day, delightful.

Looking down gave us a clear idea of the layout of Stirling University campus next door. 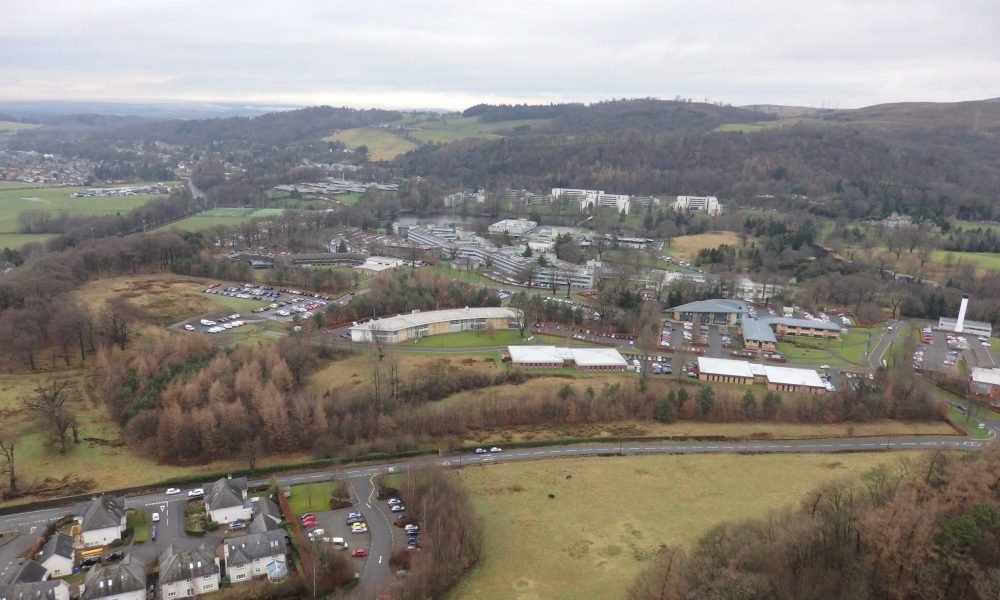 The Stirling University campus as seen from the Wallace memorial.

In the middle distance we could see the meandering River Forth. With the help of signs along the railings, we could pick out where each part of the Battle of Stirling Bridge happened. 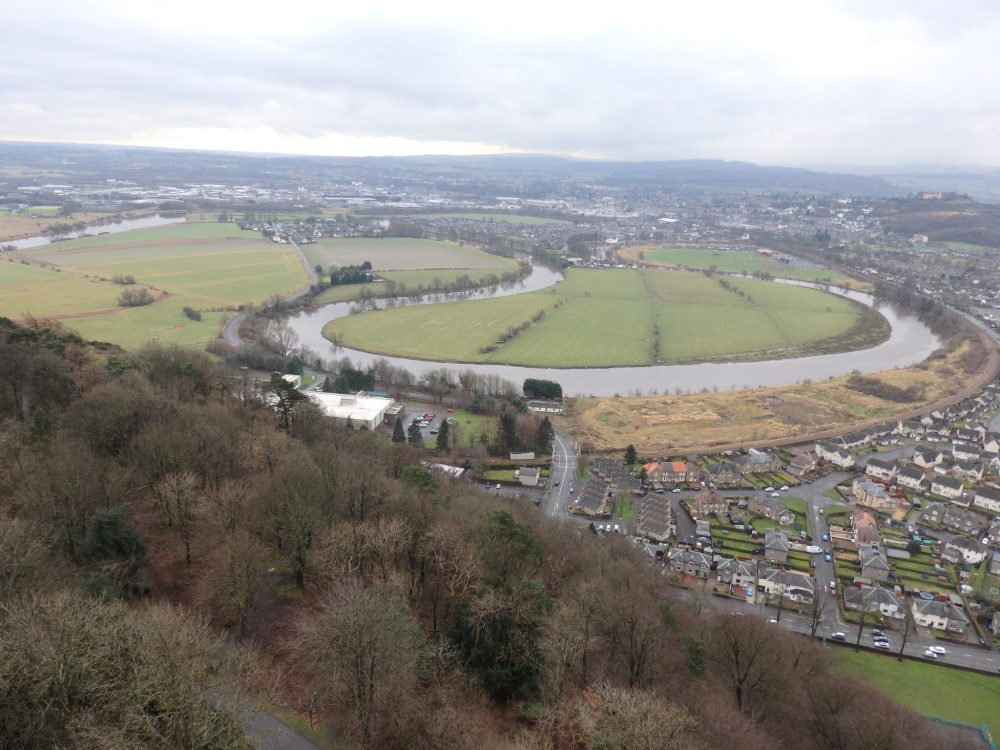 The River Forth meanders through the valley

Across the river, perched on another hill, we could spot Stirling Castle, another sight I would have loved to see from nearer by. 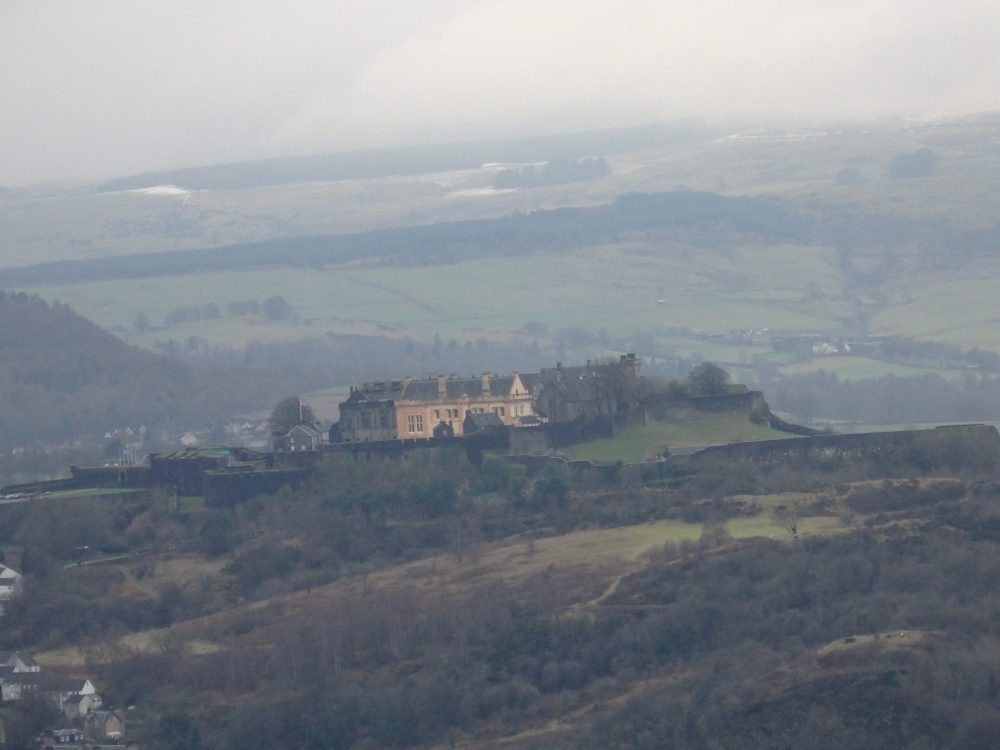 Stirling Castle, as seen by zooming my little compact camera as far as it would go.

My son is still planning to study in Scotland. Right now we’re waiting for his exam results to see if he can attend his first choice university, Aberdeen. (Note added in December 2018: He got in! He’s now in his second year and loving it!)

I, meanwhile, want to see more of Scotland than just five college campuses and one odd Victorian tower. I doubt I’ll climb the National Wallace Monument again, but sometime in the next few years, I’ll look for its misshapen form in the distance while I enjoy Stirling Castle.

I expect to do a lot of sightseeing in Scotland in the next four years! What do you recommend I see? Add a comment below! 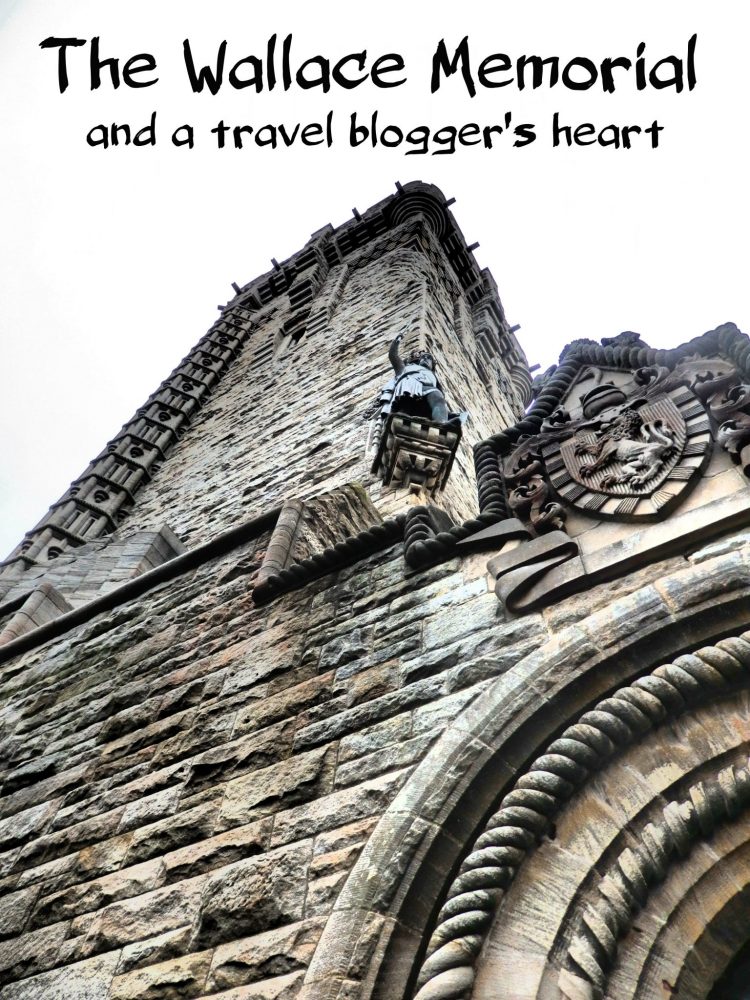