After learning about how “Rosie the Riveter” constructed Liberty Ships in the Kaiser Shipyards in Richmond, across the bay from San Francisco, it seemed to me that the obvious next step was to tour an actual Liberty Ship. (See my post on the Rosie the Riveter Museum here.) I ended up seeing not only a Liberty Ship, the SS Jeremiah O’Brien, but also a World War II submarine, the USS Pampanito.

The SS Jeremiah O’Brien was built in Maine, not Richmond, but all 18 shipyards around the country that produced Liberty Ships followed the same design. It served in the war carrying supplies for troops around the world, including Normandy during the D-Day invasion. 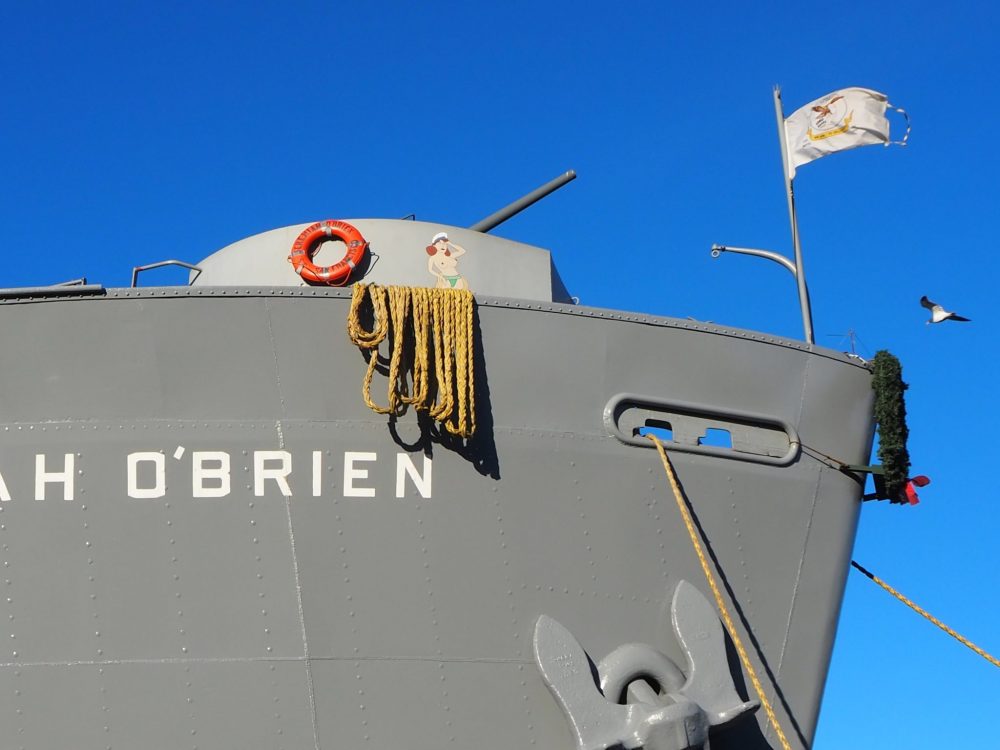 The bow of the Jeremiah O’Brien

What’s special about the Jeremiah O’Brien is that it is in its original state. In full working order, a team of volunteers restored it, staffs it, maintains it, and takes it out on cruises around San Francisco Bay.

In total, 2710 Liberty Ships were built during the war. Originally meant as cargo transports, some were later converted for troop transport and, after the Allied victory in North Africa, for transport of prisoners of war.

More than 2400 Liberty ships outlasted the war to be bought for use as cargo ships by private companies. Today, only three remain, two of which are museum ships.

(Victory Ships, by the way, had a similar design, but were a bit larger and faster. The SS Red Oak Victory, docked in Richmond, is one of these.)

After I paid admission, a volunteer handed me a flyer with a simple map of the ship and pointed me up the gangway. Happy to be able to explore the ship at my own pace, I took my time. On an off-season weekday afternoon, I had the ship almost to myself.

It was easy to imagine what it was like to sail on this ship. Visitors may not enter many of the rooms, but I could look into all of them. The beds were made up neatly in the crew’s quarters – and sometimes not so neatly. I could see belongings on beds, chairs, or hung on the walls. It looked as if the crew had only just left. Judging from the kinds of items I saw – modern backpacks, for example, and laminated i.d. cards on lanyards, I’m pretty sure the volunteers who maintain and operate the ship still use the crew’s quarters. Other rooms looked they might have during the war. The kitchen and mess area are still in use, it was clear, presumably by the volunteers. 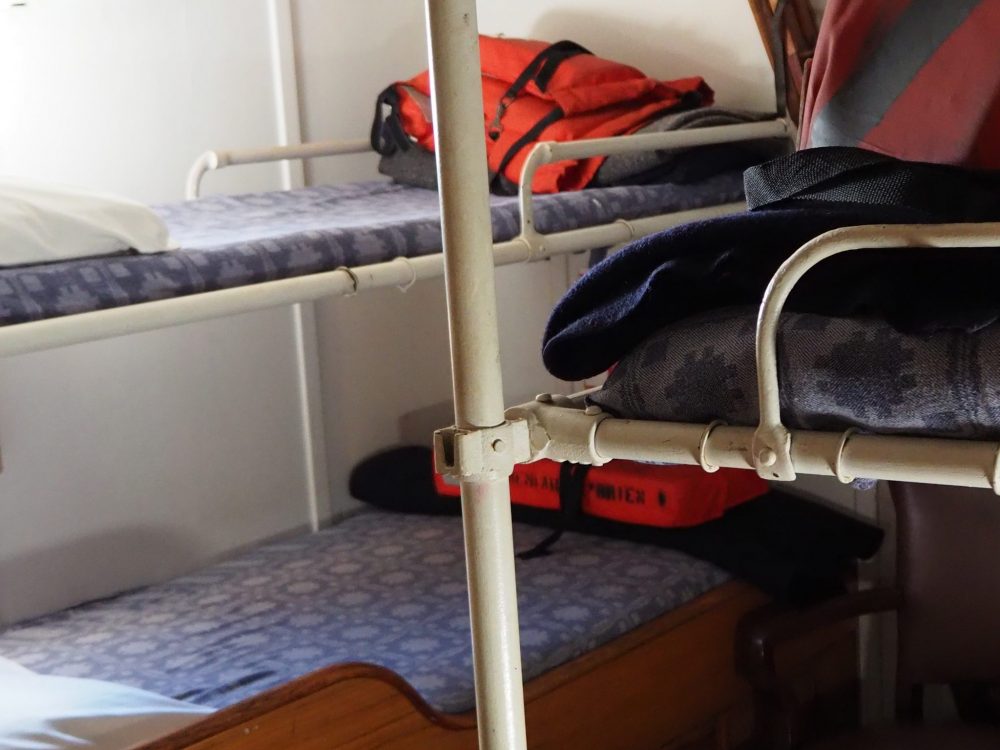 bunks on the SS Jeremiah O’Brien

The ship originally carried 41 civilian merchant mariners and 18 navy gunners, who traveled with the ship to defend it in case of attack. I imagine that voyages entailed long periods of dull routine – cleaning and maintenance – interspersed with short periods of tension and fear, as they entered areas with active conflict.

Besides the main deck with the crew’s living quarters, visitors can climb the stairs and ladders up or down. On the boat deck upstairs, I could see offices and living quarters of the officers. Further up, on the bridge deck, are the Captain’s quarters and the chart room – now with GPS navigation. This deck is also home to the radio room – still in working order – and the bridge. 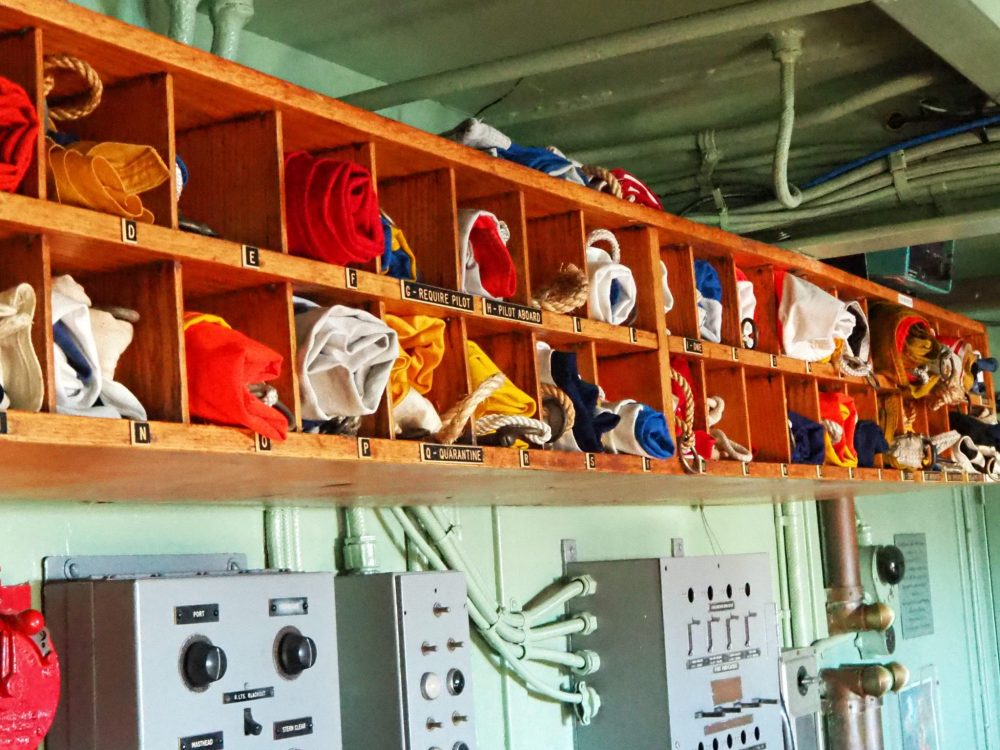 Downstairs from the main deck is the engine room, a maze of machinery that was completely incomprehensible to me. A sign explains how this 3-cyclinder triple expansion engine works. 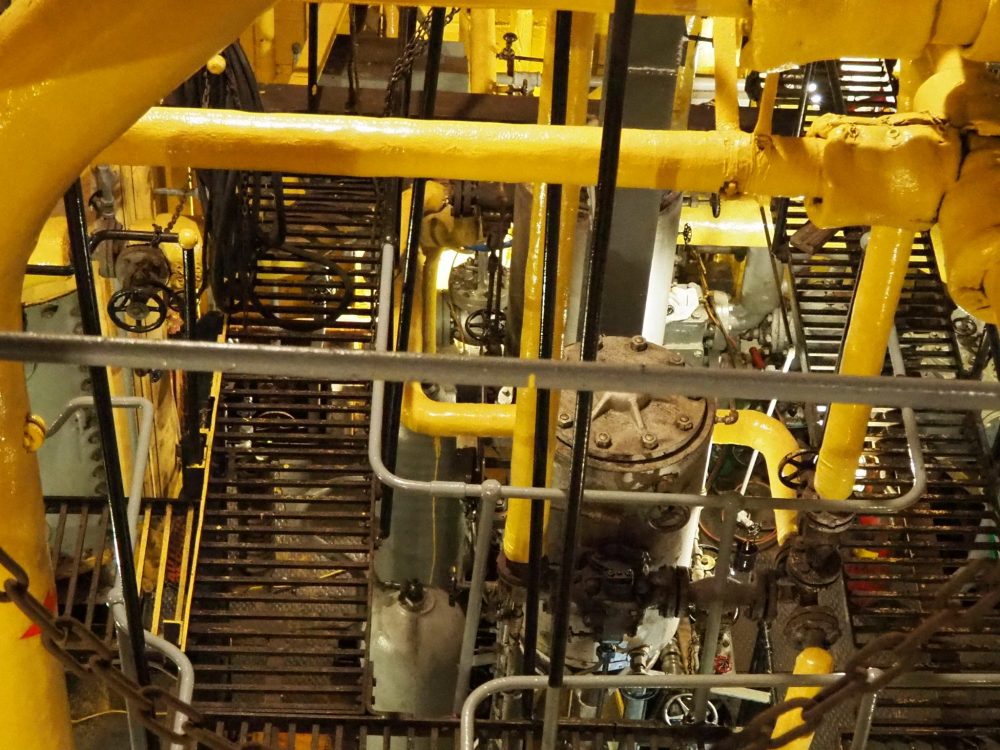 Also below are the cargo spaces: a section of one of the spaces provides room for a small museum and event space. If you visit, make sure to peer down through the glass-covered hole. Looking down will give you a sense of the size of the cargo hold. Liberty Ships could carry 10,000 metric tons of cargo.

Outdoors, on the deck of the SS Jeremiah O’Brien, I could investigate the lives of the accompanying navy gunners. Their guns sat up high, making them easy targets. For that reason, the machine guns are surrounded by concrete walls meant to protect the gunner. 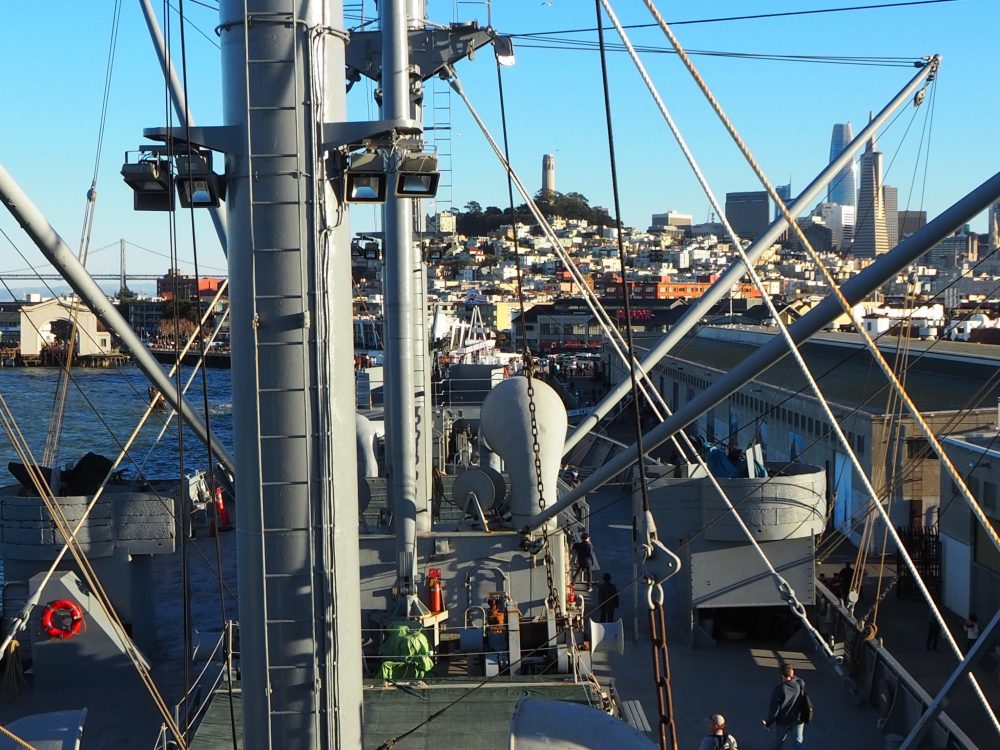 The SS Jeremiah O’Brien is moored at Pier 45, the next major pier to the tourist mecca at Pier 39, which I wrote about on my last trip to San Francisco. From its decks I had some great views. Looking toward the city, I could see Telegraph Hill with Coit Tower at its peak, and, beyond that, the city center with its skyscrapers. On San Francisco Bay, modern cargo ships passed, laden with piles of shipping containers. Looking toward the Bay, I could see the new sections of the Bay Bridge, a suspension bridge. Looking the other way, toward the ocean, I could see the elegant curve of the Golden Gate Bridge.

While I expected to visit a Liberty Ship, I was pleased to see, moored in front of the SS Jeremiah O’Brien, a World War II submarine, the USS Pampanito. 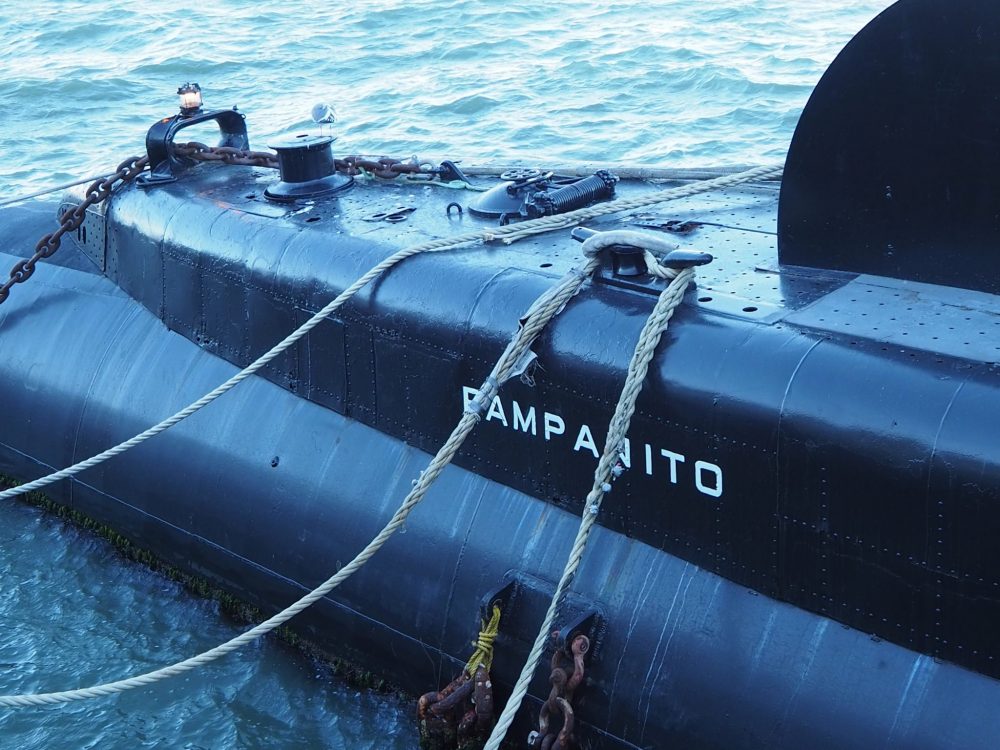 The bow of the USS Pampanito

In this case, after paying admission, I received a set of headphones and an ipod. In each section of the submarine, an audio recording played automatically. Telling the history of the ship, including testimony of men who served on it, the recording distinctly added to my understanding of what I was seeing.

On the day I visited in December, San Francisco was experiencing strong winds, enough for my phone to send me regular wind advisory messages. While I did not feel any effect of this on the SS Jeremiah O’Brien, I certainly felt it inside the much smaller USS Pampanito. It rocked noticeably in the rough water. The movement added to the sense of claustrophobia that must have been part of everyday life on board a submarine.

This particular submarine, built in 1943, carried out six patrols in the Pacific in a little more than a year. It sank six Japanese ships and damaged four more. On one of its patrols, it picked up 79 Australian and British POWs who had been floating on rafts for days after the Japanese ship transporting them sank. Saving them, the submarine’s crew almost doubled in population for the five days it took to get to the nearest Allied port.

Visiting this ship is not for the claustrophobic, and not for anyone with physical limitations. Except for one added hatch, the submarine is unchanged, so moving from one “room” to the next involves stepping up and over a raised threshold through an oval porthole. It’s best to climb the stairways backwards, like a ladder. 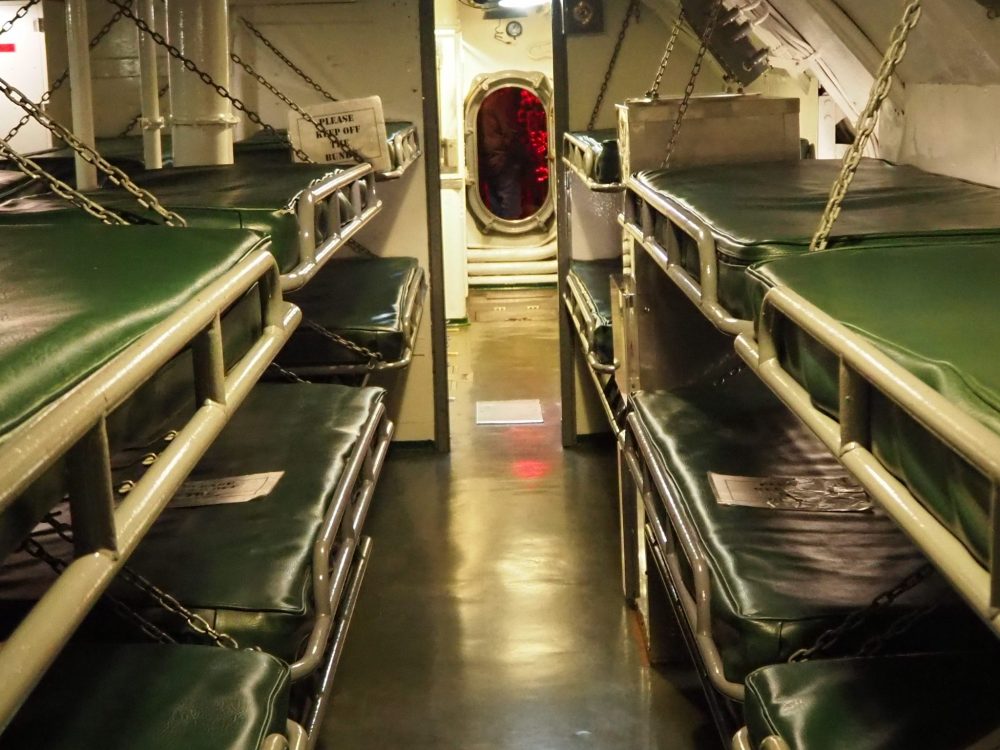 Bunks in the USS Pampanito. You can see one of the oval hatches in the background.

Restored to its 1945 state, the USS Pampanito shows what life was like aboard a submarine during the war. As with my visit to the SS Jeremiah O’Brien, I could easily imagine the long periods of boredom broken by moments of frantic activity and fear: diving to avoid attack, playing cat and mouse with other ships. In both ships, the most evocative places for me were the living quarters: rather roomy on the Liberty Ship, densely packed on the submarine. 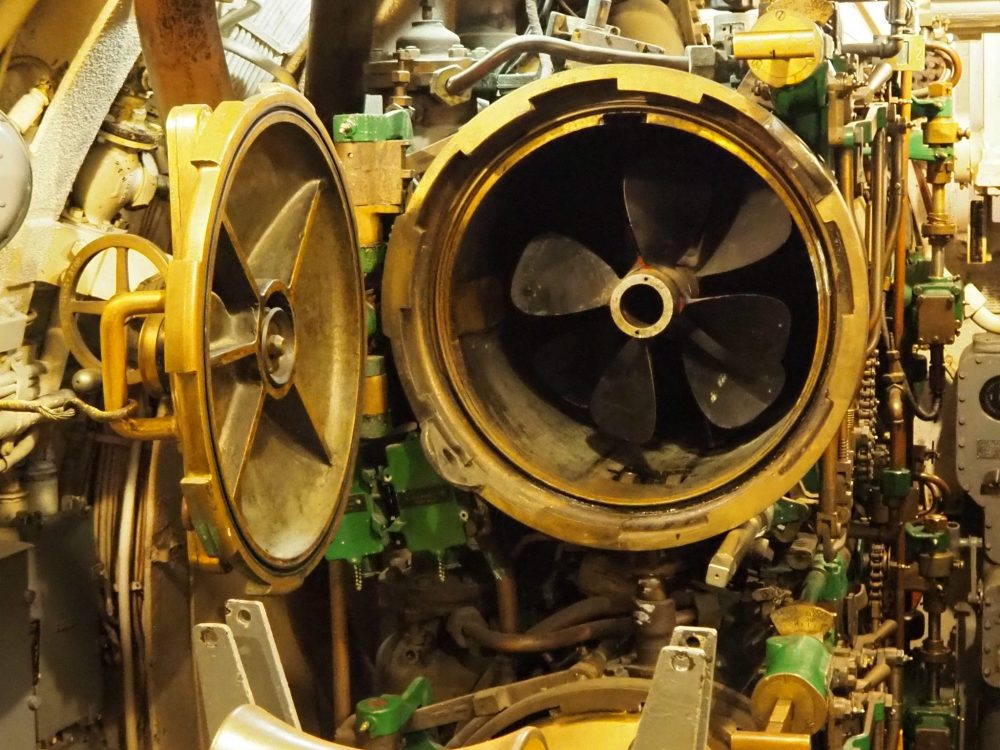 If you like to see historic ships, make sure to walk down the shore toward the Golden Gate Bridge afterwards. The San Francisco Maritime National Historical Park has several older ships and a museum at the Hyde Street Pier.

San Francisco Maritime National Historical Park: Hyde Street Pier, 2905 Hyde Street. The pier is open daily 9:30-17:00, while the Maritime Museum, in the Aquatic Park Bathhouse Building, is open daily 10:00-16:00. Free to walk on the pier and view the ships from outside; free to visit the museum. $10 to board the ships. 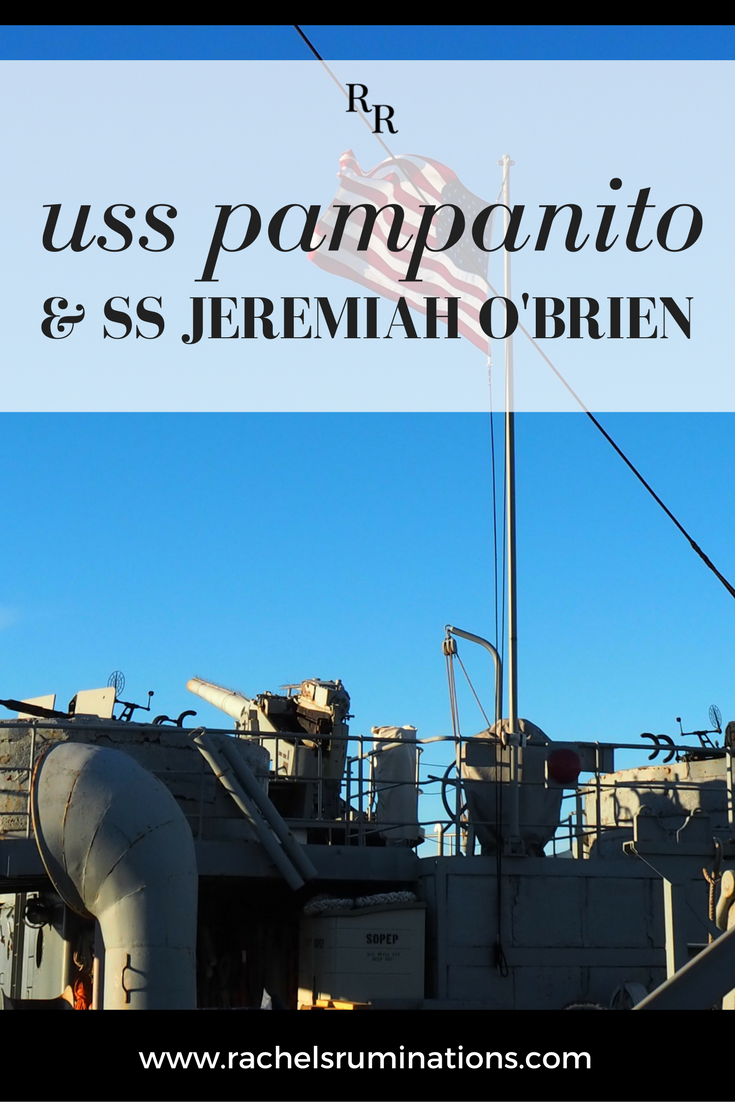 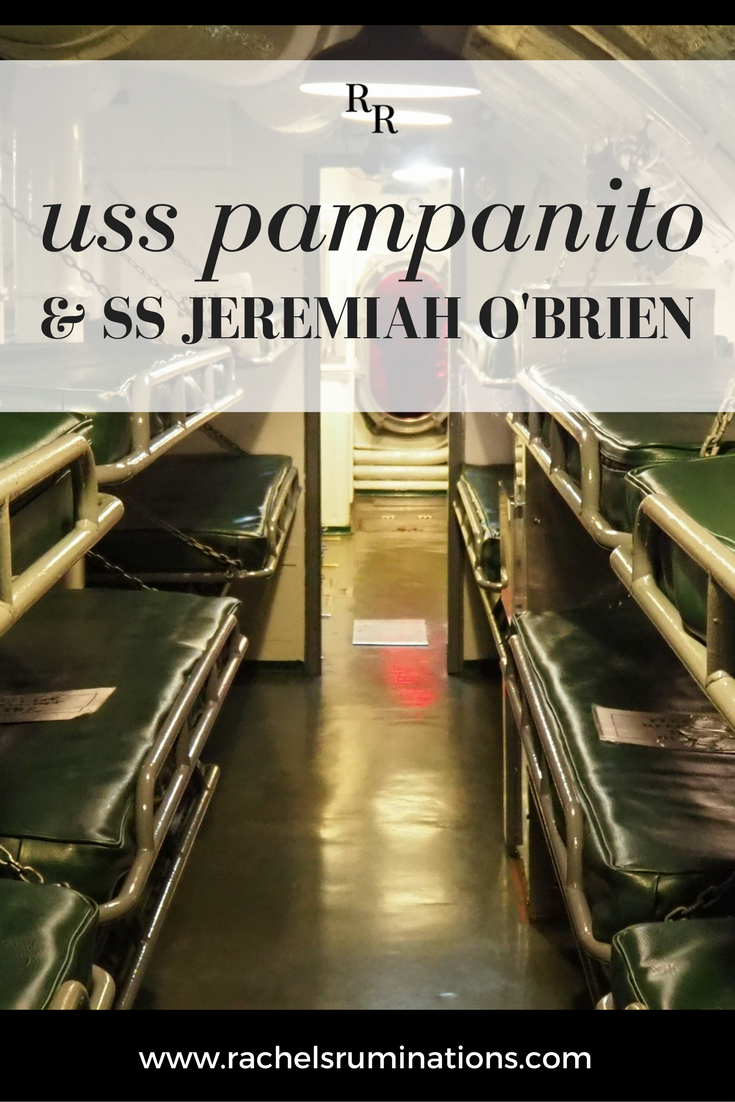 If you don’t have a travel blog yourself, you can still click on any of the blogs below and visit them!‘