When I heard about a museum dedicated to Rosie the Riveter, I had to see it.

Who was Rosie the Riveter? 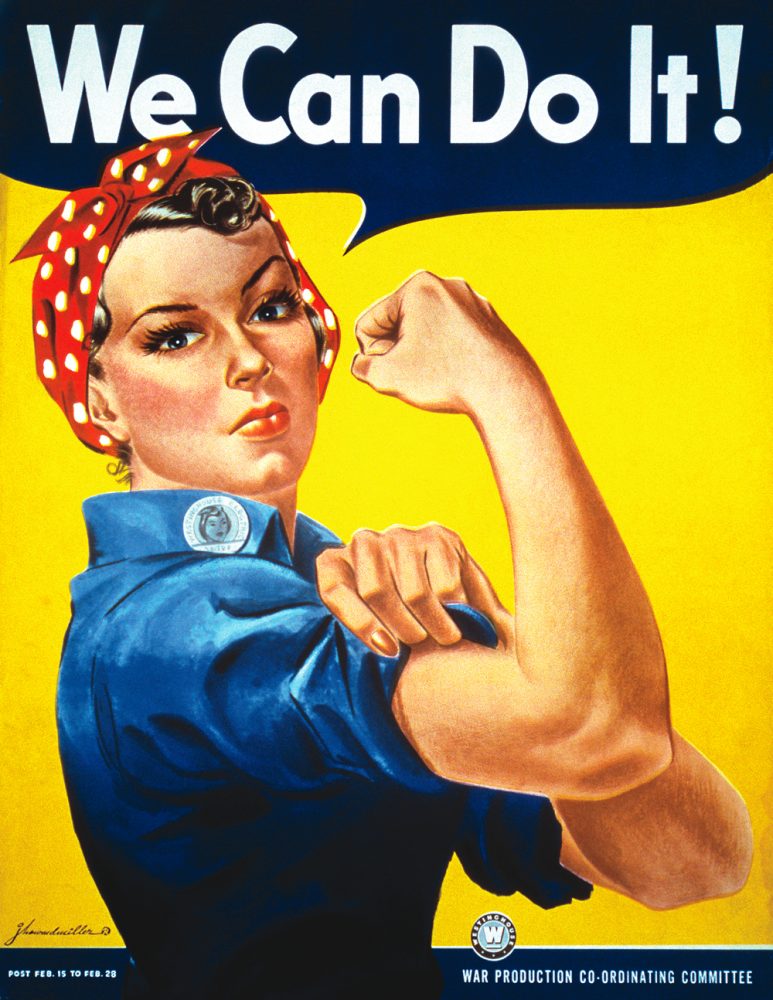 The name “Rosie the Riveter,” according to Wikipedia, was first used in a 1942 hit song, praising an assembly line worker helping in the war effort. The popular image of Rosie the Riveter stems from a World War II propaganda ad, used to recruit women to work in factories to support the war effort. The model was Rose Will Monroe, who worked as a riveter at a factory in Michigan.

The Rosie the Riveter Museum

The first thing you should know about the museum is that it is not easy to get to or to see in its entirety without a car. My daughter and I took the BART train to the end of the line in Richmond, then a taxi to the museum itself. Because the museum has several parts widely separated along a waterfront, we didn’t get to see everything.

The museum itself is in the Visitor Center, tucked away behind a Ford assembly plant that, during the war, cranked out jeeps and tanks for the war effort. 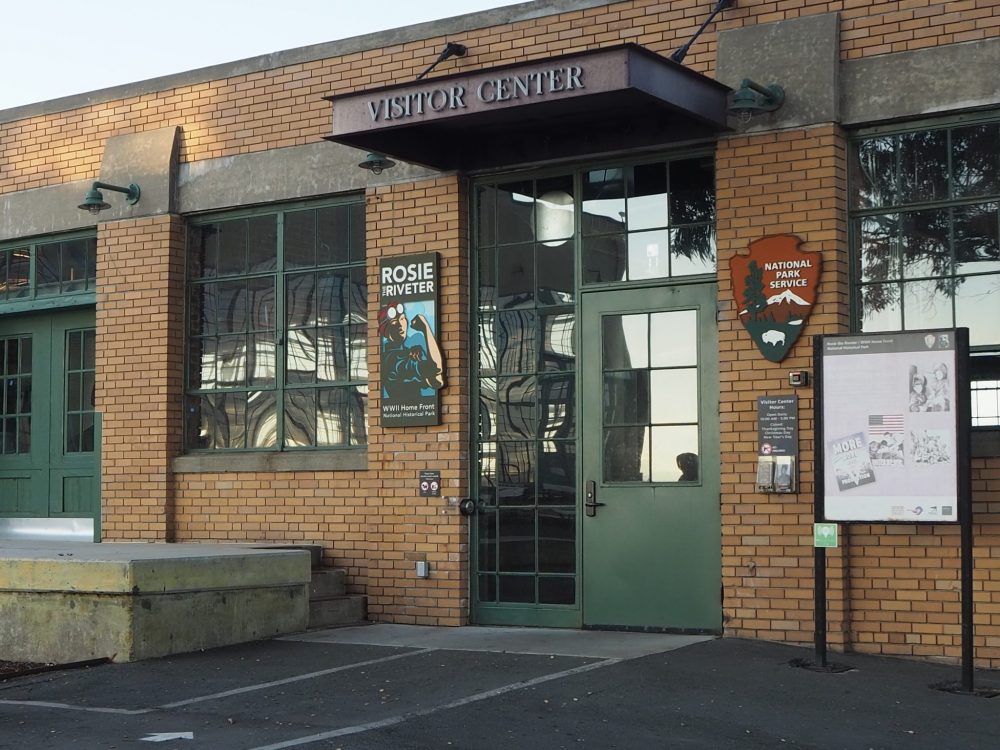 The Visitor Center at the Rosie the Riveter Museum

The two sections within the museum have different focuses. One section looks at the home front in general: how the government mobilized civilians to contribute to the war effort. Besides increasing industrial production drastically, campaigns urged civilians to “Use it up – Wear it out – Make it do – Or Do without.” They planted “Victory Gardens” to increase food production, saved cooking fat to use in making explosives, and recycled metals, to name a few of the campaigns.

This section includes information about Rosie the Riveter: where the image came from, who it was based on, how it was used, and so on. 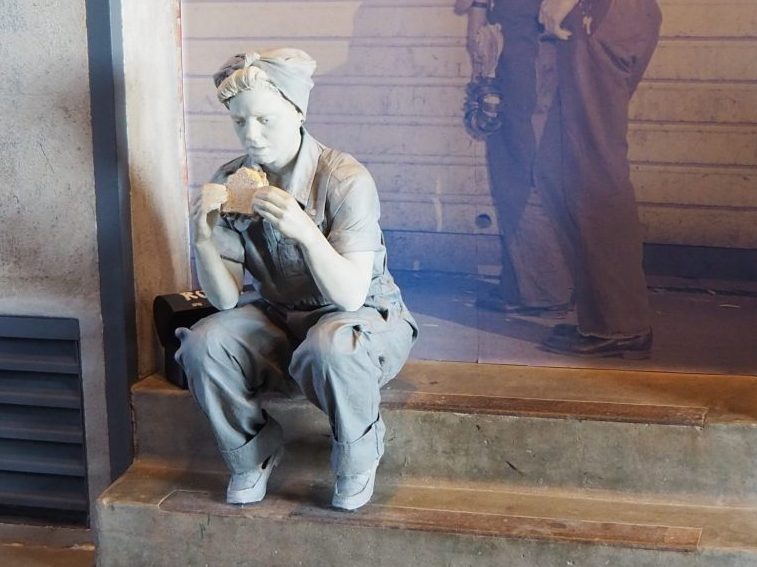 An image of “Rosie” at the Rosie the Riveter Museum

During World War II, many men joined the war effort in combat roles or other work within the military. Industries had already cranked up production even before the attack on Pearl Harbor brought the US into the war. Once the US joined the war, women had to take over jobs in armaments production, but also lots of other war-related, traditionally male, roles. Despite the fact that the factories needed them, they had to prove they were capable of doing the hard physical labor the work demanded.

At the same time, many African-Americans and other minorities gravitated to industrial towns looking for work. At first, discrimination blocked them. In 1941, however, President Roosevelt signed an Executive Order that banned discriminatory hiring in war-related industries. Of course, discrimination didn’t end, but many did get jobs in factories.

When the war ended, many of the women and the minority workers lost their jobs on the excuse that the returning veterans needed them more. Nevertheless, the taste of independence the women had experienced was, for many, life changing. For minorities, their experiences during the war, fighting discrimination by factory management, could be seen as the starting point of the Civil Rights Movement that gathered steam in the 1950s.

The war in Richmond

The other section narrows the focus specifically to Richmond. In the late 1930’s, Henry Kaiser established a shipyard in Richmond to supply ships for Britain. It was one of several sites where the US government decided to build “Liberty Ships” to carry cargo to the troops.

It was interesting to read about the population explosion Richmond underwent as thousands of workers migrated into town, often living in pretty appalling conditions. Workers slept in movie theaters or in cars or tents. It took time before houses and dormitories could be built. Schools had to accommodate a sudden spike in enrollment, and daycare centers popped up as well.

The factories in Richmond worked on assembly-line systems so that workers needed little training. At its peak, the Kaiser Shipyard could produce a ship every two weeks. Over the course of the war, it built 747 ships.

The exhibits in both sections consist mostly of texts and images, sometimes augmented with audio and/or video. Few of the displays are interactive, yet I didn’t get bored. The information is well-presented in attractive small bites, and besides, it’s a fascinating piece of war history that makes the story more personal than the usual stories of battles.

The Rosie the Riveter Memorial 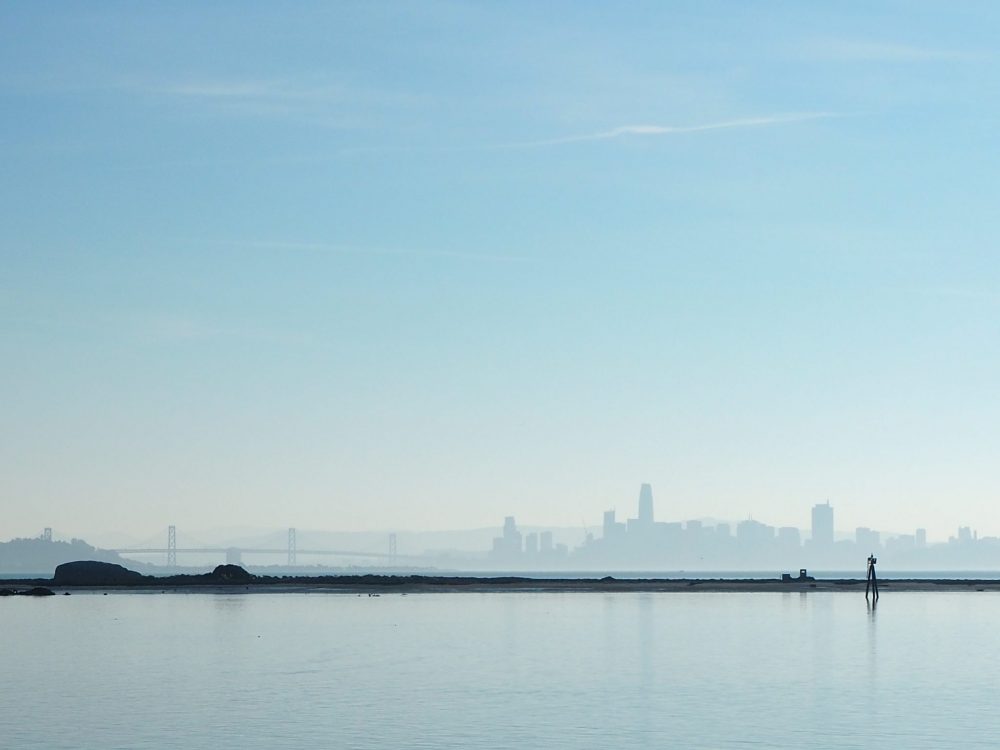 View of the San Francisco skyline from the Rosie the Riveter Museum in Richmond. 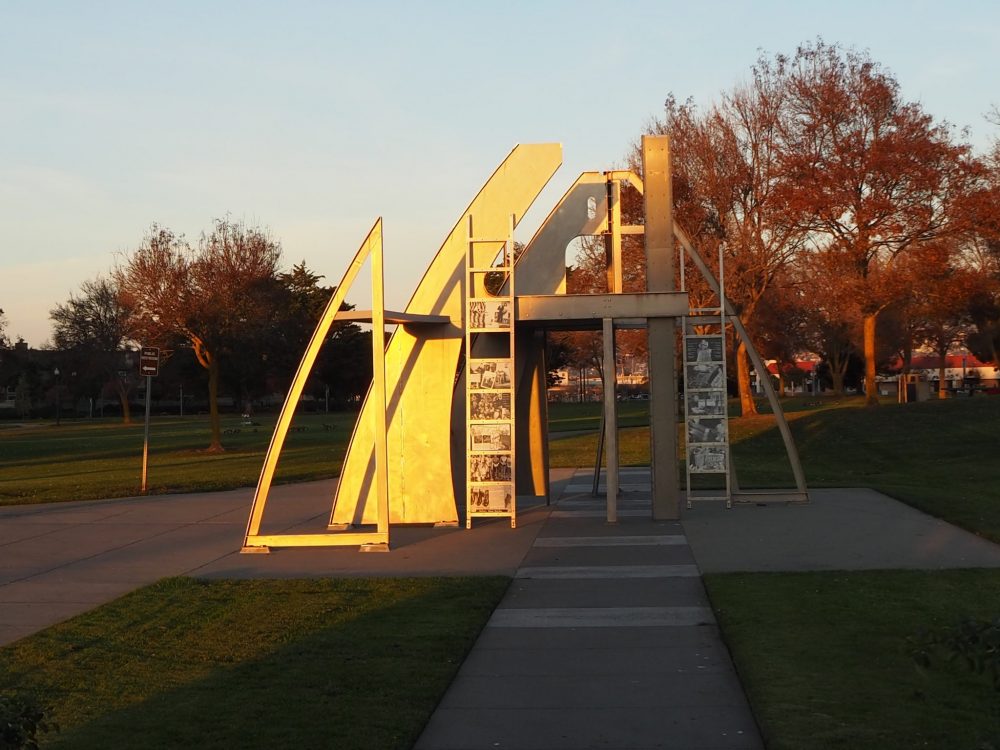 This factory produced 49,000 jeeps and 91,000 tanks and other military vehicles during the war. Various businesses now occupy the building. Inside the Visitor Center museum, however, one exhibit tells about the Ford plant and shows how jeeps were built, then partly disassembled in order to stack neatly. 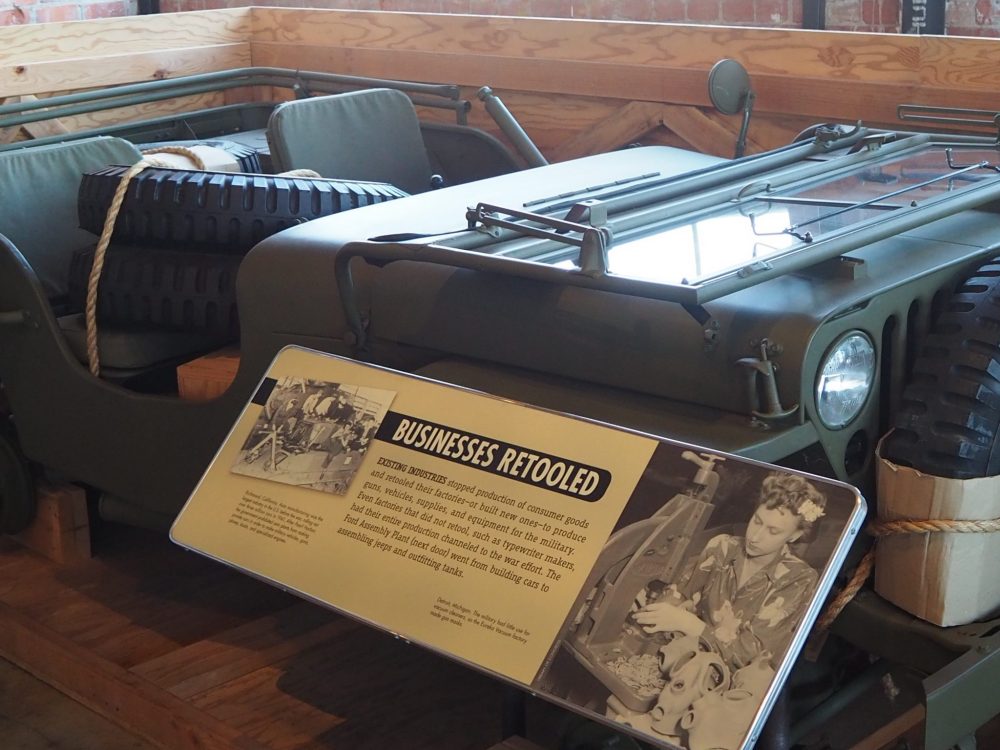 As this display explains, a jeep that is partly disassembled like this can be efficiently stacked for shipment.

Kaiser Shipyard No. 3 and the SS Red Oak Victory

Originally there were seven Kaiser shipyards, one of which, Kaiser Shipyard No. 3, can be visited by car, which is why we didn’t get to see it except across the water from a distance. In any case, visitors can’t actually enter any of the buildings. Instead, you can drive by the buildings and get a view of the drydocks.

The SS Red Oak Victory was built during World War II at Richmond’s Kaiser Shipyard No. 1. A cargo ship, it also served in the Vietnam and Korean Wars. It’s still in the process of restoration, but visitors can tour it. Since it’s not technically part of the National Historic Park, it does charge a fee to enter.

Other sites in Richmond

A number of other sites in Richmond link to Richmond’s role in wartime industry. Most, however, are not open to the public. You can reserve a place on the occasional bus tours covering these sites. Alternatively, pick up a map at the visitor’s center and go see them (only from the outside) on your own.

Check the website ahead of time for events. In particular, Ranger Betty Soskin’s talks are worth planning a visit around. Soskin was one of the African-American “Rosies” in Richmond, and I have it on good authority that her stories are fascinating. 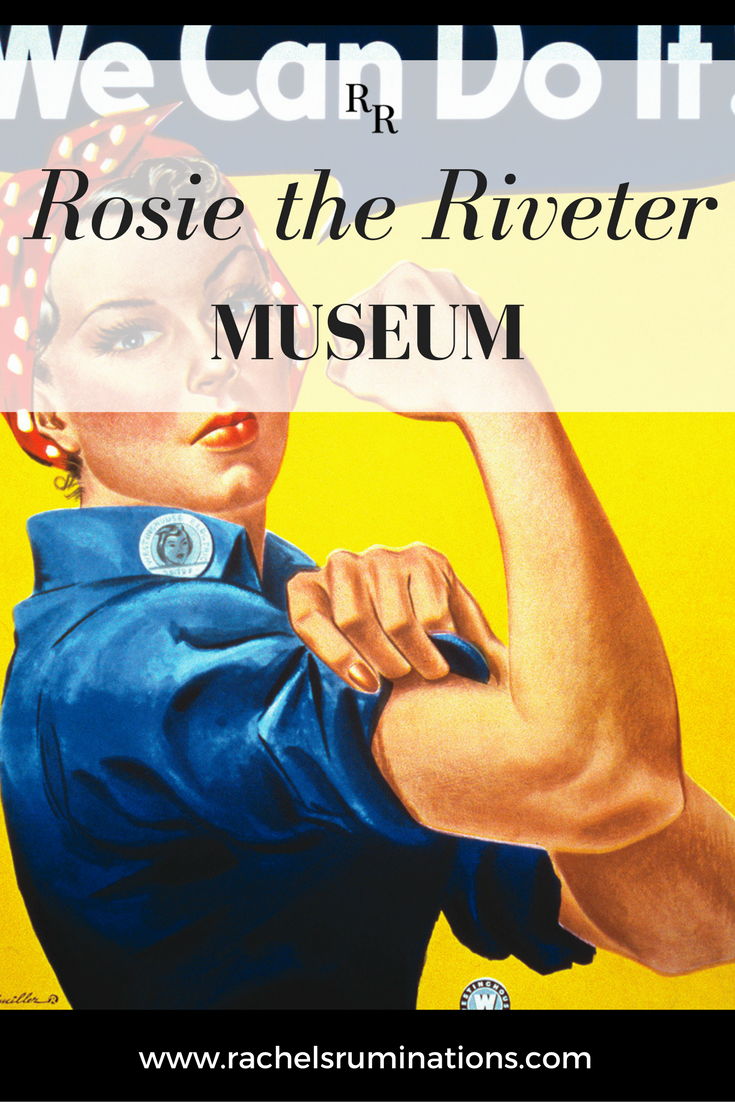 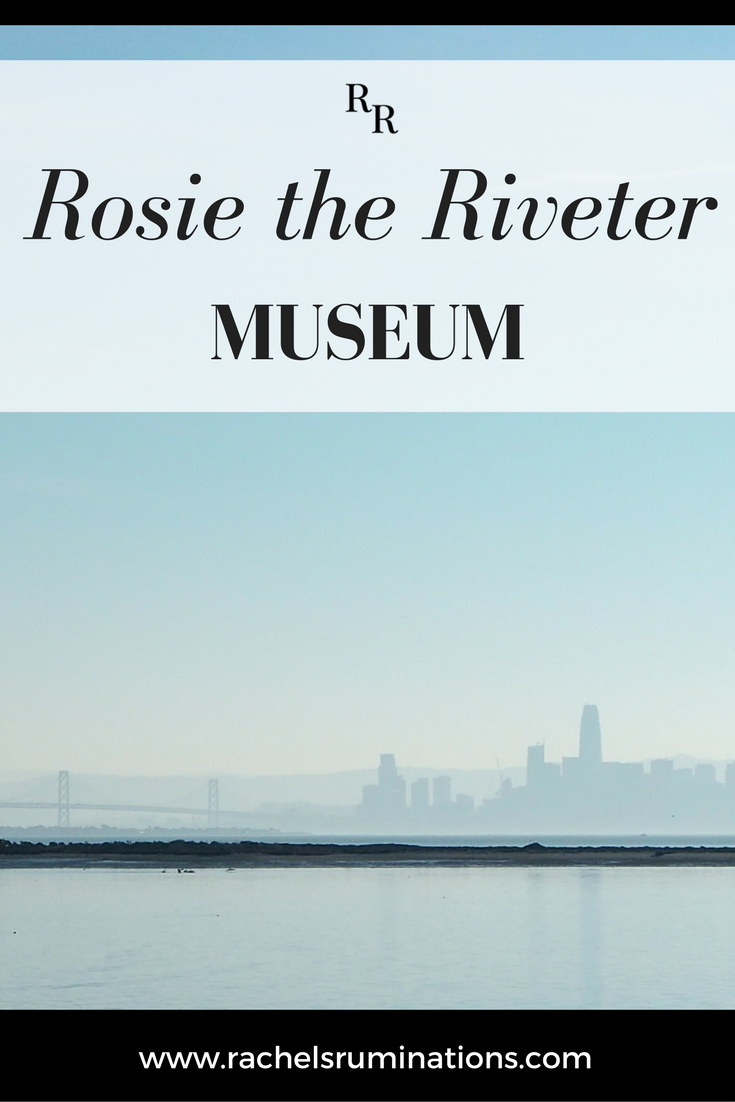 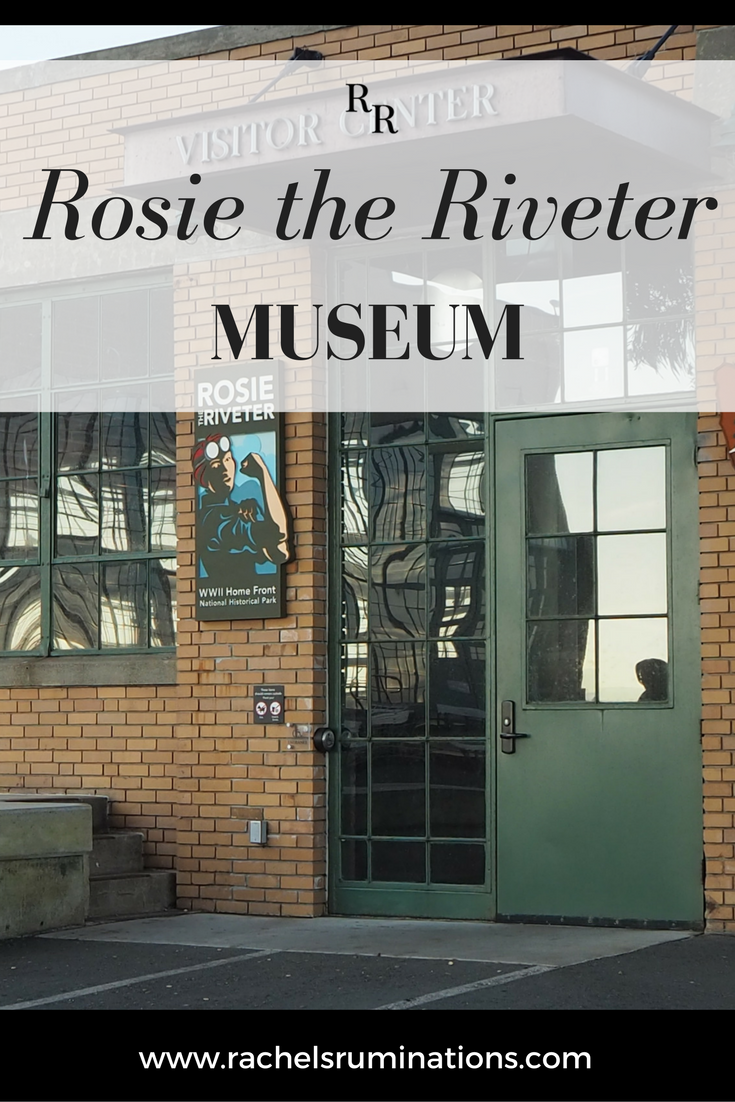